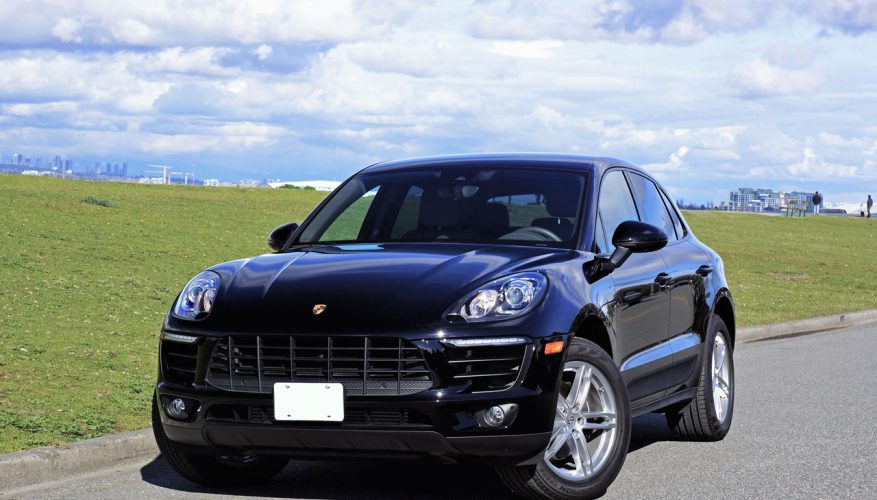 By: Trevor Hofmann
It’s too early to tell exactly why Porsche has improved Macan sales so dramatically since its first full year of availability in 2015 when it sold 2,121 units, to the close of 2016 when its final tally was an impressive 2,800, but its recent ability to target an entirely new audience of entry-level luxury buyers probably had something to do with it.

Enter the all-new 2017 Porsche Macan. No, I’m not talking about the fabulous Macan S and its 340 horsepower 3.0-litre twin-turbocharged V6 that’s been available since the sporty utility debuted as a 2015 model. That trim continues forward into 2017 as one of the compact luxury SUV segment’s quickest and most agile vehicles, but its $61,400 price point, while reasonable for what you get, puts it out of reach of many would-be buyers. Porsche has addressed this issue with a new base four-cylinder Macan that starts at just $54,100, hence the stronger sales numbers.

Yes, it seems hard to believe but you can potentially purchase a new Porsche in the low $50k range if you negotiate a discount, and while powered by a seemingly mainstream VW-sourced 252-horsepower 2.0-litre turbocharged and direct-injected four-cylinder with 273 lb-ft of torque it still pulls off a relatively speedy 6.7-second sprint to 100km/h (or 6.5 with the as-tested Sport Chrono package) before attaining a top track speed of 229 km/h (142 mph). The new engine is actually based on Audi’s latest 2017 A4 2.0 TFSI powerplant, but anyone denying Volkswagen roots is either ill informed or working for a Porsche-financed marketing/PR department. It comes mated to an extremely quick yet smooth shifting seven-speed dual-clutch PDK automated gearbox with aluminum steering wheel paddles, which powers all four wheels via standard all-wheel drive.

Cayenne aside, the Macan is the SUV to buy for maximizing on-road performance. Handling is superb, especially when upfitted with larger rims and tires as was the case with my tester that benefited from a $1,440 set of 19-inch Turbo rims on 235/55 Pirelli Scorpion Verde all-seasons, the only other option added being the $1,500 Sport Chrono package that replaces the regular dash-top clock with a sporty analog/digital stopwatch along the lines of a Breitling Aerospace, Tissot T-Race Touch, Victorinox 241300, or Luminox Pilot Professional, but still unique and original thanks to sequential Arabic numeral markers every five seconds (similar to the Seiko 5 SNK809) instead of the usual “1” through “12” markers and seconds subdial (the subdial on the Sport Chrono clock actually features the hour markers).

The Sport Chrono package also includes a Sport Plus button on the lower console for modulating throttle response, PSM (Porsche Stability Management) and PTM (Porsche Traction Management) settings, adds a special performance display within the PCM (Porsche Communication Management), and provides launch control for the best possible sprint times (and no, there isn’t a PLC acronym for this one), although I can’t see many owners of this base four-cylinder model using the pre-programmed racing start process and motorsport-derived shifting strategy, unless just for a little fun.

Similarly I can’t see a lot of Macan buyers caring too much about fuel economy, which thanks to auto start/stop with coasting capability, kinetic energy recovery, and yet more efficiency technologies is actually quite good at 11.6 L/100km city, 9.3 highway and 10.6 combined. This matters most to Porsche, which relies on its new lineup of four-cylinder models (the new 718 Boxster and Cayman, plus the new base 911 Carreras use fours as well) to reduces its Corporate Average Fuel Economy (CAFE). The new Macan is more of a dollars and cents option (or a dollars and “sense” option), a way for someone otherwise considering an Audi Q5, or some other similarly powered compact luxury SUV, to spring for a Porsche.

Speaking of competitors (and now we can truly name these brands as Porsche rivals), the Macan managed to pass right on by Lincoln’s more affordably priced MKC and Infiniti’s (granted long-in-tooth) QX50 on the sales chart last year, the latter likely to claw its way back after its long awaited replacement debuts this coming fall. Still, the achievement is significant for an SUV that costs considerably more than either of these.

You get a lot for the extra coin, mind you, starting with one of the best balanced chassis in the compact SUV sector, no matter the trim level chosen, as well as arguably attractive Porsche styling (I happen think the Macan is Porsche’s most alluring SUV and one of the more attractive in its segment), and an extremely well made interior filled with more high-quality pliable surfaces and premium trims than the majority of challengers.

Even the base Macan covers the seats in soft genuine feeling leatherette with even softer Alcantara psuede inserts, while the leather wrapping the steering wheel is even more upscale. The shape of the rim is as good as sport steering wheels get too, while the aluminum-accented twinned-three-spoke design is gorgeous and switchgear superbly executed (the heatable steering wheel button is cleverly hidden between the two prongs of the centre spoke). The rest of the cabin gets satin-finish aluminum trim in key places, enough buttons and toggles down the centre and overhead consoles to make an ’80s Nakamichi tape deck buff drool (that would be me).

Speaking of latest tech kit, the Macan’s state-of-the-art digital interfaces are also notable. The primary gauge cluster remains a mostly analog affair, other than a neatly integrated high-resolution TFT colour multi-info display where the right dial used to go in older models. The overall design stays the same, however, which is probably a good thing for Porsche purists (they pout a lot when Stuttgart messes with traditional stuff like… anything), but the PCM touchscreen is larger at seven inches and includes some impressive features like proximity sensing with digital buttons that pop out when your fingers come close, plus tablet style multi-touch gestures, and Apple CarPlay (sorry Android users, Porsche doesn’t believe you’re the types of folks that would be interested in its vehicles despite the fact you dominate pricey smartphone sales globally).

Personally, I think Porsche will rethink this choice by next year, especially if it wants to make more headway in emerging markets like China that are leading global smartphone purchasing (Huawei, Oppo, and BBK are some of the fastest growing brands). According to American IT research and advisory firm Gartner.com, as of the fourth quarter of 2016 99.6 percent of all smartphone sales were Android and iPhone, but of the 432 million smartphones sold in the last quarter, 352 million ran Android (81.7 percent) and 77 million ran iOS (17.9 percent). As many who buy into the premium auto sector will already know, Apple missed its 2017 Q1 earnings targets due to (slightly) sluggish iPhone sales and its stock dropped, dragging down the entire index for a day (not so for Google), so Porsche may consider getting with the “Evil Corp” program instead of snubbing most of its potential customers.

On the positive the new PCM is a marked improvement over the outgoing system that was riddled with problems, especially its navigation system that was downright comical at times (once it placed us in the middle of my city’s largest river some 30 km away, while we were actually parking six floors underground within the city’s centre, whereas other times it just got lost). No such problems with the new navigation, which worked flawlessly in my previous Macan GTS tester (it’s not included here) despite not incorporating Google Maps (sorry, couldn’t help it).

Porsche also provides new placement for its powered USB port so it’s easier to plug in your smartphone, while Wi-Fi and on-board 4G LTE internet are now on the menu. Lastly, the new system allows for remote mobile device-to-vehicle connectivity via a downloadable app.

Another 2017 bonus is completely revised rear-seat entertainment including a set of monitors attached to the backside of the front headrests, multiple HDMI and USB ports, and an SD card reader, while music and video can be streamed into the system via the same 4G LTE/Wi-Fi system.

That last bit is the real gist of the Macan. It’s well known for performing better than most competitors, especially in upper trims, while no one should try and argue against its build quality without fear of losing face, or for that matter its list of available features that could fill a book, but when discussing Porsche’s entry-level ute most don’t talk practicality, which it has in spades. It’s really a comfortable SUV capable of packing in five sizeable adults and a considerable amount of gear, and when you need to haul something home from the hardware store it complies with more cargo volume than its sleek exterior styling should allow. The luggage compartment is as nicely finished as anything in the class too, with premium carpeting on the load floor, on the backs of the rear seats, and up each sidewall, chromed tie-down hooks in key positions, and useful elasticized webbed netting all over.

If this were my personal ride I’d probably want to add a few extras, such as the $7,250 Premium Package Plus that comes with adaptive cornering HID headlights, proximity access and pushbutton ignition, auto-dimming side mirrors, 14-way powered memory seats with ventilation up front and heatable outboard seats in back, a panoramic glass sunroof, and 14-speaker 200-watt Bose surround audio. The $1,960 Connect Plus package would be tempting too, due to the 4G LTE and Wi-Fi mentioned earlier, as well as real-time traffic information, navigation with useful info such as news, weather, flight details, portal POIs, etcetera, nav map updates, Porsche Connect App Services (that actually includes Napster-seriously, I didn’t think Napster still existed let alone was relevant enough to mention), Car Connect Services, Online Destination Search using Google (yes, they pay some tribute to E Corp), and (sigh) Apple CarPlay (enough said).

There are so many other possibilities, but I’ll leave it to you to visit Porsche’s website or your local dealer to figure out what fits your needs and wants more specifically. No matter how you detail out your Macan I believe you’ll like the finished product. I was surprised how much fun this new base four-cylinder model was to drive, and was once again impressed with how well it was finished inside and out.

Porsche’s sales are growing for good reason, with April 2017’s 830 deliveries outpacing the same month last year by 10-percent for the brand’s strongest sales month ever. At 407 units the Macan made up almost half of that number, and was easily Porsche’s bestselling model. At 1,206 units year-to-date it more than doubles the next-best Cayenne’s 579 sales, the two making a solid statement that SUVs rule the luxury sales charts.

Now, thanks to the new Macan four-cylinder, a Porsche is easier to obtain than ever before. I recommend you take a closer look.
©(Copyright Canadian Auto Press)
Car Shopping Tools