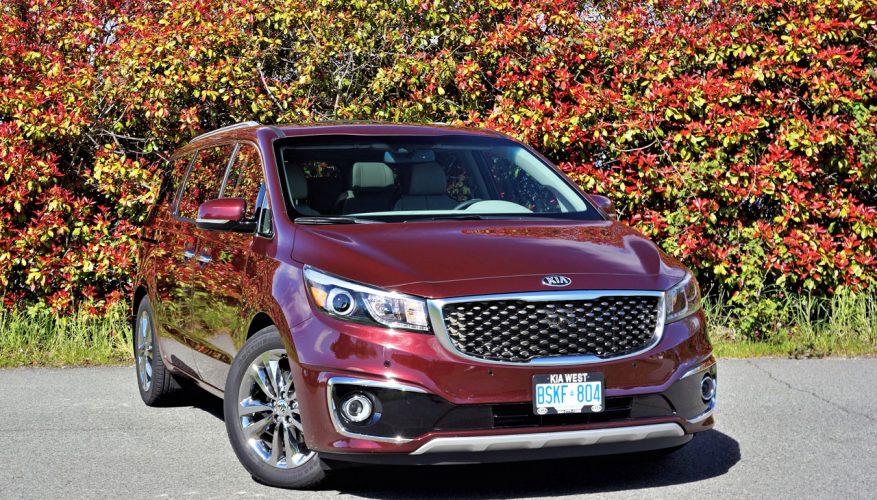 How I love minivans! Well, maybe the love is about what I can get done when I’ve got a minivan at my beck and call, than actually loving minivans. Still, I think most will agree the Sedona goes about its practical business with a lot more style than most.

It helps that Kia gave me a luxury-lined SXL+ model, which is outfitted about as nicely as anything in the class comes. OK, it’s not as tarted up as a full load Pacifica, but its as-tested $46,895 window sticker doesn’t shock the senses as much as the $58,480 2017 Pacifica Limited I put through its paces recently. I believe the Pacifica is worth the extra money, but this Sedona is also worth every penny and more.

Kia’s minivan enters the 2017 model year with no new additions and one notable subtraction, the elimination of the SX trim line. Fortunately the new model doesn’t suffer from any lack of options, its available trims still including L, LX, LX+, SX+, SXL, and the SXL+ model currently in the garage.

It’s an attractive van no matter the money spent, the Sedona’s long nose, bold grille, sporty fascia detailing, low profile, and wide, solid stance making it look more like a seven-passenger crossover SUV than anything van-like. Of course, the side sliders give away its pragmatic roots, but that’s about it.

A 276 horsepower direct-injection 3.3-litre V6 with 248 lb-ft of torque comes standard too, mated to a six-speed automatic with a Sportmatic sequential shifter, while optional Drive Mode Select offers Comfort, Eco and Normal modes. Base models get 17-inch rims, but my SXL received chrome-finished 19-inch alloys for a nicer look and better road holding, but like usual I’ll leave comments about driving dynamics to my upcoming review.

There are additional features that set the top-line Sedona apart from its peers, but I’ll delve into these when I pen my review. Until then, watch this page for our detailed review and massive photo gallery, as this high-value minivan might just be your next family hauler…