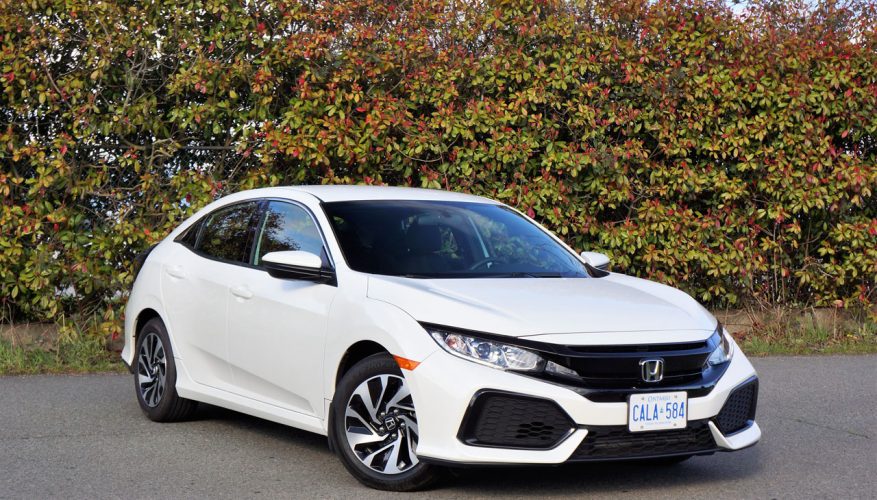 Is that a Honda Civic with four doors and a hatch? You saw that right. Odd that Honda took so long to re-enter the compact hatchback market it helped create way back in the late ‘60s and made popular in the ‘70s and ‘80s, but the Honda Civic Hatchback is back and better than ever, if somewhat controversial looking.

Yes, the new Civic Hatchback is a love-it-or-hate-it design that at the very least will turn heads. Its frontal styling pulls equal cues from the four-door Civic Sedan and two-door Civic Coupe, while its rear design melds some of both models’ key elements into one totally unique shape.

Honda gave us a base LX model to play with for our weeklong test, but for some reason they chose not to include its entry-level six-speed manual gearbox and instead gave us its continuously variable transmission (CVT). Unlike the Civic Sedan, all trims can be had with both transmissions, except those with the Japanese brand’s impressive suite of Honda Sensing active safety features, but then again all trims can be had with or without these upgrades so you’ll have the choice of optimizing performance or accessing the latest in semi-autonomous driving capability.

Also unlike the Civic Sedan, the Hatchback gets one single turbocharged and direct-injected 1.5-litre four-cylinder engine as standard. It makes 174 horsepower and 167 lb-ft of torque in the LX, although in the CVT model we tested the torque drops to 162 lb-ft, while second-rung Sport and top-line Touring trims get a 180 horsepower version of the engine that puts out 177 lb-ft of torque. Once again, CVT equipped models utilizing this loftier engine are detuned to achieve just 162 lb-ft of torque, but the engine is lively either way so no one should complain. An easy way to tell the zestier engine from the Hatchback’s exterior is a dual centre-mounted exhaust pipe at back, and its owners filling up with pricier premium fuel to extract all its potential.

Even base LX models should impress compact buyers thanks to a colour multi-information display within the advanced primary gauge cluster, and a large 7.0-inch infotainment touchscreen on the centre stack filled with high-grade graphics plus Apple CarPlay and Android Auto. A multi-angle backup camera is included standard too, as is Wi-Fi tethering and other high-tech features, while additional conveniences include auto on/off headlights, single-zone automatic climate control, heatable front seats, and more.

I’ll fill you in on Sport and Sport Touring trims in my upcoming road test review too, and let you know my real world experience with interior roominess front and back, and how well the seats fold to maximize the car’s impressive 1,308-litre maximum cargo capacity.

At $21,390 the Civic Hatchback offers a lot for the money, but a number of new hatchback challengers now join the full assortment of competitors already vying for your hard earned cash, so stay tuned to find out if this newcomer deserves your full attention…