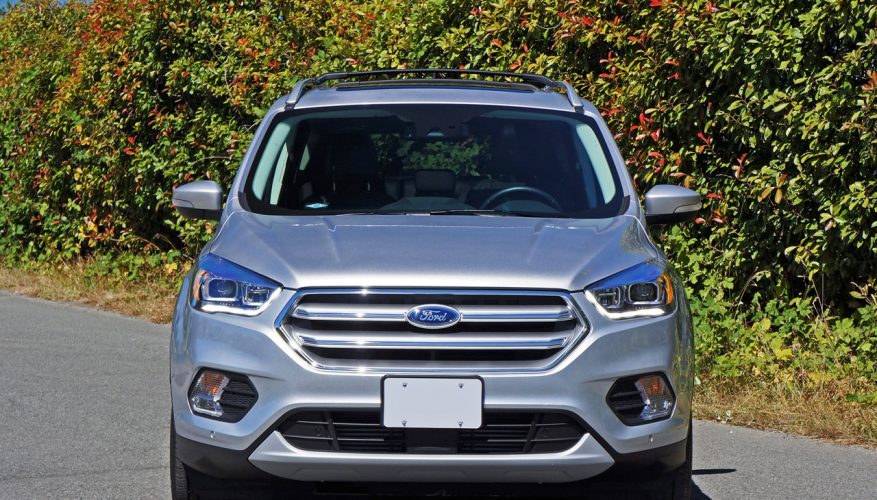 By: Trevor Hofmann
Ford gave its popular Escape compact crossover SUV a major update for this 2017 model year, making it look like a smaller Edge in the process. This will be good news if you like Ford’s mid-size five-seat SUV, but I must say the Escape has certainly lost some of its unique character after swapping its unorthodox grille-less façade for a more commonplace six-sided grille design.

It seemed like longer, but the third-generation Escape has only been with us since 2012. That model wasn’t exactly grille-less, but rather had less of a grille than the rectangular egg crate design attached to the more upright, boxier SUV that preceded it, the 2013 through 2016 model featuring a narrow slit just under the lip of hood, followed by a fairly large opening below the bumper that extended to each side in triangular grillettes.

By comparison the new model is much more conventional, which just might appeal to more compact SUV buyers. Along with changes to its front fascia, the 2017 Escape also gets a new hood and redesigned headlight assemblies, plus subtly reworked taillights that form into a reshaped liftgate that looks as if Ford simply pasted some plastic cladding overtop the old tailgate. It works, giving the SUV’s rear design a little more complexity while creating change, even if only for the sake of change.

Let’s face it. We all want something new. Not only new to us, but fresh enough on the market to get noticed. The new 2017 Escape should do that well enough, and more so its interior update should satisfy current owners who are happy with its general layout while providing ample change for those bored with the status quo. A quick glance at the dash design, primary instruments, door panels, centre stack, infotainment display, switchgear, overhead console, and even the seat upholstery might leave you thinking little to nothing has changed inside, but closer inspection brings to attention a new steering wheel with thinner spokes, and a completely redesigned lower console that moves the shifter rearward to provide easier access to a new HVAC interface and a new media bin just below, which houses a USB port and a 12-volt power outlet. The pièce de résistance is a new electromechanical parking brake that replaces the old-school handbrake atop that lower console, while a better set of cupholders join new storage bins and a larger centre armrest, completing the lower console updates. The glove box looks the same as last year’s, but Ford created a new “swing-bin” design to make accessing stored items easier, while lastly my as-tested Titanium loaner’s seat upholstery is now more similar to the old SE trim’s horizontally ribbed design albeit covered in leather, while light grey contrast stitching is used liberally.

I’m sure there are those who will knock Ford for providing a mid-cycle makeover when this five-plus year old model should really have received a full fourth-generation redesign, but a considerable drop in sales over the past two years and even more significant plunge in popularity may be more accurate satisfaction index markers.

Things started to unravel for Ford at the close of 2016 when the Escape lost its top placement to the RAV4 with just 46,661 sales to the Japanese brand’s 49,103, while CR-V deliveries grew to 44,789 units and the Rogue finally eclipsed the 40k barrier to 40,055 units, while the first three months of 2017 have seen the Escape’s sales slow to 8,932 units and all three import brands hustle right on by albeit a changing of the guard up top with the RAV4 now in third with 9,979, the CR-V in second with 10,465, and the Rogue ahead for the first time ever with 10,481 sales. There’s no way of knowing which model will rise to the top after four quarters are accounted for, but it appears clear the fourth-place Escape won’t be leading the charge.

If you’ve been thinking this prologue would somehow segue into an all-out Escape bash, that’s not my intention in the slightest. In fact, I’ve long been a fan of the Escape and the new model hasn’t lost any of its shine. Certainly it’s up against a number of more recently redesigned models, reason enough for its sales to slip, but the third-generation Escape has been much more advanced than its rivals for so many years that it didn’t need as many changes to bring it up to snuff. Like I said before, much of what’s been done is change for the sake of change, Ford understanding that the market isn’t only driven by needs, but by wants too.

To be clear, some key features most of its competitors changed with their redesigns remain the same with this newer Escape, particularly its longtime use of high-quality soft synthetics on commonly touched surfaces, its carryover TFT colour multi-information display within the primary gauge cluster, and its large Sync 3 infotainment touchscreen already boasting some of the industry’s best graphics and fastest speeds, now updated with Apple CarPlay and Android Auto.

I’ve always liked the way this third-gen Escape drove, and now for 2017 it’s even better thanks to a lot more power from its redesigned engine lineup. I can only comment directly about the top-line 2.0-litre twin-scroll turbocharged and direct-injected four-cylinder that I drove, its output up 5 horsepower to 245 and torque bumped up by a much more significant 44 lb-ft to 275 for a much more energetic launch from standstill and superb highway passing power.

Take note, none of the Escape’s top-four rivals come close to matching this level of performance, and while its six-speed SelectShift automatic isn’t quite as advanced as some in the class, it’s a lot more engaging than competitive continuously variable transmissions (CVTs), plus its plenty smooth shifting and proven reliable. It features standard auto start/stop for 2017 too, helping front-wheel drive models achieve a claimed 10.6 L/100km in the city, 8.0 on the highway and 9.4 combined, and four-wheel drive examples manage an estimated 11.5 L/100km city, 8.7 highway and 10.2 combined.

Of note, the updated Escape makes a new mid-range 1.5-litre turbocharged engine available that puts down a bit more power than its 1.6-litre predecessor while eking out even better mileage, the former at 179 horsepower and 177 lb-ft of torque and the latter at 10.2 L/100km city, 7.8 highway, 9.1 combined with FWD, or 10.7 city, 8.3 highway, and 9.6 combined, while the base FWD-only model’s 2.5-litre four-cylinder powerplant soldiers forward with a still respectable 168 horsepower and 170 lb-ft of torque and a hardly thirsty 11.1 L/100km city, 8.1 highway, 9.8 combined rating.

Along with its strong straight-line acceleration the Escape Titanium’s MacPherson strut front and double lateral link semi-trailing arm rear suspension delivers a wonderful combination of taut handling and composed comfort, even with its optional 19-inch machined-aluminum alloys on 235/45 Continental ContiProContact all-season rubber. When pushing hard through some circuitous rural backroads near my suburban home the Escape Titanium AWD held its lane confidently, Ford even providing steering wheel paddles to maximize driver engagement. I was therefore able to keep engine revs in their sweet spot by holding a given gear, ideal for powering out of corners, downshifting ahead of sharp curves, and generally making the most of the little SUV’s available performance. Try that with one of its CVT-equipped rivals and you’ll be underwhelmed.

All the while the Escape Titanium’s 10-way powered front seats held my partner and me in place securely, the leather not as grippy as cloth (or the optional partial leather and fabric sport seats), but ample side bolstering kept our backsides from sliding around and the three-way heaters made sure we were warm from the inside out. The Titanium’s tilt and telescopic leather-wrapped multifunction steering wheel is heatable too, while those seats also include memory, as do the side mirrors that are power-adjustable, heatable, and feature integrated turn signals and puddle lamps.

If Ford left the top-line Titanium there it would be easy to poke holes in its lack of options, but fortunately you can deck it out with enough to make a person question why a premium badge is necessary at all, my Ingot Silver painted example potentially available with seven alternative colours, Ruby Red adding $450 to the bottom line and White Platinum $550, whereas four-wheel drive adds $2,200, and those 19-inch alloys pushed the price up by a very reasonable $650.

My tester included standard Charcoal Black full leather upholstery, although Medium Light Stone grey is a no-cost option, whereas $150 worth of all-weather floor mats kept its carpets clean, a fabulous twin panel panoramic glass sunroof made everything open and airy for $1,750, extremely accurate navigation made sure we got where we wanted to go for just $800.

Tech in mind, another upgrade I really appreciated was the $1,750 Titanium Technology Package (301A) that includes auto high beams for its upgraded HID headlamps, rain-sensing wipers, forward and side sensing, lane keeping assist with driver alert, and updated semi-autonomous self-parking capable of steering the Escape into perpendicular slots as well as parallel spots. Additionally, the Escape’s steering wheel wasn’t updated just for style, but now includes the option of adaptive cruise control switchgear, a $1,350 system that also includes autonomous forward collision mitigation.

If this near loaded 2017 Escape included more advanced headlamps (many of its peers include full LEDs with cornering capability) and managed slightly better small overlap front crash protection (it gets an Acceptable score instead of Good) it would likely earn an IIHS Top Safety Pick rating, but as it is it gets top Good marks in all other crash tests and the NHTSA gives it five stars in its overall safety rating system.

All in all the Escape remains one of the better compact SUVs in its class, with a roomy interior that’s more than adequate for carrying big cargo thanks to 964 litres (34.0 cubic feet) of space behind its rear row, that’s expandable to 1,925 litres (68.0 cubic feet) when its 60/40-split seatbacks are folded flat (it can tow up to 1,587 kilos when the $500 Class II trailering package gets added too). That’s not quite as much cargo capacity as a RAV4, Rogue or CR-V, and the seats don’t fold as easily as the latter model’s due to no rear levers integrated into the cargo compartment sidewalls (you need to walk around to the side doors to lay them down), but even base 2.5- and 1.5-litre turbo Escapes perform similarly to these competitors when they’re full optioned out, while there are many other attributes that make the Escape stand out above its peers as well.

In the end, the Escape wouldn’t sell so well if it didn’t measure up. Consider for a moment that even with it slipping to second in its class last year and more recently fourth, it’s still more popular than 12 of its compact SUV competitors, and by a very wide margin. If you’re in the market for any one of the vehicles mentioned in this review, I recommend you spend some quality time with the latest Escape. It didn’t become so popular by accident.
©(Copyright Canadian Auto Press)
Car Shopping Tools