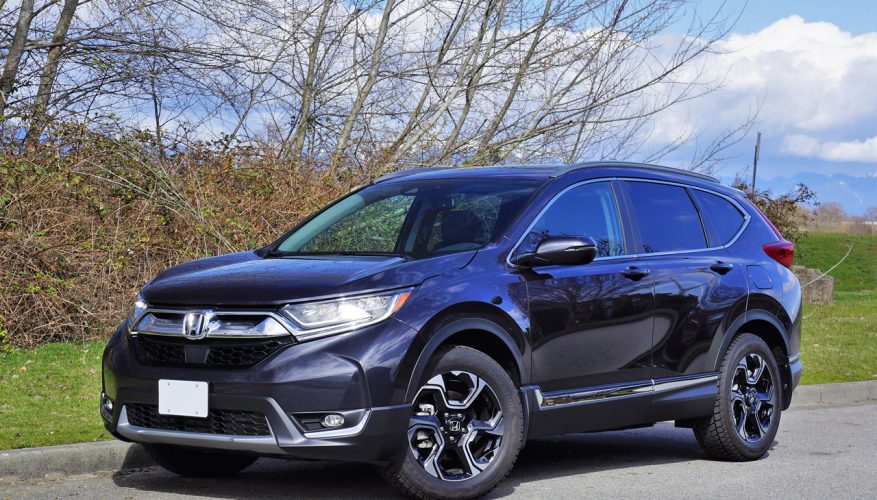 Have you seen the new CR-V yet? Honda’s compact SUV is so popular it would be difficult to miss. Our top-tier Touring tester shows significant progress over its predecessor, but not just because of its bold new styling.

This fifth-generation CR-V rides on a totally new platform shared with the 10th-gen Civic, while its sole powertrain is also pulled from Honda’s bestselling model. The 1.5-litre turbocharged four-cylinder makes 190 horsepower and 179 lb-ft of torque in the CR-V, resulting in spirited yet fuel-efficient performance, a standard continuously variable transmission (CVT) especially helpful in achieving the latter dynamic with an estimated five-cycle Transport Canada fuel economy rating of 8.4 L/100km city and 7.0 highway in FWD, or 8.7 and 7.2 respectively in as-tested AWD.

While engine performance, road-holding and ride quality have all improved, the biggest changes come in interior refinement and roominess. We won’t go into detail right now, but suffice to say Honda has enhanced the CR-V’s interior design and quality to similar levels as its superb new Civic, while the more comfortable SUV will fit larger occupants and more cargo.

Our top-line Touring trimmed tester upped the ante with full LED headlights, unique 18-inch alloy wheels, additional chrome trim, and dual exhaust pipes, while proximity-sensing access including a hands-free tailgate gets you inside where you’ll find convenient rain-sensing wipers, a navigation system with turn-by-turn directions, better sounding nine-speaker audio (thanks to a subwoofer), a larger panoramic sunroof, and more.

The new CR-V helped Honda claw back first place in the compact SUV segment from the Toyota RAV4 over the first two months of 2017, the RAV4 having earned the position during calendar year 2016, although last month saw Nissan’s new Rogue top the segment’s sales chart for the first time. This race is hardly over, with the competition as fierce as it gets and the new CR-V easily up to task. We’ll tell you how the new Honda rates in an upcoming review (not to mention how the new 2017 Rogue SL AWD Platinum and 2017 RAV4 Platinum compare in separate reviews), and let you in on any new developments in the sales race.