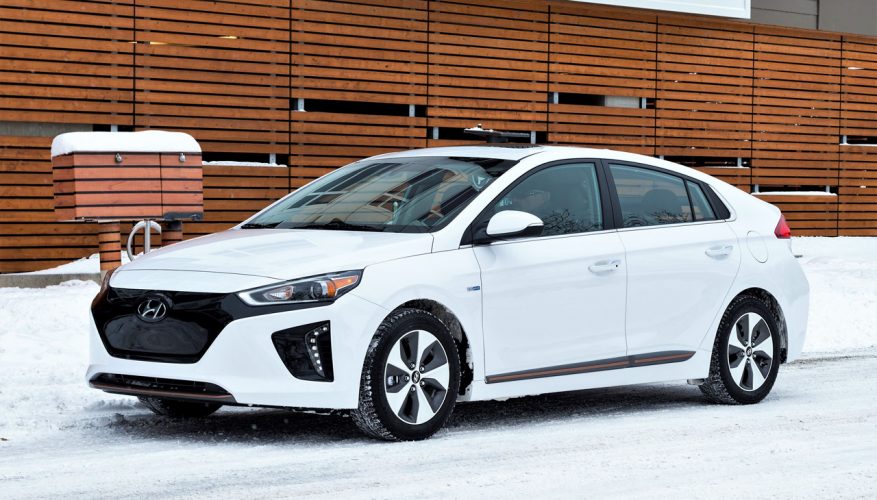 By: Brian Armstead
High technology is rapidly shaping the automobile industry’s present and future. Where there were powerful V8 engines, some have been replaced with turbocharged six- and even four-cylinder powerplants. The result has been V8 horsepower numbers with smaller, fuel-saving engines. One automaker’s bet that hydrogen will power future vehicles is hedged by another manufacturer’s commitment to electric power. Be it smaller displacement engines or alternative propulsion, the Earth will run dry of fossil fuels someday, so manufacturers are prepping for the future.

“Ioniq will attract an entirely new group of eco- and efficiency-oriented buyers in the U.S. market,” said Mike O’Brien, vice president of Corporate and Product Planning, Hyundai Motor America. “With outstanding powertrain flexibility, design, connectivity, and advanced technologies, Ioniq meets the needs of a large and growing group of buyers needing a highly efficient, enjoyable to drive, low-emissions vehicle without compromise to their daily lifestyles.”

Choose between Hybrid, Plug-in Hybrid and Electric power for the new Ioniq. All three are impressive, but try this out for size: The Ioniq Hybrid ‘Blue’ model has a five-cycle Transport Canada-estimated 4.1 L/100km combined rating, the highest rating of any non plug-in hybrid vehicle sold in Canada. That’s 0.5 L/100km better than the platform offered in corporate cousin Kia Niro, which shares some parts with the Ioniq and returns 4.6 L/100km combined. Ioniq Limited and SEL trim levels return 4.3 L/100km combined. All three powertrains are grouped under Hyundai’s BlueDrive moniker.

The Ioniq Hybrid and Ioniq Plug-in feature a six-speed dual clutch transmission to differentiate it from most hybrid cars built by other manufacturers that use continuously variable transmissions (CVT). Cars with CVTs are notorious for wind up, rubber band-like acceleration characteristics. With the six-speed transmission, Ioniq drivers can select Sport or Eco modes. Sport mode holds lower gears longer and combines power from the gas engine and electric motor for maximum performance. In Eco mode, the dual-clutch transmission upshifts earlier to maximize fuel-efficiency.

The Ioniq Electric is powered by an 88-kW electric motor producing 118 horsepower and 215 pound-feet of torque. A 28.0-kWh Lithium-ion polymer battery is channeled through a single-speed transmission. Electric equivalent fuel economy is 1.7 Le/100km. With a full charge, the Ioniq Electric has a 200-km range. Plug it into an optional fast charging station at home or increasingly at public locations like shopping malls and public and private parking garages, and you can achieve an 80-percent charge in 23-30 minutes.

So how does all of this high technology perform in real driving conditions? Very well indeed. During a regional press introduction, assembled journalists drove Hybrid models.  The Ioniq Electric and Plug-in will be introduced a bit later this year. With the Hybrid, the switch between gasoline and electric power is seamless. There are no untoward noises or clunky transitions to indicate the fuel saving symphony going on under the lightweight aluminum hood. FYI, the tailgate is also aluminum, and the regular 12-volt battery used to start most cars has been omitted, saving 11.8 additional kilos. In the battle for better fuel economy, lighter is always better.

Handling and ride comfort are impressive in this hatchback trio that feature MacPherson strut front/multi-link rear suspensions in the Hybrid models, and a MacPherson strut/Torsion beam configuration in the Ioniq Electric. A combination of aluminum and high-strength steel, joined with aircraft grade structural adhesives, not only help towards better fuel economy by lightweighting the structure, the combo also provides superior crash protection by increasing structural rigidity.

With safety as a priority, Ioniq comes with a raft of standard and optional safety gear (depending on trim level) including Electronic Stability Control, Blind Spot Detection with Rear Cross-traffic Alert, Lane Change Assist, Forward Collision Warning, Lane Departure Warning, Smart Cruise Control, seven airbags, Automatic Emergency Braking with Pedestrian Detection, Electronic Brake-force Distribution, Brake Assist, dynamic bending headlights, and much more. Safety is no longer the exclusive domain of the big European sedans from Mercedes-Benz, BMW, Audi, and Volvo, as Ioniq offers big-boy safety at price points that scream ‘Loss Leader.’ But the Ioniq is not a loss leader, and with a lifetime warranty on the Hybrid system battery, it could be the new pound-for-pound small car champion.

Step inside, and you’ll be baffled again as to how Hyundai can pack so much into a car for so little money. Interior ergonomics are spot on, as every switch and dial seems like it was placed just for you. My test vehicle was a top trim level Ioniq Hybrid Limited Tech, expected to sell for about $33,000. Air conditioning, a 10-way driver’s seat with memory, a six-way passenger seat, a power glass sunroof, leather seating surfaces, heated front seats, a tilt-and-telescopic steering wheel with audio and cruise controls, Bluetooth, proximity key entry with pushbutton start, BlueLink telematics, multiple 12-volt outlets, wireless ‘Qi’ phone charging, 8.0-inch touchscreen navigation, Android Auto/Apple CarPlay, and a high-quality audio system (Infinity Premium audio is optional) are among Limited Tech trim standard gear.

Details, like space in the centre console for a tablet, exceptionally well done styling (Ioniq looks like a mini luxury car), and even ‘green’ sensibility in the interior help round out the outstanding value Ioniq offers. For example, the interior door panels, headliner, and carpeting are made from eco-friendly materials like recycled plastics, powdered wood and volcanic stone. Using these materials reduces the weight of some interior components up to 20 percent, and certainly lessens the environmental impact from creating these products with virgin materials.

The Ioniq Hybrid will begin from about $24,000 for the Blue model, but detailing pricing is not yet available.

Is the 2017 Hyundai Ioniq a buy? You better believe it is. Get your Iconic Ioniq at your local Hyundai dealer soon.
©(Copyright Canadian Auto Press)
Car Shopping Tools