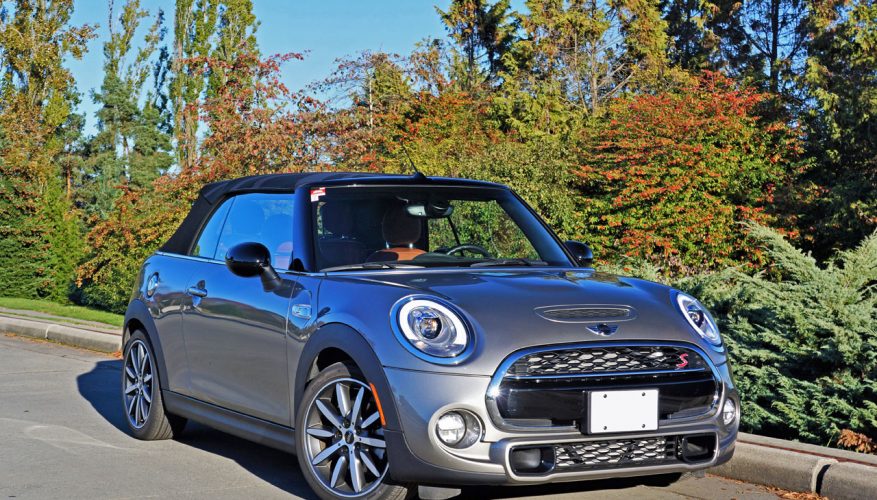 By: Trevor Hofmann
It’s getting to be the time of year when we can expect sunshine to reign down on us more often than not, or at least most are hoping to see less rain as we near the mid-point of spring. Such thoughts cause some of us to dream of open-top motoring in a new convertible, and few carmakers offer as much sun-worshipping fun for as little cost as Mini.

Good news for entry-level cabrio fans came last year when Mini upgraded their diminutive Convertible to its third-generation design, and with the move it grew in size, comfort, and performance while adopting the new BMW UKL1 architecture. This is the same design that arrived as the Mini Hardtop for 2014, which was renamed 3 Door due to the introduction of the funky 2017 5 Door, and was expanded to include the new six-door Clubman last year; this new Mini Convertible completing the brand-wide transformation. To be clear, the Clubman uses a modified UKL1 platform appropriately dubbed UKL2, which also supports the Countryman subcompact SUV and BMW’s latest X1, the BMW 2 Series Active Tourer and Grand Tourer models, which are front-wheel drive subcompact five- and seven-occupant MPVs not slated for North American consumption, plus a front-wheel drive BMW 1 Series Sedan that will only be sold into China (which is a shame, because with xDrive added it would sell like gangbusters here).

This 2017 Mini Convertible is therefore purely carryover, although Mini has introduced a new top-line John Cooper Works (JCW) version to the range, and while driving such would’ve been very tempting if given the chance, for reasons unknown we were only allotted the more affordable and therefore more popular Cooper S Convertible. Yes I know, poor us having to spend a week in one of the most enjoyable runabouts currently available, but as the saying goes, someone had to do it.

That last sentence is a sizeable claim for such a tiny car, but truth be told the new Cooper S Convertible makes even the most ordinary of grocery runs a fun-filled adventure. Mini included its standard six-speed manual to spin up the joy meter further, a nice notchy gearbox that combines well with an ideally weighted clutch for spirited performance off the line and up to highway speeds. It’s actually a tad slower from standstill to 100km/h at 7.2 seconds compared to 7.1, the advent of turbocharged power across the entire Mini line providing greater torque at low revs and therefore a better match to an automatic transmission than the old naturally aspirated engine’s peaky performance. Even the base 134 horsepower 1.5-litre turbocharged three-cylinder is quicker of the line in auto guise at 8.7 seconds compared to 8.8 thanks to 162 lb-ft of twist, but either way the 0.1-second difference is so nominal it’s unnoticeable from the seat of the pants.

The Cooper S’ twin-scroll turbo four-cylinder makes a massive difference over the base powerplant, however, its output up 55 horsepower to 189 and torque increased by 45 lb-ft to 207. That’s an entirely different league, the S pulling from standstill with real verve and especially fun when powering out of a tight curve, something the Cooper S Convertible does with the feel of a sports car. Even with its added length, width and girth it’s still small and light compared to any other available four-seat drop-top, save Fiat’s 500C that’s not a full convertible. Still, drive the two back-to-back in anger and you’ll know which will carve you through a curving canyon two-laner quicker or up and back down a serpentine mountain road faster, the Cooper S Convertible every time.

It’s not all about speed, of course, the larger Mini also the more comfortable car, its transmission smoother, especially if opting for the six-speed auto, and its ride firm yet compliant enough for such a small and sporting car. The Cooper S Convertible utilizes a more rigid chassis setup than the base model, and my tester’s larger 17-inch Propeller Spoke two-tone alloys on lower profile 205/45 Hankook Optimo all-seasons were less forgiving too (the base Cooper S rides on 16s), but once again it’s never harsh, while the structurally sound body shell didn’t creak and groan like some other soft top cars. Likewise, it’s coupe-like quiet with the insulated powered roof in place.

Comfort in mind, my Cooper S Convertible’s cabin was over-the-top luxurious thanks to an inherently good design incorporating premium-like soft touch plastics across the dash top, the door uppers, and other key areas, loads of bright shiny metals to add rich sparkle, optional glossy carbon-look instrument panel inlays that come as part of a $550 Style package which also adds a unique Mini Yours sport leather steering wheel, piano black lacquered accents on the doors, and Chrome Line inner and outer trim. My tester’s richest interior upgrade was without doubt its gorgeous Chester Malt Brown diamond-quilted leather upholstery, a $2,250 option that gave it a bit of Rolls-Royce-like flair, while a $1,000 Wired Navigation Package increased the infotainment display to 8.8 inches while adding navigation with crystal clear mapping, a more comprehensive Mini Connected interface (that even tells you how long you’ve been driving with the top down, plus the weather app warns if rain is on the way), and more, plus an $800 Visibility package filled that bigger infotainment screen with a particularly good rearview camera when backing up, as well as a head-up display that projects pertinent information onto the windscreen.

If Mini had stopped there it would’ve been a very upscale subcompact drop-top, but yet more options were added which steadily moved the little two-door into premium territory in both features and price, such as a $1,200 Essentials package that provided more all-season open-top motoring due to heatable front seats, less wind in the hair anytime via a wind deflector, rear parking sensors, plus front and rear fog lamps, while a Loaded package, also $1,200, added proximity-sensing Comfort Access to the already standard toggle-operated bright red ignition switch (the coolest of its kind anywhere), an auto-dimming rearview mirror, auto on/off headlamps, rain-sensing wipers, dual-zone automatic climate control, and the aforementioned Sport suspension upgrade with Dynamic Damper Control. Lastly, a $1,150 LED Lights package added LED headlamps with adaptive cornering (the latter at an additional $250 cost), LED fog lights, and white turn signals. Oh, and I almost forgot the obvious addition of a black and white Union Jack on the rooftop for an additional $500, while the previously noted wheel upgrade added $800 to the bottom line, my Cooper S Convertible loaner jumping up from its very reasonable $32,740 base price to a more BMW-like $46k and change.

You can push that price up past $50k with a few more features, like the $2,750 JCW package, $3,600 Mini Yours package, larger $1,430 18-inch wheels, a $1,400 automatic transmission or a $1,650 sport version with paddles, a $750 Harman/Kardon audio upgrade, a $500 alarm, $250 universal garage door opener, $150 storage package, and many more factory options as well as myriads of dealer-added accessories to personalize your ride. While this might at first seem like a lot to pay for a front-wheel drive subcompact, even a topless one, it’s actually quite reasonable when put next to BMW’s own 2 Series Cabriolet that starts at $46,300 and moves steadily upward from there, Audi’s A3 Cabriolet that can’t be had for less than $43,800, and other premium-level subcompact convertibles, a class the Mini Convertible definitely qualifies for. The base Cooper Convertible starts at $28,490 plus freight and fees.

Along with its luxury and performance attributes, all Mini Convertibles provide plenty of front seat roominess if not much rear quarter comfort. The front perches are supportive in all the right ways, very adjustable, albeit via manual actuation, and the car’s tall profile means even extremely tall folks fit inside quite easily with the top up as well as down, but those in the back will find their legroom and foot space marginalized while the rear seatbacks are more upright than most will like. This is a problem with all subcompact convertibles, but small adults and most kids won’t have a problem sitting in back as long as those up front aren’t too tall.

Cargo space is also at a premium, the tiny 215-litre (7.6 cubic-foot) trunk good for a laptop bag or two, some gym gear thrown into a knapsack, plus some groceries purchased on the way home from work, but little more. If the sun peeks through the clouds on the way home and you want to drop the top, keep in mind that a space divider will need to be lowered reducing your available cargo space to a scant 160 litres (5.6 cubic feet). Good news is a 50/50-split rear seatback that allows longer items to be stuffed through, such as snowboards, skis, poles, and more.

Of note, the John Cooper Works model mentioned earlier isn’t much thirstier at 10.8 city, 7.7 highway and 9.4 combined with the manual and 9.4, 7.2 and 8.4 with the auto, which makes its significant performance advantage of 228 horsepower and 236 lb-ft of torque less about choosing the greener option than its $40,240 starting price, but fans of this hottest Mini trim won’t flinch at paying the price to upgrade as its 6.5-second sprint time, all-round better driving dynamics, and many other standard features will make the move upmarket totally worth it.

Just the same, Mini sales, which hit a high of 7,050 units in 2015, took a bit of a plunge last year with only 6,609 deliveries. Higher fuel prices will likely drive that downward trajectory upward this year, with an early indicator of 1,156 unit sales for Q1 of 2017 boding well for a stronger year ahead. January, February and March 2017 sales were actually up over respective 2016 and 2015 totals, and now with simplified production of one multi-brand platform architecture, fewer body styles in the lineup with the demise of the Paceman, Coupe and Roadster, and other streamlining processes, profits should be up as well.

A profitable brand is good for shareholders as well as fans, the former who earn interest and the latter who more often than not pay it, although to Mini’s credit their owners benefit from more smiles per mile than the majority of consumers. Such is the appeal of Mini and especially this Cooper S Convertible, which combines thrill-a-second performance, surprising luxury, top-tier tech, and a high quality power-retractable fabric roof to let the sunshine in.
©(Copyright Canadian Auto Press)
Car Shopping Tools