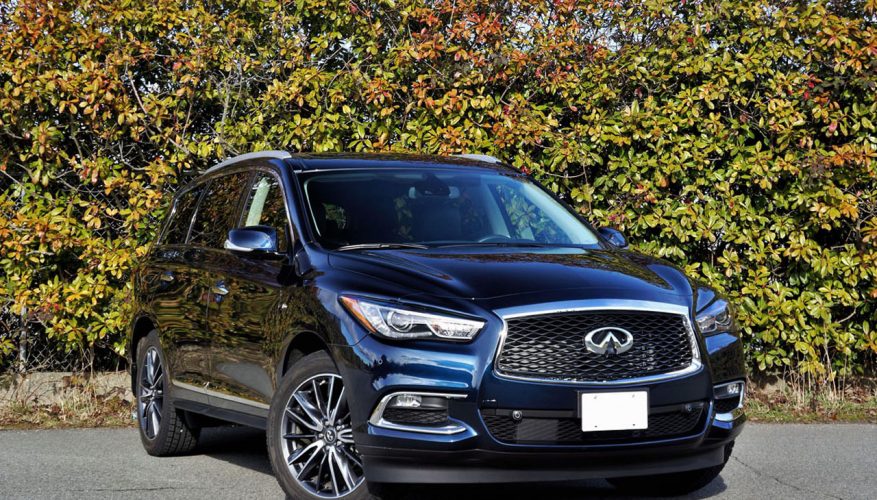 By: Trevor Hofmann
Infiniti gave its most popular QX60 a comprehensive refresh last year, so it’s only reasonable to think this 2017 model would carry over completely unchanged. Not so fast. Rather than sit back and relax, Nissan’s luxury brand has updated this seven-passenger mid-size luxury SUV’s powertrain while also adding new features inside and out.

The large three-row crossover utility has boasted a 3.5-litre V6 engine since it debuted as the JX35 back in 2012, and very few customers or critics have complained about its strong performance, reasonable fuel economy, and silky smooth operation. In fact, Infiniti’s VQ series engine (also used in Nissan products) is one of the most celebrated of its type, having made the Wards 10 Best Engines list eight years in a row; an award it garnered once again last year, with highlights being performance, refinement, quietness, and fuel-efficiency thanks to features like continuously variable valve timing and microfinished camshafts, and this even before adding direct injection and new friction reducing cylinder liners for 2017. If this new 3.5-litre V6 doesn’t make the Wards 10 Best list again I’ll be surprised, especially when factoring in its performance gains. Output is now up 30 horsepower from 265 to 295, while torque jumps 22 lb-ft from 248 to 270.

That’s a noticeable difference off the line, the new QX60 really feeling energetic when pushed, while its continuously variable transmission is very responsive compared to most CVTs, with more positive engagement and crisper shifts. Infiniti provides seven pseudo gears that respond similarly to a conventional automatic gearbox, and while manual mode is provided via the shift lever I only used it for testing purposes, the transmission performing flawlessly all on its own. Like the QX60’s engine the key word for its CVT is smooth, and in a seven-passenger family hauler that’s what most want.

Of course, CVTs are chosen for their efficiency first and foremost, and to this end the updated QX60 does very well considering its added power. In fact, the 2017 model is equal to the outgoing version at 12.2 L/100km in the city and 8.9 on the highway. While these numbers are impressive, Infiniti goes a number of steps better with its QX60 Hybrid that achieves a claimed 9.5 L/100km city and 8.6 highway via a 2.5-litre supercharged four-cylinder, 15-kW electric motor, and compact lithium-ion battery combination, resulting in 230 net horsepower (or oddly 250 horsepower if you use U.S. specs) and 243 lb-ft of torque, albeit not without a significant price bump to $58,300 plus freight and dealer fees. While intriguing, that’s a different review for another time.

As part of last year’s update, Infiniti retuned the QX60’s suspension for enhanced performance, and the result was much better road-holding and more confidence-inspiring feel through the corners, while its ride quality remained thoroughly comfortable. Highway driving improved too, with a tauter, more planted presence, the revised SUV delivering a new level of composure at high speed. To optimize the drivetrain Infiniti includes a standard Drive Mode Selector with Sport and Eco modes that ups performance or alternatively gets more from a tank of regular unleaded (pricier premium is not required), while Snow mode makes for safer takeoff in slippery conditions.

By the way, adding the aforementioned Deluxe Touring Package meant the prerequisite $5,000 Premium Package was also included, which added remote start, an enhanced Intelligent Key system, memory for both front seats as well as the steering wheel and side mirrors, reverse tilt-down for the side mirrors, driver’s entry and exit assist for the seat and steering wheel, accurate navigation with mapping, lane guidance, and 3D building graphics, a particularly good Around-View parking camera featuring a split screen with both rearward and bird’s-eye views, plus voice recognition, while those not upgrading to the fancier Deluxe Touring Package get a 13-speaker Bose audio system to improve sound quality.

Of note, the move up to the Deluxe Touring Package means the $2,400 Drivers Assistance Package isn’t available, but that’s ok because a $4,800 Technology Package is. The pricier upgrade includes everything within the less expensive equipment group’s list, such as auto-dimming side mirrors, front and rear parking sensors, dynamic cruise control with full-speed range (including stop and go assist), automated Distance Control Assist that uses the Eco Pedal to push back on your right foot when closing in on a vehicle ahead, Backup Collision Intervention that provides emergency autonomous braking when reversing, Blind Spot Warning, the just noted Eco Pedal that’s normally used for reminding overzealous drivers to save fuel by applying the throttle gently (unfortunately it can only be turned off when also deactivating Eco mode), and Active Trace Control that improves cornering feel by constantly modulating vehicle braking and engine torque, while also adding a slew of high-tech features.

What’s more, the front crash prevention features noted a moment ago earn the QX60 a “Superior” rating for crash avoidance and mitigation, with the only negatives holding it back from receiving best possible Top Safety Pick Plus recognition being a “Moderate” rating for the ease of use of its child seat anchors (LATCH), and a surprising “Poor” score for its headlights. On this last note, others in the class now come with standard or optional full LED headlights featuring active cornering, which help to achieve the highest IIHS recommendation.

I’m not sure whether the IIHS was referring to second- or third-row child seat anchors in its other critique, but to be fair to Infiniti the QX60’s multi-functional second-row seats are ridiculously easy to operate and let you keep a child seat in place while providing easy access to the third row. Additionally, they slide back and forth in order to make more third-row leg and foot space.

To sample what life would be like in the rearmost seats, I pulled the second row forward enough to leave ample room for my five-foot-eight frame after the driver’s seat was positioned likewise, which left about three inches ahead of my knees and enough space for feet in the third row, although my knees were pushed fairly high to accommodate, while I had about an inch and a half remaining above my head. In other words the third row should be fine for kids, growing teens, and smaller to mid-size adults when needed. Also positive, the panoramic sunroof stretches right into the rear portion of the SUV, allowing third row passengers more of an open, airy experience than the claustrophobic surroundings found in the very back of some rivals. Infiniti also provides third-row reading lights, cupholders, side armrests, and even a powered USB, while the rearmost seats were quite comfortable too, as was the case in all the QX60’s seating positions.

The powered liftgate opens up to a sizeable 447-litre (15.8 cubic-foot) luggage hold behind the final row, which was made even more functional due to a hidden compartment under the load floor that also houses the removable Bose subwoofer. Up to 1,155 litres (40.8 cubic feet) of cargo space can be created by lowering the 50/50-split third row via powered switches located on each cargo wall, whereas the second-row seatbacks fold completely flat via manual levers on their sides, allowing an expansive 2,166 litres (76.5 cubic feet) of volume.

The only cargo limitation is a smaller rear opening than some competitors, its corners rounded and large powered door mechanism robbing loading space and therefore limiting what you may want to carry. Something large like a love seat might not fit in without being dismantled, but for most peoples’ active lifestyles the QX60’s load carrying capability should be more than adequate. Of note, the QX60 Hybrid’s battery is mounted under the floor of the third row so it loses nothing in cargo capacity, and while we’re on the subject of hauling, the conventionally powered QX60 can manage up to 2,268 kilos (5,000 lbs) of trailering weight.

While the QX60 is mostly good I have one more beef, a powered steering column that doesn’t give me quite enough reach for optimal comfort and control. This is an issue I’ve only had with a few Japanese luxury models, and even so it shouldn’t be a problem for the majority of people. I happen to have long legs and a shorter torso, so I need to push my seat farther back than most five-foot-eight drivers, and then extend the steering column as far rearward as possible so as to rest my wrist over the top of the wheel (the way I was taught for maximizing control), but only my fingertips reach when doing so with the QX60. A few more inches of telescoping extension would be ideal, but so far this SUV comes up short. It’s certainly something to try out before you buy.

Rather than leave on a sour note, I’ve saved the best to the last. Since last year’s update the QX60’s interior has become a real feast for luxury-starved eyes, with highlights including the premium SUV segment’s usual cloth-covered roof pillars and soft-touch surface treatments, the latter including much of instrument panel and even the glove box lid. These details are enhanced by a premium contrast-stitched leather dash top, lower console sides, and armrests, complemented by rich looking quilted, perforated leather upholstery with the same contrast stitching as well as cream-coloured piping around the edges of each seat. The high-gloss dark maple hardwood noted earlier is beautifully finished and therefore absolutely stunning next to the QX60’s tastefully applied satin aluminum trim, the entire cabin a breathtaking array of upscale materials in a classic, traditional style.

In other words, for a very reasonable price you can enjoy a superbly finished, impressively equipped, enjoyable driving, highly efficient, and unquestionably fashionable seven-passenger luxury SUV, all of which has made it a very popular option in its mid-size premium category. I can’t help but recommend the new 2017 Infiniti QX60.
©(Copyright Canadian Auto Press)
Car Shopping Tools