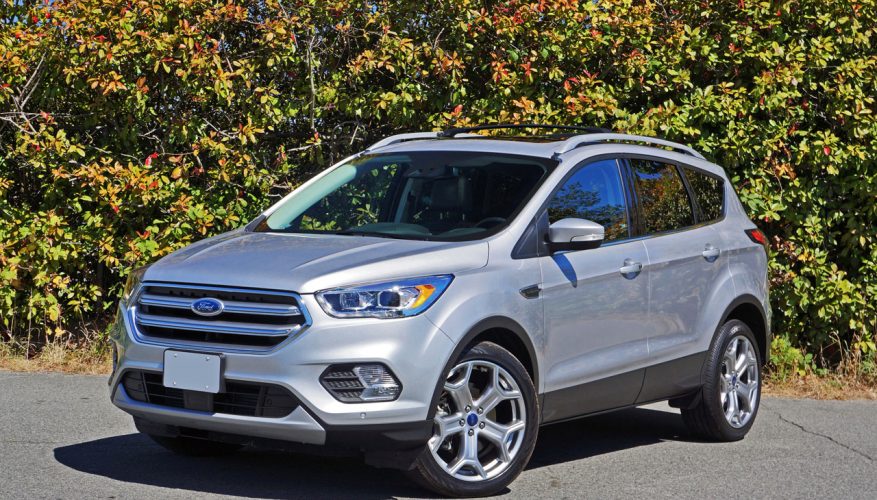 Did the changes to Ford’s fourth-generation 2017 Escape go far enough to keep it in the upper echelon of the hotly contested compact SUV mix? We’ll answer this question and many others in our upcoming review of the 2017 Escape Titanium.

Ford gave its popular Escape a redesign for 2017, with the most prominent differentiator being a new grille, while behind that six-sided aperture is a new 180 horsepower 1.5-litre turbo-four in select trims, replacing last year’s 1.6-litre four. Base models continue with the 2.5-litre four, and top trims like this Titanium feature Ford’s 2.0-litre turbo.

Do you want a few review teasers? The Escape now includes auto stop/start that shuts the engine off when it would otherwise be idling, helping to save fuel and reduce emissions, while inside there’s a new electromechanical parking brake, as well as Ford’s new Sync 3 infotainment system in upper trims, which is one of the key reasons buyers should consider the Escape over its competitors.

There’s a lot more to the 2017 update, with available features including loads of active convenience and safety kit such as auto high beams, adaptive cruise control, lane keeping assist, blind spot monitoring, and an

updated semi-autonomous self-parking system that can steer the Escape into perpendicular slots as well as parallel spots, while available Sync Connect let’s Escape owners check fuel level, unlock the doors, or start the engine remotely from their smartphone.

Come back soon to get all the details about Ford’s 2017 Escape Titanium. We’ll let you know how it drives, how its features work, and how popular it is with Canadian compact SUV buyers.