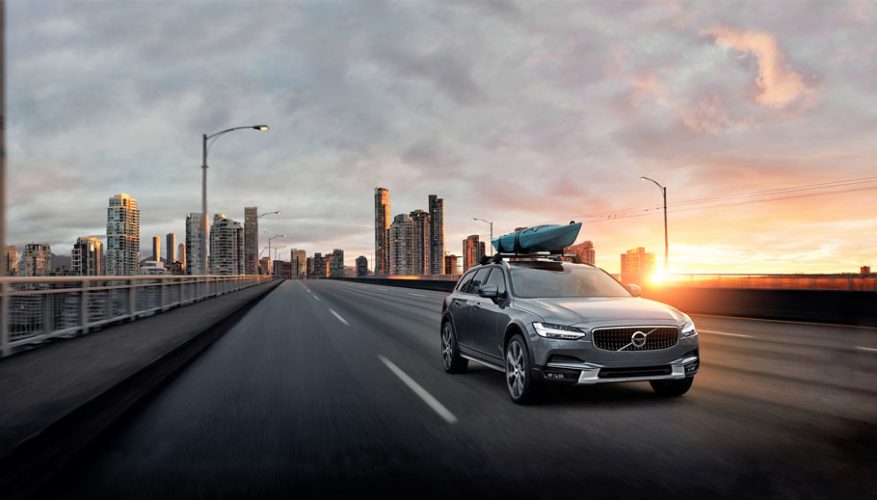 By: Trevor Hofmann
The new 2017 Volvo V90 Cross Country is upon us, replacing the extremely well proven XC70 with beautiful new sheetmetal, stylish LEDs, a more refined leather-lined interior, state-of-the-art electronics, and a technologically advanced powertrain. With styling that could singlehandedly make wagons cool again, it rolls on the same undercarriage as the multi-award-winning XC90 SUV and S90 mid-size sedan models, and is powered by the same turbocharged and supercharged direct-injection 2.0-litre four-cylinder engine used in top-level trims throughout Volvo’s lineup, except for the XC90 SUV that boasts a 400 horsepower plug-in hybrid version of the same power unit in its highest trim level.

In an attempt to draw attention to this all-new model, Volvo has come up with a creative ad campaign designed to lure oftentimes shut-in workers out of doors in order to “rediscover your passion in life”.

“You reach a point in life when you have to choose,” says Thomas Andersson, Vice President Global Marketing, Volvo Car Group in a press release. “Career over passion. Work over play. It’s when surfers turn CEOs. Photographers turn lawyers. Fly-fishers turn doctors. Mountain climbers turn engineers. It’s when you put a piece of yourself on hold. And as time passes, the things you used to love doing start to fade away. This is a reminder to not forget what you love. All the activities that you once embraced.”

Of course, we’ll need to first visit our local Volvo dealer to purchase one of their new V90 Cross Country crossovers before loading up our photography or fishing gear, strapping on our bicycles, surfboards or kayaks, and so on, but the active lifestyle message is nevertheless inspiring and has therefore reached a sizeable audience.

“And then suddenly, when you’re about forty or forty-five years old in the middle life, you wake up one day and say, ‘Huh?’ I’ve arrived, and by Joe I feel pretty much the same as I’ve always felt. In fact I’m not so sure that I don’t feel a little bit cheated. Because you see you were fooled. You were always living, for somewhere, where you aren’t…” continues the monologue (see below for the entire transcript).

While there is some validity in tying luxury consumerism to one of Watt’s Zen Buddhism-inspired philosophies of living life fully now instead of putting anything you want to do off until sometime in the future, especially if you appreciate the finer things in life, there are many ways you can transport yourself, family, friends and active lifestyle gear into gods’ country to do so. Then again, Volvo’s V90 Cross Country is an exceptionally stylish, comfortable, economical, environmentally friendly, and capable way to do so.

“Without clichéd images of rural terrain or off-road capabilities, the V90 Cross Country is presented as The Get Away Car; a perfect enabler that helps people get away from their busy lives to reach that much-sought-after work-life balance,” adds Andersson.

The ad depicts upwardly mobile and already well-established achievers waking up and getting ready for what appears to be a regular routine day of getting ahead in life, before a plot twist sees them departing in various new V90 Cross Country models for more appealing outdoor prospects.

From “international research, undertaken by Volvo Cars,” the automaker tells us six out of ten people want to spend more time outdoors, whether hiking, running, cycling, or engaged in some other activity, with those who’d like to partake but don’t blaming work for consuming most of their time. The new V90 Cross Country ad campaign encourages such people to rediscover “passions and adventures that they once loved and prioritized,” says a press release.

Much of the ad is filmed in Vancouver and the surrounding area, which is not only a hotbed for Volvo sales, but also an outdoor mecca that attracts nature lovers from all over the world. Fittingly, the orator behind that scenery filmed a five-part Canadian TV miniseries called “Alan Watts on Living” in Vancouver before it aired on CBC Television in 1971, which shared his philosophical views on the detrimental nature of culture.

The basic premise of the Cross Country goes back to the previous millennia when tall 4×4-capable station wagons initiated the crossover utility craze, from the original late ’40s–50s era Jeepster to Subaru’s ’70s-80s GLs, AMC’s ’79-87 Eagle, Toyota’s ’80s-90s Tercel SR5 4WD Wagon and ’80s-era Corolla (E90) 4WD Wagon, the mid-’90s Subaru Outback, luxury variations on the theme from Audi and Volvo that arrived later, and the list goes on.

This in mind, the Cross Country name, which was shortened to “XC” just after its initial launch albeit still stamped on the backs of all XC models, has been brought back into full long-form use so as to differentiate Volvo’s raised wagon-crossovers from its taller sport utilities, the naming scheme reinitiated in 2015 on the smaller V60 Cross Country, which shares underpinnings with the S60 sport sedan and XC60 SUV. The V60 Cross Country directly competes against Audi’s A4 Allroad Quattro that arrived in 2009, whereas this new V90 Cross Country and the XC70 that came before duke it out with Audi’s A6 Allroad Quattro, although no longer here in Canada where the Audi has long been unavailable. To understand the market, both are go-to premium answers to Subaru’s Outback, or in other words tall mid-size wagons with SUV-like body cladding and all-wheel drivetrains, the very epitome of the term crossover.

The V90 Cross Country is a mid-size model based on the new V90 wagon. The V90 has zero direct competitors in Canada, filling an important niche for Volvo that has long offered outdoor enthusiasts off-road capable wagons that combine lighter weight and therefore greater fuel efficiency and drivability with the passenger and cargo requirements of SUVs.

The new 2017 V90 Cross Country is available in a single top-line T6 AWD trim level in Canada, incorporating one of the most advanced standard powertrains in the industry, its turbocharged and supercharged direct-injection 2.0-litre four-cylinder engine pushing 316 horsepower through an eight-speed automatic transmission with “Geartronic” manual mode and standard AWD.

Alan Watts (1915–1973) was a British philosopher, best known for interpreting and popularizing Eastern philosophies for Westerners. By the late sixties he had risen to counterculture fame, a celebrity who traveled widely to speak across North America and Europe. He wrote 25 books, his audio library comprises more than 400 talks, and as noted above he also starred in a 1971 five-part Canadian TV miniseries called “Alan Watts on Living” that was filmed and produced in Vancouver and aired on CBC Television. Today, Watts’ written work, audible speeches, and videos are widely viewed online, while his son Mark Watts manages his legacy.

“My goodness, don’t you remember when you went first to school,” plays a 1959 recording of the late British philosopher Alan Watts. “You went to kindergarten. And in kindergarten, the idea was to push along so that you could get into first grade. And then push along so that you could get into second grade, third grade and so on, going up and up. And then you went to high school and this was a great transition in life. And now the pressure is being put on, you must get ahead, you must go up the grades, and finally be good enough to get to college. And then when you get to college, you’re still going step-by-step, step-by-step, up to the great moment in which you’re ready to go out into the world. And then when you get out into this famous world comes the struggle for success in profession or business, and again there seems to be a ladder before you, something for which are reaching all the time. And then suddenly, when you’re about forty or forty-five years old in the middle life, you wake up one day and say, ‘Huh?’ I’ve arrived, and by Joe I feel pretty much the same as I’ve always felt. In fact I’m not so sure that I don’t feel a little bit cheated. Because you see you were fooled. You were always living, for somewhere, where you aren’t. And while as I said it is of tremendous use for us, to be able look ahead in this way and to plan, there is no use planning for a future, which when you get to it and it becomes a present, you won’t be there. You’ll be living in some other future, which hasn’t yet arrived. And so in this way one is never able actually to inherit and enjoy the fruits of one’s actions. You can’t live at all, unless you can live fully, now.”

Check out the video: