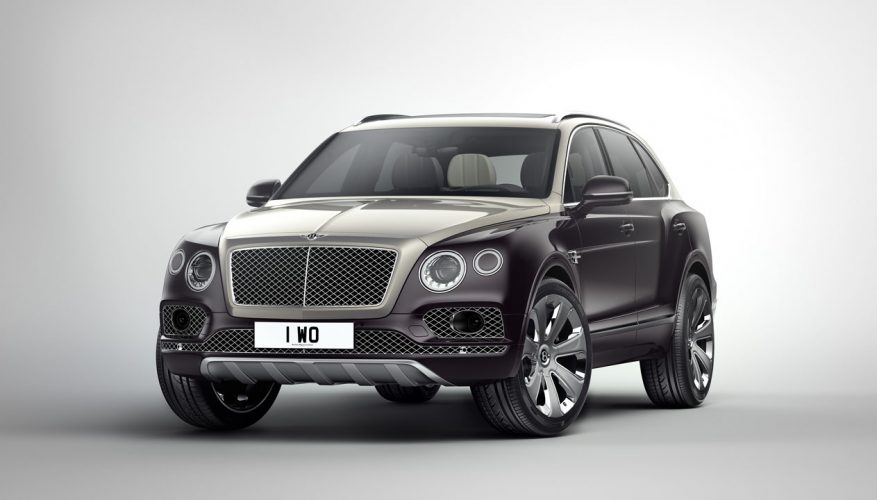 By: Trevor Hofmann
In case you thought Bentley already produced the ultimate luxury SUV, not so confirmed the revered British ultra-luxury marque when it coined its Bentayga Mulliner “The Ultimate Luxury SUV”, a “flagship model” that sets “new standards in automotive luxury” at its Geneva auto show introduction.

OK, Mulliner is merely a top-line trim level of the already ultimate Bentayga and not an entirely new SUV, but it should nevertheless be noted that improvements must be plentiful in order to warrant the highly respected Mulliner name.

On that note, dubbing Mulliner a trim level doesn’t do the name, or rather the British firm’s personal commissioning division justice. Mulliner is Bentley’s exclusive in-house bespoke customizing shop, which has long made the brand’s hedonistically accoutered coupes, convertibles and luxury sedans even more hedonistically accoutered, and therefore is now doing the same for Crewe’s first-ever SUV.

The new Bentayga Mulliner will likely become the rarest of SUVs to ever roam the wild, although we’ll need to substantiate that detail after finding out exactly how many limited editions will be built (the 328 or so 1986–1993 Lamborghini LM002s might prove fewer, not to mention the sprinkling of 1985-2003 Rayton-Fissore Magnum/Laforza SUVs, although the latter had more to do with a lack of interest; ditto for the Russian-built Dartz Kombat and South African-sourced Paramount Marauder).

The special one-off model on Bentley’s Geneva show stand included new Duo Tone paintwork, a first for the Bentayga which will be available across the entire model line starting April, while this unique Mulliner edition’s interior featured gorgeous piano black lacquered veneer inlays that seamlessly blend into exclusive Ombré Burr Walnut as they flow rearward into the cabin. Additionally, baby blue and cream thread was used for the hand-stitched diamond-quilted leather upholstery that was colour-split with black up front and cream white in back, while blue “MULLINER” logos were embroidered into all four seat uppers (orange stitching is shown in the press photos, and you can no doubt get bright yellow-green or even fuchsia if willing to pay the price; Bentley suggests seven tasteful “colour ways”), while last but hardly least a special Mulliner Bottle Cooler came fitted within the aforementioned rear console featuring glass holders adorned with two handcrafted Cumbria Crystal champagne flutes as well as an illuminated chilling cabinet just behind.

Also notable, the Bentayga Mulliner show model came equipped with a picnic set dubbed the Linley Hamper that was first offered as an accessory last year, which includes three large leather-clad cabinets designed to precisely fit within the cargo compartment, one refrigerated with four champagne flutes and two wine/champagne bottle holders, the second filled with Linley silver cutlery and china (coffee cups included, necessary after all that champagne), and another meant for linens that simply had a rolled blanket inside. These hampers are removable to be used as seats around the campfire too, although wayward sparks may cause them to lose their lustre.

Such individualized details make clear that Bentley’s Mulliner division will handcraft most any accessory or feature within your Bentayga, additional Mulliner offerings announced previously including a fully stocked fly fishing kit encompassing cotton, hooks and feathers, reel cases, a fly-tying vice, plus all the tools a fly fisher could require housed within three saddle leather-trimmed trunks of which one is waterproofed for stowing wet clothing, the latter also included; while horology fans can opt for an exquisitely handcrafted Breitling Mulliner Tourbillon dash clock available for a cool £110,000 sterling, which converted to $180,351 CAD at the time of writing. The tourbillon is amongst the most intricate mechanical watch complications ever created, the entire movement comprising 196 individual components including an automatic pendulum winder, while the dial, which is decorated with eight diamond indexes, can be had in mother-of-pearl or black ebony, and casing in solid yellow, white or rose gold.

Audiophiles needn’t worry about enhancing sound quality, as all Bentayga Mulliner editions will be fitted with the model’s best 1,950-watt Naim audio system with a 21-channel amplifier, while a remote-controlled parking heater function is also standard, allowing a heated or cooled interior when the engine is turned off.

As no mere V8 would do in a flagship SUV (and none is yet available for the Bentayga anyway, while the diesel won’t likely be sold into our market at all), the Bentayga Mulliner is infused with Bentley’s top-tier twin-turbocharged 6.0-litre W12 engine boasting 608 horsepower and 663 lb-ft of torque for a 4.1-second sprint to 100km/h and a top speed of 301 km/h (187 mph), which while seemingly unfathomable for such a substantive SUV is nevertheless standard Bentayga fare, as is its claim to fastest production SUV on the planet.

As noted earlier, this very special new flagship SUV will be available to order this spring, so make sure you get the jump on your friends by calling your local Bentley dealer today. On that note, pricing will vary due to the model’s bespoke personalization, but no matter how you outfit the new Bentayga Mulliner it will cost considerably more than the model’s current $266,090 base price.
©(Copyright Canadian Auto Press)
Car Shopping Tools