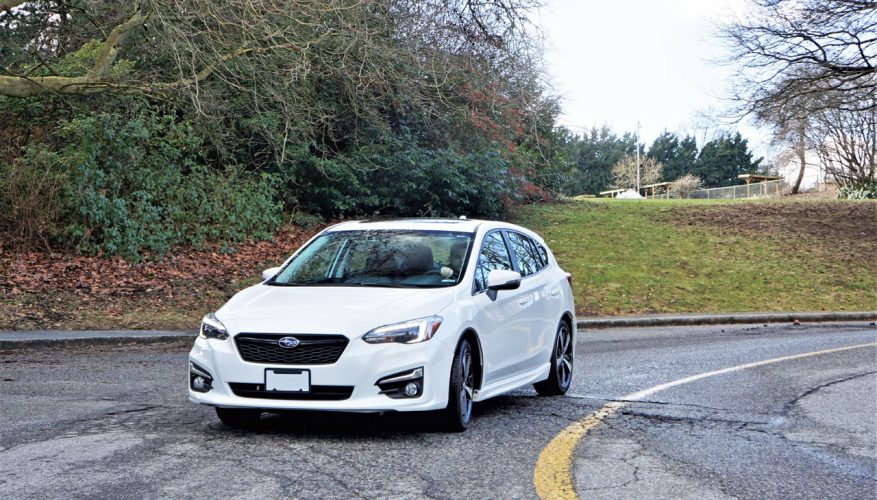 By: Trevor Hofmann
It’s been an especially good 12-plus months for Subaru. Not only did calendar year 2016 result in the Japanese brand’s best-ever sales, but since then it took home trophies for Canadian Black Book’s 2017 Best Retained Value for Overall Brand in the Car Category, as well as top overall brand honours in ALG’s 9th Annual Canadian Residual Value Awards.

The Impreza achieved third place in the CBB award’s compact category, first place won by Subaru’s Crosstrek that’s based on the Impreza 5-Door model reviewed here, while the Impreza also won the ALG award’s “Compact Car” category outright. Topping it all off, Impreza had its best-ever sales in calendar year 2016 too, one of few compact models that actually grew its numbers from 2015 through 2016.

Helping boost that total is an entirely new 2017 Impreza that arrived last fall, and believe me it’s a game changer. For starters it’s arguably the most attractive Impreza ever, this aided by a longer, wider and lower stance. Second, it’s the first Subaru compact produced in North America, and lastly it rides on a new 70-percent-stiffer global platform architecture that Subaru says “significantly enhances safety, riding comfort and agility.”

Another feature pulled up from lesser trims is Subaru’s horizontally opposed 2.0-litre four-cylinder engine that’s actually standard across the entire Impreza line. At 152-horsepower, the new version is four ponies more potent than before yet puts out an identical 145 lb-ft of torque, while Subaru’s Lineartronic CVT (Continuously Variable Transmission) is standard with Sport-tech trim as well as the lesser Sport model when the Technology package is added. All other trims come standard with a five-speed manual and make the CVT optional.

I’ve driven many Impreza’s with the manual and can attest to its nice notchy feel, easy clutch engagement, and overall drivability, while the CVT is as smooth and effortless as transmissions get. Subaru includes a set of paddles for those moments when you want to extract the most from the drivetrain, and they work well for this type of gearless box thanks to seven stepped intervals that mimic a more conventional automatic surprisingly well, reminding that a version of this transmission is also used for the mighty WRX and therefore deserves respect. The engine pulls strongly from all over the rev range, although peak twist arrives at 4,000 rpm and max power at 6,000. Still, it gets up and goes quickly from standstill, is plenty lively around town, isn’t shy about passing at highway speeds, and more than holds its own on a curvy back road, the little boxer not holding any punches.

While quick for its compact class, the Impreza Sport-tech displays even fancier footwork. Again I’m reminded of its WRX kin, and while I won’t go so far as to compare the two at the limit, this less purposefully sporting sibling is still a whole barrel of fun on a circuitous mountain two-laner. Its grip is adhesive, some thanks paid to the Sport-tech’s upgraded 18s, sport suspension, and active torque vectoring, while its bigger front binders make for shorter stopping distances and less fade after repeated stomps. And while it sounds as if the Sport-tech is all about performance let me assure you it’s thoroughly comfortable too, the car’s suspension capable of soaking up the most abusive inner-city bumps and ruts, its NVH levels hushed thanks to those aforementioned engine mounts as well as more sound insulation than its predecessor, and its seats sublime.

They’re heavily bolstered and inherently well designed, with perforated leather that wraps around the body for excellent support everywhere, yet Subaru has nevertheless included ample adjustment so as to find that oftentimes-illusive ideal seating position. Even the leather is more supple than most in this class, giving them a look that’s much more premium than mainstream. As noted earlier, grey and red stitching complement key areas throughout the cabin, the meaty leather-clad sport steering wheel particularly notable for the latter thread, although I must admit my need for finery had me gawking open-mouth at the beautiful grey-stitched detailing that edged the leather-like soft-touch dash top and instrument panel.

Each generation of every Subaru model grows in interior refinement, this Impreza a wholly more hospitable place for driver and passengers front to back with respect to materials quality, design, and electronics. Along with that fancy dash top and IP the door uppers get the same soft synthetic treatment, the inserts and armrests are genuine leather, stylish gloss carbon-fibre-like inlays wrap all the way around occupants, satin-silver/grey accents highlight other key elements, as do tasteful applications of chrome, whereas all of the switchgear is superb, especially the tight fitting, well made buttons and toggles on the steering wheel, the rim of which just happened to be heatable as well. Really, the only thing missing from this otherwise brilliantly executed interior is a cubby in the overhead console to store sunglasses.

The attractive primary gauge cluster is comprised of two dials with red backlit graphics and a colour trip computer in between. The full multi-info system is actually up on top of the dash in its own separate screen as noted earlier, its crisp detail and high-quality graphics unsurpassed in the class. Then again my tester’s top-line infotainment display was the real attention-getter, its resolution as sharp as anything else in this segment, its contrast deep, colours rich and graphics stimulating, while Starlink has come a long way in integrating smartphones since first introduced. As noted Apple CarPlay and Android Auto come standard, my Samsung phone linking up to the latter easily, while Subaru also supplies an app for communicating with your car remotely.

Slot the gearbox in reverse and a bright, clear backup camera shows dynamic guidelines for negotiating tight parking spots, while the Sport-tech’s standard navigation offered nicely detailed mapping and accurate guidance. Lastly, the upgraded Harman/Kardon audio is totally worth the jump up to Sport-tech trim alone, a great system that rivals those in premium brands. The centre stack also houses a nicely laid out dual-zone automatic climate control system that kept temperatures just right for my partner and I, while the two-way seat heaters warmed quickly and became quite toasty when fully cranked.

The rear seats were nearly as comfortable as those up front with good lower back support, and there was no shortage of room either. I had about six inches ahead of my knees when the driver’s seat was set to my five-foot-eight frame, plus three or so inches over my head, while I even had room enough to move from side to side. Likewise for foot space, which was actually better than average with plenty of movement for big winter boots underneath the seat. The centre armrest flips down at just the right height for adult comfort, and is filled with dual cupholders rimmed with rubber grips to securely hold drinks. Subaru doesn’t finish the rear door panels quite as nicely as those up front, with hard plastic on top and no gloss for the carbon-like trim, plus no metallic accenting either. At least the perforated leatherette inserts are nicely padded and the contrast-stitched armrests still appear like leather.

The Impreza 5-Door has always been capable of gobbling up gear, and with 589 litres (20.8 cubic feet) of volume in the cargo compartment behind the rear seatbacks and 1,566 litres (55.3 cubic feet) when its 60/40-split second-row is folded flat the new one is even better than previous iterations. OK, let me be clear. Its max stowage is 80 litres (2.8 cubic feet) greater than the 5-Door Touring I reviewed last year, but its dedicated luggage area is down 48 litres (1.7 cubic feet), that lower roofline probably encroaching somewhat. I certainly wouldn’t have noticed unless I read it, and honestly I was preoccupied removing the retractable cargo cover’s brushed metal cross-member.

It’s a solid feeling, nicely made bit of kit, just like the rest of the car, this new Impreza having totally won me over after time well spent enjoying its wonderful blend of premium-like quality and dutiful practicality. I’ve always appreciated Subaru for the latter, the Japanese brand making reliable workhorses that seem to thrive on subservient service no matter how harsh the master, but memories of such utilitarian predecessors quickly vanish from the mind’s eye after a few minutes with the new 2017 Impreza, a car that immediately makes Subaru a must-shop brand in the compact class.

Truly, this new Impreza meets the majority of my elitist objectives when it comes to exterior styling, interior design, quality, connectivity, driving dynamics, and even fuel economy with a claimed rating of 8.3 L/100km city and 6.4 highway for the sedan or 8.4 and 6.5 for this 5-Door, not to mention meeting feel-good Partial Zero Emission Vehicle (PZEV) standards. On top of all this it’s large enough for all my ski gear and equipped with one of the best all-wheel drive systems available on any car, capable of getting my clan and me up the mountain anytime of the year, all for just $30,995 plus freight and fees as tested or a mere $19,995 in base trim. Add to that its superb resale value and… Enough said. Where do I sign?
©(Copyright Canadian Auto Press)
Car Shopping Tools