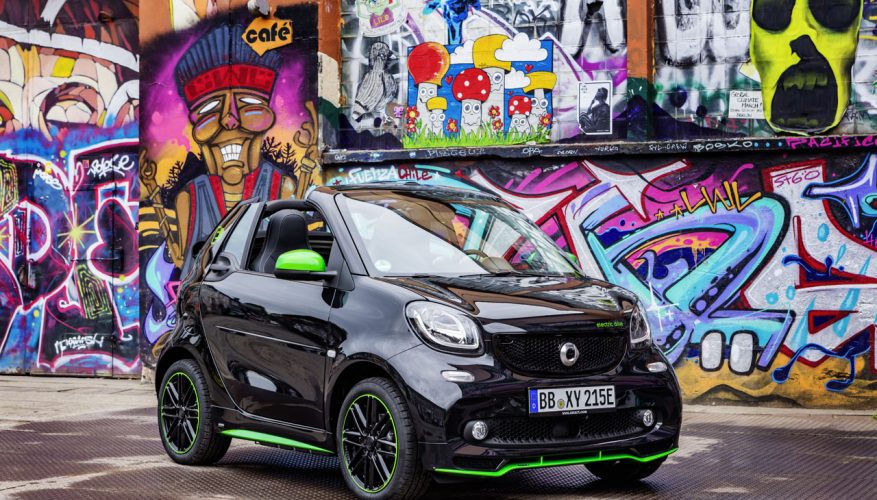 By: Trevor Hofmann
The Smart Fortwo Electric Drive has been with us since 2013 when it was introduced as a 2014 model, and since then has received rave reviews from those who appreciate efficient EV mobility. Its smooth acceleration improved on the gasoline-powered model’s performance, plus it’s hard to argue against near zero fuel costs despite a temporary drop in pump prices.

Yes, as it turns out many Canadians haven’t fared much better at $27-$54 per barrel than we did when crude hovered between $100-$146, the provincial average gasoline pump price ranging between $0.97 per litre in Saskatchewan and $1.29 in Newfoundland, with Ontario at $1.04 and BC at $1.19 at the time of writing, while the lowest metro price is Edmonton at $0.95 and highest Vancouver at $1.29, Toronto splitting the middle with $1.06 per litre. Hence, alternative fuel vehicles are still just as valid today as they were two and a half years ago before the oil market tanked.

Smart’s marketing department might want to point this reality out when advertising its various cars, all of which are some of the most fuel-efficient in the Canadian industry, but then again the brand’s parent Daimler might not to want to say anything that could potentially curtail large SUV sales, which partially pay for the development of new Smart cars like this Fortwo Electric Drive. As it is, Smart’s EV will likely play a niche role in our overall automotive market like the rest of the lineup, although those considering a plug-in electric should take a closer look at the subcompact city car when the new one becomes available this spring.

First off, Smart will produce it in both Fortwo Coupe and Cabrio body styles, making the Electric Drive the first all-electric convertible since the long-gone Tesla Roadster.

“The smart is already the perfect city car, and with electric drive it becomes a little bit more perfect,” said Annette Winkler, head of Smart. “This is why we will soon be offering our entire range – Smart Fortwo Coupe, Smart Fortwo Cabrio and even our smart Forfour [not available in Canada] – as all-electric versions. We are joining legions of Smart fans, as well as enthusiastic drivers of the three preceding generations, in looking forward to the unique driving fun offered by the new Smart Electric Drive. Very attractive prices only add to our anticipation, especially in countries where there is a buyer’s premium.”

Smart’s Canadian division has yet to announce those prices, but the outgoing 2016 Fortwo Electric Drive was priced at $26,990 for the Coupe and $29,990 for the Cabrio, so expect the new versions to closely hold to the line. Even if the base window sticker moves up a few hundred or even as much as $1,000 to match increases by some competitors, the Electric Drive will once again be the least expensive four-wheel electric vehicle in Canada, its list of 2017 subcompact and compact rivals including the Mitsubishi i-MiEV four-door that sells for $27,998, the Ford Focus Electric at $31,998, the Nissan Leaf at $33,998, the Kia Soul EV at $35,395, the new Chevrolet Bolt EV at $42,895, and BMW’s upgraded i3 at $47,500.

Setting the Smart apart is its diminutive size, the 2,695-mm (106.1-inch) long Electric Drive almost identical in dimensions and appearance to the two-seat gasoline-powered Fortwo, which is one of the easiest vehicles to manoeuvre through tight spaces on today’s market, let alone park; the EV having the same 6.95-metre turning circle as the conventionally powered model.

Small translates into a light curb weight, the spritely Fortwo Electric Drive making the most of its rear-mounted 80 horsepower three-phase synchronous electric motor thanks to all of its 118 lb-ft of torque coming on immediately from standstill, its zero to 100km/h sprint taking 11.5 seconds (11.8 with the Cabrio) and top speed limited to 130 km/h.

Driven modestly the fully charged 17.6 kWh Lithium-ion battery can manage a claimed 160 kilometres (NEDC – its official Canadian range is not yet available) before needing a recharge, which makes it ideal for urbanites commuting to and front work or running inner-city errands. As with any EV, high-speed highway driving depletes battery reserves much quicker than city limits.

Smart includes a standard high-performance, on-board charger that refills the battery pack from 20-to-100 percent via a household socket faster than its predecessor at just 13 hours, while powering up with a level II charging station (wallbox), which can be found throughout most metropolitan areas for free (parking fees aside) after applying for a no-cost ChargePoint (or other) card, takes approximately 2.5 hours, or about half the time of the outgoing model.

To eke out as much range as possible, the new Smart Electric Drive will benefit from an Eco mode that keeps accessories like the climate control system at minimal levels, retards acceleration, limits maximum speed, and pre-selects maximum recuperation, which is a process that captures otherwise wasted kinetic energy and puts it back into the electrical system via an overrun mode and/or regenerative braking.

The climate control system just mentioned also features a pre-entry mode that maintains a desired interior temperature while the battery pack is being recharged, all controlled by a new downloadable “smart control” app that also lets owners monitor the charging process or look up additional Electric Drive information from wherever they are via their smartphone, tablet or PC.

Along with many of the same types of features conventional Smart Fortwo customers have grown accustomed to, the Electric Drive ups the ante with revised primary instruments featuring a power metre and battery status display, while heatable seats and a heated steering wheel will add comfort during cold winter months.

Like all Smart Fortwos, the Electric Drive will be available with plenty of colours and options applied at either the Smartville, Hambach, France factory or purchased at the dealer level so owners can customize the look and functionality of their rides.

Of note, Smart’s Canadian sales rebounded last year with 1,875 deliveries compared to just 716 sold through calendar year 2015, much thanks to the entirely new third-generation conventionally powered Fortwo. While that number still isn’t close to past highs, the brand finding 4,080 Fortwo buyers in 2005, the new Electric Drive should help boost the brand’s recent success yet higher.

Aiding EV sales are new rebate programs to help promote cleaner driving, with BC’s usual $5,000 rebate upped to $8,250 if you trade in an old “clunker” at the point of purchase (which will be taken off the road); Ontario’s program now capped at 30 percent of the price of the EV and therefore expected to remain at $8,500; and Quebec’s maintaining status quo at $8,000 no matter the EV purchased.
©(Copyright Canadian Auto Press)
Car Shopping Tools