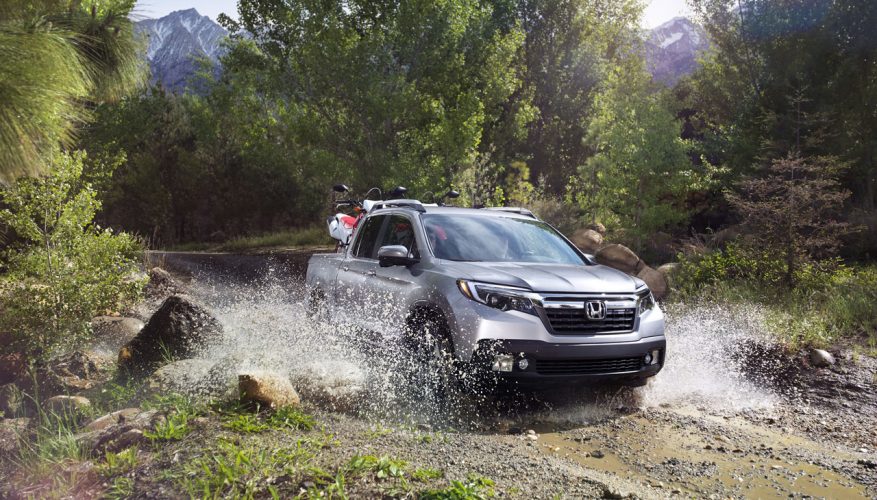 By: Trevor Hofmann
Honda completely redesigned its innovative unibody pickup truck for the 2017 model year, and as a reward for a job well done is being named 2017 North American Truck of the Year. The Ridgeline has long been lauded for providing crossover SUV-like handling, ride comfort, and fuel economy in a versatile pickup truck package, but the mid-size model goes much further to win over would-be buyers than that. Like its predecessor, which came on the scene in 2005, Honda has taken a very different tack with this mid-size entry. The new second-generation Ridgeline also features a crossover-SUV-like unibody design albeit with a closed-boxed frame integrated within, combining much of the towing and hauling strength of a rugged frame with the taut structure of a monocoque body shell. What’s more, its industry-exclusive Dual Action Tailgate both lowers in the usual fashion and swings sideways so it doesn’t need to be detached when clamping on ramps designed to work with ATVs, motorcycles, ride-on mowers, etcetera, or accessing its trunk. And yes, the innovative pickup truck continues to feature Honda’s lockable In-Bed Trunk beneath the cargo bed, yet another industry-exclusive. For 2017, the cargo box sidewalls are totally flat so as to adapt more easily to aftermarket canopies and campers, while the cargo bed is made from a scratch- and dent-resistant composite called SMC (Sheet Moulding Compound/Composite), a glass-fibre reinforced polyester resin material, and therefore doesn’t need a bedliner. Additionally, the Ridgeline boasts the world’s first Truck Bed Audio System, ideal for tailgate parties. The 2017 Ridgeline also receives a full assortment of Honda Sensing active safety gear as standard equipment, including adaptive cruise control, forward collision warning, emergency autonomous braking, lane keeping assist, lane departure warning, and more, all of which would result in a Top Safety Pick+ rating from the Insurance Institute for Highway Safety (IIHS) for every trim if the U.S.-spec truck being tested came with as much standard kit as our Canadian version. Of note, the Ridgeline is the only 2017 pickup truck to receive such safety accolades. This is Honda’s second consecutive year of top honours, with the Honda Civic winning the 2016 North American Car of the Year. What’s more, this 2017 award is the Ridgeline’s second NACTOY award, the first being in 2006 just after the first-generation model went on the market, which was also when the previous Civic won 2006 North American Car of the Year. “This award is a prized validation of the innovations and advantages the Ridgeline offers midsize pickup truck customers and a great recognition of the American development team’s work,” said John Mendel, Executive Vice President of American Honda Motor Co., Inc. “This is a terrific way to kick off 2017, and we’re looking forward to sharing more innovative Honda products in the year ahead.” Unlike most automotive awards programs, the North American Truck of the Year Award isn’t directly tied to any publication, radio or television station, or other media outlet, but rather its winners are chosen by a group of 50 independent automotive journalists from the U.S. and Canada. NACTOY awards recognize the most outstanding vehicle of the year based on innovation, design, safety performance, handling, driver satisfaction and value. ©(Copyright Canadian Auto Press)
Car Shopping Tools