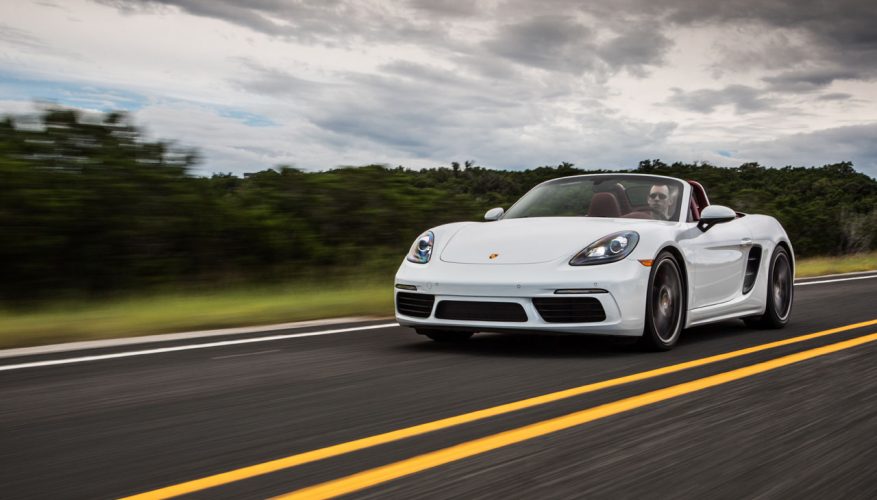 By: Trevor Hofmann
Recently we reported on Porsche taking home Canadian Black Book’s 2017 Best Overall Brand Award in the Luxury category, as well as four individual model awards. These awards were handed out at the Canadian International Auto Show in Toronto last week, as were awards for the 2017 ALG Canadian Residual Value Awards. Why two residual value awards? The difference between the CBB awards program and ALG’s is that CBB analyzes the past and ALG forecasts the future. On that note the two Porsches chosen to retain their values best after three years are the new 718 Boxster in the Premium Sportscar Segment and the Panamera in the Premium Executive Segment. “I am pleased to accept these two awards from ALG,” said Alexander Pollich, President and CEO, Porsche Cars Canada, Ltd. “Our new 718 Boxster exemplifies the modern two- seat roadster and provides its occupants with an unrivaled driving and ownership experience. The Panamera underlines its appeal with its second consecutive ALG award with a whole new model that innovates and rewrites the rules as to what a sports sedan should be.” ALG Canadian Residual Value Awards winners are chosen after studying the competition within each vehicle segment, as well as historical vehicle performance and industry trends. Additionally, vehicle quality, production numbers relative to demand, pricing, and marketing strategies are also factored in. Additionally, everyone knows that two witnesses are better than one, and with respect to Porsche’s case for dominant resale values the additional validator is Canadian Black Book’s 2017 Best Retained Value Awards. After taking note of just how many individual class awards Porsche ran away with in this year’s CBB awards program, it was unsurprising to see the brand take home the Overall ‘Luxury’ Award too. Best Overall Brand Award categories are new to CBB, the winners chosen by averaging the retained value of each brand’s entire vehicle lineup over four years, with the highest average in each of three categories awarded. “After a decade of presenting these awards, we’ve established that it is necessary to recognize the brands that really excel in terms of retained value, across all their products,” said Brad Rome, President, Canadian Black Book. “That said, our number one priority in presenting these awards, is to help consumers know what models and brands provide the best opportunity to save money in the long term.” It’s nothing new to see Porsche leading the categories it competes in. This year its Panamera four-door coupe took top honours within the “Premium Luxury Car” class, the Boxster two-seat convertible scooped first in the “Premium Sports Car” segment with the 911 coming in second, and the Cayenne held on to its “Midsize Luxury SUV” crown. It’s important to understand the true price paid for a vehicle is the difference between the cost of purchase and what’s left over when that vehicle is traded in or sold later. “Depreciation is the single largest expense of owning a vehicle, more than gas, maintenance or insurance,” said Brian Murphy, VP Research and Editorial, Canadian Black Book. “Understanding your vehicle’s retained value is extremely important for anyone researching to buy, sell or trade-in any vehicle.” To clarify, while called the “2017” Best Retained Value Awards the vehicles in question were from the 2013 model year. Vehicle values are tracked over four years, which involves CBB “analysts scouring hundreds of thousands of sales transactions and other data points from live auctions, online auctions, dealership and other proprietary sources,” said the third-party analytical firm in a press release. Prizes get awarded to vehicles that maintain the highest percentage value when compared against their original Manufacturer Suggested Retail Price (MSRP). ©(Copyright Canadian Auto Press)
Car Shopping Tools