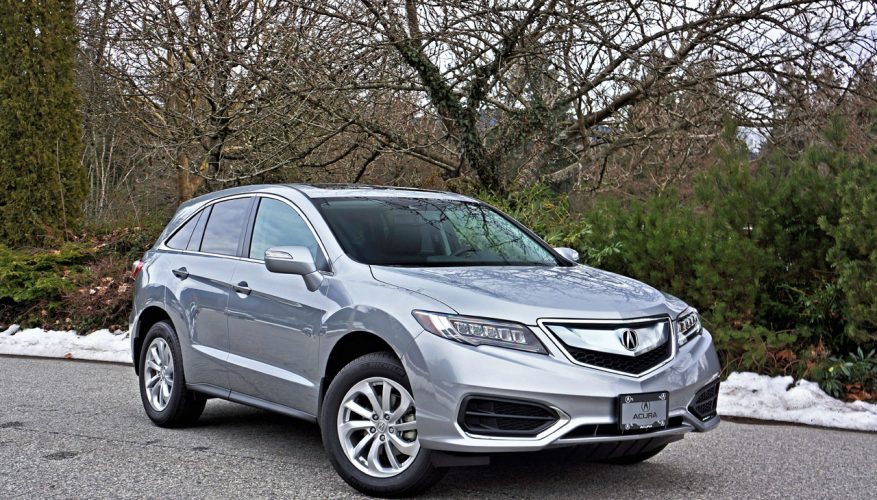 If you want to know what makes a brand tick, drive its most inexpensive models in their most basic trims.

With respect to Acura’s SUV lineup, that would be this RDX. The SUV you’re looking at has zero options, which means it hits the road at just $42,190 plus freight and dealer fees yet comes packed full of high value features and is loads of fun to drive.

I appreciate the auto industry’s new focus on accident avoidance, because not too long ago the vehicles we drove were only winning such kudos for crash test survival. Of course, it’s much better to avoid an accident altogether, but even when all of these active electronics are in place the vehicle in question still needs to be capable of keeping control while braking quickly and turning at the same time if necessary, or in other words, good driving dynamics still need to be part of the package.

Agility has always been an RDX hallmark, the newest model no exception thanks to standard amplitude reactive dampers enhancing an inherently well-sorted suspension setup that consists of MacPherson struts up front and a multi-link setup in back. Together with standard all-wheel drive that sends up to 40 percent of the engine’s torque to the rear wheels in dry conditions or maintains a 50/50 torque-split on slippery surfaces, plus standard electronic stability and traction control, the RDX delivers superb road-holding capability.

Of note, AWD is only applied when necessary so as to minimize fuel consumption, and to that end the RDX’ engine employs i-VTEC variable valve timing and Variable Cylinder Management, the latter shutting a bank of cylinders down when cruising or otherwise not exerting as much energy, therefore helping the RDX achieve a five-cycle rating of 12.4 L/100km city, 8.7 highway, and 10.7 combined, which is very good for a powerful V6.

Yes, standard six-cylinder performance is just one more RDX bonus, the SUV’s 3.5-litre V6 capable of 279 horsepower and 252 lb-ft of torque, plus most importantly in the luxury class, smooth, quiet operation. Most will agree the low NVH levels of a V6 are preferable over a four-cylinder when refinement is at stake, which is one of the reasons this entry-level RDX feels more upscale than its base competitors.

Put right foot to the floor and the surge of power and wonderful sounds emanating from ahead of the firewall and exhaust behind bespeak performance SUV, the paddles on the steering wheel and aforementioned agile handling combining for a truly sporty experience from the driver’s seat. Zero to 100km/h takes a mere 6.0 seconds, the RDX’ well-proven six-speed automatic plenty responsive to input when Sport mode is engaged, the entire SUV loads of fun when pushed hard.

Seriously, the biggest challenge is keeping the RDX to the posted limit, as it loves to go no matter if you’re zipping around town, hitting the highway, or heading up to the ski hill on a serpentine mountain road. Handling is superb and braking strong, while the ride is firm in the Germanic sense, but never jarring. The body structure feels extremely tight and solid, easily up to the standards of its premium competitors. Dial back the joy meter to normal operation and the RDX returns to its comfortable, relaxed self, a terrific SUV for running errands around town or hitting the road on the weekend.

To that end the multi-adjustable front seats are very comfortable, plus two-way heatable in base guise and ventilated in upper trims. I had no problem finding the ideal driving position, the two-way powered lumbar support fitting the small of my back perfectly, while the tilt and telescopic steering column allowed for plenty of rake and enough reach to satisfy most any body type.

I found the rear seating area comfortable and roomy too, the outboard positions particularly supportive thanks to nicely formed lower back cushions. I had about six inches ahead of my knees when the front seat was set for my five-foot-eight frame, and approximately four inches above my head, plus another four inches next to my outside shoulder and hips. It wouldn’t be difficult to get three abreast comfortably, although it’s nicer for two as the centre armrest is ideally placed for comfort and also includes dual cupholders.

An RDX forte is cargo management, Acura providing a generous 739 litres (26.1 cubic feet) behind the 60/40-split rear seatbacks and 2,178 litres (76.9 cubic feet) when they’re folded forward, which is extremely easy thanks to standard sidewall-mounted levers. Tug one and that side immediately flips down, followed by a carpeted flap covering the gap between the seat base and cargo floor that would otherwise eat wayward groceries. The cargo floor isn’t completely flat when folded, with the portion above the seats canting upward, but the convenience is worth a slight rise in the middle. The cargo area is nicely finished, with high-grade carpeting on the floor, seatbacks and sidewalls, while chromed tie-down rings are placed in each corner to secure large, loose items.

Speaking of interior refinement, the passenger compartment is much nicer since the RDX was updated for the 2016 model year, with more soft, pliable synthetic surfaces including the entire dash top, most of the instrument panel, the door uppers and inserts, etcetera, although the primary instruments still feature two analog dials bookending a colour multi-information display at centre.

The smallish five-inch infotainment system really gives this base model away, however, but that doesn’t mean it’s not serviceable. It gets a clear backup camera with guidelines and other useful functions such as display interfaces for audio, Bluetooth phone settings, car feature settings, and you can even set up individual wallpapers. Additionally it includes a brightness meter, and just below is a small LCD screen for temperature functions.

Other RDX shortcomings include hard plastic roof pillars instead of class-average fabric and a few more hard plastic surfaces elsewhere than most rivals. Still, the leather-like door panels and armrests are a cut above, the RDX balancing its yin with its yang quite well.

In fact, the steering wheel is particularly good, with a sporty thick leather-wrapped rim and large nicely fitted switchgear on the spokes, while the shift knob gets wrapped in classic baseball-stitched leather, as does the skirt below. Plenty of satin metal and chrome accents can be found throughout, the RDX a great place to wile away the morning commute.

No matter how you trim it out the RDX is a very good choice in the compact luxury SUV segment, something that hasn’t gone unnoticed by Canada’s premium buyers. They purchased 8,047 last year, which put it second to just one competitor, Audi’s Q5 that found 8,313 buyers. These two have been fighting over top spot for years, interestingly leaving Mercedes, BMW, and every other luxury brand far behind in the process. Of note, our American friends voted it number one with their wallets in 2014, 2013 and 2012, while we made it most popular in 2010.

It’s difficult to knock the RDX, as it’s strong on styling, performance, quality, refinement, features, safety, and value, all adding up to a major success in the compact SUV segment.