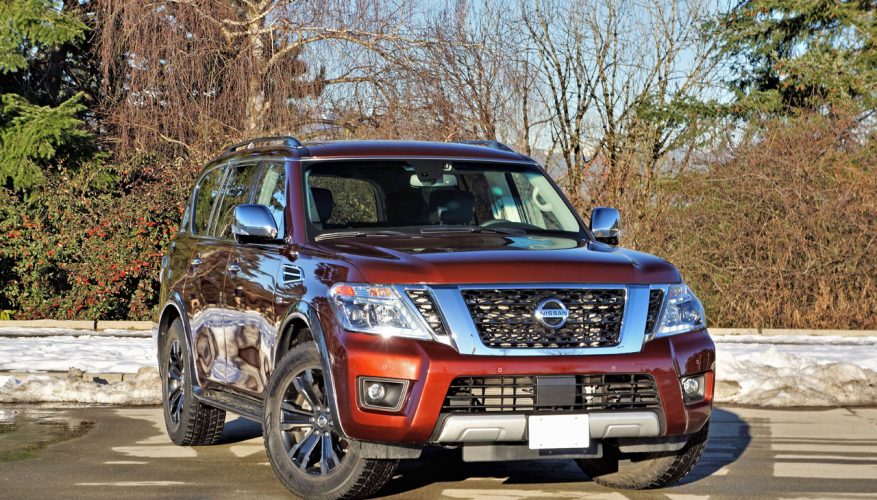 By: Trevor Hofmann
You may not realize, but Nissan’s two northernmost North American markets just had a year worth celebrating. No, I’m not talking about Nissan Canada’s best-ever sales of 122,059 units or the Japanese brand’s US division that did likewise with 1,426,130 deliveries. Come to think of it, Nissan’s bigwigs might not even be aware of the somewhat smaller party going on down the hall in the full-size truck-based SUV department, but 2016 was the first year the Armada SUV outsold Toyota’s Sequoia.

The numbers won’t likely get Nissan’s bean counters jumping for joy, with 716 Armadas sold last year compared to 697 Sequoias in Canada, plus Nissan’s US division managing to move 13,834 off dealer lots compared to just 12,771 of the big Toyota. After the first month of 2017 Nissan USA has kept up its momentum with 1,908 Armadas down the road compared to a mere 1,146 Sequoias, so Nissan Canada had better get its act together because Toyota is once again out in front with 65 Sequoias to 62 Armadas. And you thought accounting was boring?

There are numerous races like this going on in the auto industry, some gigantic like Camry and Accord versus Altima and Fusion within the massive mid-size sedan segment, where the Altima is currently gaining ground in Canada despite most rivals spiraling downward, and others smaller like Micra vs everything else in the subcompact city car class, in which the tiny Nissan sold more than all others combined last year. Within the larger subcompact class Nissan’s Versa is strongest overall in the U.S., whereas Rogue is one of the compact SUV segment leaders in both markets; ditto for the Murano and Pathfinder tag-team within the mid-size SUV class.

So why has the Armada had its best year ever? Large SUV sales were strong in the U.S. and Canada last year, driven by lower fuel prices in most jurisdictions, but even more importantly the 2017 Armada arrived in September as an entirely new model last year, and Canadian sales immediately jumped from 23 units in August to 112 the next month, with the rest of the year mostly following suit (FYI: US Armada sales went from 514 units in August to 1,712 in September, with December’s sales a staggering 2,474 units).

The irony is that our brand new Armada is now a seven-year old design, well beyond the usual product lifecycle stale date. It’s been called other names in different markets, such as Safari in Japan and Patrol elsewhere, while the previous first-generation Titan-based Armada soldiered on here. Savvy badge-engineering fans (or haters) will immediately notice the new Armada as a convincingly restyled version of Infiniti’s QX80, which entered our market as the QX56 back in 2010 when the then new sixth-generation Safari/Patrol arrived on the global stage (code name Y62).

Most of us have seen Nissan Patrols before, albeit the majority being fifth-generation models or earlier and not in the metal, but instead while watching 24-hour news stations with big, bold, black “UN” lettering painted on the sides, or on the same stations being used for everything from ambulances and police vehicles to military troop carriers, the big and very capable SUV used for just about every type of public and clandestine activity throughout the world.

On that note I just spent the past two months at my home away from home, Manila, Philippines, where our North American-spec Armada is sold as the upscale Patrol Royale alongside the previous generation Patrol Super Safari. If you can afford a PHP 2,795,000 Super Safari in the Philippines you’re doing very well, and if you can step up to a PHP 3,990,000 Patrol Royale you’re rich. In Canadian dollars we’re talking approximately $72,600 for the former and $103,700 for the latter at the time of writing, taxes in. Even when comparing apples to apples that’s a lot of green. The Canadian-spec base Armada sells for $64,248, which reaches just over $77k with freight, fees and taxes added, but that’s still $26k less than in the Philippines, a country where the average per annum take-home wage is PHP 545,040 (CAD $14,166). Suffice to say you won’t see many Patrols running around town, despite the millions of SUVs in Manila alone, but those rarities that pass by certainly garner a lot of attention and respect.

Despite the recent jump in Canadian sales the Armada remains rare here too. Its record-breaking 716 deliveries were infinitesimal compared to the segment sales leaders, Ford selling 3,729 Expeditions during the same 12 months and General Motors finding 5,235 buyers for its Chevy Tahoe/Suburban duo plus 5,446 for its GMC Yukon/XL, resulting in a grand total of 10,681. Hard to believe, but GM sold more full-size truck-based SUVs than Chevrolet Traverse and GMC Acadia mid-size crossover SUVs, so it’s big business for the Detroit automaker. At least this shows a promising upside for potential Armada sales.

Styling always plays a big part in pushing trucks and SUVs off dealer lots, and most shouldn’t find the Armada’s design as polarizing as the more organically sculpted QX80 so I can’t see visuals being a dealer killer. I like both, but must admit the Armada’s more rugged, upright, traditional SUV appearance works best for me. Yes, I wish the two SUVs didn’t share identically shaped side fender vents, this being a rather lazy carryover design element that’s only passable due to unique chromed covers, but this styling shortcut isn’t a deal killer either. In the end I’d choose the Armada because it’s the real McCoy, a Patrol merely wearing another name for better North American name recognition, and the Patrol is as revered in 4×4 circles as Toyota’s various Land Cruisers, Land Rover’s Defender, and Mercedes’ G-wagon.

To Nissan’s benefit, the Armada is quite a bit nicer than all of its current competitors. I’m talking about the aforementioned Yukon, Tahoe, Suburban, Expedition, and Sequoia, not necessarily the G-Class, and I can’t really say about the Land Cruiser as it’s not sold in Canada. The Armada’s interior might even be too good, or at least I’d feel that way if I were an Infiniti dealer. Sure it uses faux wood instead of genuine veneers, less sumptuous leathers, some lower end plastics here and there, and not as many base features, but all of its roof pillars are fabric-wrapped, padded and stitched soft touch synthetics cover most of the dash top, the instrument panel, the door skins and more, satin nickel and chrome accents highlight key areas, and it certainly was quiet. Unlike the others it’s up against there’s no cheap pickup truck components marring a near premium experience either, the new Armada not related to a pickup in the way the GM, Ford and Toyota SUVs are, and the previous Armada was. To be clear, it now rides on Nissan’s global large SUV platform and gets built alongside the QX80 in Kyushu, Japan, rather than Canton, Mississippi where the Titan and full-size NV commercial vans are produced. President Trump and his minions may not appreciate this bit of news, but those who appreciate Japanese quality will.

My tester was in top-line Platinum trim, a $5,750 charge over the base SL for a total of $69,998 plus freight and fees. A shortlist of Platinum features includes speed-sensitive power steering, unique machine-finished 20-inch alloys on 275/60R20 all-seasons, a windshield wiper de-icer, double-stitched leather door trim, ventilated front seats, heatable second-row seats, XM NavTraffic and NavWeather, a rear entertainment system with dual seven-inch monitors built into the backsides of the front headrests as well as wireless headphones, blindspot intervention, plus lane departure warning and intervention, while no-cost second-row captain’s chairs, included with my tester, are also available.

It’s amazingly comfortable, with front seats that are amply large for most body types and adjustable enough to find the ideal driving position, while the Armada provides a commanding view of the road from all angles. My tester’s optional second-row captain’s chairs were just as comfortable as those up front, with loads of legroom and headroom galore, while the rear centre console featured a comfortable leather armrest/storage bin lid and dual cupholders. The third row has enough width and seatbelts for three-abreast seating, not to mention plenty of space for adults with decent legroom too. This means it’s good for seven occupants, whereas you can fit eight with the standard 60/40-split second-row bench. It’s a true full-size SUV, along the lines of the aforementioned Yukon/Tahoe, Expedition and Sequoia, the new Armada actually a bit longer and wider than the outgoing model.

If you regularly load your SUV up with gear you’ll appreciate the Armada’s size, its 470 litres (16.6 cubic feet) of cargo carrying capacity behind the third row meaning you can fill it up with friends and family and still have space for cargo, while power-folding those rear seatbacks forward results in 1,494 litres (49.6 cubic feet) of load-toting space. As for those trips to the hardware store, you shouldn’t have any problem fitting building materials into its 2,692-litre (95.1 cubic-foot) maximum hold, while there’s additional storage under the load floor too. Still, all of these measurements make it smaller than the old Armada inside, partially because the new SUV’s roof is a lower, and while I’m complaining the powered rear seats are painfully slow, just like the QX80’s.

The old model’s 4,128-kilo (9,100-pound) tow rating was higher too, but most won’t have a problem dragging along a camper or boat behind the new Armada, its 3,855 kilos (8,500 lbs) of maximum trailering weight still impressive. Its solid stance and beefy standard 5.6-litre V8 are key reasons it’s so capable, which at 390 horsepower and 394 lb-ft of torque is 73-horsepower and 9 lb-ft stronger than the previous model, and more importantly the most powerful base engine in its class. Even so it’s acceptably efficient on fuel at a claimed 17.5 L/100km city and 12.9 highway, which means it’s thriftier than the Sequoia but thirstier than its domestic competitors.

It’s certainly entertaining to drive with strong acceleration from standstill and superb passing power, its seven-speed automatic with manual mode playing an important role here, while it handles nearly as well as the seemingly more sport tuned QX80. Even more important its ride is sublime, this not unusual with body-on-frame SUVs, the new Armada’s frame rails some 40 mm wider than the previous iteration’s for added strength and stiffness. Structural rigidity has actually improved by 20 percent, this aiding everything from ride quality, handling, interior quietness, which also benefits from acoustic glass all-round, crash worthiness, and off-road capability.

As noted earlier, the Armada’s identical global donor SUV is legendary for its mountain goat-like 4×4 prowess, and while I find it difficult to imagine anyone wanting to scratch up my tester’s gorgeous Forged Copper paintwork and stunning set of rims the SUV’s standard full-time four-wheel drive and two-speed transfer case with available low-range is just what’s needed to crawl over, around or through almost any obstacle an off-road enthusiast could find, while its 234-mm (9.2-inch) ground clearance makes it lofty enough to walk over protruding rocks and stumps that could hang up lesser utes, plus anything that makes contact should be repelled by standard skid plates. Other specs worth noting include a 20.9-degree approach angle, 20.7-degree break-over angle, and 22.3-degree departure angle.

I don’t know about you, but with 4×4 cred like that I’d send away for a set of Patrol badges if this were my Armada, just to bestow upon it the legendary character it deserves. That Nissan’s North American operations didn’t comprehend the opportunity to play up the Patrol name is a bit baffling to me, especially considering many of its buyers will be hardworking successful immigrants that originally hailed from other parts of the world more familiar with the name, but either way this big utility will be more popular than its predecessor. It’s an altogether better and more capable SUV after all, not to mention one of if not the best in its full-size volume branded SUV class.
©(Copyright Canadian Auto Press)
Car Shopping Tools