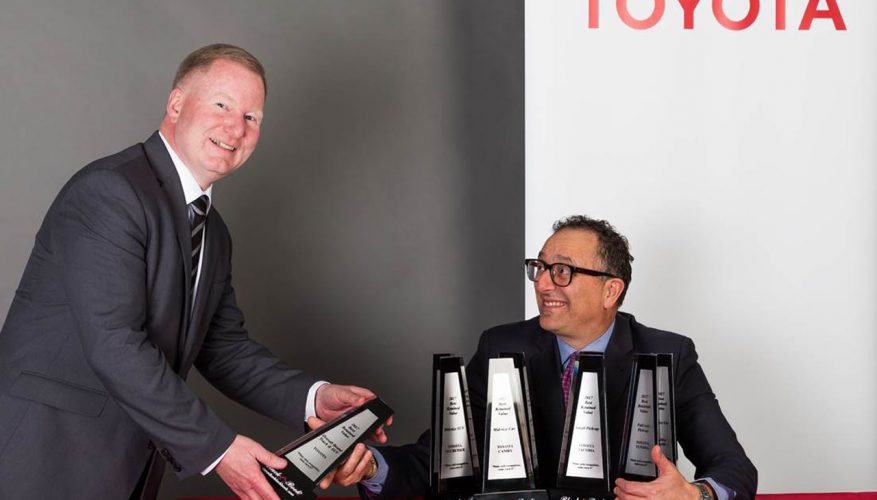 first place in a given category with a discontinued model?

Such was the case for both Toyota and Volvo whose FJ Cruiser and XC70 took first place in the “Midsize SUV” and “Entry Luxury Car” categories respectively, yet the FJ Cruiser hasn’t been available in our market since the last eight examples trickled away in 2015, and the XC70 ended its run last year with just one 2016 model leaving a single Volvo showroom last month.

More important to Canadian auto buyers are currently available new models that made the grade, because the real price paid for a car is the difference between the cost of purchase and what’s left over when that vehicle is traded in or sold later.

“After a decade of presenting these awards, we’ve established that it is necessary to recognize the brands that really excel in terms of retained value, across all their products,” said Brad Rome, President, Canadian Black Book. “That said, our number one priority in presenting these awards, is to help consumers know what models and brands provide the best opportunity to save money in the long term.”

Important, while called the “2017” Best Retained Value Awards the vehicles in question were from the 2013 model year; hence the reason many are discontinued. Vehicle values are tracked over four years, which involves CBB “analysts scouring hundreds of thousands of sales transactions and other data points from live auctions, online auctions, dealership and other proprietary sources,” said the third-party analytical firm in a press release. Prizes get awarded to vehicles that maintain the highest percentage value when compared against their original Manufacturer Suggested Retail Price (MSRP).

It should also be noted that retained (or resale) values are subject to many factors, from the strength of a brand and/or model within the pre-owned auto market to exactly where a given model is in its lifecycle (older designs awaiting refreshes can be prone to quicker devaluation), to a vehicle’s MSRP and the perceived value associated with that price, or for that matter a vehicle’s popularity amongst fleet buyers (especially rental fleets) to others’ lack of popularity overall, while buying patterns can also be dictate by outside forces such as fuel prices, so a vehicle nameplate that doesn’t make the top three in its category shouldn’t be seen as a knock against the current model’s future performance, but if a vehicle regularly makes top three it may be a wiser choice from a financial perspective than competitors that never see the podium.

Either way, with a pre-owned vehicle market exceeding 2.8 million units and total value of $38.9 billion, according to DesRosiers Automotive Consultants, getting it right is critical for automakers and auto retailers.

Surprise, surprise, on this 10th annual 2017 Best Retained Value Awards list Toyota is once again the number brand with eight first-place finishes, the Japanese carmaker’s Prius C, Camry, Avalon, Sequoia, Tacoma, Tundra, and yes that FJ Cruiser just mentioned deemed best at holding their values compared to competitive offerings. More on that FJ Cruiser, it has proven to hold 83 percent of its original MSRP, the highest percentage of any winning vehicle ever recorded by CBB. Toyota’s Tacoma came close to matching the FJ by holding 82 percent of its original MSRP after four years, this breaking the previous all-time high of 79 percent held by the Jeep Wrangler, which it should be noted also retained 82 percent of its value. This is the seventh straight win for the Wrangler, and the eighth consecutive first place finish for the Tacoma and Toyota’s Tundra.

“At the heart of the great product we deliver to Canadians is our commitment to adding value to the overall ownership experience,” said Larry Hutchinson, President and CEO of TCI. “These awards are deeply meaningful because they speak to the long-term benefits our customers enjoy across our broad line-up of vehicles, including exceptional quality, great fuel economy and lower cost of ownership.”

Toyota has received 49 CBB awards since 2010, whereas its closest competitor has only claimed 12.

Of note, Toyota’s luxury division Lexus didn’t have a single category winner once again, but took home more third placements than any other brand with four to its credit, while it also saw a number of models move up through the ranks, others that were new arrivals replacing rivals this year, and a couple merely trading places.

It’s certainly not unusual to see Porsche on top of premium categories, its Panamera four-door coupe taking top honours within the “Premium Luxury Car” class, the Boxster shoving its Cayman sibling off the board by scooping first in the “Premium Sports Car” segment, while the 911 came in second and the German brand’s Cayenne held on to its “Midsize Luxury SUV” crown.

Audi achieved multiple victories too, winning the “Luxury Car” prize with its A7, while also earning second place in that category with the A5, although lamenting the loss of third for its A6, which was removed by Lexus GS, while the Q5 once again ran away with the “Compact Luxury SUV” segment, and TT held on to second in the “Sports Car” class, although it should be noted the R8 was replaced by Nissan’s GT-R within the “Premium Sports Car” category, and the Q7 was punted right from first place to oblivion in the “Full-Size Luxury SUV” segment by the Mercedes-Benz G-Class that had to move up two places to do so. Altogether, VW AG’s Audi and Porsche brands swept five categories for second place amongst automakers.

Along with the G-Class claiming victory in the “Full-Size Luxury SUV” category and the aforementioned GLK earning runner up status, Mercedes-Benz switched places with Nissan’s NV to take top spot in the “Full-Size Van” segment, while its CLS-Class dropped a place to make way for the Lexus LS in the “Premium Luxury Car” category.

Dodge and Jeep are the only domestic winners

Just like VW AG, FCA (Fiat Chrysler) is also a perennial auto group winner, both its Dodge Challenger and Jeep Wrangler maintaining their titles for the “Sports Car” and “Compact CUV” categories for six and seven consecutive years running respectively (although anyone who calls a Wrangler a crossover utility vehicle had better give their head a shake).

“FCA continues to lead the way for retained value among domestic brands,” added Rome. “The Challenger and Wrangler are perennially bringing home Canadian Black Book awards, which speaks to their overall desirability.”

Some bad news for the Windsor, Ontario based manufacturer is their Dodge Charger being demoted to second behind the aforementioned Avalon that moved up one, plus the Jeep Compass getting bounced right out of third by the Toyota RAV4, and the Dodge Durango also shunted off the grid after being in second place in the “Full-Size SUV” class, replaced by GMC’s Yukon XL.

Other category winners include Subaru’s Crosstrek in the “Compact” class, the Impreza snagging third place as well; Honda Odyssey relinquished dominance in the minivan sector by allowing Toyota’s Sienna to share the prize; and Nissan’s NV200 arrived on the commercial scene to take home first in the “Compact Commercial Van” class.

An honourable mention has to go to Honda for being the bridesmaid more often than the bride, its Fit falling from first to second amongst sub-compacts, the Civic new to the compact crowd in second place as well, the Accord maintaining number two within the mid-size segment, the Ridgeline falling one spot amongst small pickups to third due to an upward move by Nissan’s Frontier, and the CR-V unceremoniously booted out of the compact CUV segment altogether by the aforementioned near cult-classic Nissan Xterra.

Behind Lexus’ third-place dominance was Subaru with two shows for the previously noted Impreza and Outback to go along with its winning Crosstrek, but even more impressively the automaker won the first-ever Best Retained Value ‘Overall Brand’ Award in the Car Category.

As you might have guessed, Toyota took home the Overall ‘Truck/SUV’ Award, while Porsche unsurprisingly earned the Overall ‘Luxury’ Award.

Of note, Best Overall Brand Award winners are chosen by averaging the retained value of each brand’s entire vehicle lineup over four years, with the highest average in each of three categories awarded.

This in mind, Toyota should be commended for achieving the most wins over the Best Retained Value award’s 10-year tenure, with nine of those years to its credit.

“Depreciation is the single largest expense of owning a vehicle, more than gas, maintenance or insurance. Understanding your vehicle’s retained value is extremely important for anyone researching to buy, sell or trade-in any vehicle,” says Brian Murphy, VP Research and Editorial, Canadian Black Book.

To help appreciate how important it is to find out which brands retain their value best, third-party analytical firm J.D. Power and Associate’s monthly PIN Automotive Market Metrics report stated that 54 percent of auto loans are 84-month terms or longer, with 43 percent of all car deals involving a trade-in. Critical to your personal financial health is understanding that a shocking 30 percent of those deals finalize with trade-ins worth less than their outstanding loans. The CBB Retained Value Awards make clear the importance of factoring depreciation into your purchasing decision, especially when it comes time to negotiate for your next vehicle.

The biggest losers include some surprising and unsurprising names

Take note, popular auto brands that didn’t include a single model on the 2017 Canadian Black Book Best Retained Value Awards list in either first, second or third place include Fiat, Hyundai, Mazda, Mini, Mitsubishi, Scion (now discontinued), Smart, and Volkswagen amongst mainstream volume brands, plus Acura, BMW, Buick, Cadillac, Infiniti, Jaguar, and Lincoln amongst luxury brands. Again, it should be noted that retained values are subject to many factors, so therefore if a brand doesn’t appear in this year’s Best Retained Value Awards summary it shouldn’t be seen as a total negative and doesn’t fully reflect future performance.

For instance, Mitsubishi’s Lancer was third amongst compacts last year, while Acura’s CSX and RDX made the list the year prior. Hyundai’s Equus was also a 2015 Best Retained Value Awards runner up, as was Volkswagen’s GTI, while the GTI was also recognized in 2014, as was Volkswagen’s Beetle, CC, Golf and Passat, plus Buick’s LaCrosse, BMW’s 5 and 6 Series plus its Z4, as well as Infiniti’s EX (QX50) and FX (QX70).

The record high results mentioned earlier are reflected in overall used vehicle value performance last year. After analyzing data used for this year’s awards, CBB concluded that wholesale values increased by an average of one percent across the board, with an average Canadian retained value of 50.6 percent after four years.

“These new records are truly astonishing achievements, considering the average vehicle today loses around 30 percent of its value in the first year alone,” added Murphy. “My best advice to consumers is to consider those vehicles that have a history of strong value retention, to minimize the inescapable effects of depreciation on your bottom line.”

Vehicle types with the lowest depreciation in 2017 were small pickup trucks that retained 73 percent of their average MSRP over four years, full-size luxury SUVs at 60 percent, full-size pickup trucks at 59 percent, and full-size SUVs at 58 percent.

On that note, sub-compact cars held the least amount of their value at 37 percent.

List of 2017 Best Retained Value Awards winners and runners up (with notes):