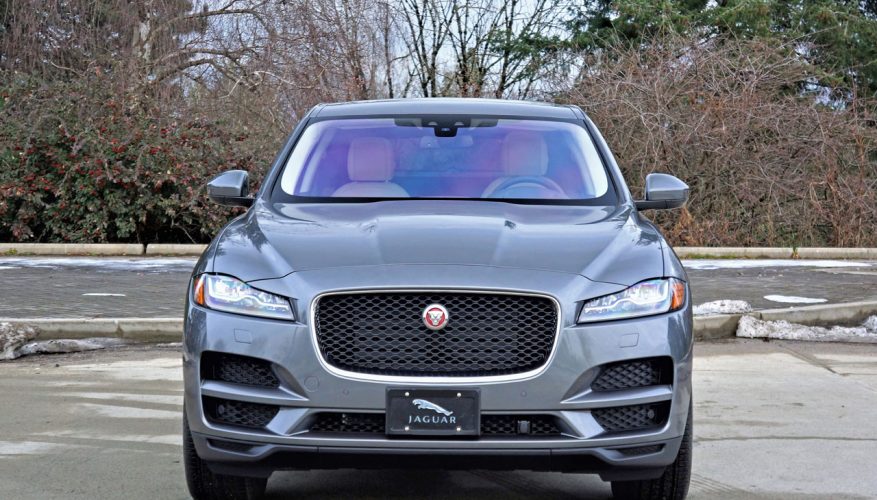 By: Trevor Hofmann
In life, it’s best to expect the unexpected. All too often that phrase follows bad news, but once in a while a positive surprise seems to set everything right in the world again.

Jaguar’s new 20d turbodiesel four-cylinder isn’t about to get Rona Ambrose high-fiving Trudeau or Hillary warming up to Trump, but it should be good news to disenfranchised Audi Q5 TDI, BMW X3 28d, and Mercedes-Benz GLK250 BlueTec owners still wishing and hoping they could trade up to “clean” diesel performance. We all know the Dieselgate story that saw VW group’s oil burners leave most global markets in shame, and by know many will also know BMW and Mercedes no longer sell diesels in North America, so it came as a pleasant surprise to see Jaguar, of all brands, show up with a diesel of its own this year.

Unlike its four-cylinder gasoline engines that are sourced directly from previous parent company Ford Motor, as well as Jaguar’s V8 that was co-developed with blue-oval engineers and used in Ford, Lincoln and even Aston Martin cars, and the V6 that spawned from the just noted AJ-V8 engine design, the British brand’s new Ingenium diesel has been engineered completely in-house at Jaguar’s Engine Manufacturing Centre in the West Midlands, UK.

The new 2.0-litre, four-cylinder turbodiesel was first introduced in the new 2017 XE and redesigned 2017 XF, and now is part of the all-new 2017 F-Pace lineup. Jaguar says the 20d is the brand’s most fuel-efficient engine ever, capable of achieving up to 75 Imperial-mpg (3.7 L/100km) combined city/highway in the XF, although our more conservative Transport Canada five-cycle rating system pegs both that car and the smaller XE at 6.9 L/100km combined, and the F-Pace at 8.1. I’m not sure what type of hypermiling techniques Jaguar’s British team was using to initially test the engine in the XF, but the Canadian numbers are still superb for luxuriously equipped compact D-segment to mid-size E-segment sedans, while the near mid-size F-Pace’ fuel economy, fully rated at 8.9 city, 7.2 highway and 8.1 combined makes it the most efficient non-hybrid in the class. What’s more, if you spend a lot of time on the highway the F-Pace 20d is number one overall, by a long shot.

On that note, I’m not sure why fuel-economy isn’t more of an issue these days, especially in some markets like Vancouver on one side of the country and St. John’s on the other, where gas prices aren’t much better now at $53 per barrel of crude than they were at $100. Sure we haven’t seen pump prices of $1.40-plus per litre for a few years, but many Canadian jurisdictions are regularly paying more than $1.25. Let’s remember that national average gasoline prices hovered between $0.70 to $0.75 in 2000 when hybrids first arrived and diesels were selling especially well, and were somewhere between $0.86 and $1.04 (depending where you lived) at the end of the last decade, when hybrids were gaining popularity and diesels made up more than 50-percent of some manufacturers’ business, so based on that we should now be buying up hybrids, EVs and Jaguar’s sole diesel offering at a fast rate considering last month’s average pump prices, which were lowest in Edmonton at $0.90 and highest in St. John’s at $1.30 (Vancouver was just over $1.20, Toronto almost $1.05, and Montreal just above $1.17). Topping that off, the very reason gas prices have fallen slightly is the aforementioned price of crude, which has put our economy in turmoil, another reason we should be considering fuel economy more than ever.

I think Jaguar is wise to risk a new diesel in a market that’s still reeling from Dieselgate, as our economy doesn’t seem ready for full recovery and the U.S. appears as if it’s nearing the end of the biggest economic bubble in history. In other words, they need a trump card (excuse the expression) that differentiates them from the rest of the luxury market and plays into our need to save money. Most people will no longer buy into the environmental benefits of diesel despite Jaguar’s marketing touting the new turbodiesel as “Environmentally friendly. Lowering harmful gas emissions including CO2 and nitrogen oxides,” which is likely founded in the argument of more distance covered using considerably less fuel, which certainly helps. For me, it’s the way the 20d drives.

If you’ve never experienced a modern turbodiesel powerplant you really must, as they’re nothing like the smoky tractor engines of yore. Quiet, smooth, and capable, Jaguar’s 20d delivers 180 horsepower and 318 lb-ft of V6-like torque from a small and economical displacement, so you can get off the line quickly while carrying a heavy payload of passengers and cargo, whether its just the cargo hold filled with up to 685 kilos (1,510 lbs) of active lifestyle gear or a 2,400-kg (5,290-lb) trailer in tow as well. In comparison the lone hybrid in this class can’t even tow as much weight as the F-Pace 20d can haul on its back, while electrified all-wheel drive isn’t known for off-road capability either.

The ability to go wherever the road or trail takes you is a diesel trait, not that this was the primary objective of the F-Pace. That’s Land Rover territory after all, but Jaguar didn’t only provide their first SUV with legs for pavement. It boasts 213 mm (8.4 inches) of ground clearance, which is the same as the Discovery Sport, while Jag’s SUV also includes a version of that Land Rover’s off-road tweaked hill-descent control, as well as a “crawl” setting that maintains a constant low speed by adding throttle and even braking without the need of feet on pedals, leaving you to solely concentrate on steering over and around obstacles.

The F-Pace’ ability to handle high speeds has piqued more peoples’ interest, mind you, and the 20d is no different. OK granted, it’s nowhere near as quick off the line or to highway speeds as the 340 horsepower 3.5t that sprints from standstill to 100km/h in just 5.8 seconds and then on to a terminal velocity of 250 km/h (155 mph), or for that matter the 380 horsepower 3.5t S hits the first mark in just 5.5 seconds and is similarly speed limited. Instead, the 20d takes a leisurely 8.7 seconds to do likewise before topping out at just 208 km/h (130 mph), but it feels almost as agile through the corners as its more sporting siblings.

My tester was upgraded with $1,000 worth of gloss black 19-inch alloys on 255/55 Continental Cross Contact LX Sport all-seasons in place of the 255/50R20 Goodyear Eagles underpinning my previous 3.5t R-Sport loaner, but take note that 19s are standard, these wheels simply done out in a jazzier finish. Jaguar offers 20- and 22-inch wheel sizes in both silver and black or combinations of both, plus numerous designs, so take your pick no matter the trim chosen.

On that note, the F-Pace 20d can be had in Premium, Prestige, or R-Sport trims, my tester riding the middle line in Prestige duds this time. That means it gets HID headlights, chrome side window surrounds, interior ambient lighting, a powered steering column, leather upholstery, four-way powered front lumbar support, heated front seats, front and rear parking sensors, and navigation over the base Premium, but the lesser model is where the majority of goodies are found.

The spare tire meant I wasn’t cruising on run-flats, a bonus for both handling and ride quality, the latter very nice for such a sporting SUV and the former superb, as noted. The F-Pace might be the best compact performance utility on the planet, or at least it’s tied with Porsche’s Macan when suited up in aforementioned R-Sport or S trim. It feels mighty through the curves in 20d guise too, the SUV’s aluminum double wishbone front suspension and unique subframe-mounted multi-link setup in back joining up with class-exclusive bonded and riveted aluminum-intensive construction to help lighten and stiffen its body structure for a nimbler and safer SUV.

This helps straight-line performance as well, the engine pulling especially well from low revs, which makes for less shifting than a gasoline-powered equivalent would. Paddles are standard just the same, this brought about by JLR’s near complete abandonment of gear levers, a rotating dial powering up out of the lower console instead. The transmission uses eight forward gears, like most in the premium segment, and combines smooth operation when driving at a more relaxed clip and snappy response when pushing harder in Sport mode. Eco mode helps eke the most from its 60-litre fuel tank, a feature I used more with the 20d than when strapped into the 3.5t, while auto start/stop shuts the engine off when it would otherwise be idling, saving yet more fuel and reducing emissions further.

It’s such moments when I was able to take in the F-Pace interior, a particularly attractive mix of classic and contemporary design themes combined with rich materials and mostly good build quality. I say mostly good because Jaguar forgot to cover the primary instrument hood with anything but subgrade hard plastic, when the rest of the dash top and front facing is finished in superbly crafted leather, piano black lacquered veneer, genuine metals, and high-resolution digital interfaces.

These latter items include the head-up display atop the dash, large TFT multi-information display set within the gauge package, and sizeable touchscreen over the centre stack mentioned before, and while the second and third are impressive the first is my favourite. The convenience of having priority information projected onto the windshield in full crisp colour day or night was appreciated, especially nav directions and posted speed limit reminders, while it also warns of potential collision via forward alert. Of course, there’s also the safety benefit of not having to take your eyes off the road to read the multi-information display or infotainment screen, although these are both worth your attention when distraction isn’t an issue.

The former is big, colourful and graphically attractive, one of the nicer base systems in the class, and the latter is also large with superb graphics, especially if you like classic British scenery, a lone red phone booth standing in a field used for Bluetooth connectivity, streaming lights of a multi-lane highway at night (the M1?) for navigation guidance with 2D or 3D mapping, more of an Icelandic or Greenlandic dusk theme (then again it could be Alberta) for climate control, and so forth. The base 8.0-inch touchscreen also includes a backup camera with dynamic guidelines, text-to-voice, audio streaming, Jaguar InControl Apps and more.

I should probably mention the 20d Prestige can be upgraded with more features, the $3,100 Technology pack adding a fully digital and driver configurable 12.3-inch TFT instrument cluster, larger InControl Pro 10.2-inch touchscreen infotainment with enhanced navigation, and more powerful Meridian audio with digital surround sound; and a $1,000 Adaptive Dynamics pack with adaptive dampers and adaptive surface response; while standalone options not yet mentioned include a $400 heatable windshield, $200 Etched Aluminum or $400 Gloss Figured Ebony hardwood inlays, a $400 Activity Key waterproof wristband that lets you inside in place of the key fob, $350 Wi-Fi, $150 cargo area storage rails, and a $650 tow hitch.

That base price makes it the second-most expensive SUV in its compact class, something to consider for sure, but while pondering you’ll need to factor in all the standard features I noted earlier and its size, which almost lifts it into the mid-size luxury class. These attributes, plus styling to die for, gives it an edge over many peers, and is reason enough for its superb sales.

It pays to do the right thing, and in the case of building a better sport utility Jaguar has done a lot right. I recommend you put it on your shortlist.
©(Copyright Canadian Auto Press)
Car Shopping Tools