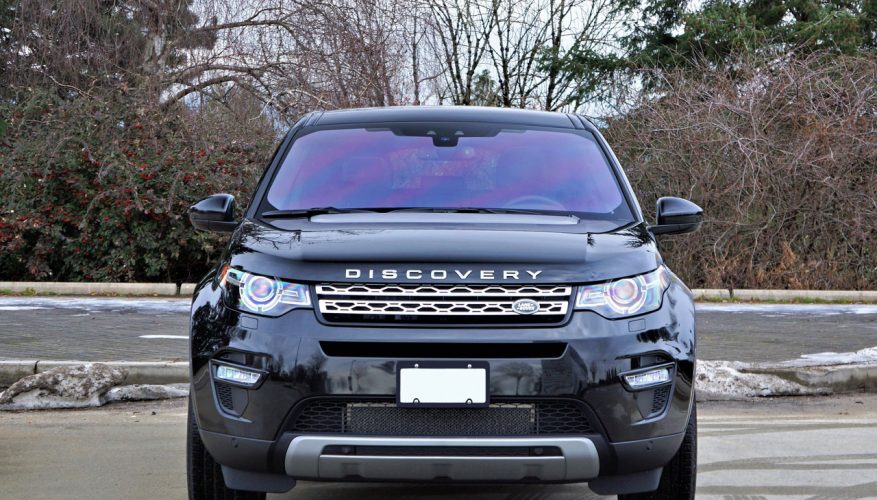 By: Trevor Hofmann
The Discovery Sport has two very good things going for it. One, it’s a much better vehicle than the LR2 it replaced two years ago, and two, it’s riding a wave of SUV popularity that shows no end in sight.

The best the LR2 ever did in Canada was 1,054 units in calendar year 2007, but after nearly matching that number over its first seven months of availability in 2015 the Discovery Sport reached 2,354 Canadian buyers in 2016, making it the second most popular nameplate in Land Rover’s five-model strong lineup. I’m not by any means knocking the LR2, which was a big step up over the original Freelander, but the Discovery Sport is so much improved it deserves all of its success and more.

For 2017, Land Rover has kept updates to a minimum, but that said they’re not of minor importance. Infotainment is critical to many buyers’ purchasing decisions, so availability of the British brand’s new InControl Touch Pro touchscreen system is important. Its larger 10.2-inch display is a welcome upgrade from the already sizeable 8.0-inch base system, while its quicker processing speed and larger 60-gig solid-state hard drive means that available features such as navigation and the integrated 3G Wi-Fi hotspot work faster. The upgrade also includes an 825-watt, 17-speaker Meridian sound system, making its $2,900 asking price seem reasonable.

Speaking of useful tech, the Discovery Sport is the first Land Rover that syncs with Tile, a location resource that uses Bluetooth to monitor personal items such as keys, phones, wallets, or bags.

One of many brand traits I appreciate about Land Rover is its nod to personalization. No matter whether you’re buying a base $42,790 SE or fully loaded HSE Luxury, a full spectrum of colours is available including two standard tones, Fuji White and Narvik Black, an impressive 10 metallics at $650 each, which include the usual whites, silvers, greys, beiges, greens, a blue, and Santorini Black, my tester’s chosen shade, as well as wild Phoenix Orange and stunning Firenze Red, which was the colour of last year’s loaner. On top of this are the pricier paints just noted, the list also including Waitomo Grey. Then comes the ability to swap out body-colour mirror caps, A-pillars and the entire rooftop for Corris Grey or Narvik Black, to change the HSE’s Atlas Silver aluminized grille, undertrays, side vents and wheels for yet more glossy black, the latter in multiple styles and sizes, while the list of customizable options goes on and on.

My HSE tester was actually fairly stock this time around, keeping its upgraded aluminum-look exterior detailing in place, which I think works better when wearing black body panels. As part of its HSE upgrade it also included signature LEDs for the HID headlights as well as fog lamps, while the panoramic sunroof would be more noticeable in a lighter colour. Standard HSE features that are a little more difficult to initially notice include headlamp washers, front and rear parking sensors, a rearview camera with active guidelines, memory for the driver’s seat and side mirrors, and front seat heaters to keep the upgraded grained leather upholstery warm in winter.

Additionally, my tester increased its already improved HSE trim to include a $1,450 Convenience pack with proximity-sensing keyless access, a powered hands-free/gesture liftgate, a Homelink universal garage door opener, and an auto-dimming rearview mirror that really should be standard in this class. Additionally, a $1,950 5+2 Seating pack added a segment-exclusive third row that truly suits smaller folks best (and by that I mean I was able to fit my five-foot-eight medium-build frame into the rearmost seats when the first two rows were positioned comfortably, and didn’t feel cramped partially due to good outward visibility), plus third-row climate control venting in the ceiling, and an extra USB port back there too; a $1,400 Driver Tech pack added autonomous emergency braking, blindspot monitoring with reverse traffic detection, new for 2017 lane departure warning, and traffic sign recognition with a new Intelligent Speed Limiter that digitally nags at you if you pass the posted limit; while standalone options included ventilated front seats and heatable rear outboard seats for $800, another $800 spent for navigation, $350 for an Ebony Morzine (black) headliner, $835 worth of rubber mats and wheel locks, and the aforementioned metallic paint for an as-tested asking price of $55,225 before freight and fees.

The Discovery Sport HSE starts at $46,990, by the way, which most will agree represents good value in the compact luxury SUV segment. Its rise in sales should attest this, but more importantly than a summary of its features and options are takeaways from time spent with multiple versions of the relatively new SUV. First off, like the exterior styling the SUV’s interior is intelligently laid out in what is becoming a trademark Land Rover interior design. I call it premium industrial, in that everything appears ruggedly built with oversized dials, door pulls and centre stack buttresses, but it’s all finished to a very high level. The features just mentioned and more are trimmed in satin aluminum, most surrounding surfaces are either soft synthetic or stitched leather, and switchgear quality and damping is very good.

I especially like those dials just mentioned, three of which come filled with a colourful array of HVAC info, while the final fourth is the rotating gear selector that powers up out of the lower console upon startup. All Discovery Sports use a button for the latter process, which fires up the same Ford-sourced direct injected and turbocharged 2.0-litre four-cylinder engine no matter the trim, tuned to provide 240 horsepower and 250 lb-ft of torque. It comes attached to a class-leading nine-speed automatic transmission with standard steering wheel paddle shifters, which sends the engine’s thrust and twist to a sophisticated four-wheel drive system featuring Land Rover’s very competent Terrain Response off-road system.

To be clear, the Disco Sport doesn’t include the usual Land Rover transfer case or locking differentials, but it smartly includes a bull-low capable first gear system that’s designed to limit launch speed so as to slowly crawl out of slippery situations or over obstacles, and even sports an available low-speed off-road cruise control system dubbed All Terrain Progress Control. Its relatively lofty 211 mm (8.3 inches) of ground clearance joins standard Terrain Response just mentioned, which modulates the engine, transmission, differentials, and chassis systems after selecting General Driving, Grass/Gravel/Snow, Mud/Ruts and Sand modes to overcome just about any challenge.

Land Rover claims an 8.2-second zero to 100km/h sprint time and a 200-km/h (125-mph) top track speed, which probably won’t elicit much enthusiasm from the brand’s many asphalt-burning performance fans, and will have those seeking mother nature wishing the new 2.0-litre turbo-diesel found in Jaguar’s F-Pace was on the options list. Still, I certainly never felt held back while tooling around town, the Disco Sport getting up to speed quickly and feeling faster than the conservative performance numbers imply. Even more important, the drivetrain is a miser on fuel with a claimed rating of 11.9 L/100km city, 9.0 highway and 10.7 combined.

If you’ve driven the Range Rover Evoque you’ll appreciate how fun a modern-day crossover SUV can be, although while the Discovery Sport shares its engine and core underpinnings it feels a bit more like a traditional sport utility than its smaller cousin, and most anything else it competes with. Don’t get me wrong, as it’s nothing close to the truck-like SUVs of yore, but instead it sits higher than the Evoque, offers better visibility all-round, and seems like it can more effectively tackle the wild unknown, let alone inner-city traffic mayhem. It’s plenty capable through corners when pushed as well, while its ride is generally compliant and comfortable, just the way I’m told most SUV buyers like.

If you want more exciting driving dynamics, Land Rover will include an Adaptive Dynamics suspension and an Active Driveline when opting for the $1,900 Intelligent Dynamics package, which is essentially torque-vectoring all-wheel drive with magnetic damping, and/or you can opt for the 19- and 20-inch wheel and tires packages on offer.

Options in mind, I’ve only touched on all that’s available with the HSE, the $1,200 Vision Assist pack that adds adaptive cornering headlamps with auto high beams and a 360-degree surround camera also available; as is the $2,900 TouchPro pack that adds the larger InControl Touch Pro infotainment interface along with enhanced navigation, the top-line 825-watt Meridian Digital Surround audio upgrade, and the InControl Pro Services telematics bundle; or alternatively you can get the upgraded navigation on its own, lane keep assist and a driver condition monitor that (hopefully) wakes you via visual and audible alerts if you’re falling asleep, a heatable windshield, self parking, a head-up display, Wi-Fi, InControl Apps, satellite radio, configurable mood lighting, a perimetric and volumetric alarm, a cargo cover, cargo area stowage rails, and more.

On the subject of storage, there’s a narrow gap between the 50/50-split rearmost seatbacks and the liftgate, so don’t offer rides home from the hockey rink that require third row usage. I’m guessing most will leave them lowered and only use them if needed, the process to lay them flat requiring a quick and easy tug on each seat’s pull tab to automatically drop the headrests before pushing them forward, which opens up 926 litres (32.7 cubic feet) of available space. The second row is even more conveniently split into the optimal 40/20/40 configuration, which lets you stow long cargo like skis down the middle while rear passengers enjoy the more accommodating window seats along with those aforementioned heaters if upgraded, plus when all seatbacks are completely laid to rest the Disco Sport can manage up to 1,894 litres (66.9 cubic feet) of active lifestyle gear.

Is the Discovery Sport perfect? No, it would require the previously noted diesel and its 318 lb-ft of torque for that proclamation, and even then it doesn’t surpass all of its rivals in every respect. For instance, the F-Pace mentioned earlier is sportier, as are a few others, while some competitors offer more refined interiors with more advanced digital interfaces, etc. Still, the same could be said about any of its rivals. As it is, the Disco Sport is high on my list of compact luxury class favourites, and one that I’d personally consider if in the market. I like the way it drives, the way it looks, its standard feature set, and the ability to option it out the way I’d want, all of which are reasons for it selling so well. I think it’s onward and upward for Land Rover in the compact luxury SUV class.
©(Copyright Canadian Auto Press)
Car Shopping Tools