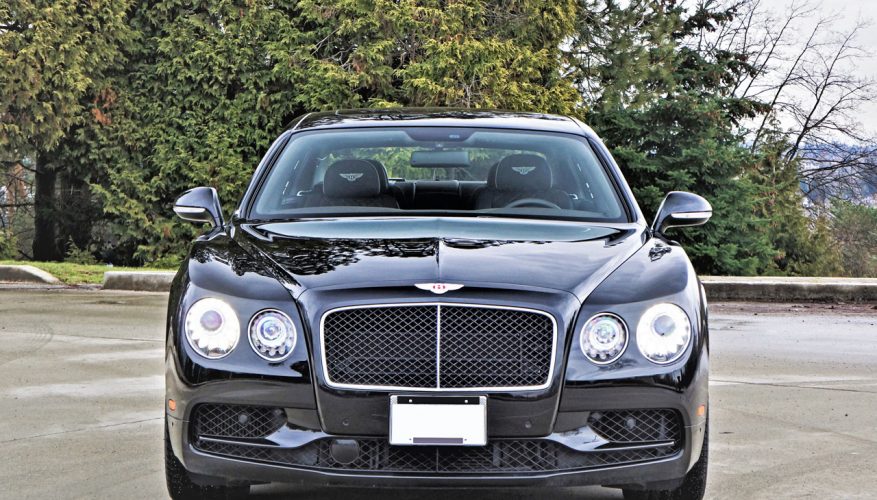 After all, the “base” Flying Spur boasts a twin-turbocharged 4.0-litre V8 outputting 500 horsepower and 487 lb-ft of torque through an eight-speed Quickshift automatic with manual mode and paddle shifters plus standard 40:60 rear-biased all-wheel drive that grips tarmac via sizeable 19-inch alloys wrapped in 275/45ZR19s, the result being a 5.2-second charge to 100km/h, a 295 km/h (183 mph) top speed, and plenty of capability through the corners. Even better, the 6.0-litre W12-powered version, simply called Flying Spur without any engine reference, hits 100km/h in 4.6 seconds before attaining a 320-km/h (199-mph) terminal velocity thanks to 616 horsepower and 590 lb-ft of torque. In other words, Bentley doesn’t make a Flying Spur that wouldn’t qualify as a sport sedan, other than simultaneously being hedonistically plush and therefore normally classified as a luxury sedan. That’s the key difference.

To be clear, the Flying Spur V8 S I most recently spent time with is just as lavishly appointed as the entry-level V8 I tested last year, even more so thanks to some upgrades, but the previous car, and earlier non-“Speed” 12-cylinder models tested, focused more on ultimate comfort and refinement than speed and agility, with their generous sporting elements only apparent when right foot hit floorboard. The V8 S, on the other hand, even makes its performance credentials known before sliding into its opulently attired interior.

The redesigned front fascia that pulls cues from Bentley’s own Continental two-door, which itself owes some aerodynamic inspiration to the brand’s World Endurance Championship (WEC) competitive GT3 race car, is shared with the fabulous Flying Spur W12 S announced late last summer, the absolute pinnacle of four-door sport sedan status, a richly appointed limousine that whisks from zero to 100km/h in a mere 4.5 seconds before maxing out at an astonishing 325 km/h (202 mph) due to 626 horsepower and 605 lb-ft of torque, this the fastest four-door in the world and therefore the ultimate sport sedan, period.

Bentley takes performance seriously, but you don’t have to spend upwards of $340k to get one of the sportiest Flying Spurs, the $285,578 (at the time of writing; it’s tied to the U.S. exchange rate) V8 S mostly looking the part and delivering extremely entertaining dynamics. Its 2,417-kilo (5,329-lb) curb weight makes it 58-kg (127 lbs) lighter than the 2,475-kg (5,456-lb) W12 S, most of that over the front wheels where the difference can be felt in wonderfully reactive steering and greater resistance to understeer, while the V8 S model’s ability to catapult away from stoplights improves by 0.3 seconds over the base model, with a zero to 100km/h time of just 4.9, which comes by way of an extra 21 horsepower and 15 lb-ft of torque for a new total of 521 and 502 respectively.

If we were measuring acceleration from standstill in stopwatch increments the V8 S costs about $7,500 per tenth over the base Flying Spur, or alternatively about $2,000 for every kilometre gained per hour due to its top speed growing to 306 km/h (190 mph), which in WEC or F1 terms might seem ruddy cheap although amongst road cars is a bit steep, still the V8 S is about much more than mere numbers on a comparative matrix, with the gains focusing more so on overall feel and drivability.

Set to Sport mode the V8 S feels eager, raring to go. Sharper throttle response seems like a shot of adrenaline at takeoff, and the exhaust note is more pronounced throughout the rev range. Likewise, the transmission snaps from gear to gear with more enthusiasm, in crisper yet still smooth increments, and then holds its chosen cog more attentively. Of course those aforementioned 20-inch Pirellis grip asphalt more adhesively, just as important for launch as in the corners, where a tauter sport suspension joins reprogrammed stability control that allows a little less stick at the rear for more fun through tight curves. Oversized rotors improve stopping power, and there was hardly any noticeable fade after repeated stomps, but take note carbon-ceramic brakes are available.

Tone things down a notch and the V8 S makes for a similarly smooth and pampering ride as its luxury-tuned sibling, this being an apropos time to enjoy the incredible attention to detail Bentley provides on most every surface you touch, knob you twist, lever you pull, and button you press. OK, some of the latter aren’t as precisely fitted or made from as high a grade of materials as a number of premium rivals in the Flying Spur’s class or below, this an area of consistent weakness with the brand, but such is sometimes the case with lower volume producers when it comes to en masse components. Look beyond the shiny black plastic bits to the mirror-finished chromed metal power window switches, the fabulous solid metal organ stops used for ventilation control, the heft of the vent louvres themselves, all of the beautifully chromed, brushed and knurled metal knobs, the same metal detailing on the paddle shifters and gear shift lever, the phenomenal woodwork throughout the cabin (or the superbly crafted piano black lacquered hardwood that comes standard in the V8 S), the otherworldly leatherwork most everywhere else, and it’s easy to let a foible or two go.

On that note Bentley has made great strides with its infotainment system in recent years, particularly for the Mulsanne and the Bentayga, and while the Flying Spur’s isn’t quite as thoroughly updated as these it’s still a fully functional system with clarity and graphics that do the job more than adequately, the backup camera with active guidelines very appreciated in a car so amply proportioned, as were the fore and aft parking sensors.

The Flying Spur is large, although nothing someone moving up from an Audi A8, BMW 7 Series or Mercedes-Benz S-Class couldn’t handle. Dimensionally it’s right in the middle of the long-wheelbase versions of these very good albeit less aspirational models, and is actually shorter and narrower than Mercedes-Maybach’s S600. Of course, Bentley builds its flagship Mulsanne that’s longer and even more extravagant, but that’s another review for a future installment, this Flying Spur V8 S delivering more than enough size, comfort and quality refinement for the majority of premium buyers.

My tester’s cabin was finished in delicious dark chocolate Burnt Oak upholstery with beige piping instead of standard all-black Beluga, the seat inserts perforated and quilted to perfection, the dash, door inlays, and other key surfaces finished in a more traditional looking Dark Fiddleback Eucalyptus. In back, yet more dark hardwood was used for two folding picnic tables attached to the front seatbacks, while the rear seats were powered with four-way lumbar support and memory settings. Like the seats up front those in back were optionally heatable, cooled, and gave a pretty decent massage too, their controls found at the side of each seat and on the backside of the front console within a removable smartphone-sized tablet that also modulates the rear compartment’s dual-zone auto climate control. As for overall roominess and comfort, you won’t be disappointed.

Most everything you could want already comes standard with the base $263k Flying Spur V8, the move up to V8 S adding the previously noted performance and exterior styling upgrades, the knurled metal shift knob and paddles, the diamond-patterned quilted seats, and a sport steering wheel. If you feel so inclined options not already mentioned can include alternative 20-inch rims or 21s, a wide choice of steering wheels, yet more wood veneers, aluminum, or carbon-fibre, a suede-like Alcantara headliner, a powered panoramic glass sunroof with solar cells to assist cabin cooling, vanity mirrors within the aforementioned picnic tables, a Mulliner champagne bottle cooler with crystal flutes (in back), Wi-Fi, a phenomenally good Naim audio system, rear entertainment with a TV tuner, powered side shades, adaptive cruise control, and much, much more.

Decadent yes, but to those in the know it’s the next best thing to the previously noted world’s fastest and therefore ultimate sport sedan; the new Flying Spur V8 S every bit as agile as the W12 S if not quite as quick, and certainly as dramatically beautiful to look at.
©(Copyright Canadian Auto Press)
Car Shopping Tools