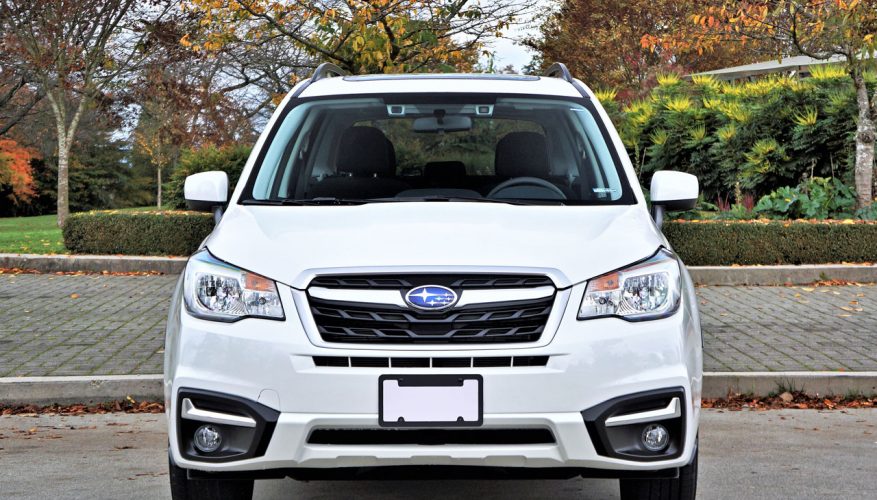 By: Trevor Hofmann
The Auto Journalist Association of Canada’s “Best New Small Utility”? Forester owners know such accolades are deserved, as do the folks working at the company’s Mississauga-based headquarters, not to mention those selling and servicing the compact SUV at the Japanese brand’s 92 Canadian dealerships, but they’ll no doubt be smiling just the same.

I’ve never been on Subaru’s payroll or a Forester owner, although full disclosure requires me admit to selling new Justys, Imprezas, Brats, Loyales, Legacys, Outbacks, SVXs, and yes Foresters way back in 1994. I’ve also had the pleasure of living with every Forester generation for weeks at a time over the last 16 years of my auto journalism career, and therefore have experienced them grow in size and sophistication first-hand, from their tall wagon-like roots to their current fully-fledged compact SUV status.

Incidentally, the 2017 Forester wasn’t the only compact SUV qualified to enter the AJAC competition, a significant update requisite for inclusion. Rather, a select group of Canadian auto journalists ranked it higher than the new 2017 Toyota RAV4, 2017 Ford Escape, and 2017 Kia Sportage. It would’ve been a tough decision, as each SUV on this list is the best of its kind, the RAV4 so good it managed to surge ahead of the Escape for Canada’s top compact SUV sales last year, while the new Sportage passed by four of its competitors to nudge up against this Forester, albeit still a couple of thousand sales behind. The Escape was the only redesigned SUV in the class to lose market share, while the new 2017 CR-V (third in sales) and Nissan Rogue (fourth) arrived too late to take part in the AJAC test.

Winning the AJAC award won’t necessarily result in more sales, the Forester ranked ninth behind the four already mentioned, as well as the Jeep Cherokee, Mazda CX-5, Hyundai Tucson, and Chevrolet Equinox, while more popular than the Kia Sportage, Volkswagen Tiguan, GMC Terrain, Subaru’s own Crosstrek, Jeep’s Patriot and Compass, plus Mitsubishi’s Outlander. Many of these will arrive with redesigned duds later this year, the compact SUV segment becoming one of the fiercest battlegrounds in the auto sector.

Of the four AJAC contestants listed, only the Kia and Ford received wholesale redesigns in order of dramatic progression (the Sportage looks nothing like its predecessor), whereas the Toyota benefited from an extensive mid-cycle update that makes it look entirely new, at least outwardly. This Subaru gets the mildest refresh, the “if it ain’t broke don’t fix it (much)” mantra seeming appropriate. Seriously, only 2.5i trims are noticeably affected and then its mostly about the lower fascia that gets wider, deeper, and more complex with a body-colour centre and larger black corner vent-like cutouts housing chromed appliques and circular fogs in my Touring trimmed tester. The brand’s hexagon-shaped grille gets a new insert too, while the headlamps receive new C-shaped LED accents and sparkle with today’s de rigueur crystal-like glitter. Around the side, new 17-inch wheels boast machine-finished spokes with black painted pockets, these unique to Touring spec, whereas the only changes made to the rear are mostly red taillight lenses, a similar set of C-shaped LEDs giving them a squared off shape when seen from directly behind. I like what they’ve done, but Subaru’s plastic surgeons certainly applied the scalpel with restraint.

If you move up a trim level to Limited, full LED headlamps with steering responsive active cornering enter the picture, but believe me I didn’t feel shortchanged one iota to be in this Touring. In fact, I wouldn’t have minded a base model, as the changes make it look better than last year’s entry-level Forester despite missing some chrome, fogs and alloys.

That base model is improved inside too, first off from better soundproofing thanks to additional insulation, better door seals, an acoustic windshield, and thicker side glass, making this the quietest Forester ever. It’s a nicely designed and detailed cabin too, filled with metallic silver accents, a soft touch synthetic dash top that wraps all the way down to the halfway point of the centre stack, plus across the door uppers and panels front to rear, contrast stitched leatherette armrests, attractive black and blue checkered fabric upholstery, excellent quality switchgear, and more.

That audio system delivers good bright highs and excellent bass response, by the way, partially due to a graphic equalizer integrated within the infotainment display featuring separate presets to quickly customize the sound for whatever you’re listening to, from dance or rock, to classical or talk.

If you’d still like more, you can move up into aforementioned Limited ($35,795) trim that adds leather in black or new Cognac Brown, driver’s side memory, heated rear seats, larger and more sophisticated 7.0-inch infotainment with navigation, etcetera, while my Touring tester and the Limited model can be upgraded with an as-tested $2,800 Technology package that adds steering responsive fog lamps (on the Touring), proximity access with pushbutton ignition, as well as Subaru’s third-generation of EyeSight active safety features that now include lane keeping assist and an enhanced pre-collision braking system to the features available on last year’s Forester, including pre-collision throttle management, lead vehicle start alert, lane departure warning, lane sway warning, reverse automatic braking, and adaptive cruise control.

A standard feature I haven’t mentioned yet is a Subaru staple, the brand’s now legendary symmetrical all-wheel drive system. Believe me when I say it’s a cut above most AWD designs, and therefore much more capable of digging your SUV (or any Subaru) out of a packed snowplow created drift or an unexpectedly deep ski hill parking lot, let alone wade you through shallow rivers, muddy logging roads, or anything else God’s country throws into your path. The Forester comes standard with class-leading ground clearance too, and when equipped with its as-tested continuously variable transmission (CVT), hill-descent control and even better, Subaru’s X-Mode off-road setting that really adds to its mountain goat character. Truly, X-Mode turns a seemingly docile crossover utility into a very handy 4×4. It’s not quite capable of keeping up with a Jeep Wrangler on a Class IV trail, but is nevertheless more extreme than any of its closest rivals, and all you need to do is push the big silver button ahead of the shifter when the wheels begin to slip or slide, leaving all but throttle and steering control up to your Forester.

That throttle continues to connect to one of the most interesting engines in the auto industry, Subaru’s horizontally opposed “boxer” flat four that sits nice and low in the engine compartment for better handling. Boxers are also inherently torque-rich; the Forester’s base 2.5-litre making a potent 174 lb-ft at 4,000 rpm as well as 170 horsepower at just 5,800 rpm. The engine works perfectly with the ultra-smooth CVT, while a six-speed manual is available in base and Touring models. Along with strong performance the base powertrain delivers good fuel economy when compared to its AWD-equipped compact challengers, my tester rated at 9.2 L/100km in the city and 7.4 on the highway, whereas manual-equipped models are rated at an estimated 10.9 city and 8.3 highway. Of note, all Forester 2.5i models receive PZEV emissions certification.

If fuel economy isn’t quite as high on your agenda as performance, Subaru offers a much more exciting direct-injected and turbocharged 2.0XT model ($33,995) with 250 horsepower and 258 lb-ft of torque, and you won’t give up much at the pump with a 10.2 L/100km city and 8.6 highway rating. Subaru adds torque vectoring to the 2017 model for a bit more agility around the corners, while all XTs get 18-inch rims to help in this respect too.

I certainly wasn’t held back by my Touring model’s Yokohama 225/60R17 Geolandar all-seasons, the little SUV feeling as nimble through the curves as its fully independent suspension with front and rear stabilizer bars was comfortable over rough patches of pavement, while its four-wheel disc brakes were plenty capable even during panic tests.

Trailers need to be kept to the usual 680 kilos (1,500 lbs) when equipped with their own brakes, or 453 kg (1,000 lbs) without, but the Forester’s cargo hold should be ample enough to limit the need to tow. Base and Convenience models get 974 litres (34.4 cubic feet) behind their standard 60/40-split rear seatbacks and 2,115 litres (74.7 cubic feet) when folded flat, whereas my Touring and the Limited trim above make do with 892 and 1,940 litres (31.5 and 68.5 cubic feet) respectively, the price paid for a powered liftgate. Of note, a handy sub-floor storage compartment allows a place to store greasy towels and gloves, or anything else you wouldn’t want to soil the carpeted load floor with.

Roominess is a Forester trait, the compact SUV quite tall and therefore accommodating for larger occupants. It’s spacious in back too. I had approximately eight inches ahead of my knees when the driver’s seat was set to my five-foot-eight medium-build body, plus another four inches above my head, while my shoulders and hips never felt cramped.  I don’t think it would be a problem to get three adults side-by-side across the rear bench, although being a compact SUV and therefore inherently narrower than a mid-size, it would be more comfortable with just two.

I can’t tell you how many people I’ve recommended the Forester to over the years, for many of the reasons noted above, as well as Subaru’s superb reputation for reliability and ultra-strong resale values. Such is why the brand enjoys unparalleled customer loyalty, most owners never leaving for something flashier or more feature filled, even those whose financial well being would allow them to step up to a costlier brand. Fortunately the new Forester offers most of the features premium buyers want for a price that’s much more grounded in reality.
©(Copyright Canadian Auto Press)
Car Shopping Tools