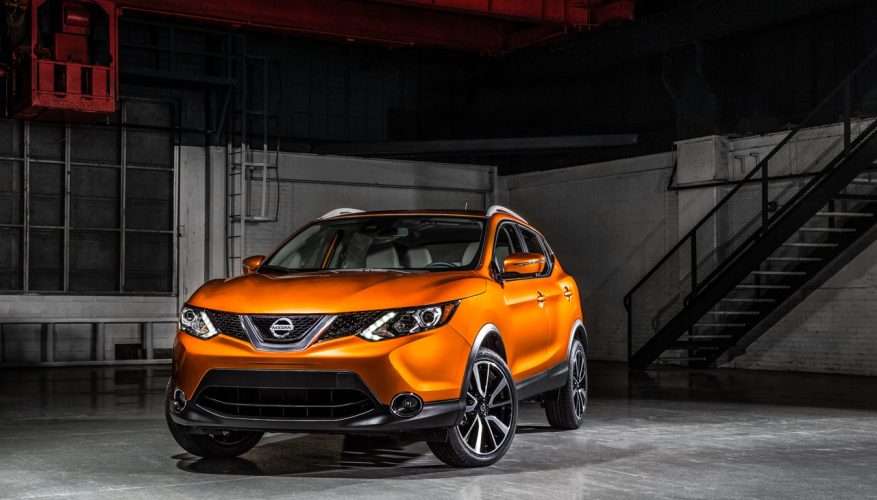 By: Trevor Hofmann
Nissan has had fun advertising the unique Qashqai (cash-kai) name in European markets where consumers have been mispronouncing it for more than a decade, smartly turning a negative into a positive with humorous radio/TV spots and online videos. From what it appears, when the subcompact SUV arrives on Canadian soil this spring it will retain its unusual global name, despite Nissan Canada’s U.S. counterpart choosing to call it Rogue Sport.

Smart move? While Canadians appreciate some differentiation from the 10-times-larger U.S. market, the reality of cross-border advertising bleed makes a strong argument for following the American narrative. Kia, which previously named its Canadian-spec mid-size sedan Magentis, because it rightly considered Canada a separate global market, eventually renamed it Optima to take advantage of marketing synergies between the two countries, however Mitsubishi’s RVR, which has long been competitive within the same subcompact SUV segment the new Qashqai will soon enter, didn’t adopt its U.S. division’s name, instead choosing Outlander Sport south of the 49th. While the choice of “Sport” for the smaller SUV probably has nothing to do with Nissan’s recent move to acquire enough shares in Mitsubishi Motors for a majority shareholder position, it definitely shows both Japanese brands are of the same mindset in the U.S.

Likely due to the unique name, Nissan Canada chose to unveil the Qashqai on the south side of the Detroit River in Windsor, Ontario, the evening before opening press day of the North American International Auto Show in Detroit.

“The new Qashqai is a great complement to the Nissan CUV lineup,” said Bert Brooks, Senior Manager, Product Planning, Nissan Canada Inc. “While Rogue has been a great success and will continue to appeal to owners with young families, Qashqai fills a need for singles and couples who want the space and versatility of a CUV, but also desire a smaller overall size for urban maneuverability like a passenger car.”

The Qashqai will fill the very narrow gap between the smaller Juke and the larger compact Rogue, which actually grew significantly for this 2017 model year. This means the Qashqai will be slightly larger than most entry-level SUVs it’s up against, such as Honda’s bestselling HR-V, Mazda’s CX-3, Chevy’s Trax, Mitsubishi’s RVR, Buick Encore, Jeep’s Renegade, Mini’s Countryman, plus Fiat’s 500X (although it could be argued the pricier Buick and Mini, and even the Fiat more specifically sell into the subcompact luxury SUV segment), and a bit smaller than Hyundai’s Tucson, Kia’s Sportage, Subaru’s Crosstrek, and Volkswagen’s current Tiguan (the new 2018 Tiguan will seat seven and target true compact SUVs), which are normally relegated to the compact category despite their smaller size. The Qashqai is also more mainstream in appearance than the unorthodox Juke, which is a polarizing love it or leave it design that’s nevertheless found its fair share of lovers since helping to initiate the subcompact SUV segment (along with the RVR) in 2010.

Of note, the Qashqai isn’t the only experienced subcompact SUV about to make a late splash on North American markets, Ford also announcing that its global EcoSport will be joining the fray for the 2018 model year, while Toyota will introduce its entirely new 2018 C-HR later this year as well. It only makes sense that Hyundai, Kia, and others will take advantage of a burgeoning subcompact SUV market segment that’s already outpacing subcompact car sales in both Canada and the U.S., brand for brand.

Comparatively the subcompact car segment has seen mostly declining sales over the same period, and much more dramatically as the subcompact SUV segment has added models. Sales of Nissan’s Versa/Versa Note and others in the class were fairly strong in 2010 despite an industry that was climbing out of a recent recession, with 81,235 delivered that year and 82,484 in 2011. Calendar year 2012 saw growth with 98,190 sales, while 95,278 subcompact car buyers anted up in 2013, and 2014 combined for a high of 99,864. Since then the market for subcompact cars has been drying up, with 78,348 sold in 2015 and just 67,529 last year.

Of note, not included in these numbers are yet smaller city cars such as Nissan’s own bestselling Micra (it actually sells better than the Versa Note as well as all larger subcompact cars excepting Hyundai’s Accent), but like the subcompact car segment the city car category has seen its sales ebb in recent years, with 2014’s 21,980 total falling to 20,200 units in 2015, and 19,656 last year. No wonder Nissan, which previously had its subcompact Cube in the similar subcompact MPV category, wants to add another subcompact SUV to the mix.

Other than the name, a standard six-speed manual transmission, standard heatable front seats, and other cold weather technologies, the Canadian-spec Qashqai will be identical to its U.S. counterpart, including the inclusion of a single direct-injection gasoline-powered 16-valve, DOHC 2.0-litre four-cylinder engine making 141 horsepower and 147 lb-ft of torque that drives the front wheels in standard trim or all four via optional AWD. Along with the manual gearbox, Nissan’s Xtronic CVT (continuously variable transmission) will be standard in all trims above base S.

The Qashqai we’ll be getting later this year is already well into its second generation, which arrived elsewhere in 2013. This means it’s clothed in Nissan’s “emotional geometry” design language, most expressively used for the brand’s Murano mid-size SUV and Maxima large sedan, albeit still giving its more conservative models, like the Rogue, distinctive character. The Qashqai therefore incorporates Nissan’s signature V-motion grille design, bookended by complex LED-enhanced headlight clusters and other seemingly windswept elements, while a large rooftop spoiler and the brand’s boomerang-shaped tail lamps add a unique look from the rear.

Similarly to the way Nissan created the Juke and Cube to fulfill the needs and wants of unique consumer tastes, the Qashqai should do likewise next to the Juke, although its more mainstream design should allow much greater acceptability and therefore help to grow Nissan’s overall market share. Its larger size should assist in this regard too, the Qashqai only 307 mm (12.1 inches) shorter than the Rogue nose to tail, and only experiencing 58 mm (2.3 inches) of shrinkage between the axles. It actually rides on the Rogue’s platform architecture, so therefore Nissan customers recently put off by the popular compact SUV’s growth will find a new home in the Qashqai.

“The Qashqai will fill a void in the market,” said Joni Paiva, President Nissan Canada. “It has the functionality of a crossover with the driving abilities of a hatchback.”

European reviews of the current Qashqai report ample headroom and legroom for larger body types up front, while those measuring less than six feet should find plenty of comfort in back. Cargo capacity is 648 litres (22.9 cubic feet) behind the 60/40-spilt rear seatbacks, plus if folded flat up to 1,730 litres (61.1 cubic feet) of gear can be accommodated. Nissan will make a version of the Rogue’s innovative Divide-N-Hide cargo system available as well, which provides a total of 18 adjustable variations between the passenger and stowage compartments, including “out-of-sight storage” and a “lower deck” to manage taller cargo.

Nissan hasn’t mentioned all available standard and optional features yet, but so far has announced an available 360-degree Around View parking monitor with moving object detection, as well as Nissan Intelligent Safety Shield technologies such as dynamic/active cruise control, forward emergency braking with pedestrian detection, rear cross-traffic alert, plus we can expect leather upholstery, navigation, and other luxury amenities to be on the options list. Available trim levels above the base S model will include SV and SL.

With the Qashqai, Nissan will have six SUVs in the Canadian market, also including the Juke, Rogue, Murano, Pathfinder and Armada. Being that SUVs are experiencing record sales, the Japanese automaker is poised for strong growth if consumer demand continues in the same trajectory.
©(Copyright Canadian Auto Press)
Car Shopping Tools