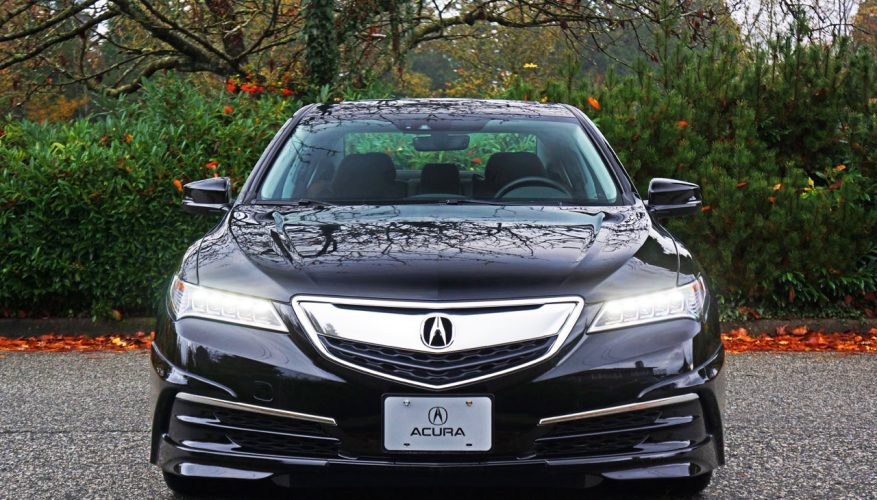 By: Trevor Hofmann
Let’s begin by agreeing that it’s highly unlikely a competitor to Germany’s big three sport sedans, which include BMW’s 3 Series, Mercedes-Benz’ C-Class and Audi’s A4, will outpace any on Canada’s sales charts for a very long time. The best and brightest from Lexus, Infiniti, Acura, Cadillac, Volvo, and Jaguar have tried over and over, and while each has made headway none has unseated even one of these popular performers so far. BMW, Mercedes and Audi own this market, just like they did when rival Saab was a serious player and will continue to once Alfa Romeo fully reenters our market. Therefore we really should award prizes for the best of the rest.

In this respect, Acura has long held position at the top of the “others” category, first with its TL and then by adding the smaller TSX, plus more recently with their single TLX offering. Comparing D-segment sport sedan sales alone (which is difficult to do as BMW includes its Gran Turismo hatchback and Touring wagon models in the same cluster of sales numbers as its dominant-selling 3 Series Sedan, Mercedes does likewise for its C-Class Coupe, Cabriolet and Sedan sales, and ditto for Audi with its A4 Sedan and Allroad wagon, not to mention Volvo with its S60 sedan and oddball S60 XC crossover sedan) shows the TLX thousands of units ahead of the Cadillac ATS, Lexus IS, Infiniti Q50, and Volvo S60 last year, with sales that were more than 10 times that of the latter Swede’s numbers throughout 2015. The same scenario played out throughout 2016, albeit with Jaguar’s new XE adding to the slower end of the pack, so this isn’t just a one-time freak incident, but a consistent result that shows Canadian sport sedan buyers prefer the TLX to non-German rivals. There are plenty of reasons for this, which even make it a smart choice when compared against the segment’s top sellers.

First and foremost, value for money. Name a German competitor that includes LED headlights as standard equipment? Let me help you out, there isn’t one. In fact, despite much improved nighttime visibility and therefore important safety advantages you’ll need to go right up into their respective top trim packages to get full LED headlamps, which in the TLX’ class reaches well into high-$50k and even $60k range. This is the third year you’ll find them standard on the $35,690 TLX.

Speaking of pricing, that window sticker number hasn’t budged an inch since last year, while it’s only grown by $700 since the then-new 2015 TLX arrived in September of 2014, despite our dollar tanking within those two and a half years. All the while the TLX has delivered both an efficiency-first focused four-cylinder front-wheel drive variant and a potent V6-powered all-wheel drive version, both incorporating state-of-the-mechanical-art eight- and nine-speed transmissions respectively, the former a dual-clutch design and the latter more conventional albeit with paddle-actuated control and auto start/stop technology.

For reasons unknown I’ve only ever driven the V6, SH-AWD-powered model since this car’s inception, the first two in top-tier Elite trim and this current one in SH-AWD Tech guise. Those previous cars included some features I wouldn’t want to live without during my long drives up country, such as adaptive cruise control with low-speed follow, which is ideal for summer stints, plus LED fog lights and headlamp washers, which are near critical during nighttime winter drives, whereas auto-dimming side mirrors are appreciated no matter the time of year. While nice additions I could do without include perimeter/approach puddle lights, ventilated front seats, automatic seatbelt pre-tensioners, front and rear parking sensors, collision mitigation braking with heads-up warning, steering wheel haptic feedback for the lane departure warning and road departure mitigation, but for just $3,600 over the SH-AWD Tech the top-line Elite comes with all of the above so there’s no need to be stingy.

Of note, Acura hasn’t done much if anything to the TLX since it arrived, other than add a trio of new colours for 2017 including Lunar Silver and Modern Steel (a medium grey) available on base trims and above, and San Marino Red, which joins other available colours on Tech and Elite trims, although my tester was finished in Crystal Black Pearl, which is one of only two hues (along with Bellanova White) available when upgraded with the $3,495 dealer-installed A-Spec package.

The ability to get the A-Spec package on any trim is a great idea, as it can even make the well-equipped base car look like a top-line model thanks to a complete aero kit including underbody extensions front, side and rear, a rear deck lid spoiler, 19-inch multi-spoke alloys on 245/40 Pirelli P Zero or Michelin Pilot Sport all-seasons, and “A-SPEC” fender badges. It looks much sportier and those larger rims and rubber provide extra stickum for increased road holding without any noticeable harshness (or at least my tester’s Michelins rode well).

I commended the TLX for its handling when it arrived and Acura has since had two-plus years to fine-tune it, with last year’s car still capable of mixing it up with the Germans on a twisting back road and this new A-Spec enhanced 2017 even more entertaining thanks to its bigger shoes, while the aerodynamic add-ons didn’t seem to interfere with interior quietness whether adding much downforce or not. The TLX trump card is once again its “Super Handling” AWD, which adds a literal twist of the outside rear wheel mid-turn for quicker more controlled high-speed cornering along with some of the feel of a rear-drive sedan. The fully independent front strut and multi-link rear suspension is nicely sorted too, incorporating amplitude reactive dampers for a taut, controlled feel, yet still absorbing road imperfections with grace and composure.

All said I’d like to see Acura eradicate the steering system’s numbness at centre, a common problem with FWD models that often carries into their AWD counterparts, while the nine-speed auto’s shift reaction could be faster too. The paddles add nicely to driver engagement and the driver selectable Integrated Dynamics System (IDS) makes quite a difference when Sport Plus mode is chosen, but most others in the class deliver sharper shifts when set to their sportiest modes.

Still, the 3.5-litre V6 sounds fabulous when revs climb and its 290 horsepower and 267 lb-ft of torque are plenty in this class, despite being weaker than its competitors’ highest output powerplants. Comparatively the Volvo S60’s turbo’d and supercharged 2.0-litre four manages 302 horsepower and 295 lb-ft of torque, the Lexus IS 350’s V6 makes 306 and 277 respectively, the BMW 340i’s inline turbo-six produces 320 and 332, the Cadillac ATS’ optional V6 delivers 335 and 285, the Audi S4’s turbo V6 churns out 354 and 369, the M-B C 43 AMG’s turbo V6 puts 362 and 384 down to pavement, while Infiniti’s Q50 Red Sport whollops all contenders with 400 horsepower and 350 lb-ft of torque, and that’s before factoring in any M, V8-powered AMG, V, and Polestar variants. Of course, take a look back at TLX sales numbers and all of this go-fast one-upmanship is moot, at least as far as the wannabe luxury brands are concerned.

The fact is these more powerful trims don’t usually sell nearly as well as their more conservative alternatives, so Acura appears to have intelligently bypassed an expensive exercise in bragging rights that it has thus far deemed unnecessary, while instead providing good fuel economy at a claimed 11.2 L/100km city, 7.5 highway and 9.6 combined with the V6 SH-AWD compared to the base FWD four-cylinder model’s 9.6 city, 6.6 highway and 8.3 combined rating. Also important, the TLX sinks such savings into the value aspect of its argument I spoke of before, while offering just enough high-quality cabin materials to keep its clients more than satisfied.

The A- and B-pillars are fabric-wrapped, as per usual in this class, while soft synthetics improve the look and feel of the dash and instrument panel, plus the door uppers front to back. Of course the door inserts are nicely finished in padded, pliable materials too, my tester’s upgraded to a gorgeous Espresso Milano leather just like the seat upholstery for a truly upscale interior ambiance, while the attractive woodgrain appears the part, but unfortunately doesn’t feel genuine at all. While noting potential improvements, Acura will want to upgrade the lower centre console’s front bin lid that not only felt cheap and plasticky, but also was a little loose and jiggly; I like its soft opening lid, however, a classy touch. Noticeably lower class, however, are the bottom halves of each door panel that are moulded from harder plastics, where all the Germans and some others in the class finish these off in pricier premium materials.

To the TLX’ advantage is a roomy cabin with more than an adequate supply of space up front and plenty in the rear, my five-foot-eight medium-build frame finding five to six inches ahead of my knees with the driver’s seatback set for my admittedly below average height, with about three to four inches remaining above my head. Additionally, there were a good three to four inches next to my outside shoulder and even more beside my hips, so therefore it shouldn’t be a problem to fit three average sized adults side-by-side in back. Then again I’d be requesting a window seat as the centre position is raised up somewhat and there’s also a small centre tunnel that’ll force you to raise your feet, so it’s probably better suited to small adults or kids. If there’s no third person for the ride you can lower a comfortable centre armrest that’s filled with dual cupholders plus a tray for small items. I appreciated the Tech package’s three-way rear seat heaters when taking notes, the rear seatbacks also very comfortable with good lower back and leg support.

An area where Acura cuts corners is in the expandability of its already reasonably large 405-litre (15.9 cubic-foot) trunk, with rear seatbacks that can only be folded in the traditional 60/40-split rather than the more flexible 40/20/40 configuration used by many rivals. The latter lets both outside rear passengers enjoy those just noted heatable cushions while skis are stowed down the middle, putting an end to potential whining or worse. On the positive the cargo compartment is nicely finished with carpets all-round and a removable load floor with storage, the spare tire replaced with a repair kit. It doesn’t have any fancy metal tie-down rings or an even fancier polished metal sill guard, but the large hinges are plastic covered. Then again a set of hydraulic supports, like those used with Infiniti’s Q50 and Lexus’ IS, would free up trunk space and come across as more premium-like when raised.

Of course some of these weaknesses are nicely overcome by the TLX’ superb value, bringing us back to Acura’s strongest selling point no matter which model you choose. While many premium buyers appear motivated by brand name, with higher prices that can often be justified by superior driving dynamics, better finishings, and of course prestige, the second rung of premium brands have to deliver most of the above along with more features and compelling pricing in order to win on the sales charts, and it’s quite clear Acura has delivered just the right combination with this TLX.
©(Copyright Canadian Auto Press)
Car Shopping Tools