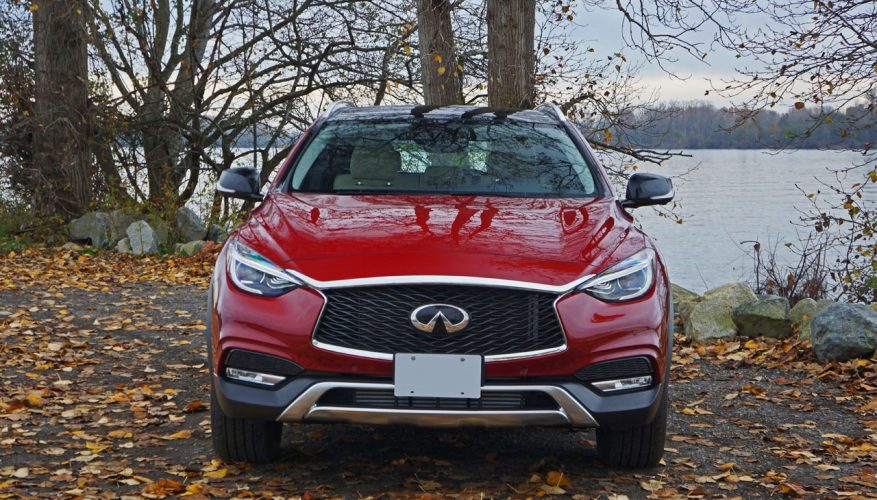 By: Trevor Hofmann
By now you may have heard that the QX30 looks for all parts an Infiniti, but is in fact mostly a Mercedes GLA 250 4Matic under the skin. For most this shouldn’t be a problem, because Mercedes makes superb vehicles and the GLA is certainly high on that list.

When first learning of this I questioned why Infiniti didn’t just use Nissan’s B platform that underpins the Juke, as it’s a great little crossover SUV with excellent handling and many other admirable qualities, but no doubt it would’ve been difficult to adapt Infiniti’s definitive design language to the little SUV’s unorthodox styling, while it’s probably a bit small for this application too. Therefore we have an Infiniti-ized Mercedes, the end result being a subcompact SUV that I truly enjoyed spending time with.

First off I like the way it looks, Infiniti pulling off the design very well. Its front end is 100 percent Infiniti as is its kinked C-pillar, while the LED enhanced headlight and taillight designs are particularly attractive. Other stylish highlights include some nice satin silver detailing for the front and rear undertrays, more satin silver brightwork around the side windows and roof rails, and a particularly good looking set of machine-finished 18-inch alloys. Certainly there are visible GLA elements, but most won’t notice the vehicle’s general shape comparison because of the way Infiniti has masterfully styled it.

True Infiniti fans will pick up on the unique key fob, however, which is pure Mercedes-Benz other than the Infiniti logo. Strangely it lets you inside the car via proximity-sensing keyless access, but you’ll still need to slot the key into the ignition, as pushbutton start/stop wasn’t included. This is even odder because Mercedes offers the GLA with a big silver button for such purposes, so it only makes sense Infiniti could have done likewise.

This small issue aside, I think the majority of Infiniti fans will feel right at home in the new QX30. They’ll need to acclimatize themselves to some of Mercedes’ unique controls, particularly the intelligent seat-shaped powered seat adjusters that are now on the upper door panels, the change in steering wheel stalks that will force them to rotate the left side knob for the headlights and do likewise on the right for the wipers, and the obviously shared climate controls, but then again this is an entry-level Infiniti so the majority of buyers will probably think this is normal for Infinitis until they move up out of the QX30 into one of the brand’s larger models.

The QX30’s cabin is more conservative in its layout than the GLA’s, which is probably smart, as it will appeal to a different buyer. For instance, the QX30 doesn’t incorporate Infiniti’s usual double-curved dash design, but rather it features nicely stitched and padded genuine Nappa leather overtop the instrument shroud and ahead of the front passenger, mine done out in an elegant cream colour to match the seat upholstery and door panels. It made for a rich looking interior, with most other materials above the class average. This in mind I think Infiniti could have gone further by wrapping the B-pillar and fabric, because Mercedes chose not to do this in their GLA. But this is a very minor negative in a cabin that’s so well executed, and won’t likely matter to most potential buyers.

More importantly to Infiniti faithful, the QX30 integrates its infotainment system within the centre stack instead of on top, tablet style, like the GLA. It’s also Infiniti’s proprietary system, which in some ways as a good thing as it means Infiniti customers will be familiar, but in other ways not so good because its graphics, resolution and depth of contrast aren’t quite as stimulating and functionality not as up to date.

The primary instruments are pulled right out of the GLA, including their stylish satin silver-rimmed dials, although Infiniti has given the multi-information display at centre its trademark purplish hue. Likewise all the switchgear throughout the cabin has a familiar, or rather unfamiliar Mercedes look and feel. It’s all excellent quality and works very well, but this will take some getting used to for Infiniti customers. A nice large fixed panoramic sunroof sits overhead, as does a console that includes switchgear for that sunroof’s power sliding sunshade and LED reading lamps, but unfortunately no sunglasses holder.

As noted some beautiful Nappa leather trim was added to key areas, while soft touch surfaces include the entire dash top and door uppers, whereas the leatherette door inserts were nicely stitched and padded to match the seats. On that note Infiniti doesn’t finish the lower dash, glove box lid, centre console, or lower door panels in soft synthetics, but instead, just like Mercedes, leaves these in a high-quality matte finished harder composite.

Those seats are very comfortable with excellent four-way lumbar support so you can apply pressure to the exact spot needed in the lower back to ease pain or prevent it altogether, while the tilt and telescopic steering wheel’s reach is extensive, allowing anybody to get comfortable while maximizing control.

There’s a surprising amount of room in back too, with about five inches of legroom ahead of my knees and plenty of space for my feet when the driver’s seat was positioned for my five-foot-eight medium-build body, plus about three to four inches above my head and the same next to my outside shoulder and hips. It’s possible to get three abreast in back, although two is a lot more comfortable, the latter allowing rear passengers to enjoy a folding centre armrest with pop-out dual cupholders. Behind that is a handy pass through for long cargo such as skis, but active lifestyle folks will be more likely to drop one or both sides of its 60/40-split rear seatback to stow their gear. That’s easy to do thanks to a nice large release on the top portion of each seat, reachable from the rear hatch, the SUV’s 544 litres (19.2 cubic feet) of cargo space opening up to a sizeable 963 litres (34.0 cubic feet) with no rear passengers aboard.

Like the GLA 250 4Matic, the QX30 is biased more toward comfort than performance (Mercedes has a blisteringly quick AMG-tuned version to lure in rally fans, but no such luck for Infiniti). To that end it’s wonderfully refined, enjoyable through town or on the highway with the ability to soak up deep dips and big bumps better than most in the class while still delivering agile and enjoyable performance through the corners. The 208 horsepower 2.0-litre direct-injected and turbocharged four-cylinder offers plenty of performance off the line thanks to a robust 258 pound-feet of torque that comes on at just 1,200 rpm, which is lower than the GLA 250 due to a little in-house Japanese tweaking, and the seven-speed dual-clutch automatic, also modified by Infiniti, shifts quickly and smoothly through the gears with or without its standard paddle shifters and always matched engine revs ideally, making the most of available power (Mercedes claims the GLA 250 4Matic can manage 6.6 seconds from zero to 100km/h, but Infiniti doesn’t offer any performance data).

This is another bonus offered in the QX30 that’s not necessarily available in larger Infiniti SUVs, giving the QX30 sportier feel then some of the Japanese brand’s bigger, more powerful, and more expensive utilities that don’t offer paddles in their lower trim levels or sometimes at all. Next to the electronic gear selector there’s a button for Sport, Manual, and Eco modes, but oddly no default or “Normal” setting, although due to Sport mode being a bit peaky and the general calm nature of the QX30 overall, I found myself leaving it in Eco mode for most city driving, where it still delivered amply strong performance along with superb comfort.

Really, I can’t emphasize the QX30’s comfort and overall livability enough. I had two other test cars during the same week, the first alternative a larger and more luxuriously equipped premium-branded hybrid SUV and the other a sexy two-seat convertible, but I kept walking right past these two in my driveway and out to the road where I’d initially parked the little Infiniti because I didn’t expect to be spending as much time in it. Its seats are so good, upright driving position and visibility so excellent, all-round ease of use so relaxing, practical layout so useful, fully-loaded feature set so well sorted, and performance so enjoyable that it became my regular go-to transport, forcing me to make special trips at the end of the week to log miles on the others.

It didn’t hurt that it was also good on fuel. This brings up another QX30 bonus not yet found in every Infiniti model, auto start/stop, which helps the little SUV achieve a superb claimed fuel economy rating of 9.7 L/100km city and 7.1 highway with FWD or 10.6 city and 8.0 highway with as-tested AWD.

This brings up an unusual aspect to the QX30’s three trim-line offering, the most performance-oriented Sport model can’t be had with AWD; this odd reality made even stranger when factoring in that, by Infiniti’s own projections, more than 80-percent of QX30 buyers will opt for AWD.

Before getting ahead of myself a rundown on features is as follows: the $35,990 base QX30 uses FWD and comes standard with 18-inch alloys on 235/50 all-season runflats, auto on/off halogen headlamps, signature LED daytime running lamps, proximity-sensing keyless access, power-folding heatable outside mirrors with puddle lamps, reverse dipping and driver-side auto-dimming, an auto-dimming interior mirror, a leather-wrapped multi-function steering wheel, cruise control, dual-zone auto HVAC, 7.0-inch touchscreen infotainment with a rotating dial controller surrounded by quick access buttons on the lower console, a reverse camera, Bluetooth phone and audio streaming, and a six-speaker AM/FM/CD stereo with satellite radio and two USB inputs, while Nappa leather upholstery, heatable eight-way powered front seats with memory for both seats and mirrors, and all the usual active and passive safety equipment also come standard.

If the opportunity arrives I’d really like to test out the $46,490 QX30 Sport as it not only includes both Premium and Technology packages, but also boasts 19-inch alloys on 235/45 summer performance runflats, a 1.5-centimetre drop in ride height, seven-percent stiffer springs, a flat-bottomed sport steering wheel, sport seats with more aggressive side bolstering, larger more capable brake rotors that are cross-drilled up front with Infiniti-branded calipers, a gloss black grille insert, unique front and rear bumpers and lower fascias, and dark chrome dual exhaust finishers, all of which should make it more fun to live with and drive.

The new QX30 is only the initial result of a five-year strategic partnership between Infiniti and Mercedes-Benz parent Daimler, with many of the Japanese brand’s vehicles already utilizing the 2.0-litre turbo engine and other Infiniti models based on Mercedes’ chassis architectures expected. If these future projects turn out as well as the QX30, the union could help Infiniti grow its market share while boosting both companies’ bottom lines.

I’m now a big fan of both subcompact SUVs, and having spent time in each could understand why someone would choose the QX30 over the GLA, or vice versa. They’re surprisingly different despite being near identical at their core, like monozygotic twins separated at birth, one having grown up in Germany and the other in Japan. Choose wisely, but make sure you drive both.
©(Copyright Canadian Auto Press)
Car Shopping Tools