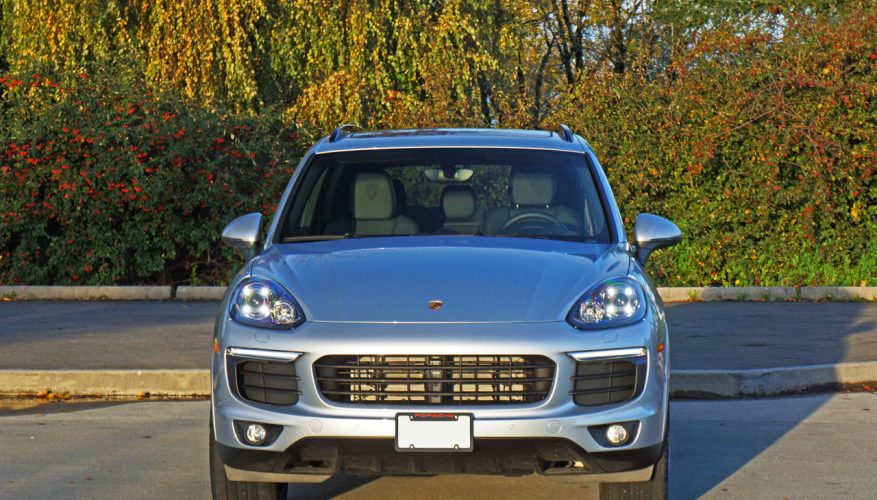 By: Trevor Hofmann
Just how much does the Cayenne matter to Porsche? To the storied Stuttgart-based premium brand it’s worth its weight in gold, or at least platinum.

So far this year Porsche has sold 1,810 two- and four-door sports cars, but Cayenne sales alone add up to 2,115 over the same 11 months. Factor the brand’s rising star, the Macan compact SUV into the mix and Porsche’s 2016 calendar year sport utility sales have already broken 4,700 units, which means its two SUVs account for almost 77 percent of the brand’s 6,100-plus year-to-date sales. In other words, without the Cayenne and new Macan, Porsche would likely cease to exist in Canada. Being that the results are similar in the U.S. and other markets around the world, let’s just be glad the powers that be at the helm of this storied brand had the smarts to enter the luxury SUV sector when they did way back in 2002.

After all, the Cayenne is not only a superb family hauler that actually lives up to the first initial in SUV, but the profit made from the popular model pays for the initial development of a whole host of sports and supercars, not to mention racing programs worldwide. On top of that, the success Porsche has enjoyed with the Cayenne has inspired other brands to make SUVs of their own, some of the newest being Jaguar’s F-Pace, Maserati’s Levant, and VW group’s own Bentley Bentayga that rides on a modified version of the Cayenne’s underpinnings. Even highfalutin Rolls-Royce will soon enter the SUV ranks.

Fortunately you don’t have to spend upwards of half a million to own an extremely capable near exotic super SUV, the Cayenne GTS and Turbo models that live up to such accolades starting at $110,100 and $131,500 respectively, and the still impressive base model available for a very approachable $68,900, while this just above base Cayenne Platinum Edition delivers spirited performance and loads of luxury for just $75,100.

Personally I would have preferred if Porsche called this well-equipped model the Iridium Edition or Rhodium Edition, as any metallurgist or commodities professional will tell you (of which many own Cayennes, of the latter at least) are the rarest of metals and therefore have the potential to be most valuable, and besides there are way too many Platinum-graded SUVs and pickup trucks on today’s market, the name almost nearing the ubiquity of Limited (rhenium, gold, and palladium are rarer than platinum too, while gold is worth a whole lot more than all of the above on today’s market). Still, Canada is the world’s fourth most prolific platinum producer, so we’ve got to appreciate a nod to our beleaguered commodities market whether intended or not.

Speaking of Canadian-sourced commodities currently in the dumps (albeit showing recent signs of life), as with all other Cayenne models the Platinum Edition runs on gasoline, the alternative powertrain no longer diesel as was initially announced. Instead, the brand’s ultra-efficient lithium battery-powered S E-Hybrid plug-in variant joins the more conventional 3.6-litre V6 for a strong combination of fuel-efficient performance, the base engine capable of 300 horsepower and 295 lb-ft of torque that when combined with its standard eight-speed automatic gearbox and all-wheel drivetrain results in an energetic 7.6-second run to 100km/h before attaining a top track speed of 230 km/h (143 mph), whereas the 416 horsepower S E-Hybrid Platinum scurries to 100km/h in a mere 5.9 seconds before topping out at 243 km/h (151 mph).

Remember I mentioned Rhodium a few minutes ago, well Porsche has paid tribute to earth’s second rarest metal by naming my tester’s $910 optional metallic silver paint in its honour, while other options fitted to my test model included the $3,870 Premium package that adds LED mirror courtesy lighting, a powered steering column, 14-way powered sport seats with perforated leather inserts featuring power-adjustable squab length and forced ventilation (that I dubbed “absolutely perfect” in my notes), memory for the seats, steering column and side mirrors, a reverse camera, reverse-dipping mirrors, and a powered glass sunroof, although Porsche had improved upon the package by upgraded that sunroof to panoramic proportions for another $760; the $880 Sport Chrono package with its analog and digital stopwatch, upgraded PCM display, Sport Plus button on the lower centre console, plus sportier throttle response, Porsche Stability Management (PSM) and Porsche Traction Management (PTM) tuning; $2,280 Porsche Active Suspension Management (PASM) that gives you electronic damping plus three selectable modes including On-Road, default and Off-Road; and more.

Of course the sky is the limit with Porsche options, so don’t believe for a second this was a fully loaded Cayenne Platinum Edition, its as-tested $85k asking price (including Porsche’s low $1,200 freight charge) still a reasonable sum for such a well-made mid-size family hauler. As you might expect from Porsche, the quality of materials suits the premium experience even when the dash, door uppers, grab handles and more aren’t covered in optional soft stitched leather, the trim bits aren’t carbon fibre, and features like four-zone climate control, 16-speaker 1,000-watt-plus Burmester audio, rear seat heating, ventilation and entertainment aren’t included, although available proximity keyless access with pushbutton start, adaptive cruise control, and some of the many other optional active safety features would’ve been nice additions.

While the front seats were beyond just comfortable, those in the rear were also better than average thanks to bucket-style outboard designs. It was roomy back there too, with my five-foot-eight frame still having about eight inches ahead of my knees, plenty of space from side to side, and another four or so above my head, unless you count the sunroof in which case I had at least six inches overhead. With two in back a comfortable armrest folded from the centre position to expose twin cupholders, or alternatively you could lower the entire centre section for loading in long items such as skis.

The cargo area is finished nicer than most in this category, with a carpeted load floor, sidewalls and seatbacks, side netting, chromed tie-down hooks, and a polished metal sill guard, while a retractable cover is housed within an extremely sturdy cross member. With the folding centre section pushed back into place, the rear seatbacks lower 60/40 to expand the already sizeable 670-litre (23.6 cubic-foot) cargo hold up to 1,705 litres (60.2 cubic feet). You’ll need to walk around to the side doors to lay them flat as no rear-mounted levers automate the process, but the exacting way the seats click into place when lowered is worth the extra effort.

I’m going to go out on a limb and say that most interested in purchasing a Cayenne with its base engine are probably focused more on its practical aspects and luxury attributes than outright performance, or they’d opt for an S or the aforementioned S E-Hybrid, GTS, Turbo, or even quicker Turbo S, but the way Porsche has set up the eight-speed auto’s gearing and massaged the suspension make for a really enjoyable SUV to drive.

Response to throttle input is strong compared to most competitive base powertrains, the eight-speed running through the gears quickly in nice, precise increments whether flicking the paddles or letting it do its own thing with either Sport or Sport Plus mode engaged, while traction at takeoff is superb no matter the state of the road below. The same goes for tackling corners where the Cayenne still reigns supreme in the mid-size SUV class, the lighter weight of the V6 resulting in quicker turn-in and a more agile feel, those big 20-inch alloys I mentioned earlier no doubt helping in this respect too. The Cayenne also tracks beautifully at highway speeds, as one would expect, while the ride is firm but far from harsh.

I especially appreciated the Cayenne’s compliant ride quality while off-roading during this model’s launch program. It’s always been an impressive 4×4, not even losing a inch of rock-crawling, mudslinging, or water fording capability (up to 550 mm or 21.8 inches deep without a snorkel for the latter) after adapting to the nearly 250-kilo (550-lb) lighter aluminum and magnesium intensive second-generation PL72 platform architecture back in 2010, which also made the Cayenne feel more car-like and therefore more capable on the road.

Alas, the diesel’s overabundant torque made for an even more capable off-roader, not to mention an ultra-thrifty one, with last year’s version, which was pulled from the market due to VW’s Dieselgate scandal, good for 12.0 L/100km city and 8.1 highway, whereas the S E-Hybrid beats it in the city with a rating of 11.3, but loses out on the highway with an estimate of just 9.8 L/100km. Both benefit from auto start/stop and other fuel-efficiency technologies, as does the base engine that still manages an impressive 12.9 L/100km claimed city rating and matches the hybrid at 9.8 on the highway. It should be noted, however, that the S E-Hybrid is the fuel economy king when regularly charged thanks to a combined electricity-plus-gasoline rating of 5.0 Le/100km. As much as I like the base 3.6, the S E-Hybrid would be my choice.

Fortunately Porsche gives Cayenne buyers more ways to personalize their rides than most rivals, from the drivetrain that powers them to the suspension that underpins all of its superb performance and luxury details. The permutations for customization are near limitless, or at least in the hundreds of thousands, from wheels, paints, and trims, to interior colours, materials, trims, and features, while even an off-the-rack Platinum Edition isn’t a family hauler you’re likely to pull up beside very often, the Cayenne still endowed with a level of exclusivity that sets it apart from most luxury-badged challengers despite its strong sales success.

If you like what you see take note the Platinum Edition is available for a limited time, and while Porsche hasn’t specified how long that might be it’s probably not a good idea to wait around to find out as its sporty combination of exterior styling enhancements and impressive interior upgrades make for an especially handsome and value packed proposition.
©(Copyright Canadian Auto Press)
Car Shopping Tools