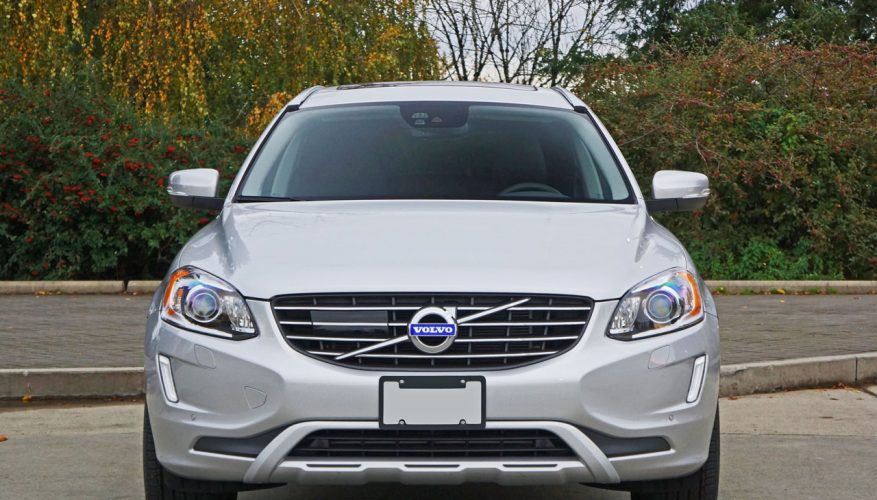 By: Trevor Hofmann
With an entirely new 2018 XC60 waiting in the wings one would expect this 2017 model to be purely carryover, how most automakers deal with final years of a given generation, but the compact luxury SUV is much too important for Volvo, so therefore changes have been made. Still, it’s more about what isn’t available this year than what is.

Gone are the old inline five- and six-cylinder powerplants, the latter an engine we saw disappear from the fabulously successful second-generation XC90 SUV and stylish new mid-size S90 when these models went on sale in late 2014 for the former and mid-2016 for the latter. Offering three completely different powertrains in any relatively low volume vehicle (the XC60 has once again been Volvo’s second-bestselling model over the first 11 months of 2016 but it only accounted for 1,430 sales compared to the competitive Audi Q5’s and Acura RDX’ 7,677 and 7,446 sales respectively) doesn’t make a lot of sense from a business perspective anyway, so slimming the line down to just a single 2.0-litre four-cylinder, which only requires one set of mounting points within the engine bay despite its various states of tune, while also easing other production complications, improves efficiency, and saves money.

Fortunately Volvo’s direct-injection 2.0-litre four-cylinder has proven to be amazingly flexible thanks to turbocharging, supercharging, and electrifying, with output ranging from 240 horsepower and 258 lb-ft of torque here in base T5 guise, to 302 horsepower and 295 lb-ft with XC60 T6 trim (designations that haven’t had anything to do with 5- or 6-cylinder power for quite some time). In XC90 T8 trim this same four-cylinder is good for 400 horsepower and 472 lb-ft of torque (the magic of plug-in electric assistance), but rather than explain how Volvo masterfully engineered this ultra-advanced power unit it’s best you check out my review of that model from a couple of months ago. After all, this engine’s most basic design is impressive enough.

Hybridization aside, Drive-E is Volvo’s new family of lightweight high-pressure die-cast aluminum DOHC, 16-valve, direct-injection, four-cylinder engines capable of six- and eight-cylinder levels of output thanks to both turbocharging and, in T6 trim, simultaneous supercharging. Few other engines in the industry combined both technologies. Instead of testing this more exciting variant my 2017 XC60 loaner came in T5 Special Edition specification, the same trim level as last year’s tester other than the replacement of the 250 horsepower turbo I-5 with the slightly less potent base engine.

From the driver’s seat the 2017 T5 AWD’s slightly lower numbers are difficult to detect, especially because full torque arrives at a very tractable 1,500 rpm. Also, instead of the old six-speed autobox, which was very good, the smaller engine comes mated to a more efficient yet still smooth-shifting, fast-reacting eight-speed automatic with manual Sport mode, adaptive shift control, and auto start/stop that, when switched to Eco+ mode, even disengages the engine when coasting at the 5 km/h mark instead of the usual complete stop. The Special Edition is standard with AWD, adding extra grip off the line that’s especially useful in slippery situations. This helped the XC60 T5 respond from standstill quickly, build up speed well and deliver strong passing power when required.

The Special Edition’s chassis setup is nicely balanced between sport and comfort, the way most people like. After all, who wants to get beat up by a rigid suspension on their way to drop the kids at school, while running errands throughout the day, or commuting. Performance SUVs capable of record-breaking Nürburgring laps and others that can overcome rocks, roots and rivers while scaling the sides of mountains might look exciting in ads, but living with them day-in and day-out can quickly become tiresome. Instead, you might even feel better after driving the XC60 for an hour than you did before climbing behind the wheel, the eight-way powered front seats with four-way powered lumbar, plus memory for the driver, so incredibly comfortable and suspension so compliant that I often found myself arriving at my destination more refreshed than I was starting out (depending on traffic). Yet despite the XC60 being easier on buttocks and backside than most competitors, it still held its own when the road started to wind and was a dream on the highway. Really, this is an SUV I could drive all day without tiring.

Standalone options include two no-cost standard exterior paint finishes and 12 $900 metallics, 20-inch alloys for $1,000, Linear Walnut wood or Piano Black lacquered wood inlays for $425, satellite radio with six-month subscription for $650, dual-stage integrated child booster seats for $650 (these are awesome if you’ve got young kids), and a $125 prep cable for a park assist camera, while bundled options include the $1,350 Climate package featuring a heated windshield and washer nozzles, a heatable steering wheel, an interior air quality system (that monitors incoming air and closes the exterior vents if it detects excess carbon monoxide, ozone, or other harmful gasses), and heatable rear outboard seats, or for the same price you can swap out the last feature for the aforementioned child booster seats; a self-described $1,100 Active Dual Xenon Headlights with Headlight Washers package; a $1,000 Blind Spot Information System (BLIS) package that adds the obvious upgraded active safety as well as front and rear parking assist; while available accessories include $180 rear door sunshades, $1,950 running boards, and a $1,080 tow bar with a hitch that let’s you make use of the XC60’s 1,588-kilo trailering rating.

Alternatively, Premier trim can be had for an extra $4,450, which adds configurable colour TFT primary gauges, an auto-dimming rearview mirror, navigation, leather upholstery in black or beige, a panoramic sunroof, rear privacy glass, and more, plus the option of $750 sport seats in black, beige, or two-tone Hazel Brown and black or Blonde grey and black. This trim allows all of the same available upgrades as the base model as well as a $2,050 Convenience package including auto-dimming power retractable side mirrors, interior accent lighting, a rearview camera, a digital compass, HomeLink universal garage door opener, power folding rear headrests, a 12-volt power outlet in the cargo area, a powered tailgate with programmable height memory, a cargo cover, grocery bag holder, and more; a $1,600 Technology package with adaptive cruise control featuring Queue Assist, and Driver Alert Control; while the standalone options list grows to include a $1,500 10-speaker, 5×130-watt digital amplifier enhanced Harman/Kardon audio upgrade with Dirac Live sound staging.

Additionally, the accessories catalog now includes a $940 front blind view camera that increases the field of vision by 45 degrees to the left and right; a $2,160 rear entertainment system with dual eight-inch monitors on the backside of the front head restraints, and all the usual inputs; a $450 protective steel grille that keeps cargo from becoming potentially deadly projectiles in the event of sudden braking or an accident; and a $325 Protection package that adds a very nice set of all-weather floor mats.

The as-tested $57,850 Special Edition is upgraded with standard AWD, plus the aforementioned HID headlamps, climate and air quality system, premium audio, leather upholstery, panoramic roof, and blind spot monitoring, while available colours are limited to six but there’s no extra charge. Additionally, unique machine-finish 19-inch alloys are included, but you don’t get the option of different inlays or sport seats, while its options list shrinks to navigation due to all of its standard features, yet available accessories remains the same.

The T6 Drive-E AWD I mentioned earlier comes in base or R-Design trim, the latter sporting some upscale exterior and interior styling improvements including unique 20-inch alloys and standard sport seats, plus more.

No matter the trim you won’t be disappointed with interior quality as the XC60 does a better job of living up to premium status than many of its contemporaries despite being one of the oldest in the compact luxury SUV class, while interior quietness and overall refinement is also excellent.

That pretty well sums up the entire SUV, the XC60 a better option than many of its peers even though it’s hardly one of the new kids on the block. If you’re looking for a comfortable and fuel-efficient yet still sporty, well-made and accommodating small SUV for a good price, this stylish Swede remains a great choice.
©(Copyright Canadian Auto Press)
Car Shopping Tools