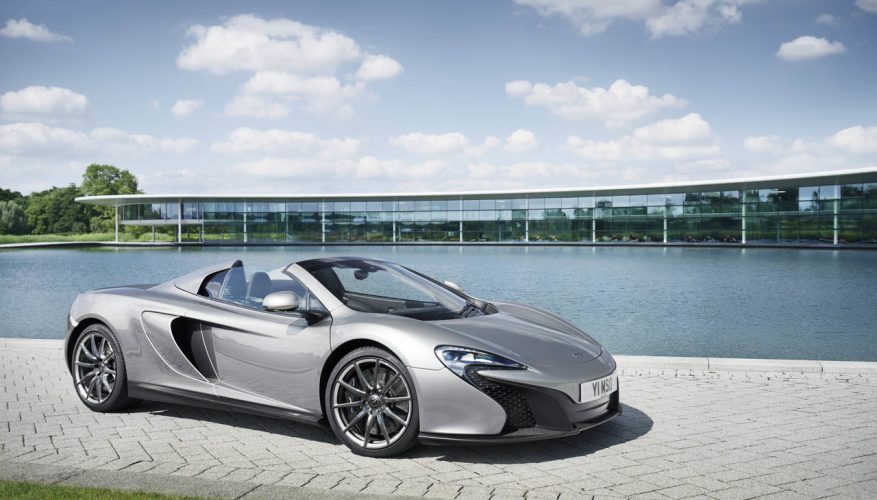 By: Trevor Hofmann
A fitting backdrop for the debut of one of the world’s sportiest motorized creations, last weekend’s Goodwood Festival of Speed held in West Sussex, England was McLaren Automotive’s choice for pulling the sheet off of its new limited edition 650S supercar.

This special 650S, which was developed by McLaren’s bespoke personalization division McLaren Special Operations and debuted alongside a special GT3 racing-spec version of the same model, gets a number of unique tweaks unavailable on the “base” 650S. For starters, exterior upgrades include satin-finish carbon-fibre components such as extended MSO side blades “giving a subtle and purposeful look” says the press release, plus a distinctive three-piece carbon-enhanced rear bumper, a more pronounced rear diffuser, and new Palladium coloured 10-spoke diamond-cut alloy rims that weigh four kilos less per wheel and are locked in place with lightweight titanium wheel bolts, while climbing inside, owners will immediately be met by a signature dedication plaque mounted to the MSO-branded carbon fibre sill panel before taking in black leather and Alcantara upholstery complemented by high-gloss accents added to the air vents and the handling and powertrain switchgear on the Active Dynamics Panel, as well as satin-finish carbon-fibre trim.

Not just limited to one body style or colour, the limited edition MSO 650S can be had in either coupe or Spider form, while three unique metallic paint finishes including Sarigan Quartz silver (with a “subtle gold infusion,” says the press release), Papaya Spark (a new take on the brand’s trademark orange livery), and Agrigan Black (with a ruby red flake, the same as shown on the concept that debuted in China earlier this year) allow even greater individualism.

If that’s not impressive enough, each MSO 650S will get a signed sketch by McLaren Automotive design director Frank Stephenson, along with an MSO-branded luxury leather holdall handmade from “stealth black carbon fibre leather,” featuring carbon black handles and stitching, plus Alcantara lining.

The new MSO 650S will begin shipping to its new owners towards the end of 2014.
©(Copyright Canadian Auto Press)
Car Shopping Tools