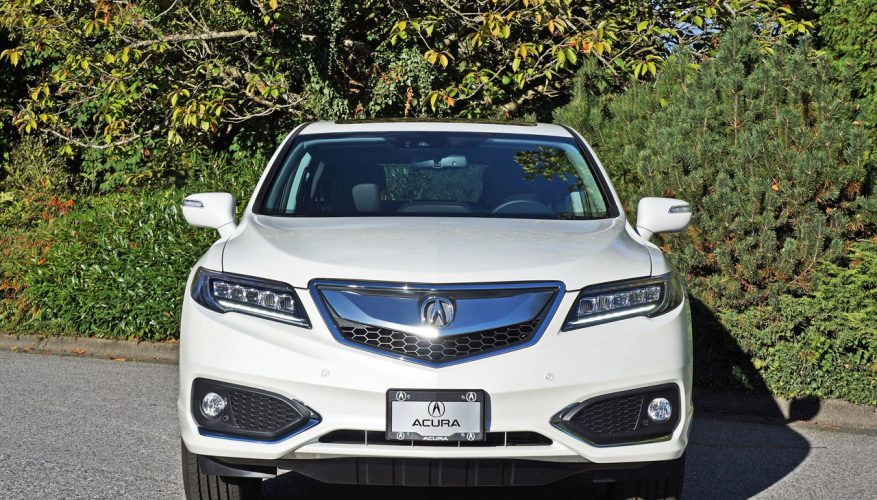 By: Trevor Hofmann
Name me a German compact SUV that comes standard with full LED headlamps? I’ll save you the time of looking, as there isn’t one. This advanced safety and styling feature is only optional with the Teutonic brands, each of which costs more than Acura’s RDX even when compared in base trim.

From the Japanese premium brand’s entry-level ILX sedan to its mid-size seven-occupant MDX utility, good value has long been an Acura trait. You can buy a 2017 RDX for as little as $42,190, which while a thousand more than last year’s base price is still a great deal for what you’re getting.

Seriously, the RDX is coming very close to knocking Audi’s Q5 off its bestselling compact luxury SUV pedestal. After 11 months of 2016 the Q5 sits in first with 7,677 sales and the RDX is nipping at its taillights with 7,446 units down the road. Granted the first-generation Q5 isn’t exactly fresh after eight model years with its mid-cycle update now five years old an all-new second-gen 2018 model expected next year, but the RDX is now in the fifth model year of its second generation, although last year’s update added those fabulous trademark Jewel-Eye LED headlamps noted earlier, plus other improvements all-round, so it’s fresher than Ingolstadt’s compact luxury SUV offering.

Now that we’re talking competitors, these two frontrunners are miles ahead of the rest when it comes to popularity. It took BMW’s X3 and the sportier coupe-like X4 to achieve 6,112 deliveries over the same 11 months, whereas Mercedes’ combined GLK and new GLC sales totaled just 4,808 units over the same period, although the GLC hasn’t been with us very long so we should give it some time to catch up. Lexus will hope its new NX can stay ahead, its 5,794 sales showing up Mercedes and the rest, those also-rans including the segment’s priciest Porsche Macan with 2,587 year-to-date units down the road, Lincoln’s MKC with 2,463 sold over the same timeframe, Infiniti’s recently lengthened QX50 finding 2,200 buyers, Land Rover’s Discovery Sport making headway with 2,182 new customers, Volvo needing a replacement for its XC60 but still attracting 1,430 clients, Jaguar heating up the segment with its new F-Pace that claimed 1,109 new owners since May, and Buick finally in this segment with a Chinese-built Envision that pulled in 893 takers. There’s a bunch of lifted wagons that qualify for this class including Audi’s A4 Allroad and Volvo’s V60 Cross Country, but that pretty well sums it up. In other words, for Acura to be near the very top of this impressive heap is something to brag about.

That said it’s not because the well-equipped base RDX is the least expensive in its segment. I mentioned its price has increased by $1,000 earlier and need to also inform that most rivals have hiked their MSRPs similarly due to our falling dollar, the 2017 Q5 even up by $1,200, 2017 X3 increased by $1,300, and 2017 MKC by more than $1,700. That still makes the Lincoln, which is in a tie with Volvo’s XC60, second most affordable behind Infiniti’s QX50. This RDX is next in line with the Lexus NX slightly pricier, Land Rover’s Discovery Sport a fraction higher yet still in the $42k range, Audi’s Q5 just above in $43k territory, BMW’s X3 jumping into the $45k arena and bypassing Mercedes’ GLC by doing so, albeit both less expensive than the new Buick Envision that’s nudging up against $46k. Still, none are even close to Jaguar’s near $51k F-Pace price or the Porsche Macan’s starting point at almost $53k.

The only thing that could’ve made my tester better (although it comes down to personal taste) is an all-black Carbon package that for $3,600 and change adds black diamond-cut alloys, black running boards with rear steps, plus black roof rails and crossbars; a hardwood trim package for the interior that nears $1,400, and a number of other accessories your dealer can install.

Life with the RDX starts out with one of the largest proximity key fobs known to man, a quality piece that’s a bit on the bulky side but makes you feel as if you’re carrying something of substance. Both front doors provide keyless access, a push of the black button on the otherwise body-colour door handle all that’s needed. No, it’s not as slick as some of its competitors’ flush fully body-colour integrated designs but these do the job without issue. Upon opening the driver’s door it’s obvious Acura’s gone to a great deal of trouble distinguishing this RDX from the previous generation Honda CR-V that shares its basic architecture, the two as dissimilar inside as they are from the outside.

Acura has provided a completely new interior with many more soft-touch synthetic surfaces including the entire dash top, much of the instrument panel, plus most of the door uppers and inserts, while the classic looking dual-dial primary instrument cluster flanks a large trip computer at centre, and two big screen infotainment displays light up the centre stack, the topmost one more of an advanced multi-information display that’s controllable with a large rotating knob and buttons on the lower section of the stack, and the lower one a touchscreen.

The RDX is missing the segment’s usual fabric-wrapped roof pillars, and there’s more hard plastics inside than with the majority of rivals, Acura forgetting to soften much of the lower dash and glove box lid, most of the centre console excepting the armrest, and more of the door panels than its competitors. Likewise it seems unusual to see a top-level model without a panoramic sunroof, the regular sized powered glass moonroof above the driver and front passenger better than nothing yet hardly as open and airy as the class average.

The seats are wonderful, mind you, their adjustability ideal for my medium-build five-foot-eight body’s size and shape and the two-way powered lumbar also a good fit for the small of my back, while their perforated inserts are useful for cooling during summer’s heat and three-way warmers amply hot when winter arrives. Cold in mind there’s no heatable steering wheel despite my tester’s top-line Elite status, plus the steering column is DIY manually adjustable, but all was forgiven when I found a set of paddles behind each spoke.

Lighting up the engine simply requires a push of the red engine start/stop button on the dash, the 24-valve, SOHC V6 purring to life in sensationally smooth near silence. It’s not the most powerful engine amongst the segment’s six-cylinder entries until you start comparing it to the competition’s base mills that are mostly turbo fours, but it’s still plenty quick off the line with a zero to 100km/h sprint of 6.0 seconds (or at least that’s what I was able to time on my stopwatch) thanks to a comparatively svelte 1,797-kilo (3,962-lb) curb weight. Likewise the six-speed automatic isn’t the most advanced in a class of seven- and eight-speed challengers yet amply responsive to throttle input and plenty positive while shifting when set to Sport mode. The engine’s i-VTEC and Variable Cylinder Management technologies also help it claim a fairly thrifty fuel economy rating of 12.4 L/100km in the city, 8.7 on the highway and 10.7 combined, which only looks thirsty when comparing competitors’ less powerful four-cylinder base engines.

Being that government emissions regulations probably won’t be relaxing anytime soon I expect a turbocharged four-cylinder will return to this model when it gets redesigned, at least in bottom-rung trims, likely with a version of the more efficient eight-speed automatic used in the ILX and TLX, although I think Acura would be making a mistake to completely kill the V6. Instead I’d like to see the larger engine updated with the nine-speed auto from the brand’s MDX, along with that model’s auto start/stop system.

Until then the standard V6 is a big bonus for performance fans, while the RDX balances ride comfort and road-holding as well as its engine manages smooth power delivery with strong acceleration, its standard amplitude reactive dampers making the most of an inherently good suspension setup made up of MacPherson struts in front and a multi-link design at the rear. Acura combines this with standard all-wheel drive that’s only deployed when required so as to minimize fuel usage. It sends up to 40 percent of the engine’s torque to the rear during moderate acceleration in dry conditions or maintains a 50/50 torque-split in slippery conditions, while the usual stability and traction control systems help to improve grip further when needed.

One of the reasons the RDX is so popular is interior roominess, the rear seats comfortable and accommodating and the cargo compartment spacious as well with 739 litres (26.1 cubic feet) behind the 60/40-split rear seatbacks and 2,178 litres (76.9 cubic feet) when they’re laid flat, which is an ultra-easy process that only requires the tug of separate sidewall-mounted levers. Carpeted flaps automatically fall into place to cover the gap that groceries might otherwise roll into, while the load floor and those sidewalls are also covered in high-grade carpeting. Acura adds chromed tie-down rings to secure heavier items, but it doesn’t spiff up the tailgate ledge with a metal protector plate like some others in the class. I suppose the only real negative in all of this is a load floor that’s not entirely flat due to a steep rise where the seatbacks meet the rear cargo area, which makes stacking boxes or other large items difficult. Obviously this isn’t an issue with buyers.

That the latest RDX is one of the more attractive SUVs in its compact luxury class despite its years doesn’t go against its appeal, its distinctive LED headlights initially catching the eye, its sleek lines enhanced by the Elite trim-line’s stunning multi-spoke wheels, and its sharply angled taillight lenses making quite the statement from the rear.

While the 2017 RDX might not quite catch up to the Q5’s sales when calendar year 2016 comes to an end, I can’t see it slipping backward in popularity here in Canada anytime soon. It’s simply too good and offers such great value that it’ll likely continue as a bestseller for years to come.
©(Copyright Canadian Auto Press)
Car Shopping Tools