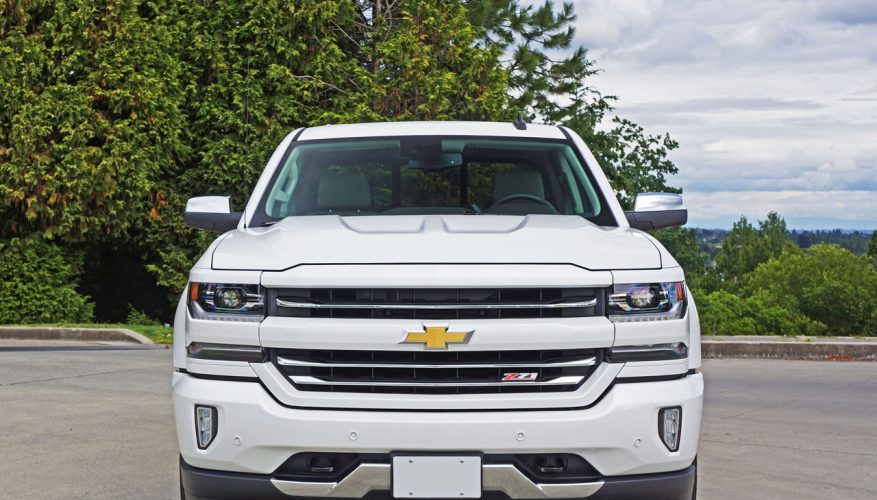 By: Trevor Hofmann
A few subtle design tweaks can make for quite a difference, evidenced by the 2016 Chevrolet Silverado in near top-line LTZ Z71 trim. A new front fascia displaying a revised horizontally split grille, a fresh set of freeform LED headlights and DRLs, vertically stacked LED fog lamps, and a reshaped bumper integrating tough yet classy looking metallic trim thoroughly modernizes the popular pickup. Really, it looks as if Chevy redesigned the entire machine. In other trims the chrome detailing doesn’t quite capture the changes like this mostly body-colour LTZ Z71.

This might be the first year that I have liked the Silverado more than GMC’s Sierra, although the Chevy truck’s fraternal twin looks pretty mean with its massive highway rig grille and equally alluring LED headlamps. Of course, GM would rather we choose between their two uniquely styled offerings than one of their competitors, which is a marketing philosophy that’s done them pretty well in recent years. With 118,837 units sold compared to 100,134, Ford remained number one in Canada last year, but combined Silverado and Sierra sales surpassed Ford’s F Series in the U.S. where it arguably matters most from a sheer numbers perspective, with 824,683 units down the road for the General and just 780,354 for the blue oval brand. So far this year it’s a tighter race with Ford back on top with 733,287 sales compared to the GM duo’s 718,994 (the numbers are 135,422 for the F Series and 90,837 for GM’s duo YTD in Canada), but a strong December for Mary Barra’s truck team could turn the tables on Mark Fields and company.

Something tells me neither CEO drives a pickup truck, at least not full-time. Walmart’s Sam Walton famously drove one daily, while pickups like this Silverado 1500 Crew Cab 4WD LTZ Z71 are amongst the bestselling luxury vehicles in today’s market. Each manufacturer makes a bevy of luxe workhorses, additional GM trims including the top-line Silverado High Country and GMC Sierra Denali, while Ford offers its F-150 King Ranch, Platinum and Limited models, Ram its 1500 Laramie Longhorn and Limited trims, Toyota doing its best to lure potential buyers into its Tundra Limited and Platinum 1794 Edition, and Nissan just trying to get noticed with its new Titan Platinum Reserve. What’s with Platinum and Limited these days? Kudos to GM for coming up with some distinctive trim designations.

I got a lot of stares and even some enthusiastic thumbs up from truck guys while at the wheel of this LTZ Z71, its optional Iridescent Pearl Tricoat white paint contrasting its aforementioned styling updates nicely. Along with the frontal redesign 2016 LTZ and High Country trims get LED turn signals and LED taillights, while all trims received a new hood. Of note, lesser trims feature redesigned projector beam headlamps with LED accents instead of the full LEDs that come with the LTZ and High Country, while a remote locking tailgate is new for these trims as well, and available optionally further down the pecking order. Lastly the Silverado can be had with new power-operated assist steps for easier bed access, whereas all trims benefit from more frame and chassis rigidity.

Mid-grade Silverados include a new 7.0-inch MyLink infotainment touchscreen, although my tester included the premium 8.0-inch system featuring faster response to inputs plus slick Apple CarPlay connectivity (Android Auto is available for 2017). It’s one of the most graphically attractive interfaces within its segment featuring bright, colourful iPad-like buttons for accessing phone, audio, HVAC, navigation, vehicle info functions, and loads of MyLink apps. Luxury models also include wireless device charging, although I’ve yet to enjoy this feature due to a rather antiquated albeit non-exploding (so far) Samsung Note 4. It’s not new but the LTZ’s primary instrument cluster is a real feast for the eyes thanks to chrome-edged dials and meters plus a large 4.2-inch colour multi-information display made accessible via slick rubberized steering wheel switchgear.

All of this kit comes in an LTZ cabin that’s one of the nicest in its full-size class. Chevy has gone so far as to completely cover the dash top with stitched leatherette, my truck finished in a nice milk chocolate Cocoa Dune brown with contrasting cream stitching. The entire instrument panel is also covered in the same high-grade synthetic, including both upper and lower glove boxes, the only area finished in harder plastic being under the driver’s knees. The same goes for the door panels that get soft padded uppers, even cushier two-tone beige inserts, nicely finished armrests, and harder more durable plastic panels below, this Silverado now matching a number of premium SUVs for refinement.

The LTZ’s seats are surfaced in both solid and perforated leather. I found the driver’s seat particularly comfortable, although as is the case with most pickup trucks there’s not a lot of side bolstering. GM’s three-way seat warmers have long been amongst my favourites as they roast backrest and squab individually, plus these seats are three-way cooled as well. Rear outboard passengers don’t get the heatable seat treatment mind you, now common with rival luxury trucks, whereas the driver one-ups everyone else with a heatable steering wheel. That steering wheel is padded, leather-wrapped and stitched with the same light brown thread as the dash, door and seat trim, while stylish dark metallic accents highlight the wheel’s spokes as well as the vents and various controls around the cabin.

Switchgear is tight fitting, well damped, and made from decent quality plastics, the various knobs’ rimmed in chrome and grippy rubber while some, particularly those for the HVAC system, get filled with crisp, colourful digital readouts that look particularly upscale and work ideally. An attractive row of chrome-trimmed toggles lines up at the base of the centre stack for quickly accessing important features, while the lower console was filled with the usual bins and cupholders, but also a set of four lidded accessory ports including twin 12-volt power outlets, a three-pronged 110-volt household style socket, and two powered USB inputs. Under the charging pad enhanced armrest is a large LED-lit compartment fitted with another 12-volt charger, two more USBs, and an aux plug, the Silverado amongst the most wired of its type. Of course it’s got wireless device connectivity covered too, with Bluetooth phone and streaming audio plus 4G LTE Wi-Fi hotspot capability.

As mentioned in the beginning, an important ingredient for success in the pickup truck market is variety. Along with unique styles and dramatically different feature sets you can buy a Silverado in most every cab and bed size and style currently available, while much the same goes for engine and drivetrain configurations. You won’t find any turbochargers or diesels amongst the bowtie brand’s half-ton models, at least not yet, but the Silverado’s lineup of direct-injection, continuously variable valve timing, and Active Fuel Management (cylinder deactivation) enhanced cast-aluminum pushrod engines include a 4.3-litre V6 with 285 horsepower and 305 lb-ft of torque, an as-tested 5.3-litre small-block V8 making 355 horsepower and 383 lb-ft of torque, and finally a 6.2-litre V8 good for 420 horsepower and 460 lb-ft of torque.

New for 2016, Chevy has expanded the availability of its eight-speed automatic from the largest 6.2-litre unit to its 5.3 when combined with LTZ and High Country trims, which is exactly how my tester came fitted. Lower trims soldier on with GM’s well-proven six-speed auto, something that will likely change in the future due to competition and ever more stringent fuel consumption regulations.

In an effort to at least make a good impression with those regulators it’s also possible to order your 5.3-litre V8 and 4WD-equipped Silverado with GM’s eAssist mild hybrid drivetrain that combines an electric motor producing 13 horsepower and 44 lb-ft of torque with a small 0.45-kWh lithium-ion battery for claimed fuel economy of 14.4 L/100km in the city and 11.2 on the highway, which is a nine-percent reduction from the conventionally powered 5.3-litre V8, eight-speed auto and 4WD model’s 15.0 city and 10.7 highway rating.

Unfortunately I didn’t have opportunity to haul a trailer behind my loaner, but I’ve done so during test programs for previous Silverados and found it competitive with rivals. I also wasn’t able to test this particular truck’s rotary dial controlled electronic Autotrac 4WD, but again I’ve always found GM trucks capable over rocks, through mud and snow, etcetera; besides, it was much too pretty to scratch up.

Instead, my LTZ Z71 was relegated to city life during its weeklong test, and other than difficulty finding curbside parking it was a dream to drive around town. The Silverado’s ride comfort is amongst the best in class, and while it’s not all that great at point and shoot driving amid thick traffic it’s grille is intimidating enough that cars move over to make way. The mid-grade V8 pulls off the line quickly and the eight-speed auto shifts almost imperceptibly, while highway cruising is as good as it gets in this class. Likewise this LTZ Z71 was a capable handler when traffic thinned and the road started to wind, providing confidence inspiring stability even when tracking fast in wet weather.

Strangely there was no proximity-sensing keyless entry or pushbutton start in this pricey luxury truck, only a rather cheaply made remote dangling from an even cheaper plastic key. Order the brand’s least expensive Spark or Sonic and at least you’ll get a fancy switchblade style key fob made from high-quality materials, but Chevy still hasn’t managed to deliver continuity amongst its models when it comes to the simplest of things, and obviously doesn’t understand how a well made key fob helps to provide an owner with a sense of quality that reflects on the entire product.

That would be my only complaint and hardly a deal killer, which goes to show how excellent this truck is in all other respects. Best in class are the corner steps integrated within each side of the rear bumper, allowing easy bed access. No competitor includes anything similar to these grippy footholds, with Ford offering an innovative yet expensive and complicated retractable two-step and handle system hidden within its tailgate, and all others forcing you to do a hamstring stretching balancing act on the corner edge of either rear bumper, potentially dangerous when wet. With one simple but effective innovation, GM has forever ended the challenge of hoisting oneself up onto the bed, even more difficult for we shorter folks who are getting on in years. If you’re questioning why you should consider any GM truck over the competition, this is reason number one.

That the new Silverado 1500 LTZ Z71 also looks so good, is finished so nicely inside, comes with so many well designed features, drives so well on and off-road, can haul serious loads, gets excellent real-world fuel economy for the class, and should continue GM’s better than average reliability, are some additional good reasons worth contemplating.
©(Copyright Canadian Auto Press)
Car Shopping Tools