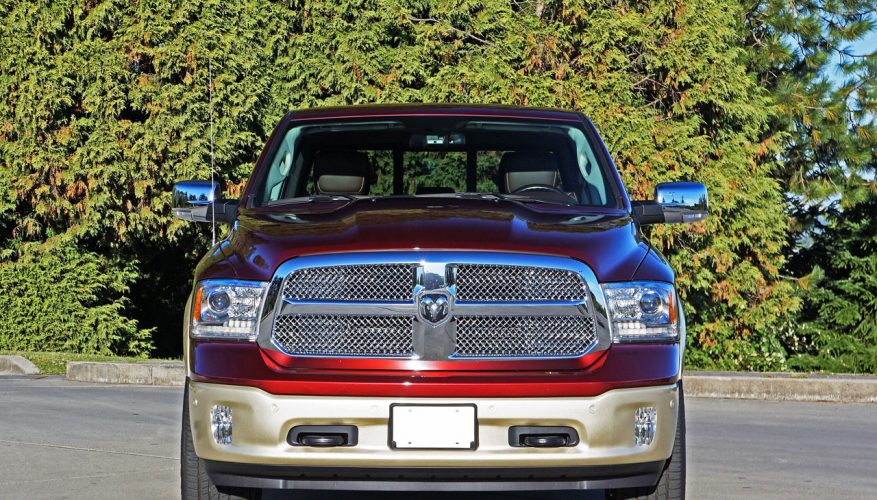 By: Trevor Hofmann
What’s stylish to one person can be gauche to another, which is why automakers create so many different trim levels. This is especially true for pickup truck lines. Earlier this year I tested a 2016 Ram 1500 EcoDiesel Crew Cab Laramie Limited 4×4 and since then I had the pleasure of driving the same truck in EcoDiesel Crew Cab Laramie Longhorn 4×4 trim.

You’d think by merely swapping Limited for Longhorn there wouldn’t be much difference in the way these two trucks look, but the former is focused much more on urbanites whereas as the latter is pure country. Think rich rancher instead of a simple ranch hand, mind you, the 2016 Ram 1500 EcoDiesel Crew Cab Laramie Longhorn 4×4 starting at a cool $58,495 plus freight and fees compared to $31,095 for the base 1500 ST. The Laramie Limited? It’s priced even higher at $62,495.

In between workhorse ST and the dolled up Laramie Longhorn are SXT, SLT, HFE, Outdoorsman, Sport, Big Horn, Laramie, and Rebel models. Like I said, there’s no shortage of unique trim levels to satisfy every level of income and style.

Personally I gravitate toward the Laramie Limited, at least from a style perspective. My fondness for western themed items has waned since my early teens, although there was a time the only place I didn’t wear my cowboy hat was in the shower. There was also a time I didn’t like avocados, spinach and sashimi. Our tastes change as we age and augment to our new surroundings, but that doesn’t mean I don’t appreciate the quality and refinement of finer things that don’t happen to fit my personal wardrobe.

The Longhorn starts off with loads of chrome on a traditional crosshair grille with unique chromed wave-mesh inserts, plus more chrome most everywhere else (the upcoming 2017 model gets the same unique “anvil” style grille as Limited trim), and a two-tone paint scheme, my loaner finished in no-cost Red Pearl up top and White Gold Metallic around each wheel cutout and along its lower extremities including the front and rear bumpers. Ram even paints the 20-inch polished alloy wheel pockets in gold, a precursor of things to come once inside.

On the steering wheel spokes and centre stack where satin silver trim might otherwise glitz up the look, that gold theme continues along with plenty of chrome, while Ram even details much of the cabin in genuine open-pore hardwood. The Laramie Longhorn’s Canyon Brown leather is adorned with traditional cowboy boot and saddle style stitching in light beige thread and laser-etched patterns (Cattle Tan with black stitching/etching is also available), whereas the top of the dash and door uppers get wrapped in less ornately stitched padded leather, but the backsides of each front seat get fancy once again with dressage saddle bag-like covers overtop map pockets featuring intricately embossed metal belt buckles that remind me of ones I wore many years ago, yet still popular where folks live closer to the land. The supple softness and thickness of the solid and perforated hides is about as nice is this class gets, and those seats are as comfortable and accommodating as they look.

I should also mention you can get the Longhorn with monotone paint and conventional satin silver painted wheel pockets for a more contemporary look, plus you don’t have to go with all the western themed stitching/etching inside either.

The gorgeous primary gauges can’t be exchanged, however, but who would want to? Two large dials bookend a large colour TFT multi-information display, while the big touchscreen on the centre stack is not only filled with a backup camera and accurate Garmin navigation, but also controls for the audio system, including satellite radio and every conceivable media function such as Bluetooth audio, loads of Uconnect apps, phone connectivity, and more.

All of the Laramie Longhorn’s switchgear is excellent, personal favourites being the space-saving rotating dial gear selector and its pushbutton part-time four-wheel drive interface, while the large buttons for the audio and HVAC system feature chromed rims and grippy rubber surrounds. All buttons, knobs and toggles fit nice and tight and are well damped too, while a useful three-pronged household-style 115-volt socket is right on the dash next to twin upper and lower glove boxes. Other conveniences include a console bin with a holder for your smartphone, a massive two-level storage bin under the leather-clad armrest integrating an SD card slot, USB and auxiliary plugs, a 12-volt charger, plus a shallow rubberized tray up top and a rubberized bin below, with a CD changer vertically installed on the side.

The seats in back are spacious with ample legroom, while a large flip-down centre armrest filled with cupholders separates rear passengers if three’s a crowd. Even better, the 60/40-split seat bottoms flip upward against the back wall, exposing a completely flat foldout load floor. Ram even fits tiny LED lamps to the bottom side of the seats so you can see what’s there at night.

My only complaint with this interior is its lack of a sunglasses holder in the overhead console, just LED lights, controls for the sunroof, and a universal garage door opener instead, but I suppose there’s ample space in the top glove box or one of the bins within the centre console.

You can’t find a more comfortable, nicer riding, better driving pickup truck on today’s market than this Ram 1500 in near top-line trim, especially when upgraded with the air suspension. It’s the only truck in its class with rear coil springs, which benefit both ride comfort and handling in a big way. They don’t seem to negate the 1500’s payload or towing capacities either, with my EcoDiesel 4×4 Crew Cab tester capable of 603 kilos (1,330 lbs) of what-have-you in the bed and 3,905 kg (8,610 lbs) of trailer weight. Other trims can tow up to 4,178 kg (9,210 lbs), so it’s a good idea to study the various drivetrains and body styles to choose exactly what suits your needs, or alternatively step up to a heavy-duty Ram 2500 or 3500.

You can get the Laramie Longhorn with a 395 horsepower 5.7-litre Hemi V8 or Chryco’s award-winning 305 horsepower 3.6-litre V6 in lower trims, but my loaner’s 3.0-litre EcoDiesel V6 has become a personal favourite as it not only puts in a day’s labour like big gasoline-powered V8s and more, it’s also quick off the line and plenty powerful for highway passing manoeuvres. The Laramie Longhorn is a dream on the freeway, while it manages corners better than most half-ton pickups, the eight-speed automatic always finding the ideal gear to make the most of the engine’s 240 horsepower and 420 lb-ft of torque. That it also achieves best-in-class fuel economy at a claimed 12.1 L/100km in the city and 8.8 on the highway as tested, or an even better 11.3 city and 8.0 highway in HFE trim, is a bonus that’s been too hard for pickup truck buyers to pass up.

Ram pickup popularity has grown tremendously over the past decade, with calendar year 2005 only finding 37,483 Canadian buyers and 2016 looking like it’ll come close to the 91,195 sold last year. Ram pickup sales regularly beat both Chevy’s Silverado and GMC’s Sierra individually and get pretty close to these GM twins when their formidable forces are combined. That level of growth can only come if you’re doing things right, and the Ram 1500 is well designed in almost every way.

The only thing it’s seriously lacking is an easy way to climb up into the cargo bed when the tailgate is open. When closed it’s easy to step on the lowered centre portion of the bumper and lift legs over the tailgate, but when it’s down the only place to rest your foot is on top of the bumper, and that’s quite a stretch for a lot of people and not a very stable perch, especially if it’s wet. GM does a better job with standard corner steps carved into each side of the rear bumper, while Ford offers a sophisticated albeit expensive pullout step system hidden within the tailgate itself. I’d like to see Ram put more effort into engineering better bed access, or at least copy what works on other trucks.

Other than that the Ram 1500 is a superb way to haul yourself, your family and your gear around town or country. Choose this dressed up Laramie Longhorn if you live in the latter or hanker to western ways, or opt for any number of other trims if you’re an urban trucker. It’s all good. Different strokes for different folks as they say, but all should be satisfied with a truck that’s a cut above most rivals.
©(Copyright Canadian Auto Press)
Car Shopping Tools