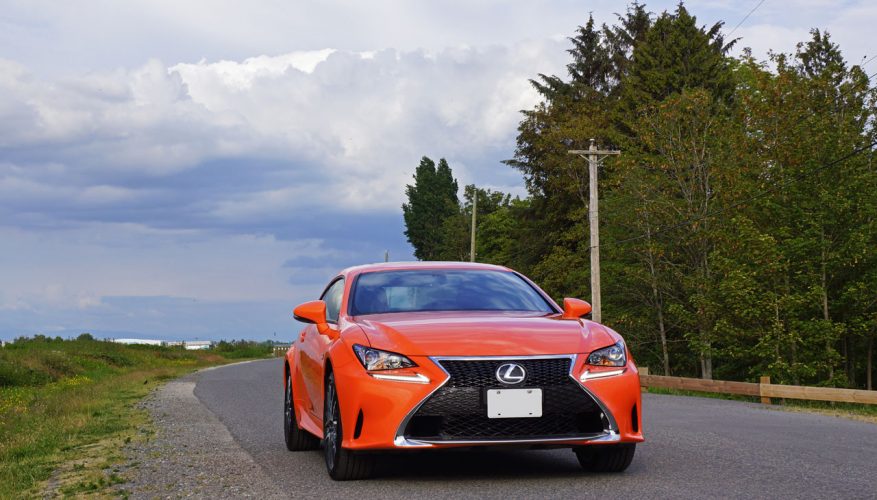 By: Trevor Hofmann
At first glance you’d be forgiven for thinking the RC 300 AWD F Sport is an RC F. Of course, the two models are based on Lexus’ new RC sport coupe, so their design and overall shape is identical, while this version is visually amped via the F Sport upgrade package’s more aggressive styling front to back, not to mention it wears the same Solar Flare orange paint as the previous RC F I tested, but driving them is night and day.

The RC F is a 467 horsepower V8-powered rear-drive super coupe competing with the likes of BMW’s M4, Cadillac’s ATS-V Coupe, Mercedes-AMG’s C63 Coupe, and I suppose Infiniti’s new Q60 Red Sport 400 as well, whereas the RC 300 AWD F Sport only looks as if it can leave 90 percent of its four-wheeled rivals in a tire-smoking whirlwind of bruised egos. In reality its 3.5-litre V6 merely makes 255 horsepower and 236 lb-ft of torque, the latter number notably less than some of its competitors’ base four-cylinder engines.

The Bavarian and Swabian challengers’ entry-level 428i xDrive and C300 4Matic sport coupes might not offer as much thrust as the entry-level RC at 241 horsepower apiece, but with 258 and 273 lb-ft of twist respectively, found from 1,450 and 1,300 rpm, they’re punchier off the line with zero to 100km/h sprints of 5.9 and 6.0 seconds apiece. In comparison our Canadian-spec base RC 300 AWD requires its naturally aspirated V6 to spin up to 4,800 rpm for peak torque, yet still manages a respectably quick 6.3-second sprint to 100km/h.

Not to leave you wondering about the others, the base Infiniti Q60 2.0t, Audi A5 2.0 TFSI, and Cadillac ATS Coupe 2.0L Turbo put out 208, 220 and 272 horsepower respectively, plus 258 lb-ft of torque for the first two imports and 295 lb-ft for the sole domestic, resulting in zero to 100km/h times of 7.3, 6.3 and 5.5 seconds each. Yes that’s a big performance spread, but keep in mind there are various engine choices with each model and sizeable pricing differences as well, so it’s possible to get similar performance in mid-grade trim from the slowest in this base-trimmed bunch, not to mention more features.

Of interest, Lexus offers an RC Turbo south of the border, this model utilizing the same 2.0-litre turbocharged four-cylinder as the brand’s NX 2.0t SUV and new ’17 IS sedan here in Canada, but like the IS it doesn’t come with AWD. Lexus’ Canadian division likely felt sales of a base rear-drive RC wouldn’t be strong enough and therefore kept the RC engine count to three, the other being the same RC 350 AWD with 307 horsepower and 277 lb-ft of torque that I tested last year. Besides, with 241 horsepower and 258 lb-ft of torque the RC 2.0t’s zero to 60 mph time of 7.3 seconds, which translates to about 7.5 seconds to 100 km/h, is a bit on the sluggish side.

You may have noticed the U.S.-spec RC Turbo’s engine output is identical to the BMW’s 428i, so why is it a second and a half slower to 100km/h? Curb weight. Most of the four-cylinder models in this class, including the RC 2.0t, utilize eight-speed automatics (with the odd six-speed manual and seven-speed autobox thrown in), so it’s not a lack of gears that holds the RC 2.0t back, but the RC is the heaviest of the lot by 140 kilos on average (albeit just 15 kg more than the Infiniti). This considerably weight, combined with a six-speed automatic in 300 AWD trim, not only makes it less enthusiastic off the line, but also the most substantive feeling through the corners.

Still, 6.3 seconds to 100km/h is plenty quick, and the big V6 sounds a lot better at full throttle than any competitive four-cylinder, an artificial mechanical soundtrack played through the audio speakers enhancing the experience. It spins up to 6,600 rpm before shifting on its own, completely ignoring my desire to let it rev higher before personally prompting its paddles, even when set to Sport Plus and manual modes, but I suppose this suits its hefty luxury coupe style.

Just the same it takes to corners with composure even when pushed hard, but even with the F Sport upgrade’s big 19s below it’s not as flickable as most peers, much of that extra weight carried over the front wheels where it feels a tad nose heavy. Fortunately braking is fairly strong and didn’t suffer much fade after repeated aggressive application, whereas ride quality never impinged on interior comfort levels. All-round the RC 300 AWD F Sport delivered a nicely balanced luxury/sport compromise that was especially quiet for the class, which would probably suit more peoples’ day-to-day lifestyles better than some of the harsher sprung alternatives if buyers in this segment would give it more of a chance.

Success in mind, so far this year the 4 Series has outsold the RC by almost 10 to one, BMW finding 4,043 buyers from January through October for a model that’s admittedly three body styles strong with a four-door coupe and convertible also available, compared to just 469 RC coupe sales. Comparatively Audi sold 1,228 A5 coupes and convertibles during a down year due to short supply ahead of an all-new redesign, whereas the new Q60 just went on sale in September so its numbers are just 283. As for Mercedes and Cadillac we’ll never know because their makers don’t separate coupe, convertible and sedan sales.

Those that take an RC for a test drive will find one of the most appealing interiors in the class, especially if you like futuristic graphics on state-of-the-art high-resolution displays. The optional primary gauge cluster is a fully configurable TFT colour display inspired by the fabulous LFA supercar, which I happen to love (the car and its gauge package). Click the pages graphic on the right steering wheel spoke and the entire centre speedometer/tachometer shifts to the right in order to open up a large multi-information display that you can then scroll through for fuel economy, info, compass, radio station presets, messages, vehicle settings, and more. Push the button again and the primary gauges slide back into place and simultaneously open up a temperature gauge on the left and fuel meter on the right. It’s a slick operator as easy to use as it’s informative.

Likewise for the infotainment system atop the centre stack that’s also one of the best of its type, much thanks to its touchpad-style controller that allows tap, pinch, swipe and finger gestures for accessing most any function you can think of. It can take a bit of getting used to as it’s sensitive, but some time spent playing around with its feature rich capability while idling will allow easy use when on the road.

Switchgear materials quality, fit, and damping is mostly excellent, and plastics quality is mostly soft touch, although I’m not sure why Lexus cheaped out on the lower dash, glove box lid and lower door panels that are all made from less than ideal hard plastics. That said the Japanese brand went over the top by covering the primary instrument shroud and sides of the lower console in the same contrast stitched padded leatherette as the floating door insert-cum-armrests, the look and feel richer than average, while no shortage of satin and textured finish metallic trim gave the cabin a high-tech yet upscale ambience.

As noted my tester was upgraded with the F Sport package, which for $5,350 adds the aforementioned 19-inch alloys on 235/40R19 rubber and full TFT instrument cluster, plus unique exterior styling including the front fascia and grille, aluminum pedals, rain-sensing wipers, a sport steering wheel, ventilated sport seats, a powered tilt and telescopic steering column, memory for the seats, side mirrors and steering column, navigation with detailed mapping, active sound control, a single DVD changer, an adaptive variable suspension, plus blindspot monitoring with rear cross-traffic alert.

The sculpted sport seats are superb, adjustable from the side of the lower cushion unless setting the three-way memory from the door panel or heated and cooled functions from the lower console, while rear seating is certainly up to 2+2 class standards. The trunk is smaller than most direct competitors at 295 litres yet should be large enough for a couple of golfers and gear, while those rear seatbacks fold 60/40 for when green turns to white and those clubs get traded in for skis. Still, the Germans offer 40/20/40 split functionality, allowing two more comfortable outboard rear passengers and skis in between.

Now that we’re talking practicalities, I averaged 11.8 L/100km during my weeklong drive, which is right where it should be considering its claimed 12.6 city, 9.2 highway and 11.1 combined rating. Still, this makes it the thirstiest amongst its four-cylinder peers, at least when it comes to five-cycle EnerGuide tests. Oftentimes I find four-cylinder turbocharged engines can use more fuel in hilly areas due to their need to rev higher than a big V6, so I wouldn’t go solely on government data.

Yes, the RC 300 AWD isn’t perfect, but it’s a credible first effort from a brand that’s never built a two-door performance hardtop in the D-segment before, and it looks fabulous. Of course, I’m very aware that styling is personal and therefore not all will share my enthusiasm, but I received a lot of thumbs up throughout my test week as well as positive comments from passersby when photographing it next to a popular riverfront pathway near my home, so I’m certainly not alone.

If you’re looking for a luxury sport coupe with a more refined approach, the RC is a good choice.
©(Copyright Canadian Auto Press)
Car Shopping Tools