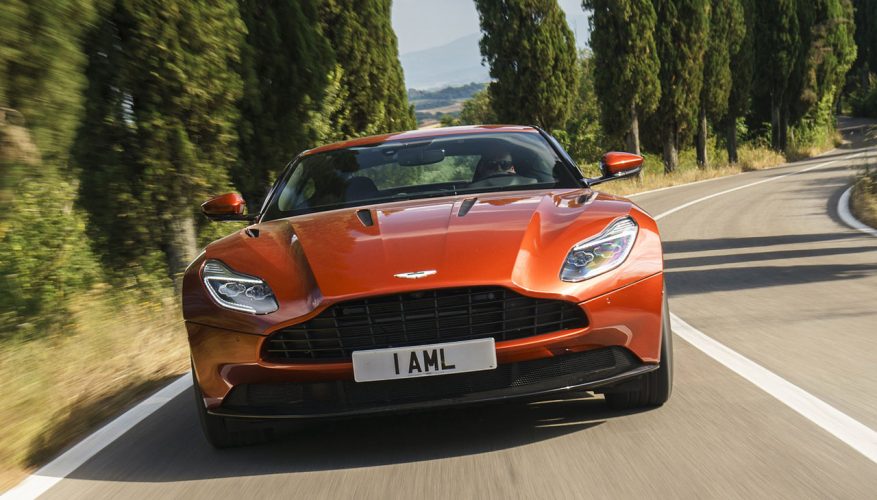 By: Trevor Hofmann
Chances are if you’re an Aston Martin fan you tend to lean more toward classic styles than the latest trends, and I’m not just talking about your rolling stock. Your clothing is probably more along the lines of Brioni, Burberry or Ralph Lauren than Poyz & Pirlz, your feet are more likely covered by Florsheim or Franco Sarto than Asos Monk or Giuseppe Zanotti, you wear a Patek or Lange on your wrist rather than a Franck Muller or Harry Winston, your glass is filled with a 25 year old Bowmore single malt or Beefeater 24 and tonic rather than a Liquid Currency, Long Strange Trip, Winnie Cooper or Zombie. I respect your choices. Really, I love Don Draper and Joan Holloway too, but let’s face the reality that the times they are a changin’.

If Aston Martin has a weakness, its various designs and the engineering behind them rely too heavily on past achievements. Others, however, will see adhering to tradition as the British brand’s greatest strength. All I can say to those in the latter camp is, you’d better hang onto your hats.

The DB11’s outward design is magnificent. It pulls frontal cues from the extremely rare DB10 Spectre star car, but is much more attractive overall. A long one-piece aluminum hood, the largest of its type in the industry says Aston, makes for a classically proportioned front engine layout, notably perforated with twin apertures for its dazzling LED headlamps and four for ventilation. It sits clamshell-like atop the front fenders, the rear portions of these separated from the hood by gaping single-ribbed brightwork engine vents that lend aerodynamically functional and aesthetic properties, whereas sidelong air gets rushed into discreetly hidden AeroBlade ducts ahead of the C-pillars before venting out below the rear deck lid. Right about now I’d like to segue into something like, the DB11’s shapely body therefore remains unmolested from wings and other add-on aero aids because its downforce is applied from within, but in reality a spoiler extends at 160 km/h to make sure its abbreviated tail remains planted at high speeds.

As sensational as the new car’s initial visual introduction is, its cabin is equally pleasing, but let me set the stage by saying I’m not 100-percent on board with all of Aston’s internal decisions. I understand each and every one has a place and purpose, but nevertheless the day I get excited about the most beautiful cluster of analog dials currently available in any car being replaced by a single 12-inch TFT LCD screen is the day I trade in my collection of mechanical wristwatches for a smart watch. The DB11’s primary configurable display is a brilliant, colourful, high-resolution, graphically stimulating modern-day triumph compared to the archaic assortment of spinning needles on silver faces that feed information to DB9 drivers, but honestly, I found just as much joy in watching the old tachometer gyrating counterclockwise with every stab at the throttle as I did hearing the fabulous V12 rudely spout mechanical expletives at uppity enviro-snob passersby.

There was no way I was about to find out how unfathomably fast 200 mph feels thanks to the cold, windy, thoroughly drenching day that provided backdrop for my drive. Rather, I felt like Nico Rosberg in the wake of Lewis Hamilton at the 2016 Brazilian Grand Prix, although fortunately I wasn’t being hunted down by a testosterone fueled Max Verstappen and could therefore pilot the $254,195 super coupe with Championship lead-preserving conservatism.

Strange to think that Aston Martin now has ties with both Mercedes-AMG and Red Bull, the former, which took a five-percent non-voting stake in the British brand as well as a spot on Aston’s board in 2013, providing some electronics, with the Austrian energy drink producer and extreme sports supporter joining forces for the upcoming AM-RB 001 hypercar.

A glance around the DB11 cabin will attest to its new three-pointed star partnership, the sizeable eight-inch fixed tablet-style infotainment display atop the centre stack and metal adorned rotating controller and character recognition, multi-touch, gesture-capable palm rest on the lower console very similar to various M-B designs, plus I must say very welcome. It’s as functionally complete and quick responding as such systems get, with superb new satellite navigation, a 360-degree camera, Bang & Olufsen audio, and more, strengthening what was previously A-M’s and the DB9’s second weakness.

The rest of the centre stack is equally improved, with a more cohesive and prettier design that still incorporates the brand’s trademark pushbutton ignition and gear selectors just below a set of HVAC vents near the top of a leather surfaced section, while upgrading the lower half with anodized toggles, touch-sensitive switchgear, crisp, clear backlit script and displays, and more.

The leather, psuede, stitching, piping, metal and trim interior detailing, of which there are near limitless bespoke possibilities, is exquisite, as expected with anything from Aston, with new finishes including layered Nexus quilting, Celestial perforation, chopped carbon-fibre, open pore woods, and brogue detailing on Bridge of Weir hides for the seats, door inserts and headliner, while overall design and execution has been stepped up considerably.

A slightly flat-bottomed steering wheel with thinner spokes, recalibrated controls, and greater telescopic reach results in a more comfortable fit for my smallish hands and short torso, longer legged body, the seat adjustability ideal, paddles well placed, and overall ergonomics spot on. The DB11 is two and a half inches longer than the DB9 between its axles, which makes it much roomier, especially for headroom and rear leg space. The back seats are even big enough for a six-footer, although he/she would have to be a masochist if extended trips were planned, plus there’s only room enough in the trunk for two golf bags, which inadvertently renders the rear passenger compartment a beautifully crafted perch for my gym bag. This said, its ability to quickly convey two golfers and their gear to the course was no fluke, Aston having made sure its largest two-door model was capable of such a feat well into its initial design. Aston Martin is getting smart in its centenarian years, don’t you think?

There would be no such outdoor activities today. Wind strained branches overhead and pools of standing water below made the comfortable, supportive and thankfully warmed driver’s seat seem like a protective hug from behind, the raging elements forcing a reminder that even something as capable as the DB11 will be driven at moderate speeds more often than not. With right foot only partially engaged the engine actually deactivates a row of cylinders to save fuel and limit emissions while paying homage to straight sixes of Aston’s past, although instead of the beloved DB6’s 4.0-litre displacement the new alignment measures just 2.6. In another nod toward just how far the brand has come since 1965 this new engine continuously swaps back and forth between right and left cylinder banks to keep the catalytic converters hot and therefore effective, but you’ll never be made aware of the intricate mechanical wizardry ahead of the firewall. Joining intelligent bank activation is auto stop-start technology that shuts the engine off when it would otherwise be idling, these features and more providing 25 percent greater efficiency than the outgoing DB9.

Likewise the mid-mounted eight-speed ZF automatic gearbox is smoother than I’ve ever experienced in an Aston Martin before, yet it swaps cogs at a ridiculously quick rate in Sport Plus mode. Default GT and Sport modes provide less aggressive application, while steering wheel paddles let you prompt shifts unless you’d rather let it do the work for you. A lightweight and ultra-rigid carbon-fibre driveshaft connects the transmission to the front-mounted engine, helping provide neutral weight distribution for the best possible handling, the latter aided via nicely weighted yet very direct Bosch electric steering.

1,770 kilos is considerable mass to move as adroitly as the DB11, but compared to some German super coupes and a similarly priced British competitor the Aston’s new aluminum body shell feels feather light. No doubt torque vectoring aids in its ability to run serpentine through sets of tightly packed S-curves at an astonishing rate, yet all the while its new aluminum-intensive chassis delivers greater comfort than I can remember any previous Aston providing. It’s easy to feel the body’s 15-percent greater rigidity in the more compliant suspension, the new car gifted with a surprising level of refinement as it improves on the DB9 in every other respect.

It’s days like this, and surrounding drivers like the many who didn’t seem to appreciate the early production work of art I was respectfully attempting to keep between the confines of my lane, which brought to light the immense braking power available. Applied normally they were as calmly adept as any premium car’s binders, but when full, immediate response was required the six- and four-piston front and rear calipers engaged with absolute command, bringing car and occupants to an immediate halt faster than seemingly possible or expected.

Hands down this is the best Aston Martin ever hand built in England, and while it’s refined in ways that cars from Gaydon, Warwickshire have never been, it retains most of the character that fans of the iconic brand have long appreciated. This is, however, where I need to petition the marque for optional analog gauges, maybe something truly fantastic created by horological master Swiss atelier Philippe Dufour, or even better, the Isle of Man’s Roger W. Smith (let’s keep them British, after all), but then again I suppose I need to accept that smart devices are here to stay and it’s yours truly that must adjust. The DB11 is certainly a good way to break with tradition and make the transition.
©(Copyright Canadian Auto Press)
Car Shopping Tools