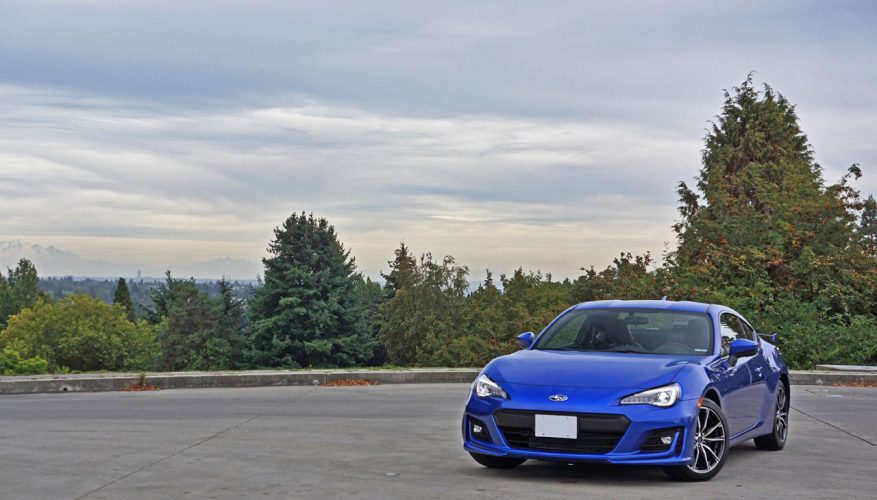 By: Trevor Hofmann
The FR-S might be getting more attention for 2017, as a revised version transforms from now the defunct Scion brand to become the Toyota 86 in our market, but Subaru’s arguably purer version of the car has been thoroughly updated too.

I like the subtle changes made front and back, the new headlights adding some sophisticated detail and the more complex lower fascia getting F1-style aerodynamics at each corner, my upgraded Sport-tech tester featuring new LED fog lamps as well. The body-colour fender vents get a more windswept look too, while the rear deck lid spoiler is now a separate pedestal-mounted body-colour and black aluminum wing for greater rear downforce and a much sportier look, plus it’s standard.

Inside, my tester’s red stitching on black leather and Alcantara psuede motif is part of my Sport-tech upgrade as well, and is just as nice now as it was the last time I tested it. In other words it’s mostly carryover, although some interior details, like an updated standard leather-wrapped steering wheel with better controls, are new.

Along with the Sport-tech’s styling upgrades it gets improved cabin materials such as a soft-touch instrument panel, the $2,000 option also including some extra silver trim, BRZ-embroidered logos on the previously noted red-stitched, leather and psuede front seats, two-way heatable elements added to the latter, illuminated vanity mirrors overhead, dual-zone auto climate control, and a 4.2-in LCD multifunction display ahead of the driver, which stands in substitute for other meters in the rightmost primary “dial”. Features integrated within include a lateral G meter, accelerator pedal position, braking force, steering angle, oil and water temperatures, battery voltage, and an integrated stopwatch for recording lap times.

I like the changes, although if after five years of production you were hoping for a wholesale redesign you’re going to be disappointed. I think instead, BRZ fans should be happy the car still exists at all. The FR-S started life out with a bang, the Scion-badged Toyota version achieving 1,470 sales in its first half year, whereas Subaru’s alternative only managed 504 deliveries over the same six months, the lower number due to Canadian allocation issues or so I’ve been told. The numbers were a more reasonable 1,825 for the FR-S and 1,119 for the BRZ in calendar year 2013, 1,559 and 922 respectively in 2014, and just 1,329 and 800 last year. As you can see, the pattern has been a steady downward trajectory, with 2016 year-to-date numbers a mere 800 for the Scion/Toyota and 612 for the BRZ after 10 months, and that’s factoring in both brands’ redesigns hitting the market this summer. In fact, sales of the Toyota 86 are almost 30 percent slower since August than they were last year, whereas BRZ deliveries have increased by 21.5 percent over the same three months.

It’s difficult to know all the parameters at play, but the renewed interest in the BRZ may have something to do with the upgraded engine, the “purer” element I mentioned earlier. As fans of this car will already know, both Toyota and Subaru models utilize the latter company’s horizontally opposed DOHC naturally aspirated 2.0-litre “boxer” four-cylinder, which has been massaged with new valves, camshaft and cylinder heads, plus a new aluminum intake manifold and exhaust manifold for an additional five horsepower and five pound feet of torque resulting in 205 of the former and 156 of the latter for models with the as-tested six-speed manual, which also feels more refined and smoother.

Subaru provides the option of a six-speed automatic with paddles, which is actually a decent alternative if you feel the need and don’t mind slightly less output, this version getting the same engine tuned to 200 horsepower and 151 lb-ft of torque, but I was certainly glad for another chance with the more engaging DIY combination.

The BRZ has never been about straight-line acceleration or speed, but the new setup certainly allows a bit more snap off the line. A new lower final drive ratio, from 4.1 to 4.3:1, paired with a standard Torsen limited-slip differential, helps in this regard, not only with power from standstill, but more thrust when you really need it, like when exiting corners.

Such is the BRZ’s forte, and fortunately the new 2017 model feels at least as agile as the outgoing version. What I love about this type of sports car, and I’ll lump the Toyota 86, Mazda MX-5, new Fiat Spider, Hyundai’s dearly departed Genesis Coupe, and even Honda’s outgoing CR-Z into this category, is the ability to have fun without venturing into unwise speeds. After all, most jurisdictions harshly penalize excessive speed, so why bother with a car that’s only enjoyable when those limits are breached and the result could result in heavy fines, impoundment, and potential loss of license. Many of us don’t have access to a local racetrack or the money to pay for its use, so I’ve become a big believer in buying the right car for the circumstances, and the BRZ falls perfectly into this real-life philosophy.

In a BRZ, traffic circles and highway entry/exit cloverleaves become surrogates for Laguna Seca’s Andretti Hairpin and Corkscrew, the car so much fun to pitch sideways into a corner that you’ll be praying for rain just so you can do so without, once again, exceeding the speed limit. It’s a car that will test your skill too, especially if you turn off the various electronic driving aids, the multi-mode stability control system better than average thanks to lateral-g and yaw-rate sensing albeit still most enjoyable when overridden, and one that rewards that skill with predictable oversteer combined with absolute control no matter the weather or road conditions.

It’s in such situations that I appreciated the grippy psuede seat inserts, which helped to hold backside in place, while overall driver’s seat comfort and support was excellent. Believe it or not I also took opportunity to climb in back, and as you probably can guess this 2+2 sports coupe’s rear quarters are for small adults and kids only. They’re certainly larger than a 911’s rear perches and a lot more accommodating than a two-seater like the aforementioned MX-5, but most owners will be more likely to use them for stowing a briefcase on the way to the office or simply leave them folded flat for easily loading life’s luggage when needed. To that end they don’t split down the middle, so it’s either rear passengers or cargo. On the positive, left folded you can stuff in four rims and slicks even if your BRZ has been upgraded with a roll bar, or a couple of golf bags if your idea of sport is focused more on greens than blacktop.

Speaking of practicalities, the driveline changes mentioned earlier hurt the 2017 BRZ slightly at the pump where the manual now gets a 11.1 L/100km city and 8.0 highway rating compared to last year’s car that was estimated to achieve 10.9 and 7.9 respectively, whereas the autobox continues to do a bit better at 9.7 city and 7.2 highway compared to 9.6 and 7.0, but I can’t fathom anyone buying a sports car like this caring one iota. After all, the added fuel cost will be nominal and the accelerative advantage of the shorter final drive is noticeable.

I’ve spoken at length about the BRZ’s performance improvements, but the suspension is also slightly more compliant for better comfort overall. This also benefits cornering on rougher roads, so it delivers yet another win-win with respect to real-life driving.

On that note I’d be happy commuting in a BRZ, that suspension, the excellent seats and its many standard features making life comfortable and convenient, some of these items including auto on/off headlamps, power-adjustable heated side mirrors, tilt and telescopic steering, variable intermittent wipers with washers, cruise control, Bluetooth connectivity with voice activation and streaming audio, aux and USB integration, eight-speaker AM/FM/CD/MP3/WMA/satellite/Aha audio from a 6.1-inch high-resolution colour touchscreen with navigation, SMS text messaging, SiriusXM Traffic, and that aforementioned standard rearview camera, while brushed aluminum doorsills, metal pedals, and its stunning 17-inch alloys on 215/45 R17 Michelin Primacy rubber deliver an even more upscale look.

While its standard feature set is impressive for a car costing just $27,995 plus freight and fees, there’s no way I’d buy a BRZ without the Sport-tech package, as it provides that extra wow factor the interior needs to match the car’s even more appealing outward design, plus a number of appreciated features.

Now I’ve got fingers and toes crossed that word gets out about the 2017 BRZ’s many improvements, as it would be a sorry day if such a great car were cancelled due to lack of interest.
©(Copyright Canadian Auto Press)
Car Shopping Tools