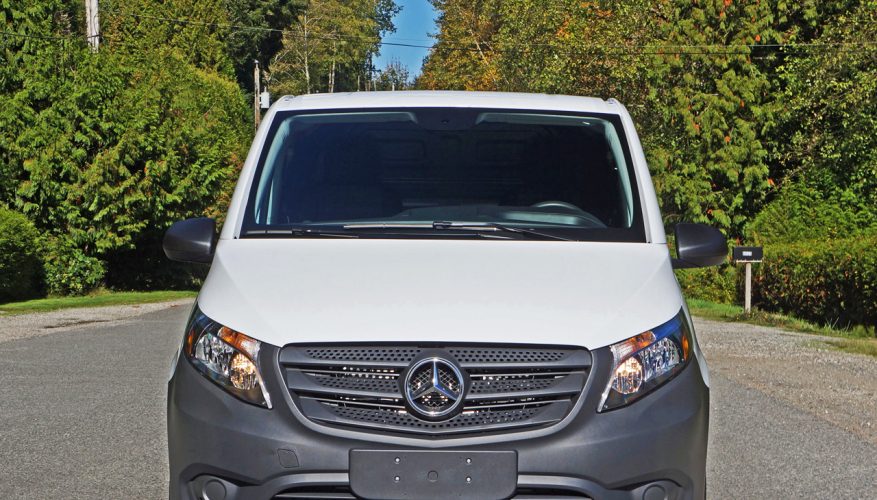 By: Trevor Hofmann
Although the Metris just arrived on North American soil last year as a 2016 model, it’s been available in Europe and other global markets since 1996 and is already in its third generation. Across the pond it’s referred to as Vito, but it’s the identical mid-size van sold here and therefore, with more than 20 years under its beltline, has a great deal more experience than Canadian commercial buyers might realize.

Step up to its comfortable driver’s seat and grab hold of its sportily shaped three-spoke steering wheel and Mercedes’ seasoned approach to the commercial van market begins to sink in, the level of refinement offered to small business owners and fleet drivers alike certainly good for morale. Really, I’ve driven most cargo vans currently available and the Metris interior goes above and beyond what’s expected, with some of the same premium detailing Mercedes is known for in its revered consumer products, such as fabric-wrapped roof pillars and satin metallic finished gauge cluster brightwork and switchgear, the quality of the latter even surpassing some premium brands’ retail cars and SUVs.

What’s more, a very well designed driver’s seat ideally supports the upper legs and back, important for the health and well being of a driver that will likely spend most of his or her day behind the wheel, while the overall driving position is excellent and visibility about as good as panel vans get thanks to low side windows and large mirrors.

Along with the impressively refined cab, which also includes steering wheel stalks that appear to have been pulled right from Mercedes’ car line, plus standard paddle shifters on the sporty steering wheel just mentioned, a monochromatic multi-information display divided the otherwise analog primary dials in my upgraded model. It gets the usual trip info plus even includes a little digitized steaming coffee cup that, after recognizing tired eyes via standard Attention Assist, recommends a break, while over on the centre stack is a full colour infotainment system featuring audio, phone and various vehicle settings, while a backup camera and navigation system can be added.

I’d recommend the former as it makes negotiating tight parking spaces and loading docks a lot easier, as do available parking sensors, while the navigation system with full mapping might save your driver time, and we all know time is money.

Accessing those loading docks won’t be a problem thanks to the Metris’ standard rear barn doors that open a full 270 degrees before magnetically clinging to the side of the van. They can be latched back up to stop at 180 degrees, or alternatively you can choose rear doors that only open to 180 degrees for a $150 savings. Then again you can opt for a minivan-style liftgate that’ll keep cargo dry when loading in the rain for just $670. A passenger-side slider comes standard, with the smoothest mechanicals I’ve ever experienced in this class, while one for the driver’s side is optional for an additional $950.

Something I noticed when first testing last year’s Metris, if you don’t fully close any one of its doors you’ll immediately get a pictograph alert on the multi-info display that actually pinpoints which door (or hood) was left open. Additionally, if you start driving away without closing that door or hood it’ll remind you with a subtle chime every time you pull away from a stop.

Something also noticeable at takeoff is the Metris’ strong performance, but if you’re used to the sound of a big six-cylinder or even throatier V8, these offered by some other van producers, the Metris’ 2.0-litre four will be a nice, quiet surprise. The turbocharged and direct-injected gasoline-powered engine makes very little commotion along with a robust 208 horsepower and 258 lb-ft of torque, the latter from just 1,250 rpm, which when combined with its particularly smooth shifting seven-speed automatic and those aforementioned steering wheel-mounted paddles results in great response off the line and good power throughout the rev range, with impressive highway passing capability too.

Another Metris attribute that might take you by surprise is the way it drives. Despite its commercial classification the ride is extremely smooth and agility through corners very accomplished due to a fully independent suspension. When first getting acclimatized you’ll find a traditional column stalk shifter which is actually electronic, with Drive requiring a pull downward, reverse a nudge upward, and Park needing the push of a button at the end of the shifter knob. The paddles work as per usual, and while you can use them to get more performance from the engine they’re also helpful for short shifting in order to improve fuel economy, the Cargo Van claimed to achieve a very competitive 10.5 L/100km combined city/highway. Of note, Mercedes offers a $300 optional auto start/stop system too, minimizing fuel consumption further while also reducing emissions.

Practicalities in mind, the Metris comes standard with the usual assortment of active and passive safety features as well as hill-start assist, tire pressure monitoring, and Crosswind Assist, that latter especially helpful when heavy gusts blow from the side at high speeds, while forward collision warning, lane-keeping assist, and blind spot monitoring are optional.

None of these features were included in my tester, but it was upgraded with an $810 Convenience Package that adds an upgraded primary instrument cluster with a pixel-matrix trip computer, a multifunction steering wheel with cruise control, a centre console with storage, and two additional master keys; plus an $860 Extended Cargo Package featuring washable full-height interior trim, sidewall lashing rails on the waist rail, a load securing rail system on the floor, and tensioning straps; a full partition between the cab and cargo area for $330 (you can also add a window for $70); heated power-adjustable side mirrors at $280; a rearview camera at $760; a $30 first aid kit; $195 worth of floor mats; and an additional set of all-weather floor mats for $288.90, pushing the price of my test vehicle from $33,900 to $37,453.90 before adding freight and fees.

Of note, Metris Cargo Van extras could have included a $1,130 Deluxe Appearance Package featuring body-colour bumpers and 17-inch alloys; a $990 Basic Window Package that includes driver- and passenger-side sliders with fixed windows, fixed rear windows with washers and wipers, all in privacy glass, plus a rearview mirror; a $650 Lighting Package that adds illuminated exits, footwell lighting, an overhead control panel, illuminated vanity mirrors for the sunvisors, and an LED ceiling lamp in the cargo compartment; a $510 Comfort Seat Package with upgraded seats featuring adjustable lumbar support; a $730 Cold Weather Package that includes heatable seats along with electrical auxiliary heating; and a $1,900 Driving Assistance Package that includes the heated power-adjustable side mirrors my van included separately, plus a leather-wrapped steering wheel with chrome trim, rain-sensing wipers, and the Collision Prevention Assist, Blind Spot Assist, and Lane Keeping Assist mentioned earlier.

Standalone options include aforementioned navigation, which is Becker’s $700 Map Pilot system, while black leatherette upholstery can be had for a mere $100, cruise control for $420, automatic climate control for $720, a warm air duct to the cargo compartment for $70, Active Parking Assist with Parktronic for $930, a reverse warning system for $130, hardboard interior paneling for the lower cargo area also costing $130, washable full-height interior trim for $360, a smoker’s package for $40, halogen fog lamps for $230, alloy wheels for $920, roof rails for $470, an anti-theft security alarm for $390, and plenty more.

From a styling standpoint, the Metris has a nice look that should represent your business image well. It gets an aerodynamically shaped nose, with a matte black grille and fascia that can be upgraded to body-colour, while many more colours are available than the usual Alpine White shown on my tester. The Metris’ rear design is purposely square, but even so it’s attractive for its class and nicely finished with large vertical taillights.

Its boxy design might lead some to think it’s bigger than it actually is, so I thought it best to give some size comparisons. Mercedes refers to the Metris as an intermediate sized van, which means that it smartly fits between compact vans such as the Ford Transit Connect, Ram ProMaster City, and Nissan NV200 (a.k.a. Chevrolet City Express), and full-size vans like Chevy’s Express, Ford’s Transit, Ram’s ProMaster, Nissan’s NV, and Mercedes’ own Sprinter. This gives it a unique market niche that has helped it earn a strong following.

Unlike the larger Sprinter, there are no long-wheelbase or extended roof Metris variants. Just the same, its mid-size dimensions give it a similar parking space requirement to a modern-day minivan plus even more manoeuvrability with a turning radius of just 11.8 metres (38.7 feet) thanks to its rear-wheel drive layout. To be specific the Metris’ 5,141-mm (202.4-inch) length and 3,200-mm (126.0-inch) wheelbase is about the same as the Dodge Grand Caravan, Honda Odyssey and Toyota Sienna, although at 1,928 mm (75.9 inches) wide it’s somewhat narrower and its 1,910-mm (75.2-inch) height is about 180 mm (7.0 inches) taller than the more car-like family van average. Still, it can sneak under the majority of garage doors, so it allows the same type of delivery access as compact cargo vans.

It’s difficult not to like the new Metris, so 2017 should be another banner year for Mercedes’ burgeoning commercial van division. On that note I should mention that a seven- to eight-seat Metris Passenger Van is also available from just $38,900, while the full-size Sprinter continues in both Cargo Van and Passenger Van variants as well as the availability of various powertrains with rear- or four-wheel drive, and as already noted, multiple sizes. However, if something smaller and more accessible is required, the extremely well made, highly fuel-efficient, and impressively accommodating Metris should be pushed to the top of your shopping list and then marked with a bold asterisk.
©(Copyright Canadian Auto Press)
Car Shopping Tools