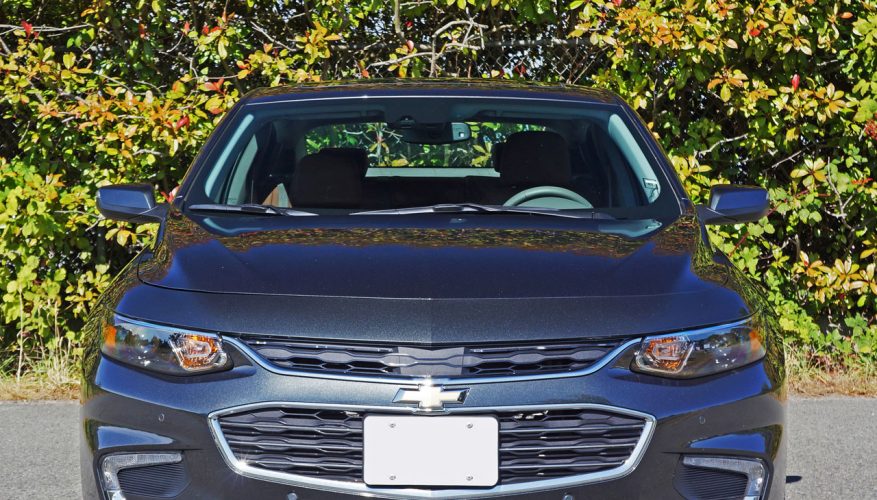 By: Trevor Hofmann
After more than a year with the latest Chevrolet Malibu in our midst and the 2017s starting to arrive, how has the latest redesign fared? If we’re merely talking numbers it’s been a major success, with the 9,953 units sold to Canadian consumers over the first 10 months of 2016 already surpassing the 2015 calendar year’s total of 9,203.

This means that it’s also moved up in popularity, surging ahead of Chrysler’s 200 and Hyundai’s Sonata which it trailed last year, although it’s important to note that buyers have punished these two models so far this year, with the “Imported from Detroit” Chryco freefalling from 10,961 units in 2015 to a mere 6,387 up until October 31, 2016 (the ghostly date reference of this near dead model seems fitting), whereas the once ultra-hot South Korean did its best impression of the tumbling Won during the 1997 Asian financial crisis by deep-diving from 13,497 deliveries last year to 8,519 year-to-date 2016 sales.

It’s not always easy to understand why one car catches the collective eye and another seems to pass by unnoticed, because all of the four-door sedans mentioned look attractive enough, offer interiors that should be amply compelling, deliver fairly strong feature sets, and offer reasonably good value, but of these three I’d choose the new Malibu in a heartbeat.

For the record, there are eight additional models in this class and each has something to offer. They range from the bestselling (by a long shot) Toyota Camry, next most popular Ford Fusion, and third-place Honda Accord, to cars that really should find more success than they do, such as the Kia Optima and last-place Mazda6. Pundits like me can play favourites, with many of my auto scribe colleagues choosing the Mazda as their winner (I rate it highly too), but in the end buyers speak with their wallets and sales tell the ultimate tale. Along with these success stories are numerous casualties, the late Dodge Avenger, Mitsubishi Galant, and Suzuki Kizashi coming immediately to mind, the latter model dying, along with the entire brand, despite a lot of love from journos like myself.

On the contrary, the Malibu hasn’t experienced many likes, thumbs up or even complimentary mentions over the past decade or so. You won’t find much negative said about the first-generation 1964–1967 models (a four-door sedan, two-door hardtop, two-door convertible, and station wagon were made), while the fastback styled 1968–1972 Malibu (sedan, hardtop, and convertible) is also highly collectable by classic car enthusiasts. I learned to drive at the wheel of my mom’s ’76 two-door hardtop, a model that ran from 1973–1977, and while it’s not revered to quite the same degree as earlier Malibus it’s still a car worth restoring (sedan, hardtop), while the still RWD albeit smaller 1978–1983 fourth-gen car (sedan, hardtop, and wagon) has a fairly strong following too.

That’s when Detroit iron lovers tend to lose interest and those who appreciate well-conceived products capable of going up against Japanese mid-sizers begin, the 1997–2005 P90-based model really showing what Chevy was capable of and enjoying decent success for a well fought fight. I was fairly new in the auto journalist game when the 2004–2008 sixth-gen Malibu arrived, and let’s just say I was somewhat underwhelmed, although the five-door Maxx showed some good old Celebrity-inspired gusto. The 2008–2012 version that followed was a more serious effort, but the 2011-2016 didn’t reach high enough within a mid-size market that was starting to compare quite well against similarly sized premium branded models when loaded up, so I must admit that I’m very pleased with what Chevy has done for 2016.

The new Malibu pulls styling cues from the larger Impala, which is a handsome sedan, although the lines aren’t quite as graceful due to a tougher, more assertive looking front fascia. Chevy’s staying true to its unique horizontally split grille that seems inspired by the bowtie’s SUV and truck lines, and for the most part it works nicely while lending the car distinctive character in a mid-size segment that’s too often mired in sameness. Take the badges off the aforementioned Sonata and even slower selling Subaru Legacy and you’ll get my point, whereas the Fusion owes way too much to Aston Martin heritage to garner respect for design originality, so kudos to Chevy for creating an original look and making it work. I find the new Malibu’s long, lean, four-door coupe-like profile particularly attractive, whereas its backside is downright stunning.

Still, as big an improvement as the exterior is the Malibu’s interior will likely impress you more. There’s an overall sense of occasion that immediately pleases, especially when done out in optional saddle brown perforated leather upholstery, or what Chevy calls Loft Brown which is available as part of its Dark Atmosphere taupe grey motif. This is a no-cost option with my tester’s top-line Premier trim, or optional with the LT. The upgrade means the seats are covered in the rich caramel colour as well as the instrument panel, each side and base of the centre stack, the lower console sides, and centre armrest, plus the door inserts and armrests front to back, the majority of these surfaces also comprised of soft, padded and stitched leatherette for a rare level of mid-size luxury.

Then again in this particular move upmarket there was a bit of a tradeoff, because the grey surfaces that would more than likely be soft synthetic with competitors, such as the dash top and door uppers, are moulded hard shell plastic, but at least they get a soft painted coating for a pricier feel. Additional niceties include an assortment of satin-silver metallic and chromed trim in key areas, plus attractive brown glossy inlays that look similar to woodgrain yet are more abstract, a smart choice as they don’t come off as fake.

Some Malibu Premier details deserve recognition, however, starting with the nicely laid out primary gauge cluster and its full-colour high-resolution multi-information display, which along with the impressively large and colourful tablet-style fixed infotainment touchscreen pull the Malibu out of the dark ages and onto the path of enlightenment. Its graphics are fabulous, especially to those who like the simple layout of an iPad, its contrast and colours rich, and functionality excellent, while text messaging capability and traffic info was helpful, plus the backup camera was bright, clear and included active guidelines for optimal parking ease and safety. The nine-speaker Bose audio system delivered great sound quality, while the quality theme continued with well-made cabin switchgear boasting tight, perfectly aligned gaps and good damping. Even better, the Malibu’s dual-zone auto HVAC interface was GM’s usual above par offering with stylish metallic-trimmed knobs filled with clear, colourful LCD digitized centres for a level of highbrow style as welcome as their easy usability.

My only complaint was a driver’s door panel that didn’t line up with the dash top, made more apparent by a front passenger’s door panel that did. Additionally the centre armrest was loose and wiggly, not the expected premium experience the Malibu’s luxuriant appearance foretold. Alas it’s not perfect, but neither is any car in this class so I can look past some of these untoward details that can likely be adjusted at the dealer level anyway.

The absolute jewel in this top-line Malibu’s crown is the 2.0-litre turbocharged engine, which is as smooth and refined is this type of motor gets. Really, go ahead and compare it to BMW’s 2.0-litre turbo or the same from Mercedes-Benz, neither of which delivers 250 horsepower in their respective 328i and C300. That Chevy now includes a particularly smooth- and quick-shifting premium-level eight-speed auto to make the most of the engine’s 260 lb-ft of torque is an unexpected bonus, the front-wheel drive car only needing AWD to ice the proverbial cake.

Of course, the Malibu doesn’t need to measure up to such lofty standards, but this impressive powertrain gives good reason to ask why we should pay more for an expensive brand. That in mind its top-line engine and transmission combo is partially pulled from Cadillac’s ATS lineup, a car that zigs and zags as well as the two Germans; and there, my friends, is where these premium players sharply veer away from anything in the Malibu’s mid-size mainstream family sedan class.

Still, I was kept happily entertained when at the wheel of this Malibu Premier, its body feeling rigid and fully independent suspension nicely balanced over the types of harsh bumps and dips a circuitous two-lane backcountry road can dish out when pushing hard. There were no steering wheel paddles to flick through when wanting to downshift, but Chevy includes a toggle switch atop the shift lever that does the job when called upon. Most of the time I simply left it in Drive to deliver brilliantly smooth linear throttle response, the Malibu amply capable through the corners and an absolutely wonderful highway car that was hardly affected by wind or tire noise.

Driver’s seat comfort is also worth noting, its multiple power adjustments including a two-way lumbar support that came very close to meeting the exact spot on my back for ultimate comfort, unlike the Camry, for instance, that doesn’t come anywhere near. The rear seating area is large and accommodating with good visibility out the front and side windows, which is expected in this class but not always delivered (bye-bye Chryco 200), and the outboard positions were very comfortable with excellent lower back support. For reasons unknown Chevy forgot to include rear seat warmers in this top-line model, these available with most rivals, but dual charge-only USB ports smartly placed on the backside of the front console mean your younger rear passengers won’t likely notice once their mind-numbing peripherals are plugged in and digital gaming ensues.

You’ll likely appreciate the Malibu’s sizeable trunk that can swallow up to 447 litres (15.8 cubic feet) of gear, while the previously noted 60/40 split rear seatbacks can expand its usefulness when required.

Practicalities in mind, this top-line Malibu is very thrifty on fuel with a claimed rating of 10.6 L/100km in the city and 7.1 on the highway, while the base 150 horsepower 1.5-litre variant is even better at 8.7 city and 6.3 highway. If you’re looking to save fuel and reduce your carbon footprint even more, take note the Malibu Hybrid is good for 5.0 city and 5.1 highway.

Chevy gives you lots of ways to enjoy the new Malibu experience, its base model starting at just $21,745 plus fees, and I stress the word “enjoy” when I say this. If the bowtie brand’s previous misdeeds have caused you to look elsewhere, I recommend you take a new unbiased look at the latest Malibu, as Chevy has hit the restart button and a thoroughly fresh and exciting new mid-size option is available. Whether or not it’s best in class is debatable, but the very fact its one of the best says everything about the new Malibu.
©(Copyright Canadian Auto Press)
Car Shopping Tools