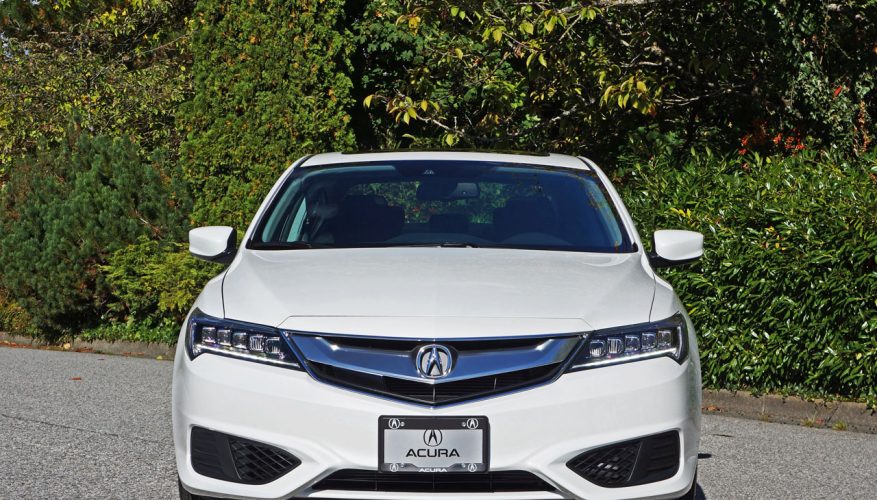 Before justifying my personal bias, the ILX’ true compact luxury competitors include Audi’s A3 sedan, Buick’s Verano, and Mercedes’ CLA sedan, the latter of which is more of a four-door coupe albeit still reasonably accommodating in back. Of course, there are others vying for your entry-level premium dollar, including Mercedes’ B-Class and Lexus’ CT five-doors, plus BMW’s two-door 2 Series, although this coupe and convertible duo doesn’t really target the same type of buyer so they’re only worth mentioning in case you’d prefer something sportier.

From a market acceptability standpoint it’s highly evident Canadian consumers prefer four doors, the CLA leading the charge with 3,352 year-to-date CLA sales as of September 2016, and Acura nipping at its heals with 3,125 ILX deliveries. Audi places a respectable third with 3,059 A3/S3 models down the road, but it takes four body styles to measure up, one of which is a hybrid, whereas the Mercedes B-Class increases Mercedes’ tally with 1,959 deliveries of its practical wagon/crossover-like hatchback, which means it’s managed to find 5,311 luxury B-segment buyers between its two-model offering. This is significant until we factor in Buick, which is arguably the segment leader thanks to 5,789 Verano sales, although some might not consider the General Motors’ brand to be a true premium player, plus it’s getting cancelled after 2017 anyway, albeit others might not consider the Lexus CT to be part of the game at all due to a meager 398 sales so far this year.

It’s clear that Acura has played its compact cards right, the ILX slightly longer than its most obvious A3 sedan competitor, albeit almost identical when it comes to width, height and wheelbase. The ILX has a clear advantage in curb weight, with the base model weighing 53 kilos less, something to consider when comparing straight-line performance as it’s not just about the entry-level Audi 2.0 TFSI Komfort’s 41 lb-ft of additional torque. The ILX’ sole engine, a direct-injection 16-valve, DOHC 2.4-litre four-cylinder, makes a spirited 201 horsepower and 180 lb-ft of torque, that horsepower figure 17 ponies stronger than the base front-wheel drive A3, and then we need to factor in the ILX’ standard eight-speed automatic that gives it an additional forward gear to play with, which aids performance and efficiency.

The Acura eight-speed, first introduced in the larger TLX, is a dual-clutch automated gearbox just like Audi’s seven-speed S Tronic, so it gives up nothing in the way of performance and even more so comes standard with steering wheel paddles, but unlike the A3 it also incorporates a torque converter for much smoother shifts resulting in a more refined driving experience. This transmission, incidentally, is the key reason I’d take an ILX over a similarly equipped Civic.

I could go on comparing the two throughout this review, the ILX coming standard with Acura’s trademark “Jewel Eye” LED headlamps, remote start, proximity-sensing keyless access, a colour TFT multi-information display, adaptive cruise control, a multi-angle rearview camera with guidelines, and a slew of AcuraWatch active safety features such as Collision Mitigation Braking, Forward Collision Warning, Lane Departure Warning, Lane Keeping Assist, and Road Departure Mitigation, such features only available in higher, much pricier A3 trims. If the U.S.-based IIHS actually tested our base Canadian-spec ILX it would earn Top Safety Pick Plus status, but being that the U.S.-specification doesn’t include AcuraWatch features in base “Standard” trim it doesn’t get the kudos, but we need to give Acura Canada credit for putting safety first. On that note the A3 requires a much larger investment before it gets the IIHS’ Top Safety Pick Plus stamp of approval.

To be completely fair the A3 gets a few standard items that will cause you to pay more in an ILX, such as powered heatable front seats, leather upholstery, and satellite radio, all of which can be had in loftier ILX trims, but here’s the crux: this well equipped ILX starts at only $29,590 plus freight and dealer fees, whereas the A3 needs another $3,210 before you start adding options.

On that note you can up the Audi’s engine performance while adding all-wheel drive, albeit at a starting price of $37,600, whereas my mid-range ILX Premium tester hit the road running at $32,090, still less than the base A3 yet including the leather upholstery and powered heatable front seats missing from the base model, with two-way driver-side memory no less, the driver’s side getting eight-way adjustment and the passenger four-way, while additional upgrades include an auto-dimming rearview mirror, a larger 8.0-inch backlit colour VGA top display controlled by a rotating knob and various buttons on the centre stack, a second 7.0-inch multi-use colour touchscreen display below that, a higher-grade seven-speaker and subwoofer enhanced audio system with satellite radio, and blind spot monitoring with rear cross-traffic alert.

I should also mention the ILX comes standard with a lot of the same types of features you’ll find from most cars in this class, such as auto on/off control for those LED headlamps, 17-inch alloy wheels, heated power-adjustable side mirrors, ambient interior lighting, pushbutton ignition, a leather-wrapped multifunction steering wheel, a leather-wrapped shift knob, filtered dual-zone automatic climate control, AM/FM/CD/MP3/WMA audio with Bluetooth streaming and hands-free connectivity, Siri Eyes Free, a powered moonroof, and more, while tire pressure monitoring, hill start assist, and all the usual active and passive safety features help the ILX achieve a five-star crash test rating from the NHTSA.

Of course, as with any ILX competitor you can add many more features including rain-sensing wipers, navigation, voice recognition, 10-speaker ELS surround-sound audio with Dolby Pro Logic, upgraded AcuraLink connectivity, and a HomeLink garage door remote with the Technology package, or all of the above plus 18-inch alloys, fog lamps, an aero body kit including side skirts and a rear spoiler, metal sport pedals, Lux-Suede upholstery, and a black headliner with the A-Spec package, but I must admit the ILX Premium tested came with everything I needed and more.

It all comes inside a car that easily meets this premium segment’s expectations. The dash top and most of the instrument panel gets finished in a very high quality soft synthetic that continues across the tops of both front doors and into the back, while the padded leatherette door inserts are even plusher and feature a stylish French-stitched seam down the middle. The thick, padded sport steering wheel feels good in the fingers, as does the shift knob and leather-wrapped parking brake handle, this latter item particularly well made. Acura doesn’t go so far as to finish off the lower half of the instrument panel, glove box lid, sides of the centre stack and lower console, or the lower door panels in premium plastics, but the matte finished harder stuff doesn’t glare and appears plenty durable. Such is also normal for this class, including the A3, but Acura pulled a premium faux pas by not wrapping any of the roof pillars in fabric, while it’s also inexcusable that the rear windows don’t power up and down automatically.

Likewise there are still carryover items from the Civic this model is based upon, including the rocker switches for the two-way heatable seats, the push or pull fuel door and trunk release lever at the base of the driver’s seat, etcetera. It hasn’t hurt ILX sales so far, or at least it’s difficult to quantify any negative impact, but it’s not great for the luxury brand’s image.

Fortunately the ILX drives really well, the aforementioned i-VTEC-enhanced four-cylinder is sourced from the Civic Si and therefore wonderfully free revving, albeit tuned specifically for the new autobox so there’s even more torque on hand. The transmission is a fabulous bit of advanced kit, its shifts very quick yet as smooth as any performance-oriented conventional automatic, while ILX’ front strut and rear multi-link suspension is very well sorted. It delivers good compliant comfort around town and on the highway, yet open the car up on a fast-paced two-laner and it responds with sharp, precise agility and near unflappable composure over mid-corner dips and bumps, standard amplitude reactive dampers helping in this respect. Braking is strong as well, the ILX’ amply powerful four-wheel discs capable of confident controlled stops no matter the speed attained or how fully they’re engaged.

The ILX is certainly a car I could live with day in and day out, its interior more accommodating than the majority of cars in this class. I had plenty of room up front, which is usually the case as I’m just five-foot-eight and medium in build, but rear seating space isn’t always optimal amongst the ILX’ peers. Still, the little Acura managed four inches ahead of my knees when the driver’s seat was set to my height, plus around three inches above my head and another four to five between my shoulder and the window. A flip-down armrest is included at centre, which capped off a really comfortable rear compartment.

Of note, the trunk is a bit smaller than the A3 and some others in the class, especially the hatchbacks and wagons, measuring just 348 litres (12.3 cubic feet), plus its folding rear seatback is just that, a seatback and not seatbacks, meaning it doesn’t offer a 60/40 or 40/20/40 split to facilitate a rear passenger and longer cargo, such as skis. It’s not finished to quite the same standard as some of its peers either, with no metal tie-down hooks or protector plate, the sill protector finished in durable plastic instead.

I know I’m getting picky, because most of these issues can easily be overlooked by ILX owners that get a lot more car for their money, as detailed above. Even its claimed fuel economy is better than average at 9.3 L/100km city, 6.6 highway and 8.1 combined, while Acura enjoys an above average dependability rating from J.D. Power, the ILX actually tied for third in the 2016 VDS Compact Premium Car category with the A4, which it doesn’t compete with, both of which are beaten by the two-door BMW 1 Series in second (now the 2 Series, although this study rates the reliability of three-year old models), while the first-place Lexus ES doesn’t compete with the ILX one iota as it’s not compact in the slightest (think about it: the ES is based on the near full-size Toyota Avalon). This makes the ILX best amongst actual compact four-door sedans, or so (kind of) says J.D. Power.

Yes, the ILX has a lot going for it, which is why so many compact luxury buyers choose it. To once again be fair to the A3, I drove a 2017 model recently and was once again impressed, so it’s an excellent choice too. It’s just more expensive, especially when filled up with features. Even if you opt for a full load 2017 ILX A-Spec it will only cost you $34,990 plus freight and fees, whereas a front-drive lower powered A3 with similar options to the top-line ILX will set you back $41,550, and you still won’t get full LED headlamps.