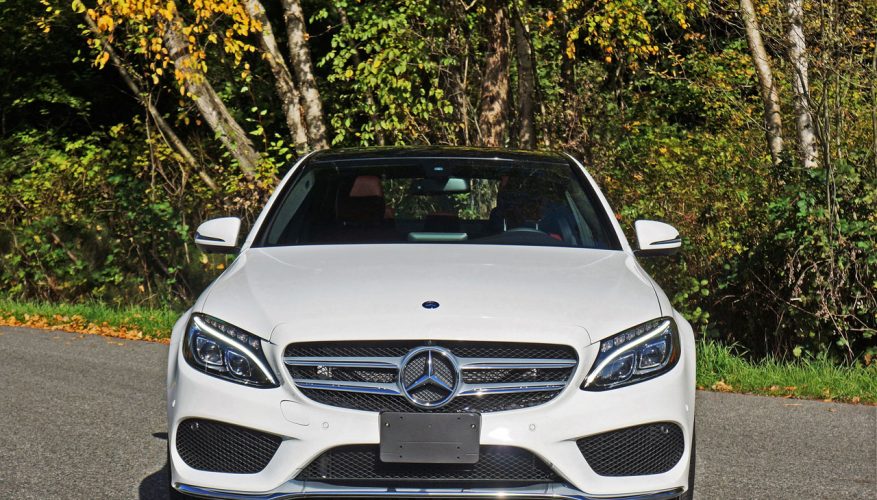 By: Trevor Hofmann
The compact premium D-segment is filled with sport/luxury hopefuls, but to most buying into this class there are only two considerations. Mercedes-Benz sells more C-Class models than any rival, but that’s where things get a bit murky. Arch-rival BMW splits its D-segment sales into 3 and 4 Series entries, which means its overall sales are higher.

Here in Canada, 2016 calendar year-to-date numbers as of September are 8,996 for BMW and 7,208 for Mercedes, with Audi trailing respectably with 5,623 A4 and A5 deliveries, Lexus managing 4,347 sales of its IS, RC and ES (the latter sized more like an E-segment E-Class and 5 Series fighter yet priced much lower), Acura with 3,125 TLX customers, Infiniti with 2,274 combined Q50 and Q60 buyers, Cadillac with 1,871 ATS Sedan and Coupe sales, Volvo with 1,023 S60 and V60 deliveries, Lincoln with 816 sales of its larger mid-size Lexus ES-fighting MKZ, Buick with 693 new Regal owners, and Jaguar finding 196 buyers for its entirely new XE.

Yes, these other brands and models exist, most of which are only given a cursory glance by 3 Series and C-Class faithful. Like opting for yet another Rolex Submariner instead of flirting with an Omega Seamaster 300 Titanium, or something more radical like the Corum Admiral’s Cup Seafender 48 Deep Dive or Clerc Hydroscaph TI, the two bestselling luxury car lines deliver exactly what their owners want while holding their value well, making them sound business choices. Just like a pampered Rolex, you’ll never have a problem reselling a nicely kept, low mileage C-Class sedan.

The C-Class at my disposal was a new 2016 C300 4Matic Sedan, the bread and butter model that outsells every other iteration. While simple Polar White in colour it was personalized with active LED headlamps, a Sport package that added some nice aero bits and upgraded the stock 17-inch rims to five-spoke 18-inch AMG alloys, an AMG interior package, Cranberry Red AMG leather, open-pore Dark Ash hardwood trim, and more, resulting in a very special looking Mercedes sedan, the equivalent of a silver-faced Submariner with a ruby red bezel (or anything but black).

The C300, which was thoroughly redesigned just last year, is a handsome four-door with no shortage of sporty visual elements, especially as tested, yet its upright body style and chunky tail end imbue a certain rigid solidity. This quality image becomes reality upon opening the door and sliding behind the wheel, with more soft touch surfaces than any rival. Premium pliable synthetics cover the instrument panel including the glove box lid, both sides of the centre stack and lower console, plus all door panels from top to bottom; even the backsides of the seats are made from a soft high-grade composite, something rarely seen in this class. No competitor goes so far to coddle its occupants, but of course it doesn’t end there. The upper edge of my loaner’s instrument panel and the entire dash top was covered in contrast stitched leather, while along with the open-pore hardwood noted earlier were real aluminum inlays in brushed and satin finishes depending on the trim piece.

Following this theme, many of the buttons, knobs and toggles were aluminized, some even knurled to perfection like the bezel of a finely made watch, but not a Submariner, more like a Breitling for Bentley GMT Light Body B04, which wouldn’t be my personal choice for timekeeping, but it’s plenty rich looking. Come to think of it, the last time I saw automotive metalwork like this was during a recent drive in a Bentley Continental GT, pretty spiffy company Mercedes. Then again Stuttgart might take offence to such a comparison, its beautiful new S-Class Coupe arguably up to par with the aforementioned Brit.

My tester came fitted with a sensational sounding Burmester surround audio system upgrade with innovative FrontBass technology, its dual door speakers capped off with beautiful aluminum grilles, these nicely matching the circular metal HVAC vents that dot the dash, while all of the door’s switchgear, including Mercedes’ trademark power seat controls, was aluminized for a particularly highbrow premium experience. As noted the door inserts and seats were upholstered in a beautiful dark red leather, this being a favourite retrospective reference of ’50s and ’60s era Mercedes models. It plucks memories of my dad and I pulling up to my Onkel Gleissner’s house in North Vancouver and eyeing his cream on red 1959 300SL roadster. I hardly remember my uncle today as I only met him a few times, but I’ll never forget his car. I wouldn’t dare compare the classic 300SL to this C300, even Mercedes PR reps would be offended, but the red leather is homage paid to an earlier era that still has the power to wow today.

The C300’s 16-way driver and 14-way front passenger seats are ideally formed to hamstrings and torso, while roominess is not an issue front or back. The rear seats are almost as comfortable as those up front, and plenty spacious with six to seven inches ahead of my knees when sitting behind the driver’s seat that was preset for my five-foot-eight medium build frame, plus plenty of room for my feet even with my largest clodhopper Timberland shoes on, plus about three to four inches above my head and four inches from door panel to shoulder and hips. Increasing the feeling of spaciousness is a large dual-pane panoramic glass sunroof overhead, but those relegated to the rear middle position won’t likely care much about such niceties as the sizeable centre tunnel makes it less than ideal, but such are the challenges of rear- or all-wheel drivetrains. It’s really more of a four-seater with space for five in a pinch, a comfortable flip-down centre armrest nicely dividing the two rear seats while adding two pop-out cupholders and a shallow felt-lined compartment. The trunk is large at 480 litres (17.0 cubic feet), while the rear seatbacks can be lowered via the optimal 40/20/40 configuration to allow for greater passenger and cargo flexibility.

The only equipment group that wasn’t included was the Intelligent Drive package that adds a host of active safety and autonomous driving features such as Distronic Plus adaptive cruise control with steering assist, Pre-Safe Plus monitoring with rear-end collision alert and mitigation, BAS (brake assist) Plus with rear cross-traffic alert, Active Blind Spot Assist, Active Lane Keeping Assist, and autonomous emergency braking, most everything needed for a self-driving car. Additional standalone options can include a head-up display unit, heatable steering wheel, rear window sunshades, and a powered rear shade, while my loaner was upgraded with a powered trunk lid.

Standard features with the $43,800 base C300 4Matic that were grandfathered up to my tester included heatable power-folding side mirrors, an electromechanical parking brake, pushbutton ignition, rain-sensing wipers, dual-zone automatic climate control, a Nappa leather-wrapped multifunction steering wheel, a colour multi-information display, a large state-of-the-art high-definition tablet-style infotainment display with superb graphics, rich colours, full functionality and easy usability that’s modulated via one of the slickest touch-sensitive and knurled metal dial-type controllers in the industry, complete with smartphone-style capability that allows gestural inputs such as pinch and swipe plus tap and click, etcetera. The only negative is the exclusion of Apple CarPlay and Android Auto, an oversight that probably won’t turn anyone off the car completely, but should cause the C’s diehard faithful to question why.

The standard safety suite includes all the usual active and passive systems as well as Attention Assist, Collision Prevention Assist Plus, regular Pre-Safe and Blind Spot Assist, adaptive braking with a hold function, and runflat tires, which is enough to earn it both IIHS Top Safety Pick Plus and NHTSA five-star status. These base features, as well as all of my C300 4Matic tester’s extras, including some lesser items not mentioned, raised its base price to just over $58k, which still seems reasonable when considering how fully featured and impressively finished it was, not to mention how brilliantly it drives.

Ask any German luxury car owner why they prefer their brand and it will often come down to driving dynamics. The C-Class simply delivers at a higher level than most peers, with a wonderful balance of ride comfort and handling prowess. I’m not going to go so far as to say the C300 is as capable through the corners as the equivalent 3 Series, which many consider the quintessential sports sedan, but it comes very close while delivering a more comfortable driving experience overall. What’s more, the C300’s 2.0-litre twin-turbo four-cylinder feels more powerful than BMW’s mid-grade four and is, the 328i making a single horsepower less albeit lacking a significant 15 lb-ft of torque when compared side-by-side with its main competitor, the C300’s engine putting out 241 horsepower and 273 lb-ft of torque. Its 4Matic all-wheel drive makes sure the wheels with the best grip get more twist, the result being a spirited launch off the line and good positive shifts from its standard 7G-Tronic seven-speed automatic.

Those shifts get energized when Sport or Sport+ mode is chosen, Eco and Comfort more suited to a relaxed driving style. These not only alter the transmission shift points, but also throttle response and the suspension setup, whereas a fifth Individual mode lets you design a Dynamic Select mode that’s all you own, even allowing pure manual shifting via the gear lever or steering wheel paddles if DIY is more your style. As is now becoming the norm with German cars an auto start/stop system shuts down the engine when it would otherwise be idling, thus saving fuel and reducing emissions. It helps the C300 4Matic eke out a very reasonable 10.1 L/100km city, 7.8 highway and 8.9 combined rating, which just happens to be identical to the 328i xDrive’s estimated city/highway number despite the Merc’s performance advantage.

The C300 4Matic’s electro-mechanical steering is highly reactive yet rock steady at speed with very little deadness at centre. It also gives commendable feedback, as does the entire multi-link suspension, but like I mentioned earlier the little Merc is as much about performance as comfort, the C300 being my first choice in the D-segment for a high-speed long distance cruise.

I have to admit that Mercedes’ C-Class would be my first choice for a lot of reasons, and this from a four-times past BMW 3 Series owner. The C has long been competitive with the 3 from a performance perspective and the car’s styling is now much more dramatic inside and out, while it’s a class above all comers in interior quality, something I’m a stickler about.

So if you’re ever wondering why there are so many C-Class sedans running around, don’t think for a second their drivers have merely bought into Mercedes’ slickly marketed three-pointed star brand image, because the current car is easily one of the best, if not the best in its class. Do yourself a favour and drive a new C300 4Matic.
©(Copyright Canadian Auto Press)
Car Shopping Tools