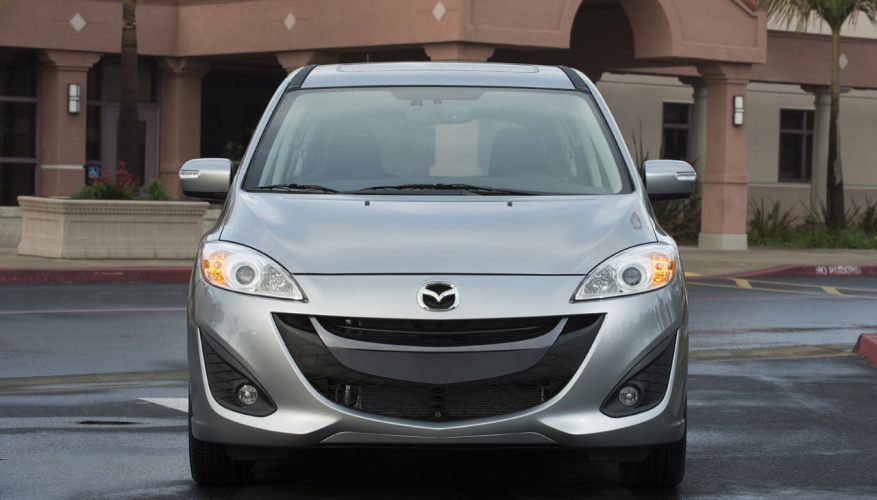 By: Trevor Hofmann
Minivans are a still big deal in Canada. This 2017 Mazda5 is no longer available in any other North American market, but it still finds favour here. The 5 was once part of Mazda’s Mexican and U.S. lineups, but sluggish sales due to greater focus on SUVs meant the 2015 model year would be its last. It’s still popular enough here for a lifecycle extension, however, Mazda stretching its usual four- to five-year tenure into a sixth model year for this practical compact.

The Mazda5 first arrived on the scene in 2005 as a 2006 model, and quickly found favour with smaller families that required maximum utility. Riding on a compact and therefore lightweight Mazda3 platform that, together with a fuel-efficient four-cylinder engine, combined frugal ownership costs with sporty performance, the 5 nevertheless came jam-packed with six seats and rear access via side sliders.

It became popular enough that sales rose to 11,690 units in 2007, a number that becomes even more significant when factoring in U.S. buyers that only totaled 13,717; a country that’s roughly ten times our population. The first-generation Mazda5 sold strongly up until it took a hiatus in 2011 to return completely renewed for the 2012 model year, with sleeker styling, a redesigned interior, and a slight bump in engine output thanks to 200 cubic centimeters of increased displacement, although its spacious cargo capacity remained unchanged at 112 litres (3.9 cubic feet) behind the rearmost seats, 426 litres (15.0 cubic feet) behind the second row, and 857 litres (30.2 cubic feet) behind the front row.

Despite being a better van in most every respect, sales steadily declined for the same reasons they had in its other North American markets, the popularity of crossover SUVs, with only 2,523 Mazda5s delivered last year and just 1,231 sold over the first nine months of 2016. Still, the 5 has a very loyal following that Mazda Canada apparently doesn’t want to give up on.

Just the same, the 2017 Mazda5 soldiers on unchanged from last year’s model, which was identical to the model year before. This means its two trim levels remain GS and GT, with both powering the front wheels via a 2.5-litre four-cylinder engine that’s good for 157 horsepower and 163 lb-ft of torque, while a six-speed manual comes standard and a five-speed automatic is optional. Fuel economy for both trims is minivan class leading at 11.1 L/100km in the city and 8.3 on the highway with the manual or 10.8 city and 8.2 highway with the auto.

The Mazda5 rides on a fully independent suspension with struts, coil springs and a stabilizer bar up front, and a multi-link setup with coil springs and a stabilizer bar in the rear, while the steering is conventional electro-hydraulic assisted rack-and-pinion. Additionally, braking is strong thanks to four-wheel discs with ABS, electronic brake-force distribution and brake assist.

Safety in mind, where most Mazda models qualify for IIHS Top Safety Pick Plus status, the last 2015 Mazda5 tested by the U.S. organization didn’t fare well with the worst Poor rating for its small overlap front crash test, a second-rung Acceptable rating for its head restraints and seats, a better Marginal rating for side impact tests, and top Good ratings for both moderate overlap front and roof strength tests.

The base GS model can’t be upgraded with any safety equipment, but it does offer two option groups starting with the $1,200 Convenience package that includes a leather-wrapped steering wheel, cruise control, a trip computer, Bluetooth phone connectivity with audio streaming, and an alarm. Adding the $1,400 Moonroof package first requires a step up to the $1,200 automatic transmission, at which point it adds a powered tilt and slide glass sunroof over the front occupants, two tweeters for a better sounding stereo, satellite radio, rear backup sensors, and side sill extensions.

Mazda also offers four different 16-inch or 17-inch alloy wheel designs to personalize your Mazda5 GS or GT respectively, while both models can be had in three standard colours including Aluminum Metallic (silver), Jet Black Mica, and Zeal Red Mica, plus a $200 optional colour, Snowflake White Pearl. Black is the only interior colour for the GS, but in addition to upgrading the base model’s black cloth to black leather with red piping when upgrading to GT trim, there’s also the no-cost option of Sand (beige) leather with red piping.

The Mazda5 may no longer be cutting edge as far as styling, powertrain tech (especially when compared to Mazda’s usual highly efficient Skyactiv lineup of engines and transmissions), standard and optional features (it doesn’t include a display audio system let alone modern infotainment), but nothing delivers as much utile practicality in the compact class, let alone combining all that functionality with such rewarding driving dynamics.