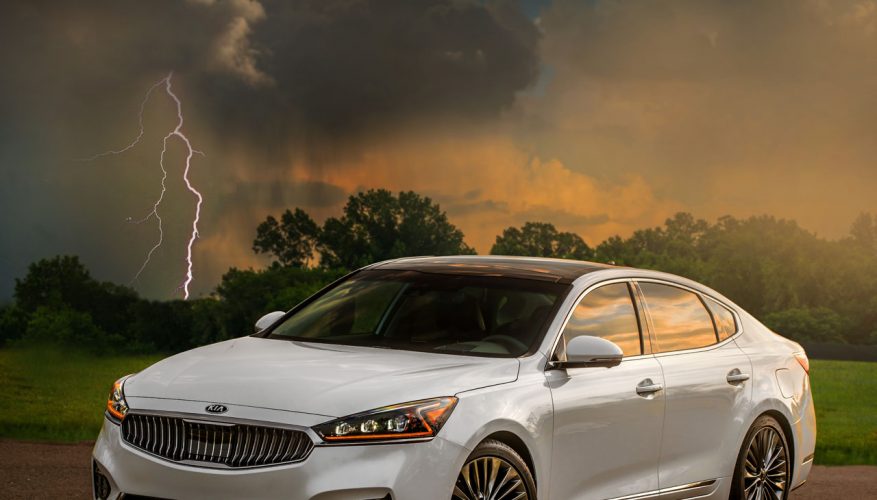 By: Brian Armstead
Cadence is defined by Merriam-Webster as the beat, time, or measure of rhythmical motion of activity. Likewise, the 2017 Kia Cadenza is defined by the beat of its 290 horsepower V6, and the rhythmic motion produced by galloping along country roads.

So what better place to introduce a vehicle that combines power and motion than an equestrian themed resort in Loudon County, Virginia? Yes, the Salamander Resort served as a first-class launching pad for Kia’s first-class mid-size luxury sedan.

Mercedes-Benz E-Class, BMW 5 Series, Lexus ES/GS, Audi A6, Lincoln MKZ/MKS, Tesla Model S, (Hyundai) Genesis G80, Cadillac CTS/CT6, Jaguar XF, Infiniti Q70, Acura RLX, and Volvo S90: There’s a ton of competition in the class of luxury vehicles base priced between $40-70k. All have qualities that endear them to followers and conquest owners. The Germans sell you on driving dynamics and safety, the Japanese sell you on luxury without second mortgages to pay for it, the American brands hark back to better days, and the Swede is staging a serious comeback, combining Volvo’s legendary safety with a new flash of luxury. So where does that leave the Korean brands?

Well, while corporate cousins Hyundai (Genesis) and Kia share technology, they are locked in a pitch battle for peninsula supremacy. Hyundai fired the first salvo in the civil war with the Equus. Stately and full of luxury, but not a serious competitor to big boys S-Class, 7 Series and A8. Hyundai’s new Genesis luxury division with the G90 as the first product has received rave reviews from my automotive colleagues, and for good reason. It’s a tight, well performing, super luxurious package. Kia answered the Hyundai fusillade with the K900. A nice car, but does anyone besides LeBron James own one?

Step it down one level of luxury and the game gets more complicated, but this time, in my humble opinion, Kia is like Floyd Mayweather, a pound for pound champion that adds power, credible handling, requisite luxury, and Volvo-like safety features, all at a price that’s sure to boggle the mind.

Now let’s delve even deeper and consider what Kia has accomplished since coming to Canada with the Sephia, Spectra and Sportage more than 17 years ago. Lacking style, crashworthiness, and reliability, Kia at one point ranked dead last in dependability and customer satisfaction ratings by J.D. Power. But the Koreans are very smart automakers. At first using unreliable powerplants built in Japan, Kia now engineers and builds its own engines and transmissions, which are amongst the industry’s most reliable. Over the years, style and utility entered the equation. Sportage and Optima are household names now. And who doesn’t know about the fun loving Hamster-mobile, the Kia Soul? A steady pace, coupled with one of the industry’s best comprehensive warranties (5 years/100,000 km), and Kia’s formula for success grew more complete each year.

For 2016, guess what automaker is now at the top of the J.D. Power Initial Quality list? No, it’s not Toyota, Lexus or Honda. It’s Kia.

Where the Optima used to be the top dog for Kia, the K900 and Cadenza now rule the roost, and for 2017 this newly redesigned Cadenza is better than ever.

Style wise, the 2017 Kia Cadenza’s expressive shape is evolutionary. No need for a dramatic redesign, as the outgoing 2016 model was already a looker.

This second generation Cadenza features a definition contour that spans the length of the car. This “line” visually links matching Z-shaped lighting signatures in the headlights and LED taillights. Day or night, it makes a strong visual statement.

Inside, Cadenza’s wraparound dashboard flows into the door panels and features real stitching. Nappa leather trim is available with quilted seat bolsters accented by a diamond-shaped stitch pattern. A new head up display shows key driver information such as speed and turn-by-turn navigation directions. A higher resolution surround view monitor gives a clearer view of the area around the vehicle, and newly added reverse guidelines help you ease into tight spaces. Other key features include Smart Trunk, which conveniently opens the trunk lid if the sensor detects the key fob for more than three seconds, and a wireless smartphone charger. Apple CarPlay is standard, with Android Auto coming before the 2017 calendar year ends. Do you like music you can feel? Then the 12-speaker 630-watt Harman/Kardon audio system featuring “Clari-Fi” music restoration technology is an option. Depending on trim level, you can enjoy a dual-pane panoramic moonroof, and a seven- or eight-inch UVO infotainment and telematics display.

Befitting its luxury class credentials, the 2017 Kia Cadenza features standard or optional high tech driver assistance features such as Advanced Smart Cruise Control with stop-and-go functionality, Forward Collision Warning, Autonomous Emergency Braking, Lane Change Assist, Lane Departure Warning and the very useful Rear Cross Traffic Alert (RCTA). Ever inched out of a shopping mall parking spot hoping no one tears your rear bumper off because they don’t see your vehicle clearly? RCTA senses traffic left and right and, together with your rearview camera, makes backing up safer. The available Smart Blind Spot Detection System can detect unintentional drifting toward an adjacent vehicle and automatically brakes the opposite side front wheel to help keep you in your intended lane. A driver’s knee bag brings the airbag total to nine in the new Cadenza.

On the road, the Cadenza performs well. While not a speed demon there’s ample power from the V6 to safely perform high-speed passing and have some fun on country roads.  The eight-speed tranny shows its value here, as it doesn’t “hunt” at any speed, and settles in nicely when you reach cruising rpm. Handling is fairly neutral, and there is no appreciable FWD torque steer, even under full acceleration.

Steering feel is more responsive than on the previous gen Cadenza with better on-centre feel thanks to a new 32-bit electronic control unit that replaces the 16-bit processor in the outgoing model; and Cadenza’s standard electronic motor-driven power steering, which eliminates the parasitic loss caused by power robbing serpentine belts. This is cool tech usually found on cars costing much more than the Cadenza.

With the aforementioned J.D. Power goal dead in its sight, Kia’s engineers focused on durability and reliability during the development of the Cadenza. Extreme testing, like running the V6 engine at full power and under full-load conditions for 41 consecutive days, which equates to more than 160,000 km of real-world use, shows the brand is determined to prove the 2017 Cadenza is built for the long haul.

The 2017 Cadenza comes in three trim levels in Canada, including base, Premium, and Limited, with each offering stepped up levels of comfort, safety, and convenience features. Prices have yet to be announced, but the outgoing model started at just under $38k.

So watch your rearview mirror for unique amber coloured daytime running lights the next time you decide to saddle up and hit the roads. A Korean-built horse named Cadenza may be sneaking up on you.