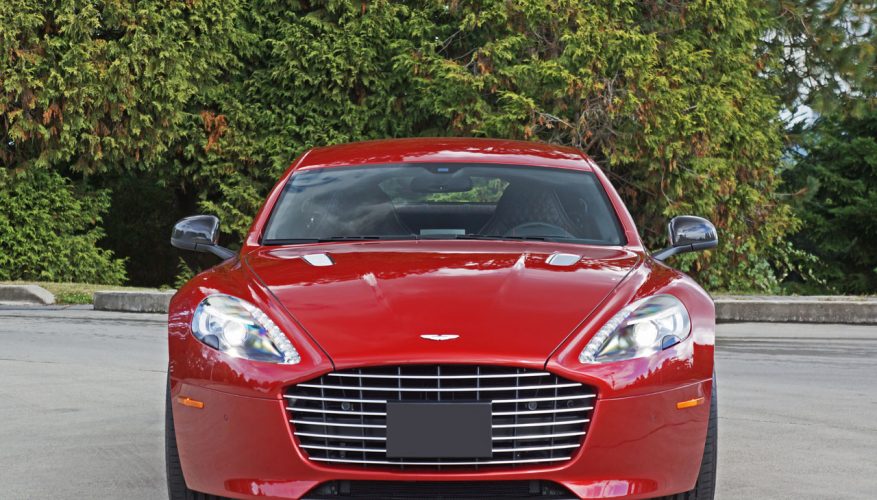 By: Trevor Hofmann
Aston Martin wasn’t the first to arrive with a modern-day four-door coupe, but through its Lagonda division it could certainly be considered inspiration for Mercedes’ CLS and others that would follow.

The ultimately angular, incredibly luxurious Lagonda sedan was produced from 1976 to 1990, long before the term four-door coupe was coined, but it certainly met all criteria. It was long, wide, low, powerful, and opulent, much like the original DB4-based Lagonda Rapide sold from 1961 to 1964, but of course neither can compare with today’s Rapide.

Its forerunners were handsome in their own unorthodox ways, the original elegantly penned except for its controversial Ford Edsel-like horseshoe-shaped grille, and the second car’s unique “folded paper” design outrageously exotic for the era and still a jaw-dropper today (I especially like the slightly rounded 1987–1990 Series 4), if you’re fortunate enough to see one in the metal (aluminum to be precise), but the thoroughly reimagined Rapide that debuted in 2010 as a 2011 model was beautiful from each and every vantage point.

Aston freshened it to the current design for the 2014 model year, its grille deepened, a larger integrated spoiler swooping up from its rear deck lid, fascias revised front and back, some refinements made inside, and an “S” added to its nomenclature, the latter actually representing a significant bump in performance from the first generation car’s already impressive 470 horsepower and 443 lb-ft of torque to an altogether more motivating 552 horsepower and 457 lb-ft of torque. For 2015 Aston upped twist to 465 while dropping its outdated ZF six-speed automatic for a new eight-speed Touchtronic III ZF-sourced unit capable of 130-millisecond shift speeds, Normal, Sport and Track modes, and much smoother operation, upgraded the Bosch engine management system, included larger retuned brakes, equipped it with 20-percent stiffer suspension bushings, refreshed the interior with new upholstery, and more.

It would be understandable if Aston had left the 2016 model alone, but such is not so. While this year’s basic car remains unchanged, the centre stack is completely revised with more up-to-date touch-sensitive controls for an easier user experience, not to mention a nicer look. Don’t worry, billet aluminum knobs are still an important part of the package, but now its various buttons are under smartphone-style black glass. This update, initially ushered in by the Vanquish, is now brand-wide, while the Rapide’s updated AMi III infotainment display continues to power up out of the dash top, Aston far ahead of this trend although the screen’s 6.5-inch size is a tad small, its internal graphics bright and colourful but not particularly artistic, and general functionality adequate but hardly groundbreaking (Aston boasts about its ability to voice incoming text messages as if this tech is something new and unique). The Garmin-sourced navigation system is superb, mind you, audio excellent despite my tester not sounding off with the Bang & Olufsen upgrade, and the integrated horsepower and torque meters brilliant fun.

Then again I didn’t have much time to check them at the most appropriate moments, because when the big 6.0-litre V12’s at full song the long, luxuriously appointed four-door requires full attention out front and side windows, not to mention in the mirrors and at the controls. Standstill to 100 km/h takes a mere 4.4 seconds ahead of a 327-km/h (203-mph) top speed, of which I’ll likely never experience, but no matter as the Rapide S is more about the expedited journey than any lofty destination.

Truly, if there’s a better sounding internal combustion engine please bring it on by, as Aston’s 12 is an auditory delight, producing a simultaneously refined yet raspy note that’s only upstaged by the thrill of gravitational forces pressing backside into perfectly formed seats, each tug at the eight-speed’s right-side paddle producing another raucous albeit instantaneous bark and yet more mesmerizing speed. This may be a four-door liftback, but it drives every bit as enthusiastically as the epoxy resin bonded lightweight aluminum-bodied DB9 GT it’s based on.

In fact, the transmission feels smoother than the two-door version and much easier to modulate than any Vantage, with Sport mode increasing responsiveness yet never to the point of aggression. Likewise for the adaptively damped chassis that provides ample shielding from untoward dips and bumps yet somehow stays locked on purpose no matter the irregularity of the road surface, while steering feel is brilliantly connective and braking shockingly strong, the Rapide much lighter and more agile feeling than any of its German competitors, although I use that last word lightly.

Let’s get real for a moment. While you can dress up a CLS or Panamera with ridiculous levels of power, torque, road-holding capability and luxe amenities, not to mention pricing that rivals this four-door Brit (with respect to the latter), neither comes across anywhere near as exotic as the Rapide and therefore aren’t truly competitive. Ditto for the M6 Gran Coupe or RS7. From the otherworldliness of the Rapide S’ rumbling V12 to its knee weakening styling, the big Aston is king of the four-door coupe hill, and I haven’t even expounded upon the interior.

Certainly I’ve mentioned the updated centre stack, but as slick as that is it’s merely the business side of the internal equation, the primary gauge package also function-first albeit as much about relating engine revs and speed as an A. Lange & Söhne Zeitwerk Minute Repeater is about telling time. Truly it provides all needed information immediately and legibly, but it does so in such an exquisitely inventive fashion that mere data transforms into kinetic artwork.

With less pull on the eyeballs yet plenty of idiosyncratic intrigue are large round buttons across the top of centre stack for selecting gears, while the underlying surface treatment from top to bottom was a gorgeous optional matte weave carbon fibre that nicely offset the the rest of the cabin’s glossy piano black lacquer trim, aluminum and metal brightwork detailing, and red-stitched leathers and suede.

As noted the seats are superb, those in the rear mirroring the Rapide’s front bucket-type perches, other than in adjustability. I actually found accessing those in back a bit of a squeeze (this isn’t the newish Lagonda Taraf after all), although once ensconced within they were certainly comfortable and roomy enough with a couple of inches left ahead of my knees when the driver’s seat was set for my five-foot-eight medium-build frame, and about three inches above my head, plus pretty decent hip and shoulder space as well as room for my elbows on the door and centre armrests. That centre one is more of a full console replete with rear auto climate controls, three-way heatable seat buttons, and switches for the overhead LED reading lights, plus cupholders of course. The artisanship is as impressive in back as up front.

Really, Aston even went so far as to match the ornately detailed leather and red-stitched seat inserts with an identically designed roofliner for a level of over-the-top bespoke luxury that had me checking my mirrors for a flotilla of fast-moving black Tahoes about to pull me over for absconding with one of Sheikh Shujah’s private fleet. I can’t say for sure if the son of the Singaporean oil tycoon Sheikh Babu Nooruddin owns a Rapide, but it would make perfect sense for double speed dating, especially if a quick ski trip through the Col de la Forclaz to Chamonix becomes part of the plans.

While impeccably finished as far as cargo compartments go, the rear seatbacks innovatively split in half to allow a surprising amount of life’s collectibles, whether you’re loading in ski equipment or other long items. There’s also a divider that pops up to section off gear from groceries or what-have-you, plus a shallow hollowed out bin below the load floor.

As you can imagine the base $240,460 Rapide S comes well stocked with features. Pretty well everything mentioned is standard kit except for all the fancy red stitched and quilted Obsidian Black leatherwork, the piano black lacquer, the “Twill Carbon” treatment on the centre stack, and those folding rear seatbacks, while charging extra for an auto-dimming rearview mirror is more than just odd. My tester’s exterior was upgraded with Volcano Red paint, red brake calipers, a carbon-fibre package replacing the normally body-colour front splitter, rear diffuser, mirror caps, door handles and taillight garnishes with CFRP, plus a stunning set of 20-inch 10-spoke alloys and three-stage adaptive dampers, with the final tally coming to $285,282.50 before factoring in freight, dealer fees and taxes.

Yes, that’s a considerable sum of money for any car, although the handcrafted appeal, sensational performance, and ultimate beauty of this Aston Martin Rapide S makes it more than worth the asking price, while it’s also important to point out Porsche’s latest Panamera will pass right on by $250k when loaded up with features. I’m not going to tell you which one to buy, but consider that one is a bonafide exotic and the other comes from a brand that makes most of its money selling mid-size family haulers.

Until Lamborghini arrives with its long anticipated Estoque or something similar, or Bentley and Rolls come to market with four-door coupe versions of their two-door GT and Wraith respectively, the Rapide S remains the only genuine exotic in this class. So if you simply must have the best four-door coupe available you’ll need to make this Aston Martin Rapide S part of your personal collection.
©(Copyright Canadian Auto Press)
Car Shopping Tools