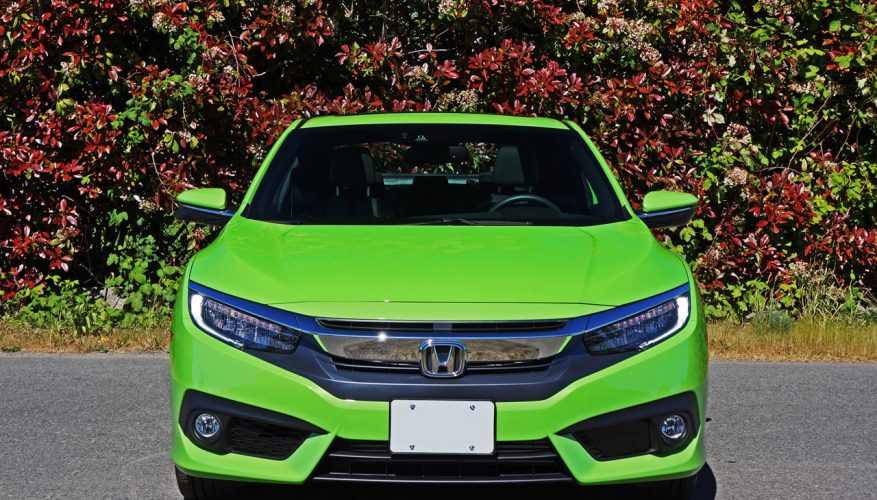 By: Trevor Hofmann
I just spent a few minutes tallying up all the Civics loaned to me for weeklong tests and arrived at 23 since I started in this business more than 16 years ago, which makes it one of my most reviewed models ever. Thank you Honda.

This realization makes me grateful for the Japanese brand’s support over the years, as well as for all the great memories with this special little car. I may not have gloated over its many permutations with the same fervour as I laud praise on this newest model, but to be completely honest even the worst Civic was better than most of its competitors. Of those 23 Civics eight were Coupes, which while a rather clumsy segue brings me to my latest test car. Therefore without further ado I add a ninth Coupe and 24th Civic to my ever-lengthening list.

If you’ve never experienced a Honda Civic, you’re truly missing out. Even if you only drive premium branded sport/luxury models, take note there’s something very special about this car that not only sets it apart from all peers, but also gives it near premium cachet. This is especially true of any Civic Si, a car fitted with the best six-speed manual made, period, and one of the most entertaining engines and brilliantly capable chassis’ in the industry. Many are faster, but none better.

The day-glow Energy Green Pearl painted 2016 Civic Coupe Touring in front of you (a colour not available in base models) looks every bit the part of Honda’s revered sport compact lore, but despite its eye-searing styling, big machine-finished alloys, and perforated leather-clad, high-tech cabin, this particular Honda is more about cruising the strip than conquering the track. To be clear this has very little to do with the powertrains available, Honda offering up two impressive engines this year. The first is the base LX model’s naturally aspirated 2.0-litre four, which is capable of 158 horsepower and 138 lb-ft of torque. A wonderful little engine, I tested this one out last fall in Sedan EX trim and really enjoyed its performance. Granted, I would have had more fun in the base LX with the manual gearbox, but considering the vast majority of buyers opt for the automatic we journalists rarely get opportunity to drive DIY gearboxes anymore. In fact, the take-rate for manuals is so low that Honda only uses one in the 2016 Civic’s most basic trim; the EX and Touring models coming standard with the CVT.

The same is true for the Coupe, which comes in three trims for 2016 including the $19,455 LX, $24,555 EX-T, and top-line $27,555 Touring tested here. This fully loaded model includes new Honda Sensing technologies as standard (more on these in a moment), whereas the first two trims make them optional at $21,755 for the LX Honda Sensing and $25,555 for the EX-T Honda Sensing. As an old-school enthusiast it bothers me that Honda eliminates the manual from the more luxe- and tech-filled models because these are nicer for many reasons, especially their shared 1.5-litre direct injected and turbocharged powertrain that makes a healthy 174 horsepower and 162 lb-ft of torque. Si fans won’t likely be enthused as it’s some 31 horsepower and 12 lb-ft shy of the last 2015 Coupe Si I tested (the Si version of the current car has yet to arrive), and even a bit short of the new 2017 Civic Hatchback that uses this top-line Sedan and Coupe engine for its base LX trim and makes a slightly stronger 180 horsepower and 177 lb-ft version available above that, whereas the upcoming Civic Type R (which will debut at SEMA in November) will be even more potent than the previous Si.

Back to reality, at least for now, even the current Civic Coupe Touring is much more capable than we Canadians can legally enjoy. The tiny engine is tractable from almost anywhere in its rev range, which certainly helps make the most of the CVT. Honda does a pretty good job of maximizing the fun factor of this continuously variable transmission as well, by modifying its “one-speed” nature to include artificially stepped gear ratios that mimic the real deal with reasonable effect. It also receives a Sport mode that lets the revs spin higher between shifts, aided by a nice set of paddle shifters on the steering wheel, but to be clear, performance purists will want to opt for the lesser LX, choose any one of the new five-door Civic Hatchback models that make the six-speed manual available throughout the trim range, or wait for the upcoming Si and Type R, because as good as this sport-tuned CVT is, I found myself leaving it in Eco mode most often, which I must admit was a big win when I needed to refill the tank.

Honda’s claimed rating for the upgraded turbo four and CVT is 7.6 L/100km city, 5.5 highway and 6.7 combined, even better than the base engine/CVT combo’s 7.8 city, 5.8 highway and 6.9 combined rating despite the added power, whereas the base mill with the six-speed manual is least thrifty at the pump at an estimated 8.9 city, 6.1 highway and 7.7 combined. Still, any of these numbers read economy car rather than performance-oriented sports coupe, which is a big bonus to Vancouver buyers that really haven’t benefited much at all from the drop in oil prices.

Honda adds a green leaf graphic Econ button for eking out the best mileage, and it’s a more discreet black square situated down on the lower console than the old car’s big green blob on the instrument panel. This newfound sophistication isn’t just kept between the seats, but rather the entire Civic cabin is a feast for millennial eyes. Really, while its bright, high-resolution full colour displays directly target those who spent most of their formative years in front of digital screens, even those of us who remember life before colour TVs will appreciate the new Civic’s high-tech electronic interfaces, from the brilliantly clear and colourful primary gauge package featuring a seven-inch TFT multi-information display at centre, to the superb infotainment display jutting out atop the centre stack it’s the best of the best, even superior to many luxury-branded compacts in both form and function.

The multi-information display and numerous other functions are controlled via high quality steering wheel switchgear that even features a touch-sensitive audio volume slider, while the infotainment system’s touchscreen is infused with HondaLink, Apple CarPlay and Android Auto, SMS text message and email functionality, Wi-Fi tethering, dynamic guidelines for the multi-angle rearview camera, a fabulous sounding 450-watt 10-speaker audio system, HondaLink Assist automatic emergency response, and more. A slick dual-zone auto HVAC interface rests just below, complete with a useful “CLIMATE” button at centre that changes the infotainment screen to user-friendly HVAC graphics when pressed, while just below is a wireless charger enhanced tray that was large enough for my Samsung Note. The rest of the cabin is a mixture of premium-like soft touch surfaces and the usual harder plastics, albeit the latter matte finished for less sheen, while ultra stylish brushed aluminum-look inlays enrich the design.

My tester’s leather seat upholstery was two-tone black and dark grey, the black used for sporty stripes down each bolster and at centre, and the door inserts covered in grey leatherette for a cohesive look. There’s no shortage of space, the Civic seeming more mid-size than compact even in back where the seats are very accommodating and quite comfortable for a sport coupe. I actually had about six inches in front of my knees when the driver’s seat was positioned for my five-foot-eight height, while three inches remained above my head. The rear seats provided good back support too, but there’s no centre armrest and the ones to each side are uncomfortable hard plastic. At least the seatbacks are 60/40-split for managing cargo and equipped with handy release pulls under the lid, the Civic Coupe Touring’s 337-litre trunk (which is six litres larger than last year’s Civic Coupe Touring) fairly sizeable for the class.

That trunk is the Coupe’s most interesting element, although I’m now referring to the way it looks from outside. Honda had already taken the compact segment on a complete visual departure when the Civic Sedan arrived on the scene, but the Coupe’s wrap-over taillight design is even more unusual. It’ll be sure to cause division amongst friends and family, with lovers and haters alike, but at least no one will call it boring anymore. Honda finishes off the rear bumper with a diffuser-like black mesh insert that pulls cues from the lower front fascia, my tester’s upgraded with a nice set of circular fogs and even more impressive full LED headlamps.

These come standard with the Touring, a model that also includes the aforementioned 17-inch alloys on 215/50R17s, plus most every other feature you’d expect on and within a fully loaded compact such as auto on/off headlights, LED turn signals on the side mirrors, LED taillights, remote start, proximity-sensing access with pushbutton ignition, walk-away powered locks, heatable powered side mirrors, an auto-dimming rearview mirror, an electromechanical parking brake, one-touch turn signals, rain-sensing wipers, navigation, Bluetooth phone and audio streaming, HD and satellite radio, multiple USB ports, a powered moonroof, plus everything already covered and more, not to mention all the gear pulled up from LX and EX-T trims.

On that note, remember Honda Sensing? It includes forward collision warning with collision mitigation braking, plus lane departure warning, lane keeping assist and road departure mitigation, as well as adaptive cruise control with low-speed follow, which just happens to be most of the electronic equipment needed for an autonomous car, although the Civic Coupe isn’t set up for self-driving yet. So equipped it achieves IIHS Top Safety Pick Plus status, mind you, whereas all Civics are good for five stars from the NHTSA.

One of my all-time favourite active driving aids is Honda’s exclusive LaneWatch blindspot display that shows a passenger-side rearward view on the infotainment screen when flicking the turn signal to the right, while the Civic Coupe gets all of the usual standard active and passive safety gear.

Also notable, all Civics feature stability assist-managed torque vectoring dubbed Agile Handling Assist (AHA) to improve responsiveness. AHA applies unnoticeable braking force to the inside wheels when the steering wheel is turned, and then the same to the outside wheels when steering is returned. Additionally, Straight Driving Assist reduces steering effort when moving on a sloped or crowned road surface.

All Civics ride an a comfortable yet very capable independent front strut and rear multi-link suspension with stabilizer bars front and rear, the Coupe’s setup tuned a bit more for performance than the Sedan’s, while I found the electrically assisted rack-and-pinion steering quite plenty responsive with decent feedback for a front driver. Likewise, braking is excellent for the class.

Still, there are a number of other sporty two-door hardtops in the Civic Coupe’s compact class that are more exciting to drive, and not just because of the CVT, although few offer rear seating anywhere near as comfortable or a trunk as large. The Civic Coupe is therefore a compromise, but it hardly compromises on style, technology, build quality, or safety. Rather, it’s by far the class leader in all of the above.
©(Copyright Canadian Auto Press)
Car Shopping Tools