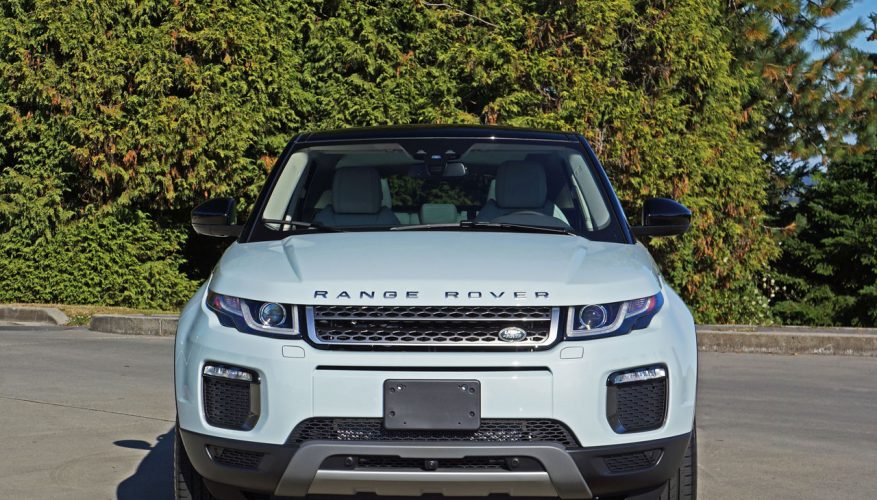 By: Trevor Hofmann
The Evoque remains the most ideally proportioned and arguably best looking subcompact SUV on the market, and this despite being the oldest design in its class. In fact, there was no subcompact luxury SUV segment in Canada the year before it was introduced in 2011 as a 2012 model, although BMW and its Mini line brought their X1 and Countryman to market earlier that same year.

Four years is a bit long to go without any visual updates, and to many the subtle changes made to this mildly refreshed 2016 Evoque won’t be enough to lure them back, a possible reason for the model’s declining sales. It was never going to match the X1’s numbers, however, this made clear in their first full year of sales when BMW found 4,776 X1 buyers and Land Rover just 1,254 for the Evoque, while even Mini managed to find 1,731 Countryman buyers that year.

Mini, which hasn’t changed the Countryman’s design one iota since inception, is now lagging the entire segment with just 531 deliveries over the first eight months of 2016 (even Fiat sold more near-premium 500X models), but an entirely new X1 (ironically based on the Countryman) has raced into segment sales leadership with 3,153 units down the road during the same period. And yes, that means the Bimmer is currently ahead (albeit only by 25 units) of the Mercedes-Benz GLA, which was introduced in 2014; whereas Audi had 2,756 Q3 deliveries as of August, a model that arrived on the Canadian market in 2014 yet was significantly revised for this 2016 model year; and the new Infiniti QX30 just started trickling into dealerships last month and therefore found just 21 buyers. Only the Buick Encore sells in slightly higher numbers (3,523 so far) than the X1, although it’s more of an entry-level luxury model than a real premium contender. As for the Evoque, its sales grew to 1,782 in 2013, stayed fairly steady at 1,706 in 2014, and then jumped to 2,162 units last year, but so far this year it’s only managed to attract 1,093 buyers.

There are some significant factors working against the Evoque’s sales success, particularly its elevated base price. The Evoque starts life at $49,990 plus freight and fees, which is not only more than all of the subcompact luxury SUVs mentioned (by a long shot), but it’s pricier than all larger compact luxury SUVs, even the Porsche Macan and its Land Rover Discovery Sport half-sibling, let alone its kissing cousin, the Jaguar F-Pace. No wonder it sells in lower numbers, but is it worth the extra coin?

There are some that adhere to the bigger is better philosophy, which infers that moving up into a larger segment somehow buys you a more appealing vehicle. I couldn’t agree less. Certainly this is true within most brands, the Range Rover Sport a worthwhile jump up from this Evoque, and the full-size Range Rover about as over-the-top impressive as SUVs get, especially in top-line Supercharged Autobiography trim, but none of its direct peers match the little Evoque for driving dynamics (except the GLA, particularly in 45 AMG trim).

The Evoque starts with a turbocharged 2.0-litre four-cylinder that puts out a zippy 240 horsepower and 250 lb-ft of torque and comes mated to a class-leading adaptive shift program enhanced nine-speed automatic, controlled by the coolest knurled metal rotating dial selector ever, that’s much more engaging than the previous six-speed unit, as I mentioned after first testing it last year, and considerably smoother and more refined feeling this year. While fuel efficient at a claimed 11.3 L/100km city, 7.9 highway and 9.7 combined, this is the most powerful base engine in the class resulting in a 7.6-second sprint from zero to 100km/h and a top speed of 217 km/h (135 mph), and while this doesn’t measure up to the aforementioned GLA 45 AMG’s 375 horsepower and 4.4-second to 100km/h segment dominator, it’s still a great deal quicker than Mini’s top-line John Cooper Works-tweaked Countryman when mated to its autobox, and only beaten in torque by the X1 (with a mere 8 lb-ft more), albeit a whole second to 100km/h.

The Evoque also comes standard with an advanced four-wheel drive system that’s even capable of serious off-roading. For comparison, Audi, Buick and Infiniti offer cheaper front-wheel drive versions of their competitive models, while BMW, Mercedes, Mini, and this Range Rover hit the road with all-wheel drive or nothing. This said even when upgrading all of these rivals with AWD, none offers anything near the Evoque’s 4×4 prowess. I’m guessing most Evoque owners won’t be trudging through waist deep swampland or mud-slinging their pretty little ride up the side of a mountain during spring runoff, or for that matter rock crawling through dry riverbeds in the heat of summer (search “Evoque off road extreme” for some incredible video footage), but they may find themselves knee high in fluffy white stuff after a weekend on the slopes, at which point they’ll be glad they spent extra for a real off-road capable SUV.

For such situations the 2016 Evoque’s Terrain Response system, which features pushbutton mode selection from normal to grass/gravel/snow, mud and ruts, or sand, has been upgraded with new All-Terrain Progress Control (ATPC), which maintains a driver selectable (via cruise control) speed of 1.8 to 30 km/h in either forward or reverse. This lets the driver solely focus on steering through difficult obstacles, rather than have to modulate the throttle too. It reminds me of the original Landy’s choke/accelerator linkage that could be used to do likewise, although this is light years more sophisticated.

The most impressive aspect to all this is the juxtaposing brilliance of the Evoque’s on-road manners. You’d think the segment’s best off-roader would be the least capable on a narrow strip of two-lane tarmac, but the opposite is true, it’s the Golf GTI of the lot. I hope the folks at JLR don’t mind me comparing their ritzy subcompact SUV to a lowly mainstream volume compact (ok, the GTI is hardly lowly or mainstream, but VW is), it’s just that the GTI is legendary for its deft handling. The Evoque (not the Tiguan, sorry VW, or the Q3 which is basically the same vehicle) carries the agility torch amongst subcompact SUVs (Jaguar’s F-Pace shares it with the Porsche Macan for the compact lot, Range Rover Sport for the mid-sizers, although it may be tied with the X5M, Cayenne GTS/Turbo, and we’d have to go head-to-head with a Range Rover and Bentayga for full-size top-tier honours… anybody up for that?)

The Evoque’s adaptive suspension, brake-induced torque vectoring, wide rubber, and generally good mechanical dynamics, not to mention its relatively light 1,670-kilo (3,682-lb) curb weight thanks to prodigious use of high-strength steel throughout, aluminum for the hood and roof panels, plus polymer and composites for the front fenders and tailgate, give it an edge when the road starts to wind, while also providing a superb ride. So the question remains: Does the Evoque’s extreme 4×4 capability, superb handling, and comfortable ride seem like enough to make it so much pricier than its peers?

There were still options available, such as new full LED headlights with adaptive cornering and auto high beams, a new head up display unit, cooled front seats, etcetera, plus there are two trim levels above HSE, including HSE Dynamic and Autobiography that increase content further while modifying the Evoque’s styling with a unique front fascia and more.

As for that interior, it continues to please with impressive style and quality. Unlike some competitors, all roof pillars are fabric-wrapped, the dash top and instrument panel isn’t only soft touch but stitched leather, all of the beautifully detailed aluminum trim is genuine, and the switchgear quality is excellent. A few areas that are done better in one or two of its competitors include the lower dash panels, glove box lid and lower door panels that are finished in harder plastics, although the latter are comprised of a heavier-duty composite that might actually wear well for those engaged in more aggressive off-roading, while the rest of the SUV is more than up to standard.

While it’s a subcompact SUV, it’s quite roomy thanks to considerably more width than its competitors. Even if you’re larger than average you should have no problem fitting into the Evoque, as it’s headroom, legroom, plus shoulder and hip space is excellent for the class. The rear offers three-abreast seating for adults and ultra-comfortable accommodations for two, enhanced by a flip-down centre armrest filled with cupholders.

The cargo compartment is also nicely finished, with carpeting on the floor and sidewalls, mine upgraded with a rubber tray for protecting those carpets from wet things like skis, ski boots and outerwear, while a stainless trunk sill protector plate and chromed tie-down rings improve the look and functionality. The rear seatbacks split 60/40 and fold quite flat, while like the passenger compartment this model provides greater size for more cargo capacity than some of its rivals; the numbers reading 575 litres (20.3 cubic feet) with the rear seatbacks upright and 1,445 litres (51.0 cubic feet) when laid flat. A hard tonneau cover is standard, providing visual protection as well as a sturdy parcel shelf for lighter items.

Spend a little time with an Evoque and you’ll quickly appreciate how it managed to notch up more than 165 international awards since inception. This is a superb little SUV that keeps on getting better, even if the changes seem incremental. I recommend it highly.
©(Copyright Canadian Auto Press)
Car Shopping Tools