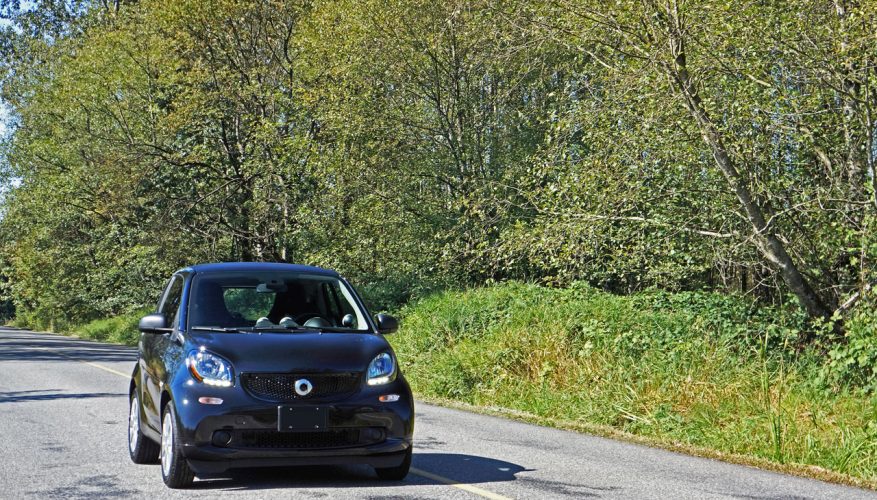 By: Trevor Hofmann
Smart’s “big” news for 2016 is a totally redesigned Fortwo, and it’s been worth the wait. Along with a tougher more assertive pug puppy look, a new and improved interior, plus better driving dynamics it’s also larger, which will certainly be a welcome change for those that found themselves rubbing shoulders with their passenger, although possibly disappointing for young and young-at-heart lovers who won’t be so close and personal anymore.

It gains 100 mm (3.9 inches) from side-to-side yet it’s still Canada’s smallest four-wheel car at a mere 2.69 metres (105.9 inches) long, which is identical to its forebear. It remains a two-seater that’s surprisingly capable of accommodating very large adults comfortably plus a sizeable cargo haul of 190 litres (6.7 cubic feet) in back when both seats are in use, or alternatively a maximum of 350 litres (12.3 cubic feet) when the front passenger’s seat is laid flat. Smart also retains the Fortwo’s handy split cargo door that combines a pop-up glass hatch with a useful pickup truck-style tailgate, the latter capable of temporarily holding up to 220 kilos (485 lbs) of cargo.

The Fortwo’s micro size makes for an ultra-light 930-kilo car that’s about as fuel-friendly as gasoline-powered conveyances get, at a claimed 7.5 L/100km city, 6.1 highway and 6.9 combined. These five-cycle numbers aren’t quite as good as those achieved by last year’s model, mind you, which managed 6.8 in the city, 6.2 on the highway and 6.5 combined. It all makes sense when factoring in the new car’s performance gains, but it’s difficult to understand why the U.S. EPA gave the 2016 Fortwo a marginal improvement in efficiency over its predecessor.

The Fortwo’s turbocharged 898 cc three-cylinder adds 19 more horsepower and 32 additional lb-ft of torque for a new total of 89 horsepower and 100 lb-ft, which means you’d better get a slip collar to keep this little pup from running amok. It certainly feels quicker off the line, while official numbers have the as-tested five-speed manual at 10.7 seconds from zero to 100km/h and Twinamic DCT autobox at 11.1, with a top speed of 155 km/h. The new model sprints nearly twice as fast as the first diesel-powered Fortwo I tested in 2005, by the way, which could only manage 19.8 seconds to 100km/h, and certainly more rambunctious than the first gasoline version of the previous generation I first drove at its official San Francisco launch in 2008, which zipped to 100km/h in just under 13 seconds, so hats off to Smart for making fuel-efficiency more fun.

My tester was outfitted in base Pure trim, with the mid-grade Passion just above and Prime on top of that. No matter the model a five-speed manual is standard, and it’s a nice little gearbox with good positive engagement and sportier response than the DCT, but then again the alternative dual-clutch automatic is hardly a drag on performance while it’s much smoother than the previous incarnation and provides plenty of hands-on action via standard manual shift capability plus Eco and Sport modes. Therefore your choice will come down to the 0.4 seconds of immediate acceleration, the more connected feel of the manual compared to the convenience of the auto, plus of course the DCT’s $1,400 price bump.

Either way you’ll love the Smart’s maneuverability and handling, the former aided by one of the tightest turning circles I’ve experienced this side of a mini-bike, and the latter fun through the corners. The previous Fortwo was a decent handler too, but the extra width of the new model really makes a difference when pushed hard, the result being surprising agility and very good highway manners thanks to standard Crosswind Assist, important with such a tall, lightweight vehicle. Both curves and straights are made yet more enjoyable when the wheels are upgraded from the standard steel 15s to optional 15- and 16-inch alloys, the steel wheels found on this entry-level tester and the latter experienced with a Sport package-enhanced Passion example I drove a few months ago.

That was a nicely kitted car, but even this base model wasn’t anything to be embarrassed about. The wheels were furnished with decent looking covers, and while I must admit it’s strange to see a Smart with its Tridion safety cell painted body-colour and entirely black to boot, the monotone colour scheme adds to its overall newness.

The mostly black interior was well put together and better finished than the majority of economy cars too, including soft touch surfaces no less. These aren’t the usual synthetics, but rather a stylish thick mesh fabric that covers much of the dash top and instrument panel, whereas the door inserts receive a similar fine woven fabric to the seats. I was half expecting ultra-funky ’60s-era geometric patterned inserts, purple or yellow-green would’ve been fun, but this base model was more stoic in simple black. Smart should offer whacky seat covers for a little visual excitement (they could call them “skins” so the idea doesn’t sound too dated), a good secondary revenue source and great way for buyers to personalize their rides.

Fortunately Smart added a little salt to the pepper with some white lacquered trim on the primary gauge cluster’s hood, the pod-like tachometer/analog clock that juts up out of the dash to the left, and all the circular front vent bezels, while black lacquer was used for the tablet-style infotainment interface and cool retro-looking single-zone auto HVAC controls below. The switchgear is all good, leather-wrapped and metallic topped shifter a nice touch considering the steering wheel is merely polyurethane, and while there’s no soft synthetic surfaces on the door uppers or anywhere else, most of its city car peers don’t bother with such premium refinements either.

Then again, the Smart Fortwo starts at $17,300 plus freight and fees, which isn’t chump change for a two-seat city car. That’s almost exactly the same price as Scion’s iQ, although that model is now deceased so probably not a good example to follow, and considerably lower than Fiat’s near $19k 500, albeit the Italian offers another row of seats, more performance, etc. We could try to compare Mitsubishi’s mid-$12k Mirage and Nissan’s sub-$10k Micra as well, or a number of larger compact models that a priced lower, but in fairness to Smart there’s really nothing quite like the Fortwo.

The parking options it opens up are worthy of ownership outright, while its slightly more upscale interior comes with a few more standard features devoid on base models of its lower priced rivals, such as the cool interior design itself, an upscale digital primary gauge cluster incorporating a 3.5-inch colour TFT multi-information display with an eco score meter and fuel consumption histogram, powered windows (with auto up/down no less), steering wheel controls for voice command, audio, and cruise functions, Bluetooth hands-free with audio streaming, aux and USB inputs, a pretty good sounding stereo, automatic climate control, a centre console with a pullout compartment, a rear hatch power-release, the aforementioned fully-folding front seatback, an alarm, a full assortment of active and passive safety features including airbags for both occupant’s knees, and more.

Most of the Fortwo’s challengers can’t be equipped as nicely either, with available upgrades including auto on/off headlamps, LED driving lights, LED taillights, heated and powered side mirrors, rain-sensing wipers, a leather-wrapped steering wheel, a seven-inch infotainment system featuring a parking camera and navigation with mapping, leather upholstery, heatable seats, a panoramic sunroof, and a cargo cover.

Additionally you can individualize your ride with gloss black, white or silver grille trim, mirror caps finished in the same colour as the exposed Tridion safety cell, the availability of that safety cell in black, white or silver, various alloy wheels, the option of the dash top, door inserts and seat upholstery in black, grey and even bright orange, matte chrome interior door handles, a glasses compartment for the driver, a smartphone cradle that works together with Smart’s Cross Connect app for iOS and select Android phones, and the list goes on, while there’s also an all-new Fortwo Cabrio arriving for the 2017 model year and, if you really want to save the planet and cash at the pump simultaneously, an updated Fortwo Electric Drive is on the way.

A Fortwo story that doesn’t always get told is its safety angle. The Tridion cell already noted provides a very rigid passenger compartment, although this new model has yet to be tested by the IIHS or NHTSA. Last year’s model held up well in NHTSA crash tests, however, its side-impact results a best possible five stars, while frontal and rollover tests were good for the class at four stars each.

Interestingly, as part of the previous model’s launch program, Smart used the example of short and long aluminum ladders to help we journalists understand how something smaller could be stiffer and therefore stronger, the longer ladder twisting much easier under pressure. The same scenario plays out with the Fortwo’s tiny but ultra-stiff high-strength steel intensive body structure, but of course it’s even more rigid than a ladder due to it’s fully enclosed protective cage design.

It’s hard not to like the little Smart, even in its most basic Pure trim line. It comes very well equipped, is fun to drive, is the easiest car possible to park, is ultimately stingy on fuel, and offers up plenty of room for two plus more than enough storage for most peoples’ daily needs, plus it’s cute as a puppy.
©(Copyright Canadian Auto Press)
Car Shopping Tools