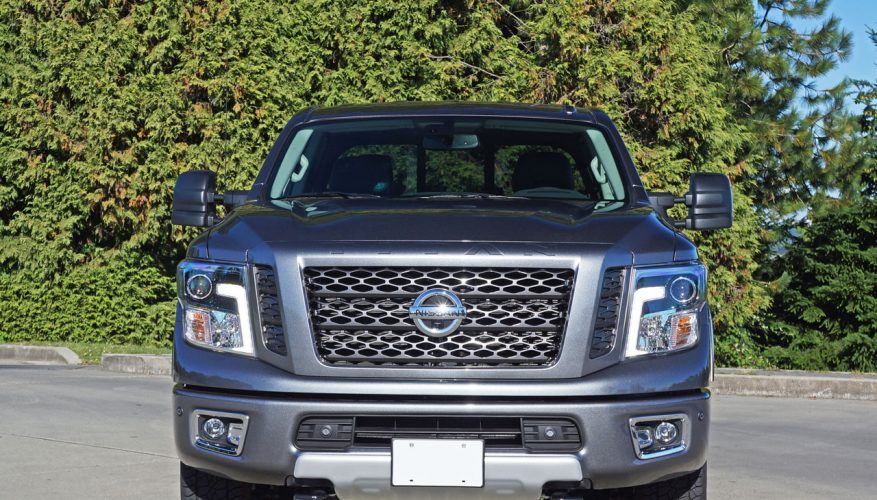 By: Trevor Hofmann
Nissan has made an extremely bold and highly unusual move with the introduction of its completely redesigned 2016 Titan. Rather than merely flashing new styling, improving everything it can and increasing the full-size truck’s dimensions like Toyota did when it brought out its most recent Tundra, Japan’s number two automaker one-upped its primary rival by making its initial offering a diesel-only, heavy-duty half-ton, otherwise called a 5/8-ton or heavy-half by old-school truckers.

Gasoline-powered engines would (and will) follow, a V8 already available and a V6 on the way for 2017, plus other body styles, a regular “Single Cab” just announced, but filling a niche that isn’t openly addressed by its competitors was a great way to get noticed when the updated truck hit the market last year.

Kudos to Nissan management for taking the risk, as they were smart to create some social media buzz and grab headlines with stump-pulling torque and enviable long-haul tow ratings right off the mark, even if it meant initially selling fewer trucks. Their sales are pretty dismal anyway, last year being the worst on record with a scant 12,140 deliveries compared to a high of 86,945 in 2005, two years after the first-gen Titan arrived.

So how is this all-new second-generation Titan selling? Being that no entry-level models are yet available it’s doing quite well, with 7,242 units sold over the first seven months of the year, which puts it slightly higher than last year’s numbers, but once again we’re talking about a very well-equipped base truck that started at $40,290 plus freight and dealer fees when this 2016 model arrived last year and $35,290 since receiving its new standard gasoline-powered V8. Still, while the much improved 2016 Titan is just $1,150 more expensive than the outgoing 2015 Crew Cab, that’s $8,750 more than the base Ford F-150 and even $2,755 more than an F-250, which will no doubt keep its numbers far below the 780,354 F-Series Ford delivered in the U.S. last year (just to put things into perspective). Once Nissan gives us a more complete line-up later this year, which as noted will include a much more basic regular cab work truck, among others, we can do a more accurate apples-to-apples recount.

I’m at least as impressed with the seemingly stoic forbearance Nissan must have required to remain in this brutally competitive truck market despite such achingly slow sales as I am with the new 2016 Titan, the brand’s longsuffering fortitude and more recent diligence resulting in a true pickup truck contender. I just spent a week with a mid-line XD Crew Cab Pro-4X Diesel 4×4, the takeaway terms being “Pro-4X”, “Diesel” and “4×4” because they’re currently all XD Crew Cabs. Without the diesel the Pro-4X starts at $45,970 and with the engine upgrade the window sticker hits a cool $50,970, the Cummins-sourced unit a significant $5,000 premium, while part-time four-wheel drive with a switch-operated two-speed transfer case comes standard in this trim.

Of note, the base DOHC, 32-valve, 5.6-liter Endurance V8 might be identical in configuration and displacement to its predecessor, but that’s where the comparison ends. It now makes 390 horsepower at 5,800 rpm and 401 lb-ft of torque from 4,000 rpm, an improvement of 73 horsepower and 16 lb-ft from a little higher up the rev range when it comes to power, while a segment-first seven-speed automatic benefits fuel economy and performance by two forward gears. It needs every bit of that increased output, mind you, as even the lightest base S 4×2 model weighs in at 6,005 lbs, 900-plus pounds more than the truck it replaces.

Of course, the Cummins diesel upgrade makes all of the new model’s size and weight-gain a moot point, the DOHC, 32-valve, 5.0-liter turbo-diesel V8 good for 310 horsepower and a robust 555 lb-ft of torque from just 1,600 rpm, while it’s hooked up to a rugged Aisin six-speed automatic, this model good for a maximum towing capacity of 11,784 lbs as tested or 12,300 lbs in S 4×2 trim.

It’s been four years since I drove the old Titan, that model a 2012 Crew Cab 4×4 in what was then top-tier SL trim. My big criticism was a lack of body, box and powertrain variants, but that truck’s two cab sizes plus regular and long box make it seem like a smorgasbord of options compared to this 2016. Still, two engines available with 4×2 or 4×4 drivetrains is a good start, and as noted the 2017 model will continue to add body styles and a new entry-level powerplant, plus the new truck also offers a greater array of trims. Like the old model this new one comes in S, SV, Pro-4X and SL guise, but new this year is a top-line Platinum Reserve trim.

Pro-4X trim can also be had with a $1,100 Utility and Audio package that adds 12-speaker Rockford Fosgate audio, a Utili-track bed channel system with four tie-down cleats, LED under-rail bed and tailgate area lights, a power-sliding rear window with a defroster, a bed-mounted 110-volt household-style AC power outlet, plus front and rear parking sensors; a $3,310 Convenience package that adds remote start with “Intelligent” climate control, auto-dimming rearview and driver’s side mirrors, a power tilt and telescopic steering column, driver-side memory, a four-way powered front passenger seat, leather upholstery with contrast stitching, heatable front and rear outboard seats, a heatable steering wheel, NissanConnect Services, and a garage door opener; plus a $1,510 Luxury package that includes memory for the upgraded side mirrors that now feature reverse tilt-down, a 360-degree parking monitor with moving object detection, ventilated front seats, and two storage boxes in the bed; while I certainly could have also used the $420 step rails from the accessories catalog, not to mention a $245 flip-down rear bumper step to make the climb up to the tall pickup’s cab and bed less of a chore.

Once inside it’s easy to see the countless improvements from old to new, the 2016 Titan a thorough modernization in every respect. Those who seek premium-like creature comforts will find more soft-touch surfaces in one of the new top-level GM trucks, these even getting a pliable synthetic glove box lid and more, but most others should be plenty happy with Pro-4X trim when all the extras are added, or one of the other leather-lined Titan examples.

Some highlights include attractive etched metallic inlays across the instrument panel plus a generous helping of satin-silver accent trim throughout the cabin, the exoskeleton-like lower console a real piece of art, while at eye-height a rich looking padded and contrast-stitched leather dash top closely matches the leather-wrapped steering wheel, side and center armrests and seat upholstery, the leather feeling very upscale with perforated inserts to allow three-way forced ventilation on hot days. This, and the three-way seat heaters can be set via the same high-quality chrome-trimmed rotating knob used in other top-line Nissan models, while the rest of the Titan’s switchgear is at least as good as most challengers, but its chrome-rimmed knobs aren’t wrapped in nice grippy rubber like some rivals.

The primary gauges are a combination of stylish chrome and satin-silver metallic dials with a large color multi-information display at center, whereas the touchscreen at dash-central isn’t quite up to the size and high-contrast standards as some competitors, the new Tundra coming to mind. After years of large smartphones, tablets, retina screen laptops, and the like, the Titan’s matte-finish screen filled with uninspired graphics came off a bit tired and dated, while sunlight caused too much glare. The system works well enough, with easy phone setup, loads of functions, accurate navigation and a truly helpful 360-degree parking monitor, so it only loses marks for visibility and style. The Rockford Fosgate audio system loses no marks at all, however, with great sound all-round.

Interior spaciousness goes without question, the cab a one-size-fits-all extravaganza, especially in back where the oft overused term “limousine-like” best describes legroom, while those comfortable rear seats lift upwards to reveal a handy plastic cab-wide cubby featuring a hinged lid that can be flipped forward to expose a flat, carpeted load floor. That’s a lot more useful than the previous truck’s tiny storage compartment on the back quarter of the box, although that innovative feature was 100-percent original and pretty slick when introduced.

Back in the driver’s seat, there’s something about the sound of a Cummins turbo-diesel that makes me feel like another 12 Eaton/Fuller-sourced speeds should be part of the package (or at least another four to seven). It’s got big rig highway truck in its blood, the swirling hollow chamber turbo vortex audio track a fabulous reminder that the new Titan is no poseur. I’ve driven most every kind of heavy-duty pickup from each big-three brand and the XD feels like a slightly lighter and nimbler three-quarter-ton, its acceleration strong, handling quite good, and ride quality impressive.

I’m sure it would’ve felt better loaded up with 1,733 lbs of maximum as-tested payload, my 7,256-lb loaner no doubt riding even smoother; maximum payload is 2,500 lbs, incidentally. Either way the Titan XD is a comfortable truck that took to corners stably and cruised effortlessly on the highway, while it returned fairly good fuel economy all things considered, my easy-does-it weeklong average of almost 18 mpg reasonable enough for something that weighs about as much as a mobile home. Try to find fuel economy numbers on Nissan’s retail site and you’ll come up empty, the Titan XD’s curb weight pushing it outside of light truck classification where such nuisances aren’t necessary.

From a styling standpoint Nissan played it safe, with nothing all that character defining about the Titan other than nice chromed front fender vents that displayed Cummins’ branding on my tester, those fenders nicely muscled up too. Much of the design appears as if inspired by the F-150, which means that it looks good but isn’t about to cause would-be buyers to haul their current half-tons down to their nearest Nissan dealer for the latest, greatest truck from Japan (well, actually Canton, Mississippi), like the 18-wheeler style Ram 1500 did when it took the pickup world by storm back in ’93. Instead, Nissan’s subtler approach appeals to a reasonably sized group of light truck owners that it says require a slightly larger half-ton and somewhat smaller three-quarter-ton pickup (approximately 150,000 full-size truck owners in the U.S.).

If Nissan could eventually pull such Titan numbers it would pass right on by archrival Toyota’s Tundra sales that only achieved 118,880 U.S.-spec units last year, albeit that tally would still by 196,555 units shy of its best ever year in 2007.

After a full week with the 2016 Titan XD Crew Cab Pro-4X Diesel 4×4 I think the 150,000 sales target is doable, especially after Nissan expands the lineup with a new V6-powered rear-drive work truck for 2017 and additional variants as the model matures, but it’ll take time. Nissan has shown its patience, mind you, so long-term success is likely in the cards, while more commercial pickup truck business will also draw greater attention to the brand’s lineup of cargo vans.

All said the new Titan is a win-win proposition for Nissan and “light-duty” pickup truck buyers everywhere, delivering excellent build quality, impressive capability and a unique heavy-half niche that should appeal to those that can’t find the right pickup truck fit for their lifestyle. You really need to try this one on for size.
©(Copyright Canadian Auto Press)
Car Shopping Tools