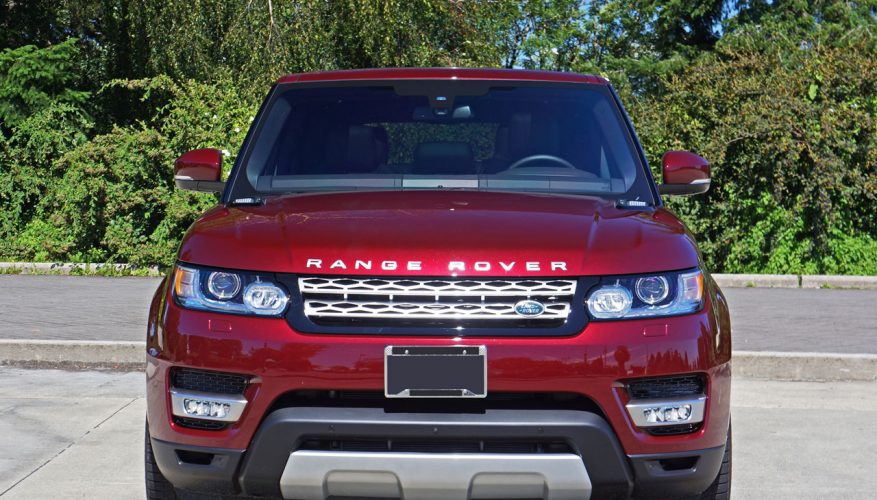 By: Trevor Hofmann
Those that regularly read my scribblings will know I’ve been requesting JLR to empower its enviable lineup of sport-luxury cars and SUVs with diesel propulsion for almost as long as I’ve been reviewing them, and yes that time has finally arrived. Meet the 2016 Range Rover Sport HSE Td6, mostly the same SUV as last year, albeit infused with a much more efficient new heart.

I realize that I’m probably not speaking to the Range Rover Sport V8 Supercharged or SVR owner already enjoying zero to 100km/h times of 5.3 and 4.7 seconds respectively, unless they feel a newfound calling to delve deeper into the wild green yonder and therefore require much-improved fuel economy to do so. While such thriftiness has its merits off-road, most will appreciate the Sport Td6’s impressive 10.6 L/100km city, 8.1 highway and 9.4 combined five-cycle rating even more while attending to their regular daily duties, while its 7.6-second sprint to 100km/h is hardly lacking.

This is a 32-percent advantage over the gasoline-powered V6, while total range goes up by eight percent to a grand total of 1,052 kilometres on a single tank, plus take note that your anti-SUV neighbours had better be criticizing from something more efficient than a V6-powered mid-size sedan, as that’s right about where the new Td6′ emissions register. And just in case you’re spooked by a certain German manufacturer’s diesel scandal, Land Rover made sure its diesels are North American certified by including a special selective catalytic reduction (SCR) system that injects a urea-based fluid into the exhaust flow, plus recirculating low-pressure exhaust-gases (EGR) through an engine-mounted cooler ahead of reentering the combustion chamber. Additional efficiency measures include a low-friction cam-to-cam chain, plus low-friction radial shaft seals, pistons and rings; as well as a two-stage oil pump design, and high-pressure 2000-bar injectors.

Joined up to an eight-speed automatic with paddles it’s a wonderfully smooth and soothingly quiet alternative to gasoline power, while its ability to drive farther between fill-ups improves an important aspect of the luxury experience.

As usual, Land Rover’s legendary four-wheel drive capability with Terrain Response adds confidence whether off-road or on, albeit this particular tester wasn’t outfitted with the optional Extra Duty package that includes the more sophisticated Terrain Response 2 system with additional road/trail settings, a high and low range Twin Speed transfer case, All Terrain Progress Control, and Adaptive Dynamics, so it’s probably best that I kept to paved surfaces, yet even if rain or snow had made things slippery I’m sure it would have remained stably within its lane. I’ve learned this first-hand during mid-winter jaunts up to local ski hills, longer stints to Whistler, and extended runs up and down the Coquihalla in multiple Land Rover and Range Rover models, sometimes traveling over snow, other times taking to fast-paced gravel roads and once even tackling the trail as part of the Land Rover Experience Driving School. No matter the road traveled or its condition the SUV at my command made my work light while keeping everyone onboard ultimately comfortable.

Prior to this 2016 Sport HSE Td6 I tested a near identical 2015 Sport HSE with the model’s base supercharged 3.0-litre gasoline-fueled V6 that’s good for 340 horsepower and 332 lb-ft of torque. It’s fractionally quicker off the line, but its claimed 14.0 L/100km city, 10.5 highway and 12.4 combined fuel economy isn’t quite as appealing, and it’s difficult to argue against 440 lb-ft of 3.0-litre V6 turbo-diesel torque available from just 1,750 rpm when it comes time to tow. To be clear it’s not that the Sport’s 3,500-kilo (7,716-lb) tow rating is any better, but rather that more torque is available lower down the rev range to make throttle application easier and smoother, while all Sport’s are aided by standard trailer stability assist.

On that note don’t be turned off by the Td6’s seemingly low 254 horsepower rating, which is 86 horsepower lower than the base engine, but rather focus on the 108 lb-ft of additional torque. What’s more, you and your passengers will only notice some hushed diesel clatter when idling with the windows opened, engine sound almost imperceptible with the glass sealed thanks to vibration reducing compacted graphite iron engine block construction and layers of sound deadening material attached to the firewall, whereas the auditory sensation at full throttle is similarly pleasing albeit a lower more guttural sound, closer to the supercharged V8.

Ride quality with both trims is excellent thanks to a standard air suspension that also improves handling, the latter being one of the Sport’s key attributes since the model arrived on the scene in 2005 and even more so when it lost some 320 to 360 kilos (700 to 800 lbs) (depending on trim) as part of a new aluminum-intensive 2014 model year diet, this despite gaining 180 mm (7.1 inches) in wheelbase and 100 mm (4.0 inches) overall to a new fully mid-size length of 4,851 mm (191 inches). The updated Sport combines Evoque styling cues with those of the full-size Range Rover, revised the year prior, for a much more rakish profile and arguably more attractive look from front to back.

The base SE starts at $75,990 while HSE trim ups the window sticker to $81,490, my tester starting at $82,990 due to its surprisingly low $1,500 turbo-diesel upgrade, while Range Rover also replaced the standard Zebrano hardwood with Grand Black Veneer and the beige headliner with black, both $400 upgrades. Its two additional options included an absolutely awesome sounding 825-watt 19-speaker Meridian audio system that was worth each and every one of its $1,950, plus a $2,200 Convenience package featuring soft-cinching door closure, a 360-degree surround camera, and automated parking assist, all of which resulted in $7,800 worth of options and an as-tested price of $90,790, excluding freight and dealer fees.

It goes without saying the Sport HSE’s interior was beyond reproach, with nearly every surface covered in soft touch synthetic or padded leather, metal, piano black lacquered hardwood or some other high-end material, only the lowest portions of the door panels and lower console sides done in harder plastic, but it’s purposely applied to withstand wear and tear and even still features a nice soft-painted finish. And it’s not just the quality of the materials used that makes the Range Rover feel so special, but rather the SUV’s substantive weight and solidity. Everything is so incredibly well made, especially the beautifully crafted rubberized metal switchgear. It’s a true cut above any competitive SUV.

On a more practical note the rear outboard seats are sculpted like those up front, and while capable for three, best for two extremely comfortable passengers. There’s no shortage of space so even extremely tall or large folks should feel right at home, while the beautifully finished and fully accommodating cargo compartment benefits from 40/20/40-split folding seatbacks, making for happy warm kids on the way back from the ski hill (remember that rear seat heaters are standard). By the numbers the Sport allows for 874 litres (27.7 cubic feet) of gear toting space behind the rear seat, 489 litres (17.3 cubic feet) of which can be stowed under the retractable tonneau cover, while folding all seats down results in 1,761 litres (62.2 cubic feet) of total luggage capacity.

Most reading this review already appreciate the Range Rover Sport as one of, if not the most impressive SUV in its class, but this Td6 designation brings an entirely new element of efficiency to the model, without noticeably impacting performance. That this turbo-diesel upgrade can be had so inexpensively means the difference can be paid off within the first year if you put on enough miles, or at least shortly thereafter, especially when factoring in cheaper diesel fuel compared to required premium unleaded for the base supercharged V6, making it the obvious choice for those wanting well-equipped HSE trim.
©(Copyright Canadian Auto Press)
Car Shopping Tools