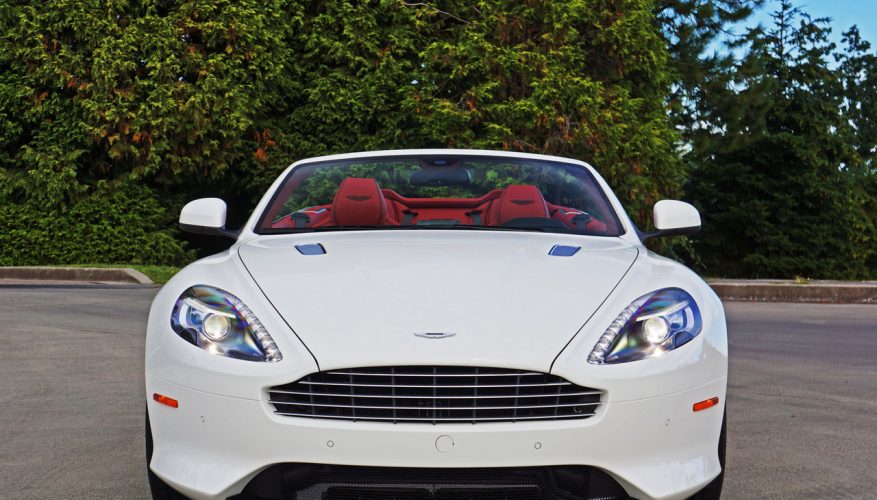 By: Trevor Hofmann
Let’s start out on the right foot. First, I won’t bore you with a description of the DB9 GT Volante’s styling. Let’s just agree it’s stunning from every angle and leave it at that. Second, with respect to this Aston’s other attributes, I’ll try to keep the superlatives to a minimum if you go easy on me in the comments section when I get carried away and wax poetic.

New for 2016, “GT” lettering gets added to the DB9’s derriere to signify some minor styling enhancements, a new instrument panel, and 30 additional horsepower resulting in a very agreeable 540. That, combined with 457 lb-ft torque makes the hardtop zip past 100km/h in 4.5 seconds and the 59-kilo (130-lb) heavier drop-top Volante do so a notch slower, albeit with roof lowered it feels faster, and that’s what really matters right?

Not if you overhear a gathering of university aged kids comparing specs on the latest supercars. I’m not judging, because I did much the same with my friends when I was 20-something even if the cars we bantered about wore names like RS 200, 959, ZR-1, Testarossa, and, what do you know, some nameplates never die although the 911 Turbo hardly needs 4.8 seconds to reach 100km/h anymore. Heck, even today’s base 911 does the deed in 4.6, which brings us back to those boys in the coffee shop and the key fobs on the table.

When I was talking trash with my mates we could barely afford the four glossy car magazines shared between us, but now these young’uns are actually driving the latest Ferraris, Lamborghinis, McLarens and Porsches individualized with aftermarket exhaust, rims, wraps and more (I always feel sad for the poor knob with the M or AMG branded fob). It’s not unusual to see a new 488 GTB with an “N” sticker on its backside, which in my jurisdiction warns other motorists of a new driver. Yes, $300k or so base, 661 horsepower, standstill to 100 in 3.0 seconds, a top speed of 330 km/h (205 mph), and a kid that can barely see over the dash, new driver’s license in pocket, smartphone in right hand and left palm gripping the steering wheel. Yup, time to buy the biggest pickup truck in existence just to stay safe.

An Aston Martin key fob on a similar table is a scarcer sighting, the brand normally eliciting the business of a slightly more mature buyer. After all, even considering there’s a 6.0-litre V12 under this super car’s long, lean hood it’s still 50 percent slower than the Maranello-born supercar just noted, and that’s just too much discrepancy for a frail young ego to accept. Still, as I cruise through Vancouver’s opulent West Side in my Stratus White DB9 GT Volante I realize Aston should’ve named the colour Status White, as it stops passersby in their tracks mid conversation, is supernaturally capable of pulling peoples’ eyeballs away from their phones and into the real world (if only for a moment), and elicits nods of respect from those young guys with the aforementioned supercars as they pull up and stare.

I can understand why. There are so many of the above in my neighbourhood that I hardly take notice when one blasts past, but an Aston Martin cruising by causes a certain reverential awe. And no it’s not because the numbers on some graph rate a given Vantage, Vanquish, Rapide or this DB9 more capable than a 488 GTB, 570S or Turbo S, but rather because the Aston is so undeniably beautiful, makes the most soul stirring sounds, and on a more personal note, pulls such indelibly stamped memories from more than a few unforgettable flings over the circuitous Salinas Highway (SR 68) outside of Monterey, California that I’m immediately transported back to one of the most enjoyable weekends of my career.

The last time I performed the feat was at the wheel of a DB9 Volante sans GT in identical Stratus White paint, incidentally, and while its 6.0-litre V12 merely pushed 470 horsepower and 443 lb-ft of torque through the rear wheels it hardly mattered. It was all about an unquantifiable yet totally real, pure, visceral experience that few cars can match, combined with a luxuriant interior replete with layers of soft, supple leather, even softer suede and deep, rich carpeting, planks of hardwood, chunks of cool (literally) billet aluminum, plus plenty of analog meters and digital displays, a crystal key fob slotted into the centre stack, metal-finished primary gauges spinning the tachometer needle the wrong way just because, a real live handbrake lever at your beck and call albeit to the left of the driver’s seat, powered seat, lumbar, memory, and heatable cushion toggles on each side of the centre console, and big round pushbutton gear selectors on that just noted centre stack, a gear lever unnecessary when paddles are at hand.

This time around the DB9’s hides were Chancellor Red instead of Kestral Tan, and the burl walnut trim was substituted for piano black lacquer. More so, the centre stack has been brought into the modern age for 2016 thanks to the Vanquish that came before with new ovoid control pods filled with touch-sensitive buttons for a clean, uncluttered look, plus Aston’s usual array of solid aluminum knobs. The infotainment display continues to power out of the dash top, A-M way ahead of the curve with this one, although it’s screen size is smaller than most in this category, graphics colourful but uninspired, and overall functionality merely adequate, other than the Garmin-sourced navigation that’s ideally accurate. But really, who cares about so-so infotainment? I’m driving a DB9 and even the stock audio system, which was notably worthy of installation (albeit not the optional Bang & Olufsen upgrade), pales in comparison to the sound of the V12.

As much as my usual quest for the perfect shift beckoned, the DB9’s paddles remaining stationary on the steering column in the proper race-spec way rather than rotating around with the rim, it was an insatiable appetite for backpressure from the twin pipes behind that won over, the barks, burbles and blatts combining for aural overload. I’m tempted to say nothing comes close to those exhaust overtones when joined by an Aston V12’s ferocious snarl, but that’s getting caught up in the moment, as I’ve surely said the same about a Ferrari’s V12, one of Maserati’s V8s, or possibly even the old M3’s V8 (it was really something special). The Aston’s is one of a kind and comparing it to anything else is like trying to decide if Aretha’s got better pipes than Gladys.

With the big V12 singing and the exhaust wailing the DB9’s 245/35ZR20 front and 295/30 rear P Zero dancing shoes do their best interpretation of the king of pop, the car’s graceful form notably more than skin deep when inescapable speed and undulating, curving roadway conjoin. This four-place convertible is hardly lightweight compared to some of the models mentioned earlier, but it’s wonderfully agile nonetheless, and where other long wheelbase convertibles creak and groan as they shimmy and shudder over pavement imperfections or bridge expansion joints the DB9 GT Volante’s bonded aluminum body shell remains ridiculously rigid despite its dozen years of development.

Yes, the basic VH platform architecture has been with us a long time, and while Aston 2+2 fans look forward to spending quality time in next year’s DB11, the DB9’s undercarriage is with us in the here and now and fully up to task. It comes down to good initial design, the result being a model with a great deal longer shelf life than otherwise possible, while the DB9’s cloth soft top, which was deemed an anachronism by some when retractable hardtops were all the rage, is actually back in vogue thanks to less weight and a smaller stowage requirement. It’s near coupe-like silent at high speed too, and powers up or down in just 17 seconds, while Aston has finished the underside in decadent suede, mine coloured red no less, just like the windshield frame and cross member, and the fabulous little sunvisors that also benefit from exquisitely detailed aluminum trim. The workmanship is incredible.

Of course the Volante is made safer from a reinforced windshield frame and twin pop-up roll bars hidden behind the rear seats that deploy if sensors detect an imminent rollover. The way the DB9 takes to corners makes such thoughts seemingly preposterous, but better safe than sorry. It should be noted that this convertible’s suspension is slightly softer than its hardtop sibling too, with gentler springs and a narrower front stabilizer bar, plus the bar in the rear is removed altogether.

No matter, as the front Pirellis are as wonderfully communicative as they’re tractably obedient to turn-in, whereas the six-piston front calipers framed by stunning spindle-thin alloys are even more amenable to brake pressure, the Volante’s stopping power so immediate it borders on violent.

The dampers are adaptive, by the way, with a separate button allowing a firmer or more compliant setting depending on road conditions, even if Sport mode is chosen, or for that matter vice versa. And the default suspension mode allows for a comfortable ride over all but the most obnoxious tarmac, the DB9 a car you can easily drive every day, unlike those weekend warriors mentioned earlier.

Speaking of weekends, a small trunk allows for some well packed luggage, or even more if you remove the smartly packaged wind blocker, plus if you’d like to charge your laptop while driving, Aston provides a 12-volt plug within the cargo compartment. A hefty billet aluminum protective plate is particularly nice, as is the rich carpeting, all of which was in sharp contrast to the engine bay that’s positively understated in its matte aluminum finish, not the polished aluminum I was expecting. Don’t get me wrong as it’s still an appreciatively exposed mechanical marvel in a world of unreal plastic engine shrouds, but it came across as more ready for work than time for play.

I suppose that last point wraps my thoughts up nicely. The DB9 GT Volante is a super car that can comfortably jet you back and forth to your downtown office each day, ahead of quick sprints to your favourite weekend getaways; so much time spent with this car almost too blissful a thought for the mind to comprehend.

If you have the means, its base price $244,295 and as-tested at $266,530 plus freight and fees, you owe it to yourself to partake, as few cars combine as much seat of the pants feel with breathtaking performance, unabashed opulence, legendary pedigree and beautiful design. You might get there faster in one of the boy toys, but you won’t enjoy the journey any more.