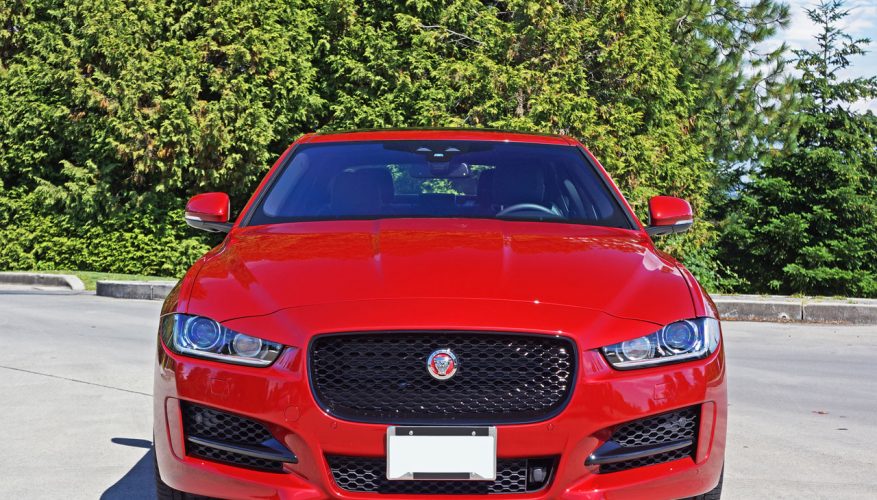 By: Trevor Hofmann
Which luxury brand builds the best D-segment sport sedan? For decades the benchmark has been BMW’s 3 Series, with Mercedes’ C-Class and Audi’s A4 sometimes doing as good a job or better, plus others like the Infiniti Q50, Lexus IS and Cadillac ATS nipping at their collective German heels, but Jaguar has been a relative no-show.

OK, the X-Type showed up in 2001 and lived on until 2009, but it was a relatively weak effort based on the Euro-spec Ford Mondeo family sedan that didn’t inure much passion from the brand faithful, nor anyone else for that matter. Such memories will soon be forgotten, however, much thanks to the all-new XE.

To clear up the past and bring you right up to speed, Jaguar changed hands just before the X-Type was cancelled, Ford’s now defunct Premier Automotive Group (PAG) entrusting the revered brand to the now highly respected hands of Mr. Ratan Tata and his India-based Tata Motors group. Much needed funds were poured into the independently “soft touch” run Coventry, UK division, allowing the development and production of cars it had always wanted to build but couldn’t when under the PAG umbrella, which having Aston Martin as its pinnacle brand kept Jaguar in performance shackles. Soon Jaguar’s sports models outpaced the Astons and development started on all-new highly advanced models that would once again show the world the leaping cat remained a force to be reckoned with.

That attitude is what differentiates the new XE from its peers. Another brand lays claim to the 4DSC trademark, but Jaguar is now in possession of the four-door sports car. An upstart that’s a more capable performer than the aforementioned list of veteran sport sedans? Only a side-by-side comparison on a closed circuit could determine, but after a focused stint behind the wheel of an amply equipped 35t AWD R-Sport I’m willing to bet that if the XE didn’t come out on top it would be a close finish.

Before delving into all that makes the XE special I need to make mention of a two-seat sports car that gives Porsche’s 911 regular migraines, Jaguar’s F-Type. The beautiful coupe and convertible combo is the literal type of car Jaguar wanted to build but couldn’t whilst in Ford’s clutches, and my reason for bringing it up has to do with what’s under the skin, and the skin itself. JLR’s new aluminum-intensive iQ modular platform is spiritually inherited from the full-size XJ, and now benefits this XE and the fabulous F-Pace utility that shares much of the sport sedan’s underpinnings, plus will soon improve the mid-size XF and an upcoming F-Pace-sized Range Rover model.

The XE enters the D-segment as the only bonded and riveted aluminum built car, 75 percent of which is sourced from recycled materials. Aluminum reduces weight, but at least as importantly it strengthens the body to improve road-holding, NVH levels and crash protection. Notably the XE’s front and rear crash structures, plus key body panels, are bolted in place to reduce repair time and costs. What’s more, Jaguar even integrated sacrificial slipping fixings within the suspension design to prevent pricey components from getting bent or broken if hit by curbs.

The chassis incorporates a similar aluminum double wishbone setup to the F-Pace and F-Type in front, but the two new models incorporate an entirely new subframe-mounted multi-link system in the rear, dubbed Integral Link. According to Jaguar its pricier to produce yet allows for more tuning potential, and after some time behind the wheel it quickly became apparent this advanced suspension and lightweight, ultra-rigid body shell combination was worth every pre-Brexit quid.

Now the five-seater that rolls out of Solihull, West Midlands assembly, the same plant that once produced the wonderful Rover P6, drives more like that F-Type than any Jaguar since. Truly, this is the car that takes it to the 3 Series. A car that provides otherworldly levels of grip combined with outrageously reactive, positively precise steering, both making up for less feel than optimal. Like the F-Pace SUV I drove previously my XE tester was stuffed full of 3.0-litre supercharged V6 and paddle-shift actuated eight-speed automatic for straight-line jab and hook performance that matches this four-door’s ability to duck and slip. The 35t boasts 340 horsepower and 332 lb-ft of torque, and while strangely muted compared to the snarling growl of the F-Pace it packed more punch due to its lighter frame, resulting in 5.4 seconds to 100km/h and an electronically limited top speed of 250 km/h (155 mph) with Dynamic sport mode engaged.

The eight-speed auto and sport-tuned all-wheel drive come standard with our Canadian-spec XE, a six-speed manual and rear-wheel drive standard in other markets, while Jaguar’s Intelligent Driveline Dynamics software improves handling by minimizing understeer. Added to that my tester featured R-Sport trim with optional 20-inch alloys as well as an adaptive suspension.

You might think such a sporting car would pummel occupants with overly aggressive suspension tuning, yet while my XE tester was firm it was hardly punishing with ample wheel travel for enjoyable city and highway cruising. That’s one of the wonders of a stiff body structure, its overall rigidity permitting a little more play in the undercarriage without losing performance.

All this allows one of the segment’s sportiest sedans to simultaneously deliver a thoroughly luxurious experience when not pushing the envelope, the XE’s interior a gluttonous feast for the eyes of not the tactile senses. My tester was done out in stunning red on black leather, the red affecting the door and seat inserts as well as contrast stitching found throughout the cabin. Fabulously contoured sport seats aside, a stitched leather instrument panel is one of those over-the-top excesses we’ve come to expect of Jaguar yet get all giddy about when offered by one of its rivals, which makes the hard plastic primary gauge hood such a shocking disappointment. Jaguar impresses with soft touch door uppers, leather inserts and armrests, however, plus superbly crafted switchgear, beautiful piano black lacquered surfaces and gorgeous metal trim, as well as one of the nicer leather-wrapped sport steering wheels in the industry, but then more hard plastic can be found on the dash top, below front occupants’ knees including the glove box lid, and once again on the lower door panels and even the dull looking speaker grilles. Despite not having the cleanest mould extrusions, at least the door pockets are velvet lined, but only the A pillars are fabric-wrapped.

Fortunately Jaguar invested in state-of-the-art high-resolution full-colour electronic interfaces, the primary instruments not fully digital like those in the top-line F-Pace, but still nicely organized with a set of metal-rimmed analog dials flanking an extremely comprehensive multi-information display, while the widescreen infotainment touchscreen over the centre stack is a real thing of beauty. Like the F-Pace and other JLR products, the 8.0-inch InControl Touch monitor features scenic graphics including a classic red British phone booth for Bluetooth phone connectivity, text messaging and audio streaming, a backup camera with dynamic guidelines, navigation with 3D mapping, and all the usual audio controls that feed a standard Meridian stereo.

As good as this is it’s all upstaged by the single item that will make your colleagues feel like their German rides are seriously lacking, a rotating gear selector that powers up out of its flush-mounted dormant state upon ignition. Talk about a sense of occasion, this is the type of feature that today’s gadget geek loves while effectively freeing up a lot of space from the lower console too. It’s joined by a row of buttons highlighted with a waving checkered flag just behind, that last one for engaging aforementioned Dynamic mode, whereas most of the others are for Normal, Eco and Snow modes. An expected electromechanical parking brake resides close by, while you need to go back up to the dual-zone HVAC interface on the centre stack to power the three-way heatable seats.

All these features in mind, what exactly does $45,000 for the base XE Premium buy you, or for that matter $57,500 for the 35t R-Sport I drove? The former number starts with one of the most progressive entry-level engines in the class, a fuel-efficient 180 horsepower 2.0-litre turbo-diesel with 318 lb-ft of torque available from as low as 1,750 rpm that’s good for a sub-8.0-second sprint to 100km/h, and then on top of that base trim includes most expected D-segment features as well as some unexpected items like standard driver’s side memory, power-folding auto-dimming side mirrors, a garage door opener, a rearview camera (ok, that should be expected but it’s not always standard with competitors), 380-watt 11-speaker Meridian audio, and a handy 40/20/40-split rear seatback that makes the already sizable 450-litre (15.9 cubic-foot) trunk much more utile.

Both engines are available with Prestige trim too, which for $49,500 with the 20d and $53,000 with the 35t ups content to include contrast-stitched Taurus leather upholstery, heated front seats and steering wheel, four-way powered lumbar support, powered tilt and telescopic steering, Jaguar InControl Apps, proximity access, and more, while as-tested R-Sport trim adds a sportier aero body kit, adaptive HID headlamps with signature LED DRLs and auto high beams, metal doorsill plates, an R-Sport steering wheel, satellite radio, front and rear parking sensors, blindspot monitoring with closing vehicle sensing and rear cross-traffic detection, lane keep assist, autonomous braking, and driver condition monitoring for $54,000 with the base engine and $57,500 as-tested, while my loaner’s 20-inch Propeller 10-spoke alloys added $1,500, its Italian Racing Red paint another $600 (and don’t worry traditionalists, British Racing Green is also on the menu), and the red leather inserts no charge (you can go all black, cream or blue too).

My test car also included a $350 Black Pack that replaced standard chrome with glossy black for the grille surround and insert, the “blades” in the lower fascia and the front fender vent trim; plus a $2,600 Tech Pack with navigation and an upgraded 17-speaker Meridian sound system; a $400 standalone heatable front windshield; plus as noted the suspension was upgraded with $1,000 Adaptive Dynamics.

To be honest I’m not too happy about the XE’s disappointingly low-grade plastic bits and lack of B- and C-pillar fabric, but even my annoyingly fastidious nature couldn’t turn me off this superb sports sedan. Its stunning styling had me at hello and the way it drives keeps the love alive. Yes, even enough to overlook its comparatively minor faults. I recommend you give the XE a try.
©(Copyright Canadian Auto Press)
Car Shopping Tools