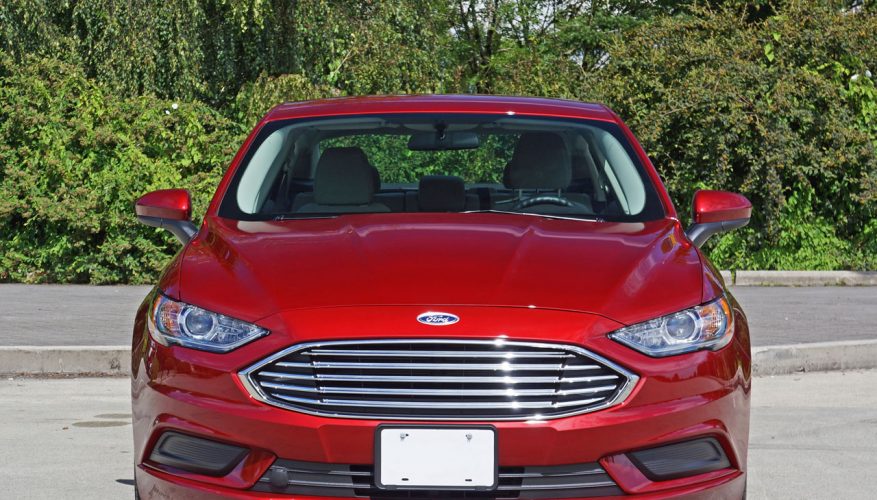 By: Trevor Hofmann
The Fusion has always been a strong seller for Ford, although the second-generation model introduced four years ago took the model’s popularity to new heights, even achieving bestselling status in the mid-size segment here in Canada. While since giving the top podium up to a redesigned Camry the good folks in Oakville, Ontario’s blue-oval HQ are hoping this refreshed Fusion might push it back over the top.

If it were based solely on styling the Fusion certainly has the edge, the new 2017 getting some subtle yet very nice improvements to its design, from a faintly reworked grille, more angular headlamps and a revised lower fascia to classier LED taillights incorporating ritzy chrome strikethroughs that continue right across the car’s backside, but there’s much more than merely a new set of clothes behind Ford’s latest attempt to grow the Fusion’s mid-size market share.

It’s attacking its competitors from every angle. The new all-wheel drive 325 horsepower twin-turbocharged Sport V6 road rocket might be getting all the headlines, but the Fusion also continues forward with one of the cleanest and most efficient plug-in hybrid models the segment has to offer, plus an all-new near premium luxury variant along with one of the more fuel-efficient regular hybrids in the class, not to mention a variety of engines and trims in between. Yes, Ford has the mid-size sedan segment completely covered with its Fusion Sport V6, Energi, Platinum, Hybrid, and the list goes on.

While the thought of spending time in a Sport V6 might be tempting, I chose the regular Hybrid as my first 2017 Fusion tester as it represents one of the more popular electrified offerings available. The S is the most basic Fusion Hybrid from a wide and varied lineup that also includes SE, Titanium and Platinum trims (not including the plug-in Energi variants), starting at just $26,670 plus freight and dealer fees, this price undercutting each and every one of its mid-size peers from the next cheapest by more than $2,000 to the priciest by almost $3,500. That it also achieves second-best fuel economy ratings is almost as impressive, Ford claiming 5.5 L/100km city, 5.7 highway and 5.6 combined, compared to 5.6 L/100km combined for the $29,649 base Hyundai Sonata Hybrid, 5.9 for the $29,550 Toyota Camry Hybrid, 6.3 for the $30,095 Kia Optima Hybrid, and 5.0 flat for the new $28,850 Chevy Malibu Hybrid. Oh well, can’t win ’em all.

Still, just like it’s not all about the best possible fuel economy it’s also not simply about the best base price, a great deal more going into the purchasing decision of any new car, or at least one hopes so. Another attribute that keeps Fusion customers coming back is interior design and execution, not to mention sheer size. It’s a big car that results in one of the most accommodating and comfortable cabins in the segment, especially in back, while even this base Fusion S Hybrid gets dressed up with more soft touch synthetic surfaces than most rivals for a near premium experience.

Additional highlights include a beautifully detailed SmartGauge primary cluster integrating the usual gear selector, speed and fuel meters as well as dual 4.2-inch configurable LCD displays for managing battery replenishment by using its Brake Coach to employing its Engage and Empower modes plus more, while Ford’s graphically motivating animated growing or falling “Efficiency Leaves” really make you think about the environmental impact of each trip taken.

The wow factor of the gauge cluster causes a bit of a letdown as eyes turn to the centre stack where the base model gets one of the more underwhelming infotainment systems in the class. It’s full colour and high-resolution but desperately small, and if it didn’t also boast Sync wireless phone connectivity, enhanced voice recognition, a reverse camera with active guidelines, and other functions I’d call it a pretty decent display audio system with nine speakers, AM, FM, CD, MP3, etcetera and leave it at that. Still, we need to be fair and remember the $2k-plus this entry-level Fusion S Hybrid model saves over the base Malibu Hybrid and its seven-inch tablet-style infotainment touchscreen, and also take note that Ford makes Sync 3, one of the industry’s best infotainment systems, available in its upper crust trims.

The rest of the centre stack is well designed with switchgear that surpasses many premium branded luxury models, including some of the tightest fitting, best damped buttons anywhere. Likewise the chrome-rimmed knobs get nice rubberized edges for excellent grip, even while wearing winter gloves, while dual-zone auto climate control is standard across the hybrid line.

Something new and rare inside is a rotary gearshift dial, an innovative idea we first saw from Jaguar and then in Chrysler group products. It frees space from the lower console for things we need like a slot for smartphones and looks pretty impressive, while it’s ultra-easy to use as well. There’s no fiddling with a shift lever to find the right gears like some electronic gearboxes demand, but rather a quick twist of the beautifully detailed etched metal and gloss black dial let’s you choose the usual P, R, N, D and L selections, the latter one actuated by pressing a button at centre.

Once in Drive with the electromechanical parking brake released it’s much like last year’s Fusion Hybrid, meaning wonderfully smooth, amply powerful when called upon and plenty efficient as noted, although the engine seems to drone a little louder than I remember. I must say I didn’t really miss the manual mode thumb toggle switch on the old shift lever, but not because Ford added paddles to the steering wheel. The eCVT isn’t really designed for performance driving so DIY mode is hardly needed, the reprogrammed continuously variable unit doing an admirable job of mimicking shift changes while delivering the kind of silky operation buyers in this class appreciate more often than not anyway.

The 2.0-litre Atkinson-cycle four-cylinder produces a maximum of 141 horsepower and 129 lb-ft of torque on its own, but combined with its 35 kWh electric drive motor and 1.4 kWh lithium-ion battery the power unit’s total output jumps to 188 net horsepower during normal conditions and 195 when a quick sprint from standstill is required or a passing procedure needs to be executed as quickly as possible. Alternatively it can drive under electric-only power for extended periods, which is one of the reasons its fuel economy is so good.

Four-wheel discs with ABS and the HEV sector’s usual regenerative braking makes for short controlled stops, the latter technology improved with a software upgrade for more natural feel, while this base S model takes to curves with plenty of verve thanks to a fully independent suspension riding on standard 17-inch alloys and 225/50R17 all-seasons. Again, its handling is nice, but the Fusion S Hybrid is more about comfort and to that end it delivers a wonderfully compliant ride both around town and on the highway, where it would no doubt be a capable cruising companion for a day’s worth of errands or a weeklong road trip.

It really is comfortable, my driver’s seat not including powered adjustment but nevertheless inherently supportive in all the right places, while the seats in back are at least as good with superb lower back support. With the driver’s seat positioned for my five-foot-eight body I had about six inches ahead of my knees when seated behind, plus around three inches above my head and plenty of room from side to side. The centre seat is fairly flat, providing a comfy perch for a third passenger, and while this model doesn’t get a centre armrest it’s as nicely finished in back as it is up front, the side armrests even detailed out in padded contrast-stitched leatherette.

The standard cloth upholstery is attractive and plush while its Ebony Stone beige hue was a refreshing change from the usual black and complemented its Ruby Red exterior paint nicely, the latter a $450 upgrade but the former standard with this colour choice. Ford offers an eight-colour palette and a black interior as well, while other options include $300 remote start, $250 inflatable rear seatbelts, $150 all-weather floor mats, a $100 block heater, a $40 trunk cargo net, and that’s about it in this trim.

Of course there are plenty of accessories available from your dealer and the sky’s the limit if you move up into one of the aforementioned trims, the Platinum Hybrid nearing premium territory with a gorgeous mesh grille, special 19-inch alloys, opulent quilted leather, and every available driving aid and active safety feature for an IIHS Top Safety Pick Plus rating, but we’ll leave all of its details to a future review. More reflective of the model tested, all Fusion trims earn a five-star NHTSA safety rating.

Being that Ford is touting the new 2017 Fusion as one of the more technologically advanced mid-size cars on the market I should expand on some features available throughout the Fusion Hybrid range, such as the aforementioned eight-inch Sync 3 infotainment system, adaptive cruise control, auto-dimming high beams, Enhanced Park Assist with perpendicular or parallel parking capability, blindspot monitoring with rear cross-traffic alert, and two-tier lane keeping assist that first vibrates the steering wheel and then, if you don’t react, steers the car back into your chosen lane before suggesting you take a nap.

Another feature worth expanding on is standard MyKey, which can be used to limit valet drivers or your own darling teens from exceeding 128 km/h, with speed minders chiming in at 72, 88, and 104 km/h increments, keep the audio system volume to 45 percent of its maximum capability, providing a low fuel warning sooner, and more.

Also notable are 60/40-split rear seatbacks that make the most of the shrunken trunk. At 340 litres (12.0 cubic feet) it’s bigger than some of its rivals, mind you, although losing 113 litres (4.0 cubic feet) from the conventionally powered car’s cargo capacity might be challenging for diehard golfers to get used to. The rear seat pass-through is smaller than the regular Fusion’s too, but the battery that gets in the way is at least flat on top so you get better use of the space than some competitors, all in all the Fusion Hybrid’s trunk one of the more useful in the mid-size HEV segment.

I’m not going to say the Fusion S Hybrid is my class favourite, but once getting past the outdated infotainment interface I found the rest of the car very impressive. The S Hybrid’s low price point will no doubt pull many prospective buyers into Ford showrooms to take a closer look, at which time those who live on their smartphones (hopefully not while driving) will most likely upgrade to a pricier more feature filled model with the larger touchscreen while others that find their old flip-phone just fine will be more than happy with the base model. This strategy could give the Fusion Hybrid a big advantage over rivals that charge more for additional base tech.

In a nutshell the clear message is that Ford has something for each and every mid-size sedan buyer, from the price sensitive to luxury elites, technophobes to whiz kids, ultra-green plug-in types to no holds barred performance enthusiasts, and everyone in between. The Fusion is a one-stop shopping experience that truly impresses, even in its lowest trims.