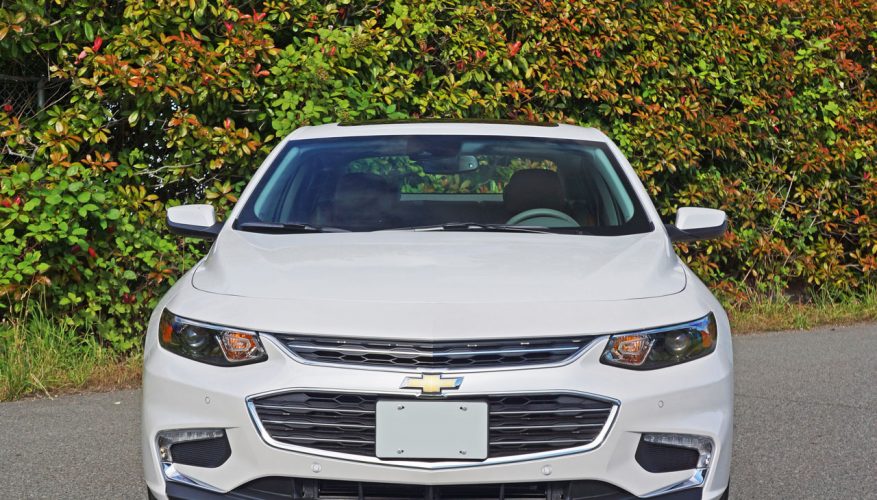 By: Trevor Hofmann
Chevy’s ninth generation Malibu is doing well, with Canadian sales up 17 percent over the first six months of the year. This was enough for new owners to wave goodbye through the car’s sleek new side windows as it passed right on by Chrysler 200 and Hyundai Sonata sales, with the Malibu’s new count of 6,417 Q2 deliveries starting to catch the taillights of the mid-size sedan segment’s third most popular Honda Accord and second place Ford Fusion.

Despite a general waning of HEV, PHEV and EV sales due to lower pump prices in most parts of Canada, I’d like to think the new Malibu Hybrid is playing a significant role in the mid-size model’s upwardly trending numbers, although its charged particle assistance likely has more to do with a positive green light being shined on the enduring nameplate than particularly high sales volumes. This is, after all, is the first Malibu Hybrid that can drive on electricity alone, its modified powertrain borrowed from GM’s second-generation Voltec series plug-in hybrid system, normally found in the bowtie brand’s Volt, and until recently the Cadillac ELR.

Look as long as you want and you won’t find a second “fuel” door for an SAE J1772 connector plug, as the modification mentioned a moment ago refers to this model’s non-plug-in status, the new Malibu Hybrid a regular HEV utilizing the Voltec two-motor hybrid system albeit combining it with a 300-cc larger 1.8-litre four-cylinder engine and smaller trunk-mounted 80-cell 1.5 kWh air-cooled lithium-ion battery pack. The internal combustion portion of the pairing produces 124 horsepower and 129 lb-ft of torque, but mixing in the electric motor results in total combined output of 182 horsepower and 277 lb-ft of torque, for spirited acceleration.

Before you get all pumped up about the hybrid’s 17 lb-ft advantage over the top-line conventionally powered Malibu Premier’s 260 lb-ft of twist, I’ve driven both and the 2.0-litre turbocharged car’s 250 horsepower makes for a lot more zing off the line and everywhere else, but this said you shouldn’t feel hard done by if relegated to this eco variant, especially when it comes to fuel economy.

At a sale price of $1.129 per litre, the lowest I’ve seen in my part of the country since winter of last year, the pump clicked off at a mere $16, and that was after a very busy week of driving. After doing the usual calculations my weeklong average dipped into the high 4 L/100km territory, which was actually a bit better than Chevy’s claimed rating of 5.1 combined city/highway (or 5.0/5.1 respectively).

That’s best-in-class efficiency by the way, the new 2017 Ford Fusion Hybrid said to be good for 5.6 L/100km combined city/highway, the 2016 Hyundai Sonata Hybrid not quite as thrifty at 5.6 or 5.8, depending on trim, the 2016 Toyota Camry Hybrid also trim dependent albeit not as stingy anyway at 5.9 or 6.0, and the Kia Optima Hybrid least efficient with trim respective numbers equaling 6.3 and 6.5 L/100km. The Malibu Hybrid even beats the smaller compact Volkswagen Jetta Hybrid’s 5.3 L/100km combined rating.

A weight loss program that resulted in the shedding of 136 kilos (300 lbs) aside, if I were looking at one single reason for this overachieving personality I’d have to point to its EV ability, the Malibu Hybrid capable of electric-only propulsion up to 85 km/h, which is much higher than the class average. Of course you’ll need to have charged up the battery through lots of regenerative braking before attempting such a feat, but even without paying much attention to brake use I regularly experienced pure EV motive power off the line, if light on the throttle, and enjoyed silent electric motoring in the 30 to 65 km/h range quite often. By comparison most competitors relieve themselves of sole-electric propulsion at around 20 km/h, so it only makes sense the Chevy is friendlier on fuel.

I should also mention the powertrain is the first in Chevy’s lineup to use Exhaust Gas Heat Recovery (EGHR), which means exhaust heat warms the engine as well as the cabin, reducing engine warm-up times while making cold-weather fuel economy more consistent.

The Malibu Hybrid transitions from 100-percent electric to mixed mode almost imperceptibly, although that’s with the windows up. At idle with the windows lowered it sounded like a spaceship, and no I didn’t notice this while tuning in Coast to Coast AM or Midnight in the Desert during the wee hours (get well Art). The eerie note might be the electric motor or an EV-mode pedestrian warning tone, Chevy’s press material doesn’t say, but nevertheless it soon melded with the surrounding white noise of city life and was mostly forgotten throughout the rest of the week. I truly wondered about my sanity when I started hearing the sound of a moped out my side window, mind you. Once again with the windows down I could hear a distinct scooter engine-like buzzing sound that wound up when gaining speed and then tapered off when slowing down. Being a big F1 fan I’ve learned hybrids aren’t always the best way to make a car sound exciting, but this is an entirely new level of lame. Considering that a Maserati V8 has been clinically proven to woo the fairer sex the Malibu Hybrid has got to be a mechanical turn-off. On second thought, this is the car we should all buy for our teenage boys.

This in mind the Malibu can be had with “Teen Driver”, a feature that automatically activates safety features while also managing speed warnings, radio volume limits, and more, plus it provides a driving habit history. I’m certainly glad this wasn’t available when I was 16.

Those regularly hooked up to their big screen smartphones and tablets will like the Malibu’s graphic interfaces, my top-line tester featuring a large colour multi-information display within an extremely attractive gauge cluster, the left dial filled with real-time efficiency and charging info instead of the usual tachometer, while Chevy has gone to the popular tablet-style infotainment touchscreen atop the dash for improved visibility while driving plus superb resolution, rich colours and contrast on my tester’s upgraded eight-inch display (the base model gets a seven-inch unit), plus the rearview camera provides handy guidelines for pinpointing parking maneuvers. Chevrolet MyLink is also easy to set up and use thanks in part to Apple CarPlay and Android Auto compatibility.

My car’s audio was upgraded to a nine-speaker Bose system that produced superb sound, while standard satellite radio provided endless coverage of the U.S. election, all other subjects (are there any?) or genres of music available, while other standard features include passive access and pushbutton ignition, an electromechanical parking brake, tilt and telescopic steering, a multifunction steering wheel with cruise control, dual-zone auto HVAC, OnStar telematics, tire pressure monitoring, all the usual active and passive safety features plus a higher than average count of 10 airbags, 17-inch alloys on 225/55R17 all-seasons, and much more.

Even though it’s a hybrid with a fairly large battery (allowing the EV range and fuel economy mentioned earlier) you still get the convenience of standard 60/40 split-folding rear seatbacks that expand a somewhat abbreviated 328-litre (11.6 cubic-foot) trunk via a narrow bulkhead passageway. Hey, as long as I can load in my family’s skis, the Malibu gets my seal of approval.

OK, I’m a slightly harsher critic than that, but I must admit the new Malibu passes most other criteria with flying colours. For those obsessed with the tap test it’s mostly above par, Chevy choosing to finish some dash and door panel surfaces in harder albeit soft-painted plastics that competitors usually cover in soft touch synthetics, but the key points they’ve opted to make soft and cushy are raised to new levels of premium-like pampering. I’m ok with the tradeoff as the leather-like detailing on the dash, doors and console combines for a truly upscale ambiance, and yes you heard that right, the lower console edges set a much higher standard than the class average. This is joined by gorgeous satin-silver metallic trim highlighting other key areas, plus nice glossy inlays that aren’t even trying to look like faux wood or carbon, just a nondescript geometric pattern that I happen to like. Good job Chevy.

All other trims get a five-star safety rating from the NHTSA, by the way, while the Malibu is the highest ranked mid-size car in J.D. Power’s latest 2016 Vehicle Dependability Study, the Chevrolet brand also doing well with a second-place rating for full-line mainstream volume brands (GM’s SUV/truck brand, GMC, otherwise took second). Chevy ranked fifth in the same third party analytical firm’s 2016 Initial Quality Study, albeit the Malibu wasn’t recognized in its segment, while GM would probably want me to overlook Consumer Reports’ findings, their 2016 report card on reliability ranking Chevrolet eighth out of 11 full-line brands with the only bowtie model to win its category being the larger Impala.

At least the new Malibu looks like its larger sibling, a good thing in my books. Its wheelbase doesn’t quite stretch to the bigger sedan’s dimensions, but Malibu nevertheless delivers more comfortable rear seating with increased legroom, another reason why it’s selling so well compared to its much maligned predecessor. If you’re in the market for a mid-size family sedan, and about half as many Canadians per capita are in comparison to our friends to the south, the Malibu is a good bet, and thanks to this electrified version’s fabulous fuel economy it’s probably worth its slightly elevated price of entry.

That price would be $28,850 plus freight and dealer fees, or about $3,600 more than the slightly less equipped Malibu LT. Only you can decide if its HEV powertrain, electromechanical parking brake, dual-zone auto HVAC, tire inflation kit, and stylized blue “H” badge is money well spent, but it’s a very good car either way. It ups interior refinement over the Camry Hybrid, is a smoother operator than either the Sonata Hybrid or Optima Hybrid’s single-motor HEV system, and critically takes the much-revered title for best-in-class fuel economy from the Fusion Hybrid.